I woke up the morning after our epic walk from Sgurr na Ciche to Gairich surprisingly unstiff but feeling fatigued.  The morning greeted us with a spectacular sunrise. 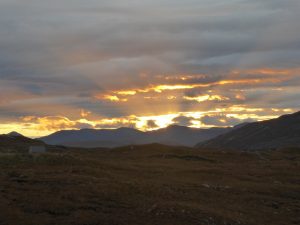 It was cloudy but the clouds were well over the summits.  We prepared our breakfast al fresco – porridge and tea in my case.  The story of our previous day can be found here.

Tzvetie was determined to bag some more Munros.  I am sure that I would have been happy to go to the nearest tea shop (probably some distance away) or amble up a nearby bump instead.  The obvious Munros were Gleouraich and Spidean Mialach and/or Sgurr a’Mhaoraich.  I compromised with her by agreeing that we would not try to combine all three Munros!

Breakfast over we drove the short distance to just beyond the bridge over the northern arm of Loch Quoich.  Hidden amongst the rhododendron bushes is the start of one of the best stalker’s paths in the Highlands.  It lifts you easily up the southern arm of Gleouraich giving spectacular views along Loch Quoich to Sgurr na Ciche and the other hills we had been on in the previous days and along an airy highway above the arm of Loch Quoich.

It ends at a pony stance from where a rough path climbs steeply up the final 200m (660ft) of ascent to the summit.  This was my fourth ascent of this hill.

The summit is a grand viewpoint.  We could also see Sgurr a’Mhaoraich, Bein Sgritheall and distant Skye to the west.

The South Glen Shiel ridge to the north and even a mist covered Ben Nevis to the south east.

From Gleouraich a ridge leads east over a subsidiary top from where this shot was taken back to the main summit of Gleouraich.

And on towards the rather bland slopes of Spidean Mialach after a significant drop in height.

Here are some pics from the top of Spidean Mialach.  It was noon when we got there.

Now the sun was out and producing a little warmth.  We lounged around on this top for a while.  There is a path all the way down from the summit to the road.  As we neared the road we encountered a group of 4 guys just starting out up Spidean Mialach, perhaps a bit late in the day considering it was October.

We were back at our cars after a round of 6 hours and drove back to Fort William where we treated ourselves to a pizza.  Then I drove down to the Lake District for an appointment the following day in Ambleside!