Following my last blog on January 2019’s Sidley expedition, this blog updates the list of those who have now completed the Volcanic Seven Summits.  [There is a more recent blog here.]

There are now 19 climbers on the list.  Five are women and 11 have also climbed one or other (or both) versions of the Seven Summits.

For this list I have now omitted the date of the first summit as I am not sure of the usefulness of this information.  I have also added a completion number now that the numbers are increasing.  With the last Sidley expedition three people completed the Volcanic Seven Summits.  So I have noted these as 17th equal rather than seeking to give any of them preference over the other.

I am aware of a number of people who have just one more volcano to climb.  For most, this is Mount Sidley.  But I imagine that I am unaware of others who are close to finishing.  If anyone reading this blog has any information on those others I would be glad to have it.  Likewise if there are any errors or omissions in the list please let me know. I am always happy to correct these.

The Volcanic Seven Summits challenge becomes more popular.  The identification of the highest volcanoes on each continent was probably first published in the internet by Amar Andalkar on his ski mountaineering and climbing site back in 1999.  This site is still a good source of information though it has not been updated in recent times.

As a result the challenge is being marketed as such by leading operators such as Jagged Globe, Adventure Peaks, Seven Summits Club and Furtenbach Adventures.  I can foresee others jumping on the bandwagon though it is likely always to be less popular than the Seven Summits which has seen over 400 people complete. 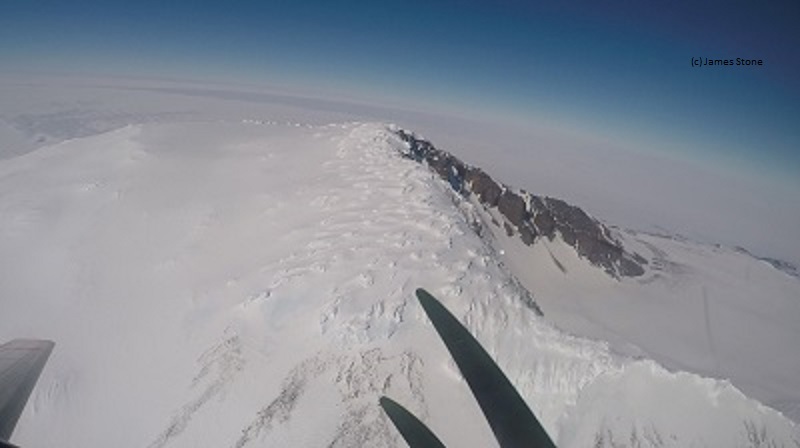 This is my annual update of Mount Sidley ascents.  ALE trip number 7 succeeded in putting two guides and three clients on the top of the volcano.  All three clients completed the Volcanic Seven Summits with this ascent.

A previous blog highlighted two of them.

This year, due to the small size of the team, a Twin Otter was used for transport to the mountain.  A second plane followed part of the way so a fuel cache could be left.  The Twin Otter with the team was unable this year to land in the crater.  Apparently snow conditions in the crater had changed since last year so a base camp was set up on the ice sheet at the foot of the mountain.

In another change from previous trips (at least when base camp had been on the ice sheet), high camp was set up via two carries from base camp and sleds were not used.  The first carry was undertaken in what became marginal conditions.  The team was then confined to base camp for two days whilst a storm blew through.

Once the storm had gone they were able to make the second carry and the top camp was set up.  After an “overnight” stay the group made the ascent.  Although the modelled forecasts looked promising, the weather was at first cloudy, then the sun came out and then (as the crater was being reached) it became cloudy again.  The wind also picked up and it became very cold.

Though Sidley is not a very technical mountain, it is a very cold one.  They were able to spend no more than about 15 minutes on top. They summited at about 1am GMT on 16th January (10pm on 15th January Chilean time).

The team was then able to make quick progress down back to top camp.

Satyarup Siddhanta was kind enough to call me using his satellite phone once they had settled back at top camp.  The three clients all seemed very cheerful, if tired.  In the meantime, back in India, there was a large group following the climb with a few Facebook Live events occurring.

The descent back down to the Twin Otter went without incident.  But the return to Union Glacier had a twist to it.  When they reached the fuel cache the weather there and at Union Glacier prevented further progress.  So they were pinned down for 24 hours at that point.  They had to set up camp and Satyarup’s description of the toilet arrangements probably do not bear repeating on a public forum!  That’s Antarctica for you.

As I write this, the team are now back safely at Union Glacier with a flight back to Punta Arenas scheduled for later today.  Even after this trip fewer than 50 people have ever climbed Mount Sidley.

The trip has received a lot of interest in the Indian press. Acouple of papers even contacted me for comment:

I have produced an up to date list below.  This should be read together with the commentary in my previous blog here.