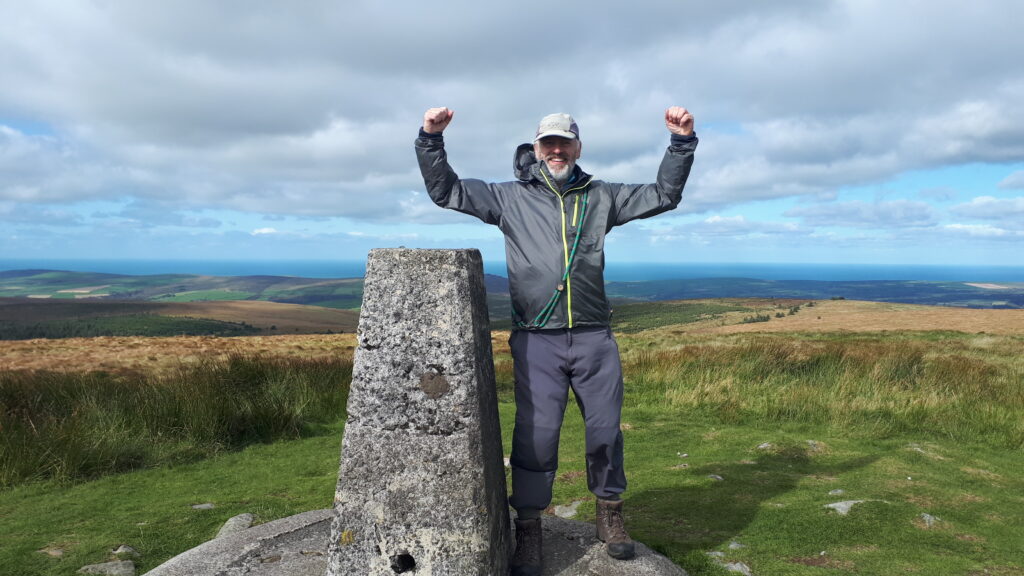 Two years ago, back in October 2018 I wrote a blog about completing the English Marilyns. You can find it here.  By way of reminder, Marilyns are hills and mountains in the British Isles that have a prominence of at least 150m.  There are 1557 of them in Britain of which 175 are in England.

To climb them all is quite an undertaking.  Although there are plenty of easy ones, their number do include a number of remote peaks in Scotland together with some technical ones, not least the sea stacks of the St Kilda archipelago.  These lie 40 miles to the north west of the Western Isles in the stormy seas of the Atlantic Ocean.  So it is quite a logistical undertaking even to reach them.

Yet 10 or so determined (or should I say obsessed) souls have managed to climb them all.  There is even a group, The Relative Hills Society, that primarily promotes an interest in climbing British hills that are prominent relative to their surroundings.  A link to the group’s website is here.

Prominence based categorisation of mountains and hills is becoming more popular internationally.  I blogged about Ultras in December 2018. I followed this up with a further blog on the top 50 most prominent mountains of the World earlier this year here.

Recognising that the pursuit of all of the Marilyns is likely to be a lifetime challenge, the Relative Hills Society has long identified two intermediate stages in the endeavour.  These are, respectively, when 600 and 1000 Marilyns have been climbed.  600 gets you into the Hall of Fame;  1000 takes you into the Upper Hall.

Back in August 2018 when I climbed my final English Marilyn, I had climbed around 500 Marilyns.  In my October 2018 blog I indicated that I would probably look to get to 600. I would try to re-visit places of old as well as explore places I had not been before.

Well I succeeded in two out of the three objectives.  Whilst I have not really re-visited places I had not been to for a while, I have used the opportunity to go to some areas that I did not know.  I have also knocked on the door of the Hall of Fame and been granted entry.

The Coronavirus epidemic has not helped.  The travel restrictions meant that I was unable to climb any Marilyns between the end of January and mid-July.  I made a couple of quick forays into the Southern Uplands of Scotland in January before the restrictions were imposed.

Frustratingly, during the period of UK Covid lockdown, the weather was extremely good.  So I was straining at the leash by mid-July when we were released.  Of course, by then, the weather had reverted to type with a series of Atlantic fronts interspersed with sunny interludes.

The Southern Uplands of Scotland are my go-to area when I am not able to travel further afield.  It is an area I have ignored during most of my trips north.  The grandeur of the Highlands was more tempting.  But the Southern Uplands do have a charm of their own, even if often despoiled by the industrialisation of the wide open spaces by the many wind “farms” located there.

5 short trips by mid-September saw a few long hill days, including traverses of the Pentland Hills above Edinburgh, around the remote head of Ettrick Glen and all 7 Fife Marilyns in a day.  I then stood just 5 short of the entrance to the Hall.

Ironically, given my usual focus on Scotland, we were due a trip to south-west Wales at the end of September to see a couple of friends.  That also provided the opportunity to walk in a part of  mid-Wales (en route) and the Preseli Hills of Pembrokeshire.  So my 600th Marilyn was Foel Cwmcerwyn, the highest of the Preselis, on a bright and breezy day. I was accompanied by my normal two companions (wife and dog) together with two friends and their dog.  Foel Cwmcerwyn is a wonderful viewpoint.  The views stretch from the Gower Peninsula, Lundy Island, the north Somerset coast, the south west tip of Pembrokeshire, north up towards Cader Idris and over the remaining Preseli Hills.

That is not the end of the journey though.  Just as completing the English Marilyns takes one all over England to places one might not otherwise visit, so it is with the UK Marilyns.  But there are still parts of the UK that I have not visited, such as some of the Scottish islands.  So if foreign travel remains restricted, then that may be where I will be.  After all, there are still over 900 Marilyns that I have not climbed. 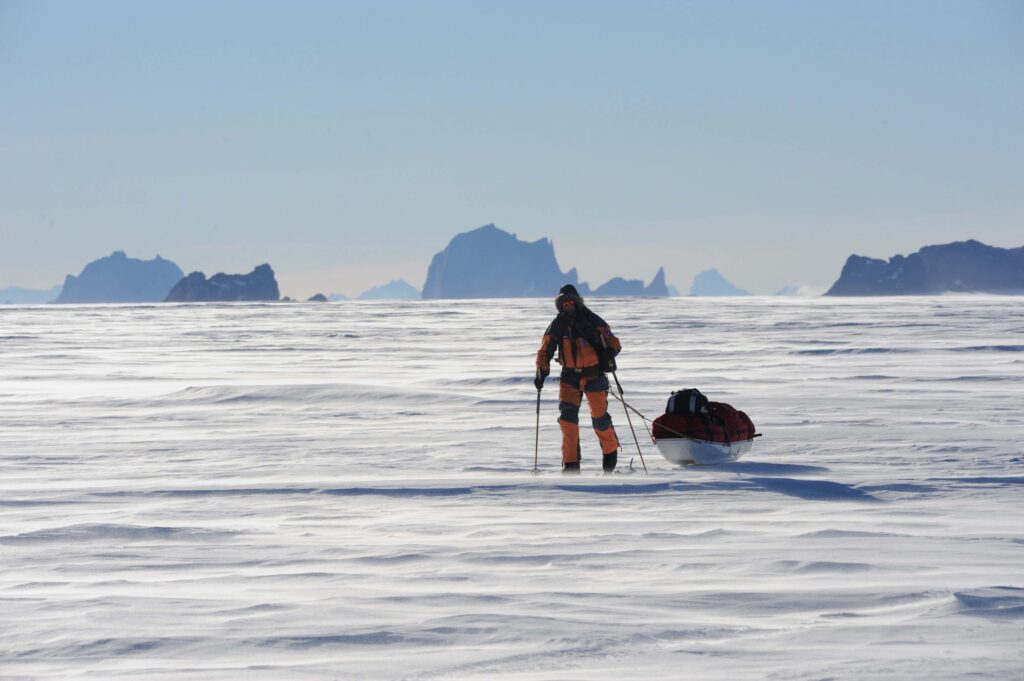 Most Brits (certainly older ones) are familiar with the heroic and ultimately fateful endeavours of Captain Robert Falcon Scott and his team. They lost the race to be the first to the South Pole, beaten by less than 5 weeks by Norwegian, Roald Amundsen’s party. In a sense Amundsen and his party set the first of the long-distance polar records.

Nonetheless Scott was hailed as a hero, at least within the UK. A proud nation erected memorials in his honour, and family members and survivors rewarded. In the eyes of British high society Scott and his team represented the values of the British empire – adventure, daring, bravery, verve and leadership. Reality was different. Although his legacy has since been questioned, the fact remains that exploration and feats of endurance are held up as a matter of national and personal honour.

As more and more of the world has been reached, national endeavour now focusses beyond the earth’s atmosphere. Instead it is now individuals who look for eye-catching adventure, none more so than in Polar regions. The “first”, the “youngest”, the “fastest”, the “whatever” person to achieve an objective transfixes the media and helps find content for it. The media rarely explores how noteworthy each objective really is. It rarely discerns the motivation behind the achievement.

I remember reading media reports earlier this year about the achievement of a so-called record – the first unassisted crossing of Antarctica. A race between an American, Colin O’Brady, and a Brit, Henry Rudd, gripped the tabloids. Two years before their “crossing”, another heroic failure by a Brit had occurred. Then, tragically, Henry Worsley died in a Chilean hospital. He had been taken ill whilst attempting a similar route to that of O’Brady and Rudd. He was just 120 miles or so from completing his crossing when ALE had to rescue him and transport him back to South America. So the “record” remained for the taking.

O’Brady beat Rudd and so “won” the race and set a “world first”. His PR machine went into overdrive. The media and his sponsors feted him. He had achieved “An Impossible First”.

That claim very much diminished much more worthy efforts such as that of Borge Ousland. Borge Ousland’s 1997 solo crossing was almost double the distance of O’Brady’s effort as shown by this map.

I then remember reading the article by Damian Gildea on the Explorersweb site, an excoriating critique of O’Brady’s claims. It also summarised the history of long distance travel in Antarctica and how people have sought to define their achievements in aid of glory and commercial gain. You will find the article via this link.

More recently experienced polar guides, Christoph Höbenreich and Eric Philips, have tried to make sense of what is going on. They ask the questions “What is still a pioneering achievement? Something never attempted? A risky adventure at the edge of the impossible? An extreme sporting challenge? And which among them are mock adventures?”. In so doing they seek to develop a classification system to describe what these trips actually involve.

They have published a series of blogs entitled “Circus Antarctica” to explore these issues, the first of which is here.

The blogs are well worth reading. You can then make your own assessment. Is the publicity spun by adventurers to polar regions and are their “polar records” really all that they claim to be? In the first of the blogs there is also a link to a good National Geographic article from earlier this year. This article discusses the O’Brady claims.