I first climbed Ben Nevis in 1981. It was on my honeymoon. We were not well equipped. Although we had great views from the top, we were soaked through on the way down – the cagoules we had at the time being totally inadequate for the job, and we had no over trousers.  And as reported elsewhere on this site, we left a damp trail of footprints through the hotel reception as we skulked back to our room to sort ourselves out.

The second time was a solo ascent in October 1993. It was a day of leaden clouds and no view from the top. I was on a top bagging mission that day and visited both Carn Deargs (each over 1,000m) from which I recall some watery views before making way to the summit.

The third time was in May 2007. I dragged Julie, the kids and Laura (the daughter of friends of ours) up – to be fair Julie and Laura were quite willing!  We were accompanied by Caroline and her (also less than willing) son, Ruaridh. We were also supposed to be with my brother, Peter, and his family but they decided to set off before us and so we passed each other on a big snowfield 20 minutes or so short of the summit. It was a nice day, though the top 30m or so were covered in cloud until just as we were leaving. But the views were great nonetheless.

It had long been a wish of mine to approach Ben Nevis by the less frequented and far more interesting Carn Mor Dearg arête. Fortunately this was a route that Ciaran also wished to take. Finally, we had a forecast of good weather after our decidedly mixed week. As I did not want Ciaran and I to feel rushed, I determined that we should start the day at a reasonably early time and so it was that we left the North Face car park at Torlundy shortly after 6am. There was one other car there before us.

If you could have chosen the weather, then this day’s would have been it. At that early hour there was a lot of low cloud drifting around but you could tell that it was quite thin and would most likely burn off. As there was still a fair amount of snow around for the time of year we went equipped with ice axes and crampons, just in case.

We followed the signed trail up through the trees. A steep section warmed us up and got the heart rate going with slightly heavier packs.  Eventually we reached the edge of the forest, passed a bench and went around a bend where we had our first view of the north face of The Ben.  Nice! 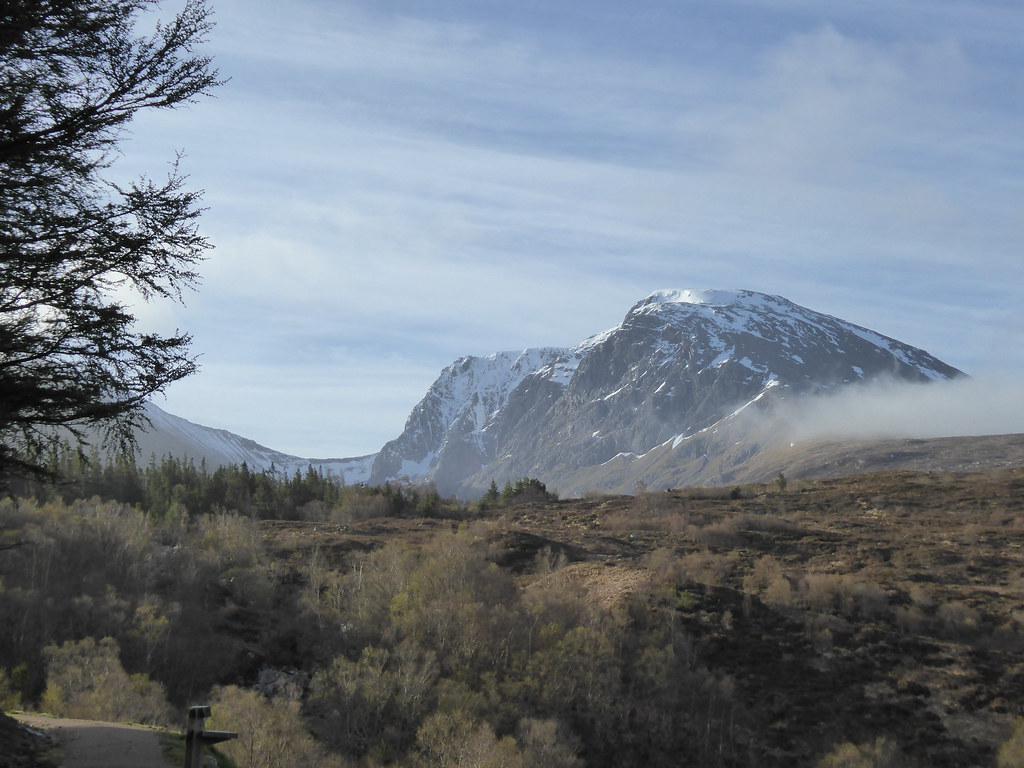 We were soon at a gate and stile which marked the end of the forest. We followed the path onwards with the Allt a’Mhuillinn splashing to our right. Here the path rises at a gentle rate. Our route today would take us up Carn Mor Dearg before we tackled the arête.

In the photo below the arête is the snowy dipped ridge directly ahead and the broad open slopes of Carn Mor Dearg are to the left. 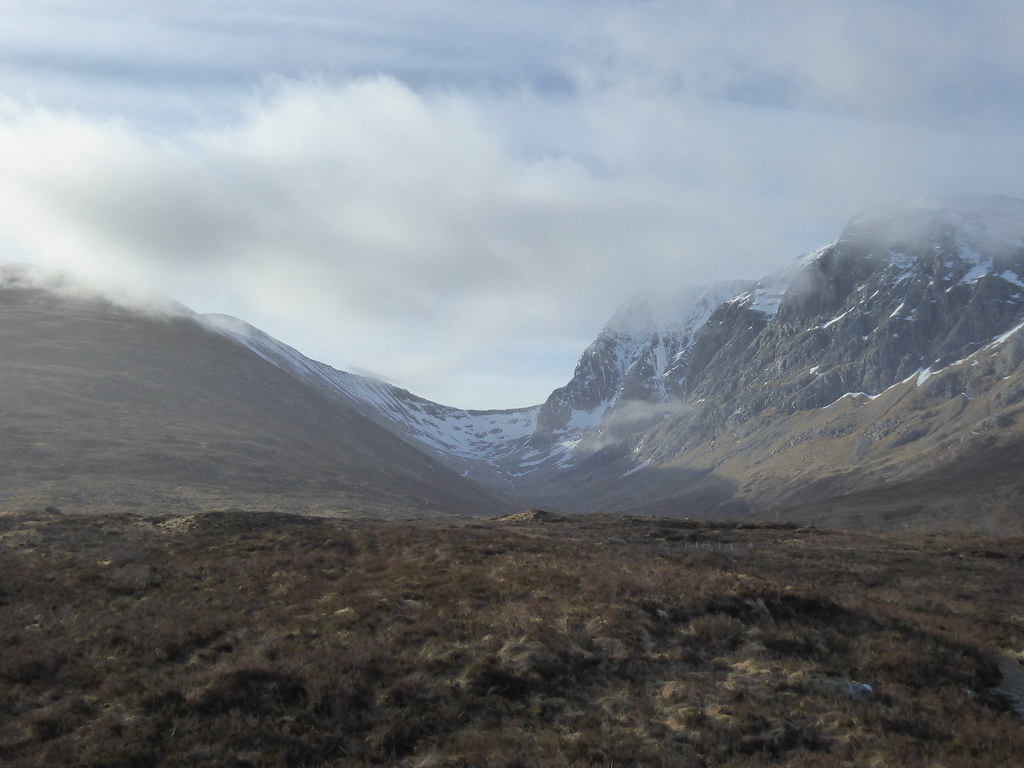 A small cairn marks the start of the path up towards Carn Mor Dearg.  Here we had a brief rest for a drink.  At least to start with, the route of the path up is obvious if a little wet in places.  There was nothing to it but to grind one’s way up. There was around 2,000 feet (600m) of ascent to tackle. In fact we found that we gained height relatively quickly.

Soon we had good views back to the narrows between Lochs Linnhe and Eil at Caol. 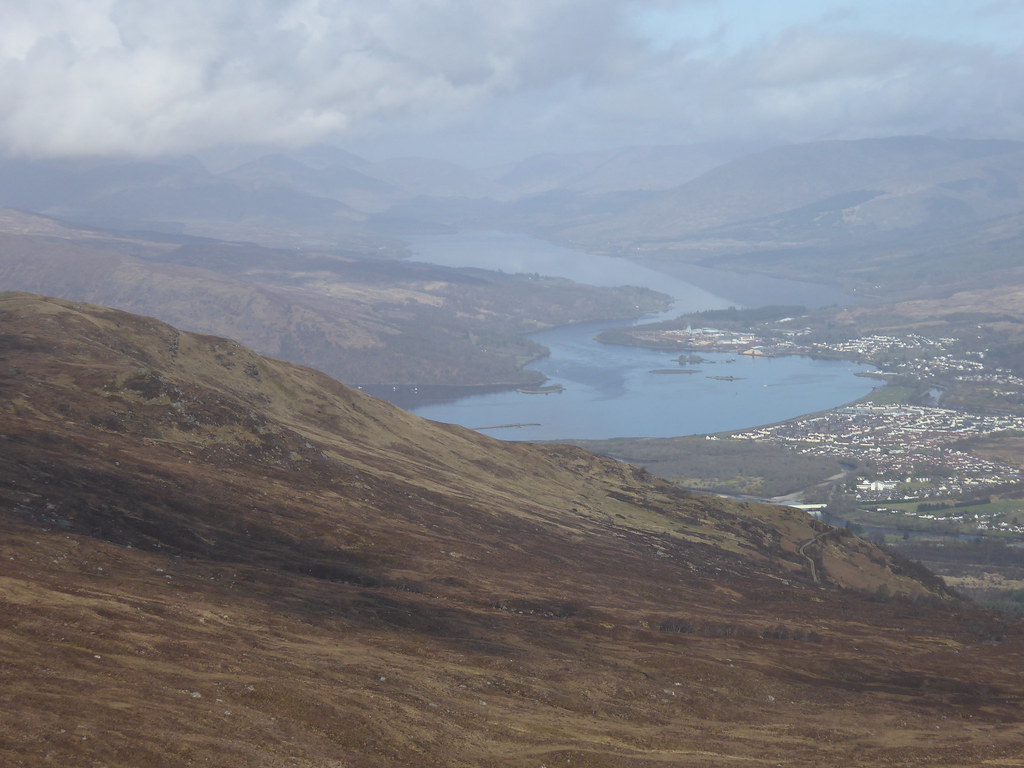 And the clouds provided atmospheric views across to Ben Nevis. 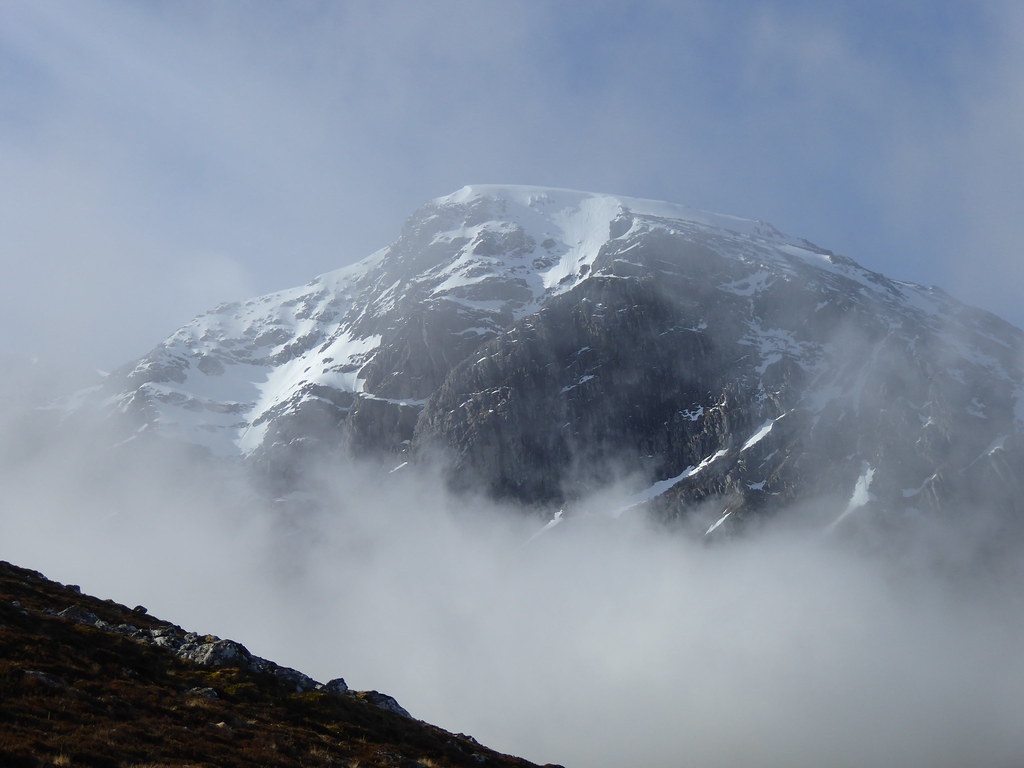 On we continued with the slopes continuing to be steep, but the way now a lot drier.  And it was now becoming warmer, the early morning chill disappearing notwithstanding the increase in altitude. 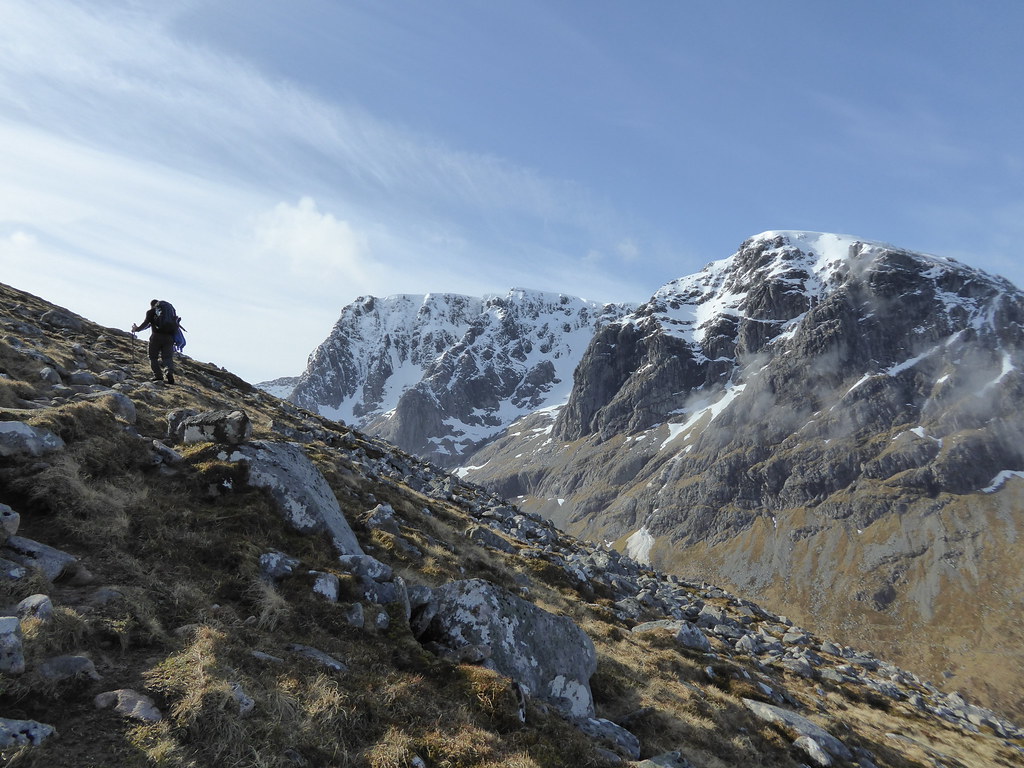 The North Face continued to open up.  We could hear a lot of helicopter activity that seemed to be coming from near Half Way Lochan on Ben Nevis.  Then we heard a loud crack and a bang as an avalanche came off the North Face and crashed down near the lower part of the Ledge Route.  This was probably triggered by a cornice collapse but possibly by the helicopter activity.  I hoped that there was no-one in the vicinity of the avalanche.  Snow continued to funnel through a gulley for a fair few minutes even once the main event had come to an end. 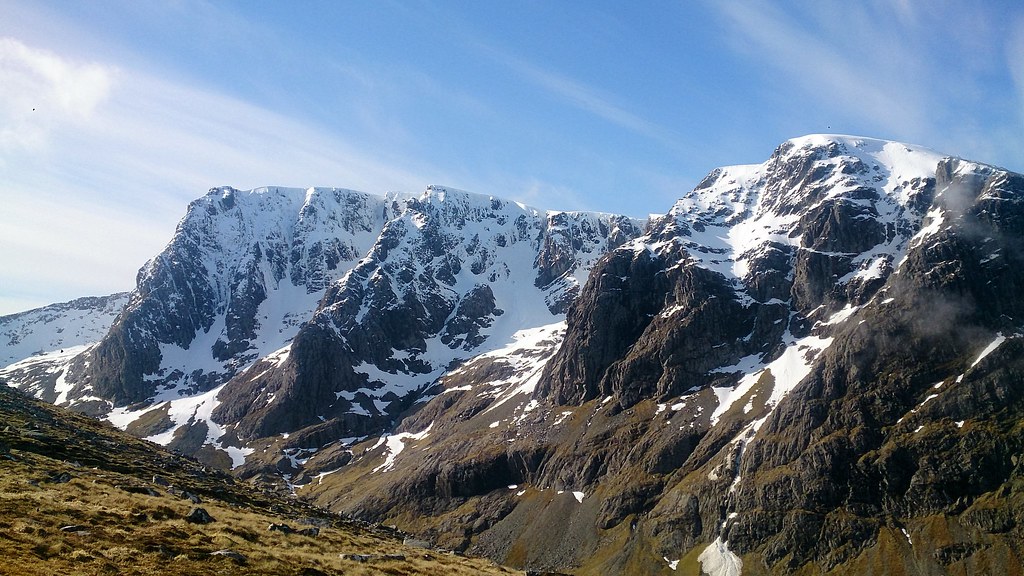 The other excitement on the climb was that I dropped my GPS.  I thought I would not see it again but fortunately I had only just done so and Ciaran spotted it.

The path passes below Carn Beag Dearg and then loses itself amongst bouldery terrain.  I took a direct route towards the ridge between Carn Beag Dearg and Carn Dearg Meadhonach whilst Ciaran continued to contour a bit to reduce the gradient for himself.

I arrived at the cairn on Carn Dearg Meadhonach and took a second rest whilst waiting for Ciaran.  This was the view back to the narrows. 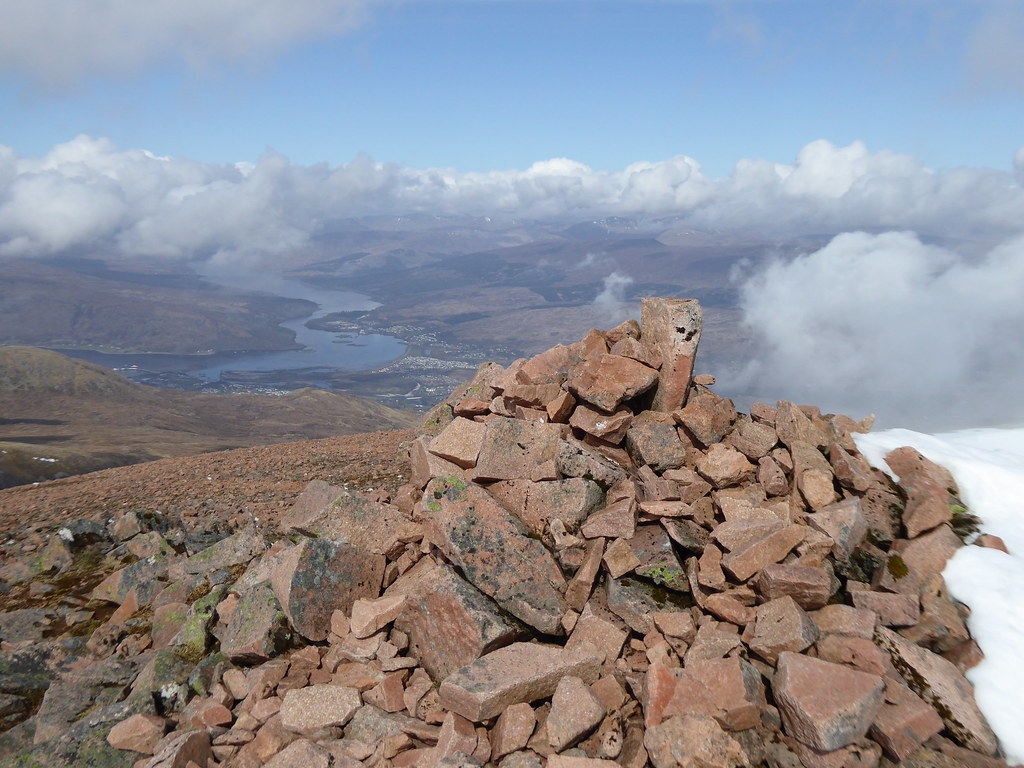 Looking the other way, this was the view to Carn Mor Dearg.  It has a pleasant pointy shape from here.  It is just that it is dominated by The Ben’s North Face.  Carn Mor Dearg was the Munro where I finished the Munros first time around in 1991.  That was a hot day with a hot dehydrating wind that sucked us dry.  Peter, Derek and Cathy had come over Ben Nevis from the campsite in Glen Nevis and met Julie, Sue and me on the summit.  We ended the day fried and celebrated after the event in the same hotel where we had left the footprints 10 years earlier.

It was a contrast to my second ascent in the winter of 2003 with Caroline and John.  On that occasion we had come over Aonach Mor and up Carn Mor Dearg’s shapely east ridge, then a fluted snowy feature that arrowed straight from the col below to the summit.  On that occasion we descended the slopes that Ciaran and I had just ascended. 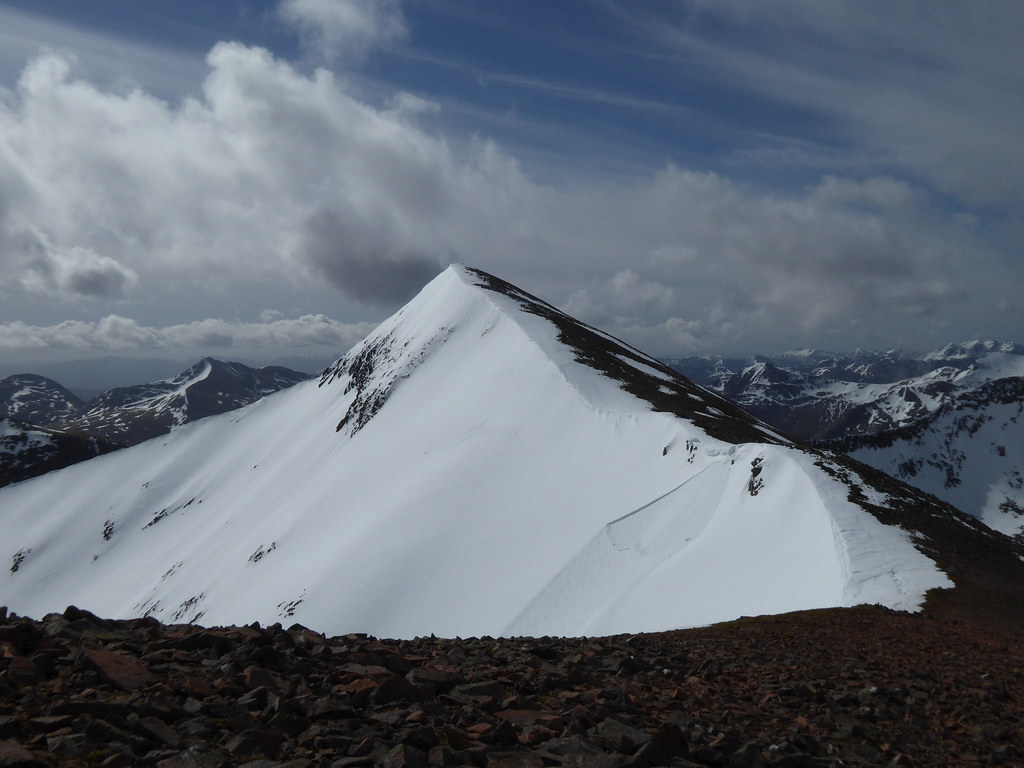 Ciaran arrived and we had a bit to eat and drink.  I suggested to Ciaran that he go ahead and I would take some pictures of him ascending the final slopes of Carn Mor Dearg. 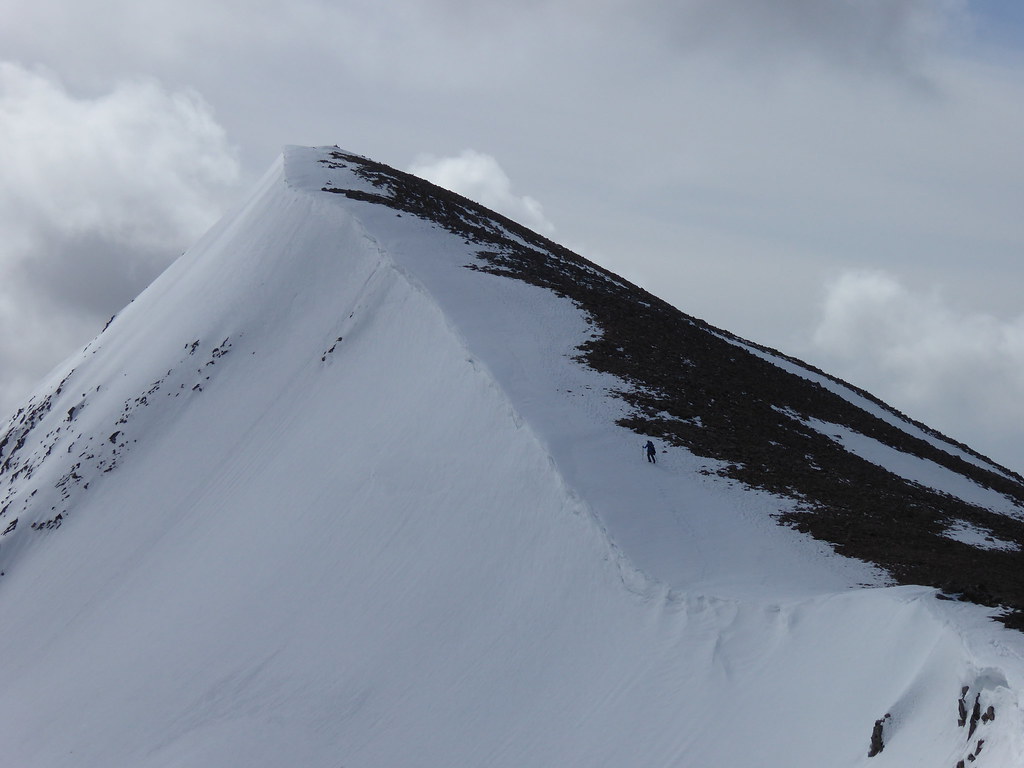 I then followed on.

We were soon together on the summit.  to the west were Aonach Mor and Aonach Beag. 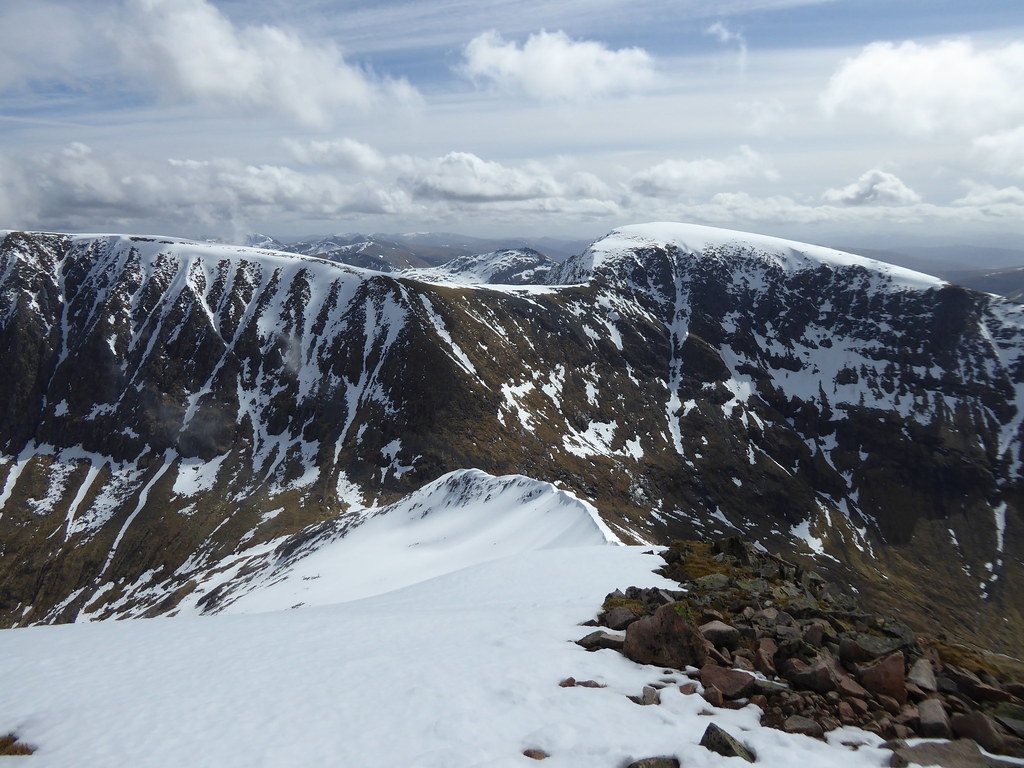 In the foreground of this picture is the top part of east ridge.

But one’s gaze was always drawn to the imposing face of Ben Nevis opposite.  The clouds were still providing atmospheric vistas. 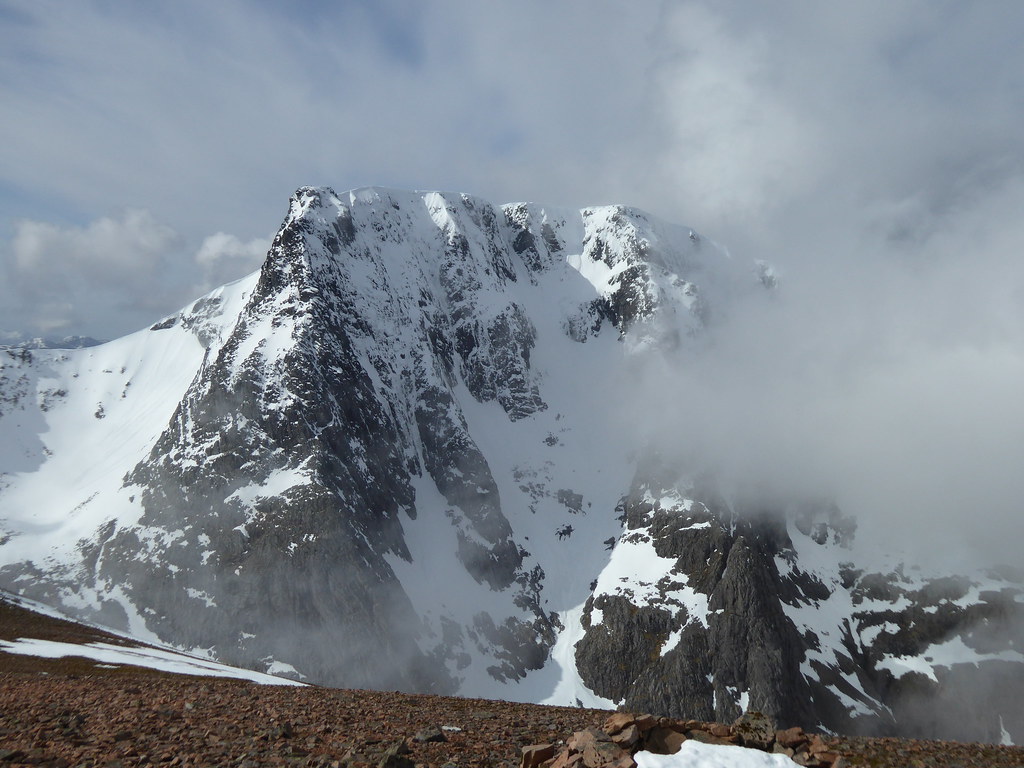 And from here the arête could be seen.  The initial drop off is quite steep and then it narrows considerably.  As can be seen from the photos it was still in fairly wintry conditions.  We debated whether or not to put on crampons.  I decided not to do so.  Ciaran followed suit, but part way down the initial steep slope he had a change of heart.  These were not conditions he was used to.  So safety was paramount.  I probably should have put mine on too but I gingerly made my way down.

Soon it became a bit rockier.  I was able to use the rocks but there was enough snow for Ciaran to step on for his crampons.  Eventually the crampons became a bit of a nuisance and Ciaran took them off.

Here is the first part of the descent. 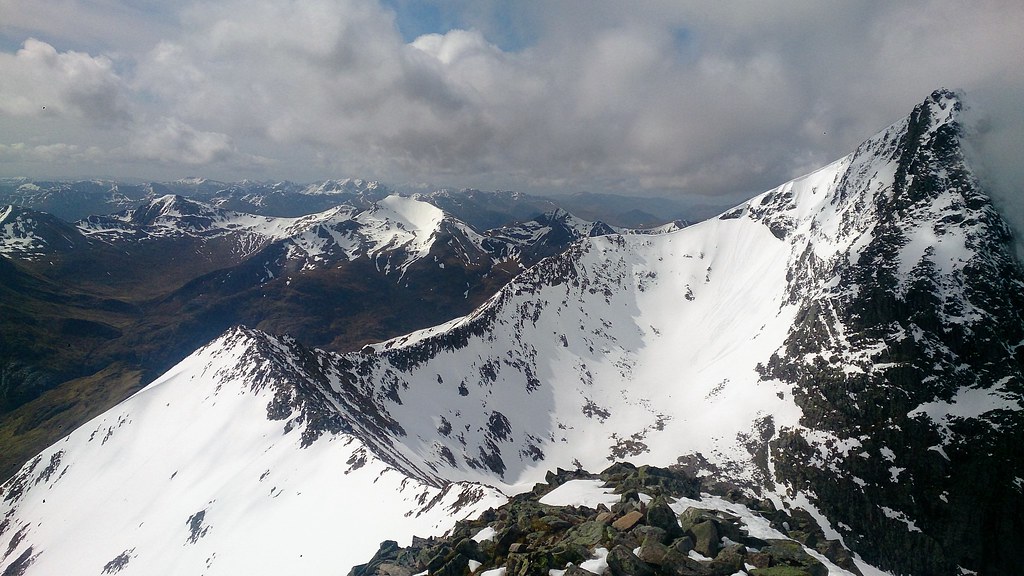 with a look back 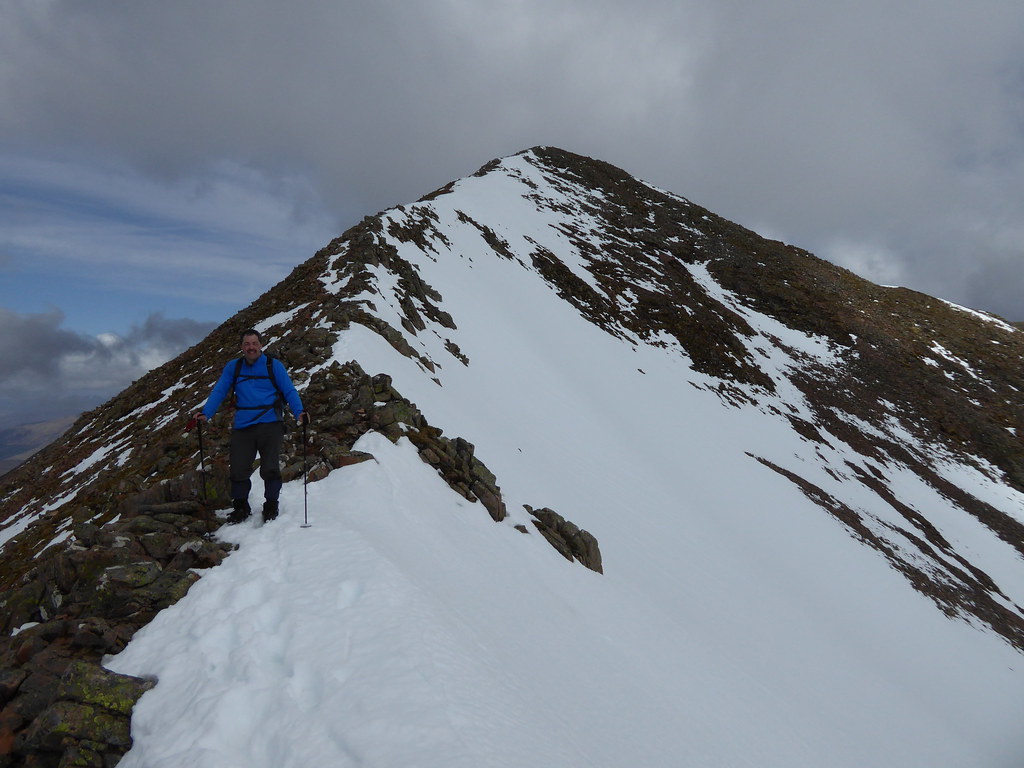 The traverse required a lot of concentration to ensure that any snow was stable and to avoid ice that was still there hidden in shady parts.  Slowly we made progress with Ciaran gaining confidence as we progressed.  And the views slowly changed. 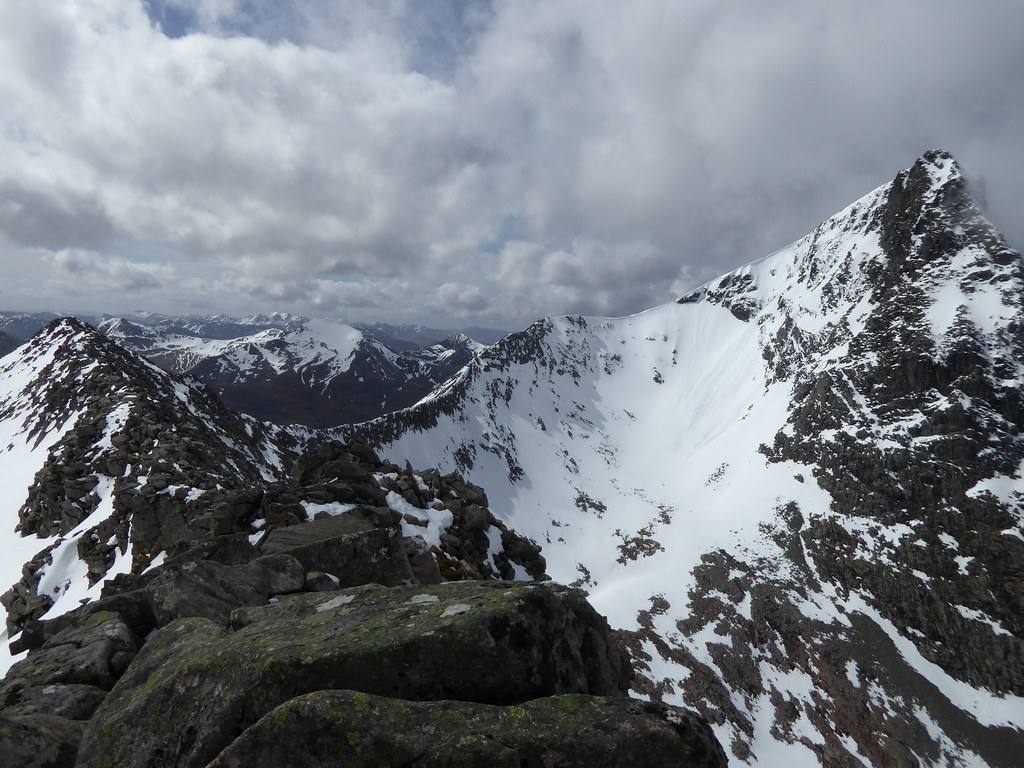 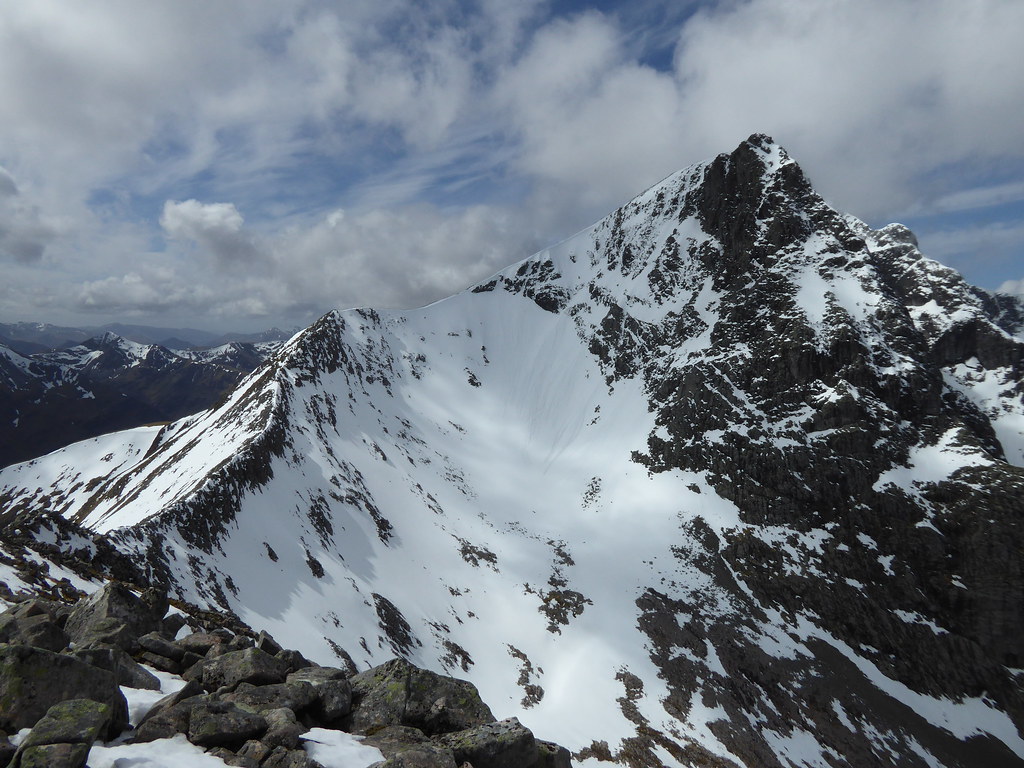 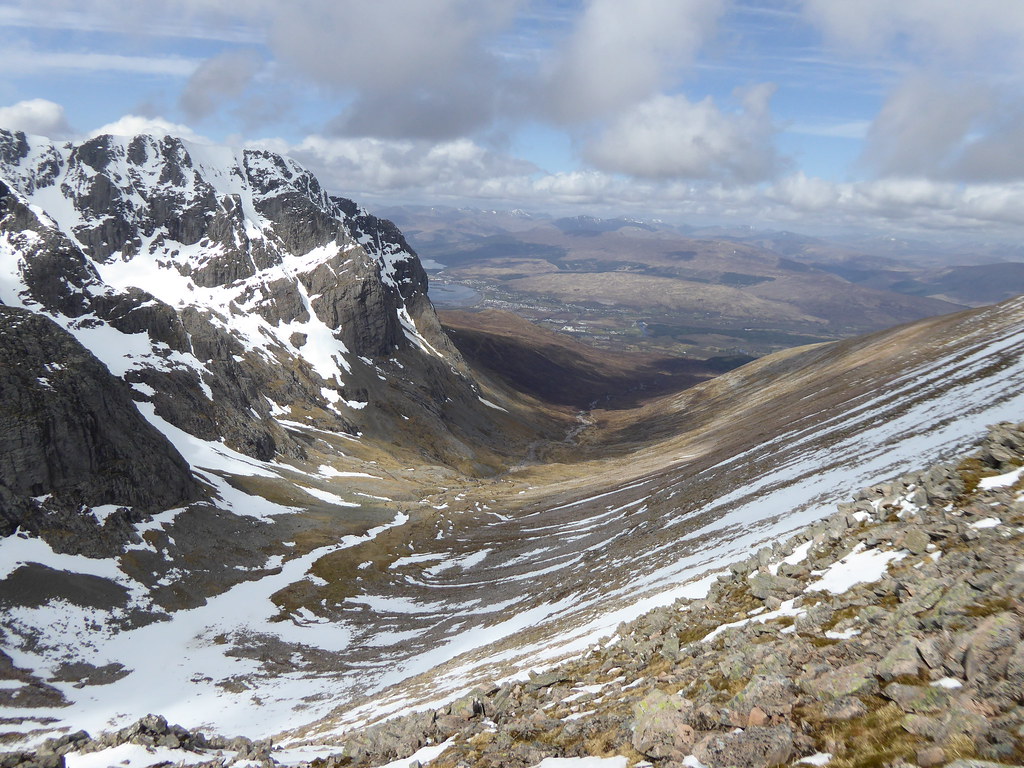 And a further look back 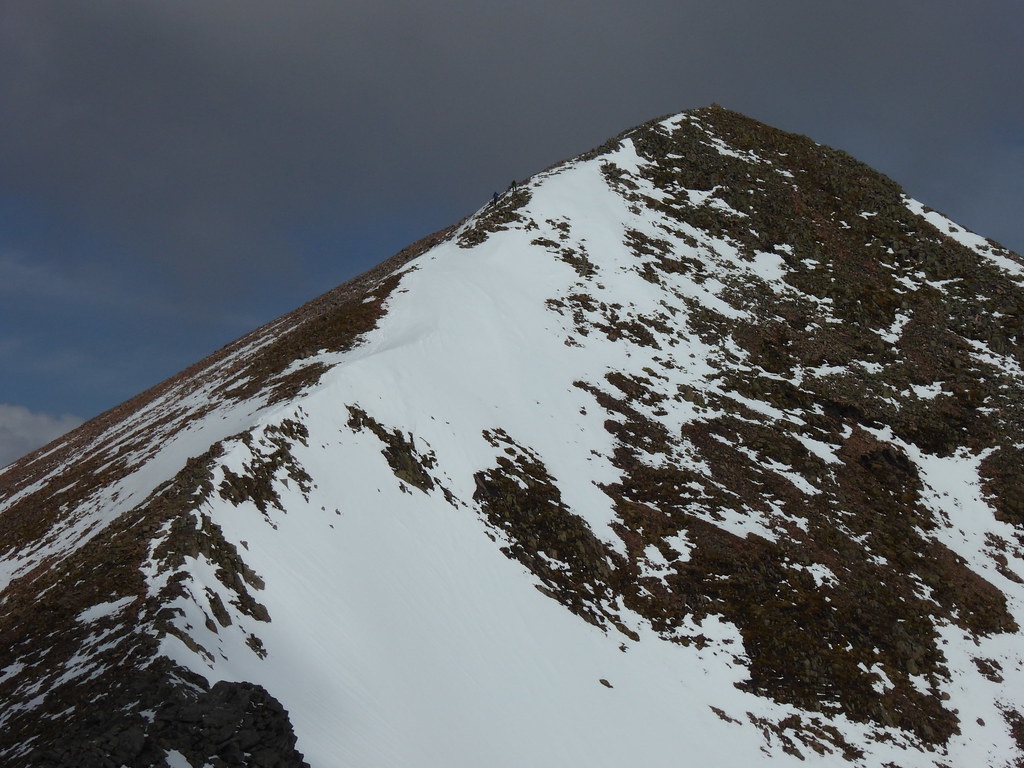 Part way along we could see another couple of people following.  We stopped for some more sustenance.  The air was practically still.  How often is that the case on this airy perch?  What a day.

We then had a further 15 minutes or so before the narrowness stopped at a level section just before the final 650 feet (200m) of ascent up on to Ben Nevis’ summit plateau.  I think Ciaran greeted this point with a mixture of achievement and relief.  I guess that going over the arête is not an experience he will soon forget.  So here he is reaching his haven. 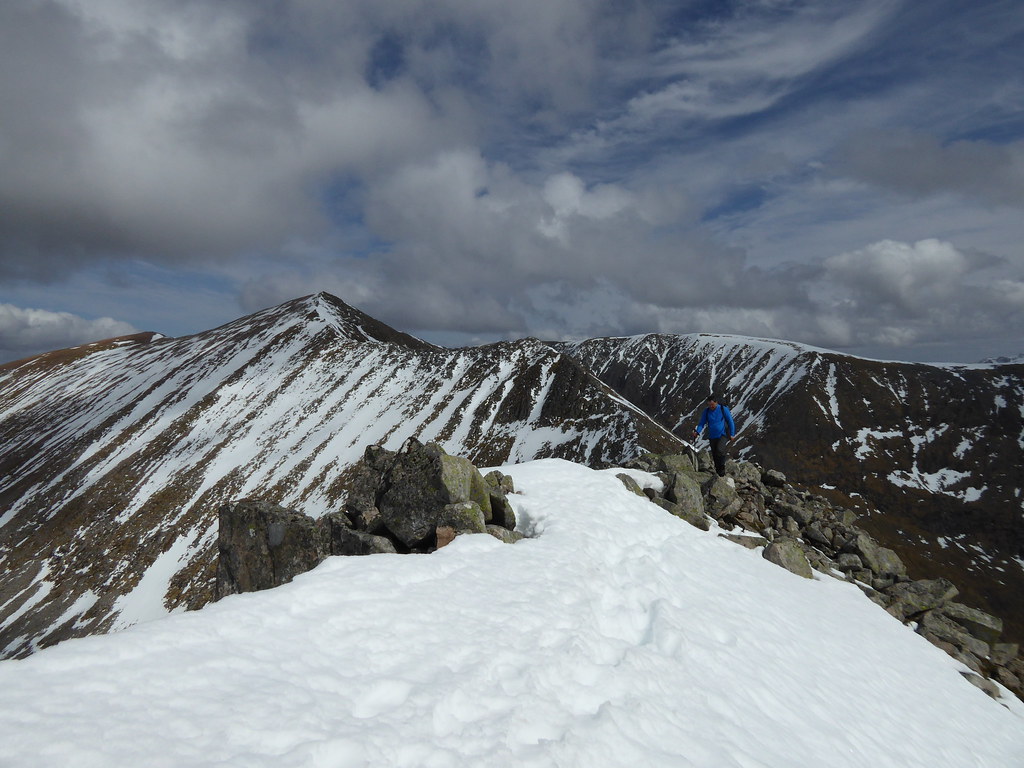 At this point a cairn has been constructed.  And here it is with a foreshortened look up the final slopes. 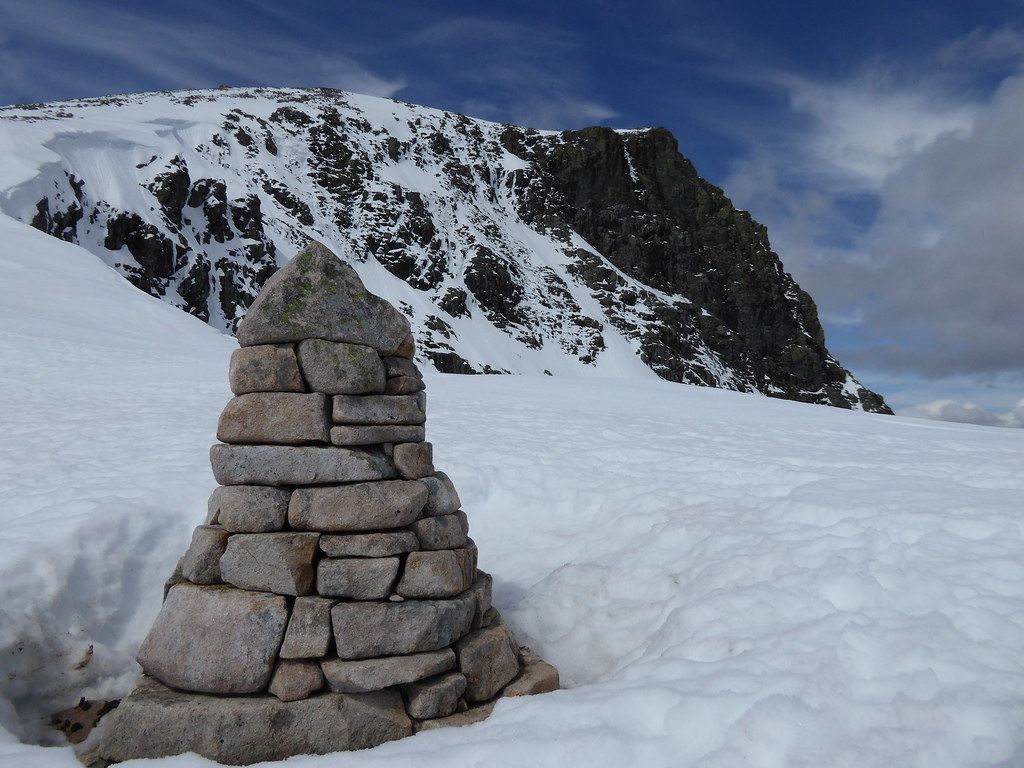 The other pair had caught us up by now.  We had a further guzzle of liquid and a change of clothes.  It was now hot.  We followed the others using their footprints to help find footholds in the slush that the snow had become having by now had hours of sunshine falling on it.  We did not like the length of the paces they were setting so I took over breaking trail.  In no time we were emerging on to the plateau.  Here is Ciaran with Aonach Beag behind. 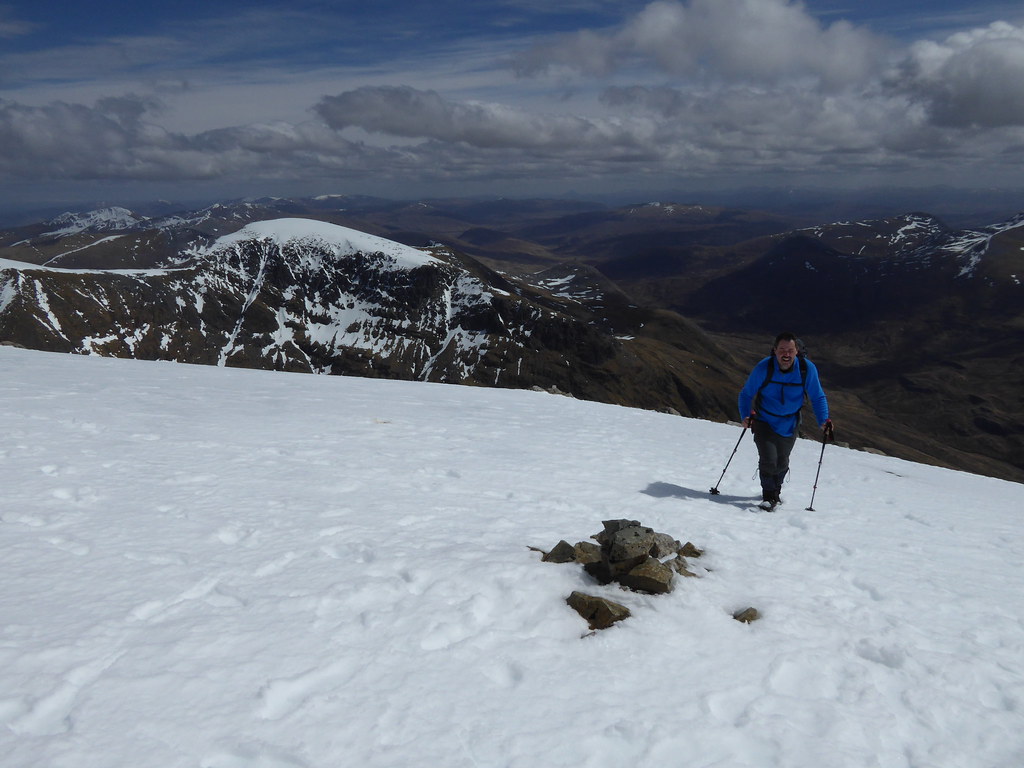 As he caught up I was approached by a German couple who had ascended by the tourist route and who enquired about the route we had taken.  They were well equipped and I gave them some idea of the conditions and timings.  Off they went but we were to see them later on the descent because they had been put off the initial steepness down to the arête.

Having seen only two other people up to now, the character of the climb now changed with the expected throngs in the summit area.  That I was able to take this selfie without someone in the immediate background was remarkable! 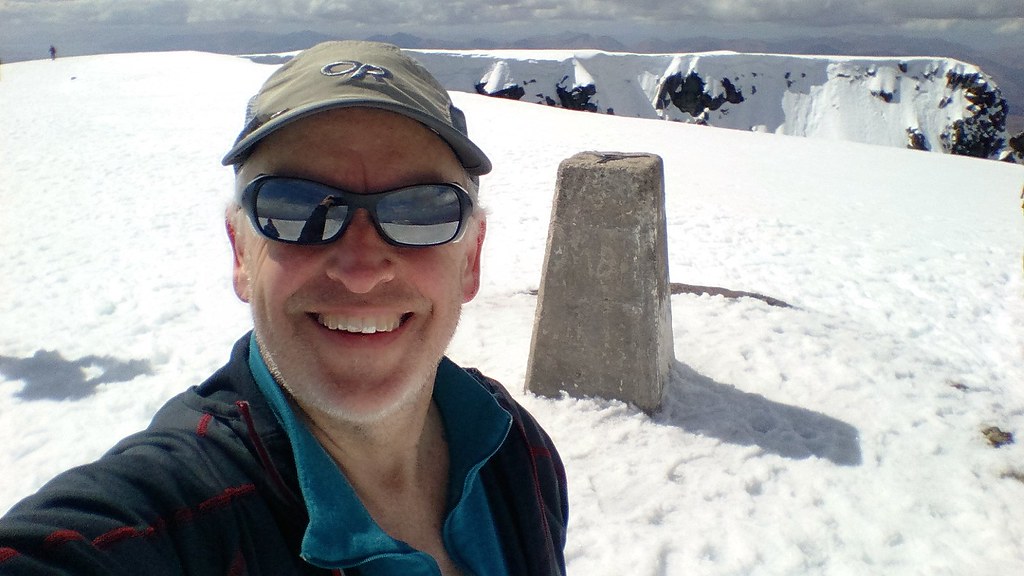 As remarkable was the fact that there was still hardly any wind. Wow!!  It was a stunning contrast to the previous occasions that I had been up there.  After a good look around at the views it was time to depart. 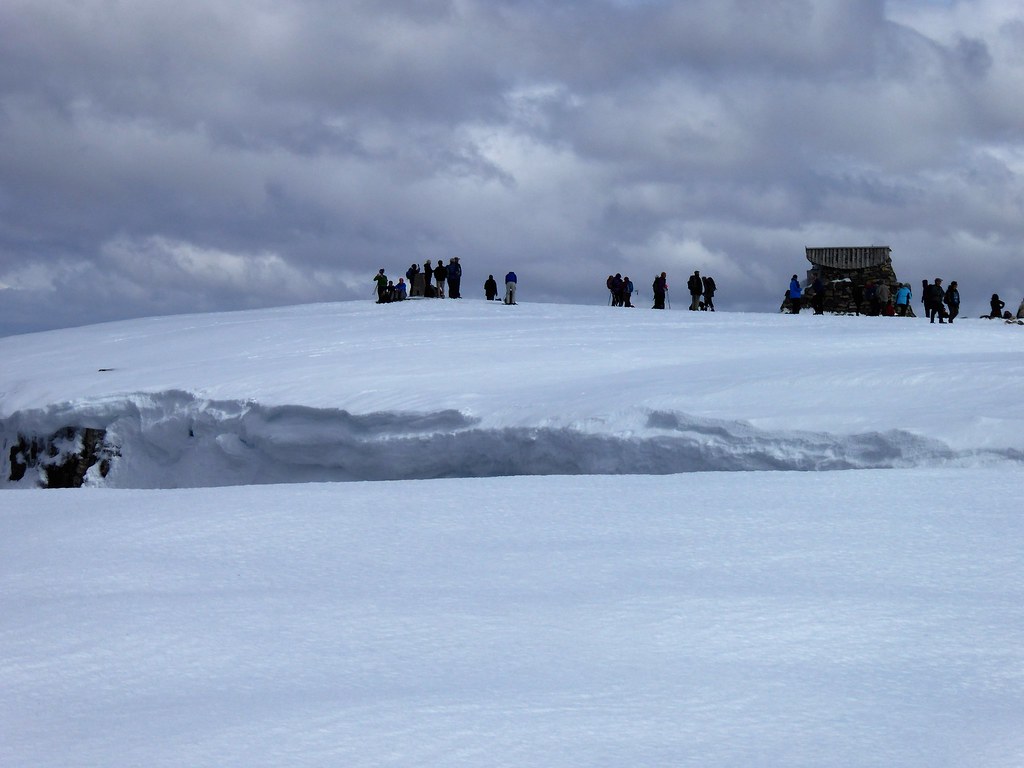 Here is a look across to the Mamores.

The snow remained soft so there was a fair bit of slithering and sliding on the descent.  People were still on their way up.  Of course, many did not seem appropriately attired.  But the risk of them getting anything more than wet feet did not seem too great on a day like this one.  There is a line of cairns to help with navigation. 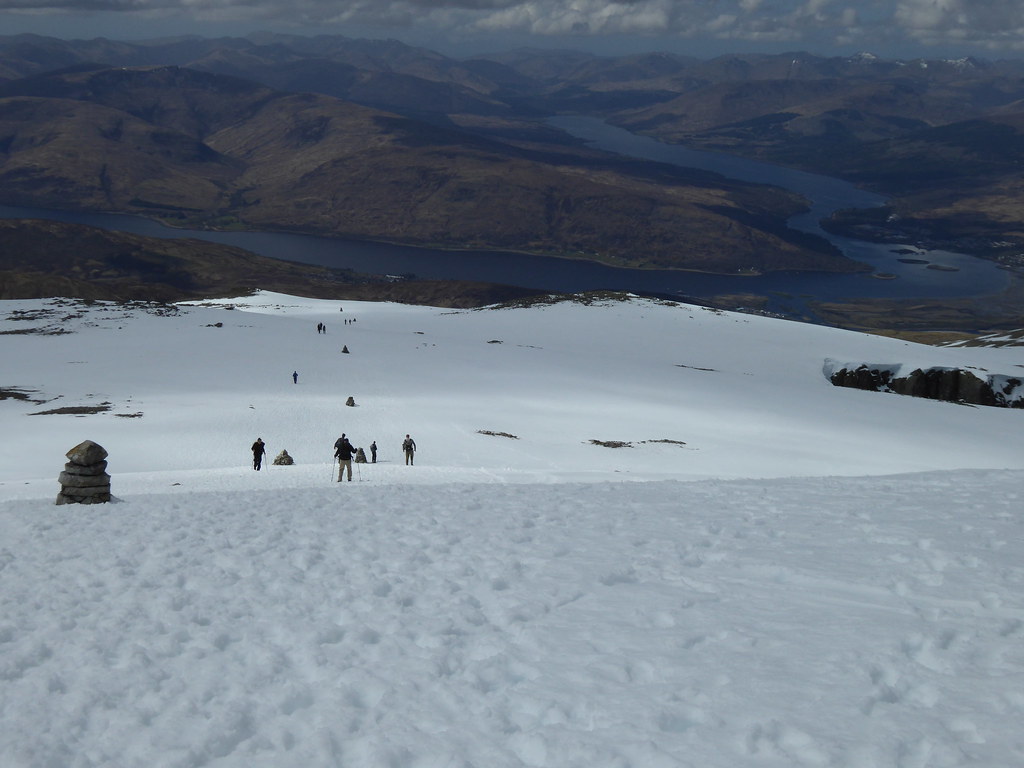 Here is a view to one of Ben Nevis subsidiary tops. 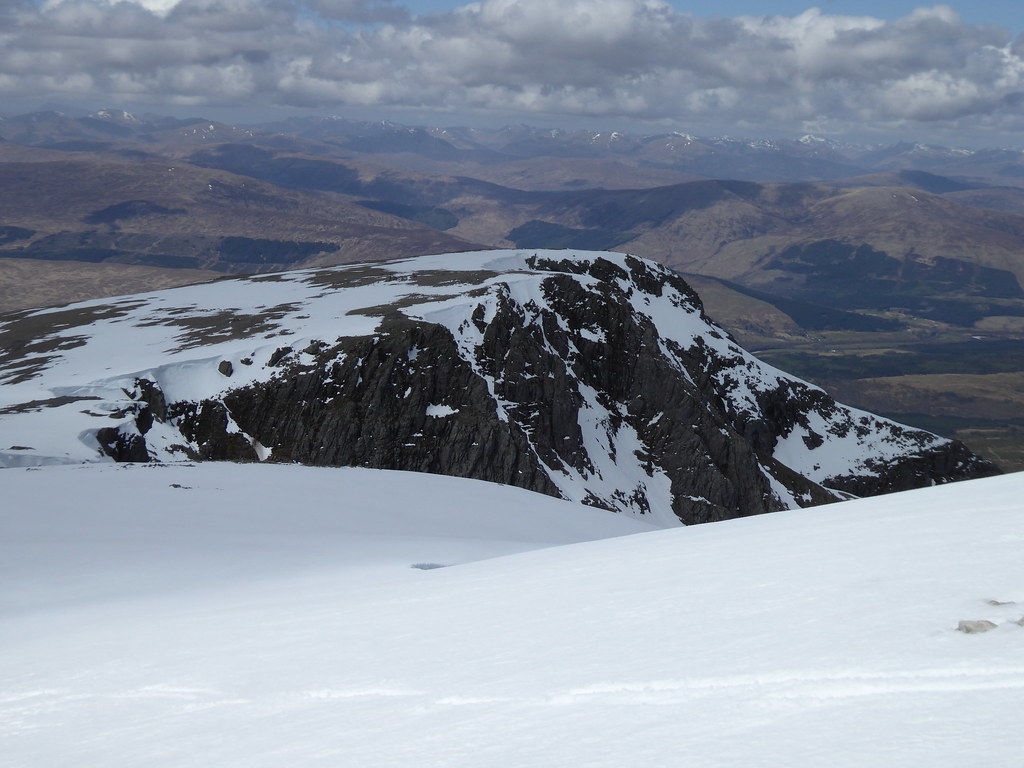 and finally a panorama again to Lochs Linnhe and Eil.

From then on it was a question of following the tourist path down to Half Way Lochan and then cutting across to its northern end and making one’s way down the open hillside to the Allt a’Mhuillinn.  We found a crossing point near the stile to the forest and it was then a question of making our weary way along the forest tracks back to the car. It had been 10 hours including all the stops.

We rewarded ourselves later with dinner at Russell’s Restaurant in Spean Bridge – recommended!

A day to live long in the memory.