Three nights (two complete days) in Mendoza.  This was spent looking around the centre of the city, organising permits for Aconcagua and walking out to the Parque General San Martin (the city’s largest park).  Here there was a serious boating lake, classic cars being shown off, a mass aerobics group exercising to music pounding from huge speakers, joggers and people enjoying the sun just like we were.

The city is quite a chilled place with wide streets and squares, coffee shops spilling out on to the pavements, street entertainment on the main shopping drag and so forth.  Here are some photos that Derek took. 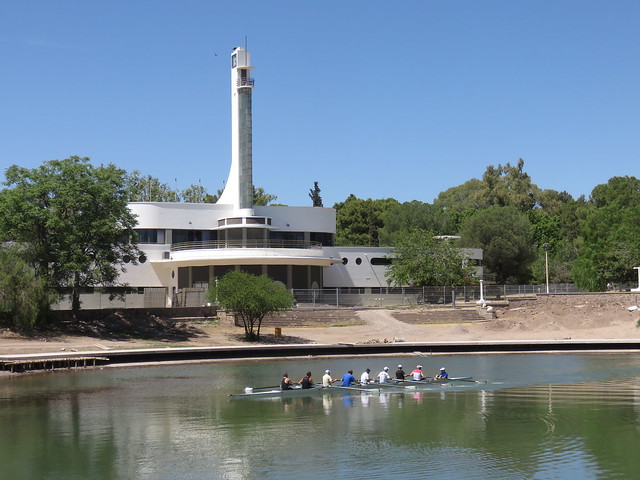 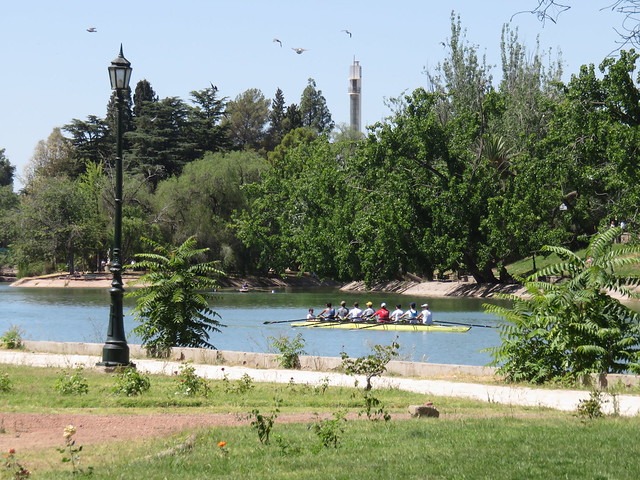 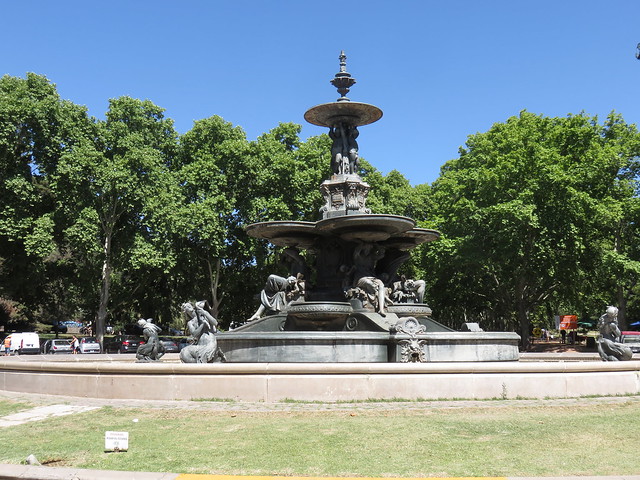 It has a Mediterranean type climate.  When we were there the temperatures were around 24 degrees C with light winds – very pleasant.  It forms part of the fourth largest metropolitan area on Argentina and is at an altitude of only 750m (2,500ft).

There are plenty of eateries.  We had one very good meal and one outstanding meal in Mendoza.  Recommended eateries are Ocho Cepas (the outstanding one – pre-booking normally required) and GioBar (good if quiet).  This is where we had our first taste of the renowned Argentinian reds.  I found the local Merlot better than the, perhaps, more famed Malbec.  We saw some of the vineyards on our departure from Mendoza.  Viniculture only works around Mendoza because of the snow melt from the Andes, otherwise it would be too dry.

Obtaining the Aconcagua permit was a bit of a palaver.  First we had to visit a tourist office.  We were not allowed to fill in the forms until our outfitter was there to countersign them.  He therefore needed to be found.  Fortunately a representative was actually in Mendoza.  We then received piece of paper that allowed us to go to a kiosk about 200m from the office to make the payment for the permit.  The receipt then had to be taken back to the tourist office which would then issue the permits.  All of that took about three hours.

In the meantime, because the kiosk only accepted cash (and Argentinian pesos at that) we had to change US dollars.  That involved some, technically, illegal activity on our part.  There is an official exchange rate and an unofficial one.  The unofficial one is catered for on what is known as the blue market (yes, blue not black).  There are known spots on some of the streets where, as you walk by, you are approached by people who say “cambio” to you.  These people are normally on a commission and earn their money by enticing people like us to a back street money exchange.  So we were taken to one such exchange to do the business.  It turned out alright in the end and we had our pesos (and therefore our permit).

So it was good to spend some time here recuperating before the final stage of our expedition.

There was just one night’s stay at Laguna Verde after the ascent of Ojos del Salado.  We were now on our way south – three days of driving first over the border into Argentina and then down parallel to the Andean spine to Mendoza, one of the Argentinian centres of wine making.

It was with mixed emotions that I left Laguna Verde.  Its harsh beauty will remain with me.  It was the launch point for my most significant mountaineering achievement to date – and perhaps for ever.  But the thought of some home comforts after 10 days without a proper bed (yes – I am a softie I know!) was compelling.

We packed promptly the following morning, 4th December, and were then on our way though not before two groups of local caballeros had come from their nearby post for a dip in the pool within the hut.

The gravel road first goes east and climbs up to the border at the San Francisco pass at 4,726m.  Just before then we had our final view of Ojos del Salado.  At the pass the Chilean gravel road changes to an Argentinian paved road and the average speed increased from around 40mph to 70mph. 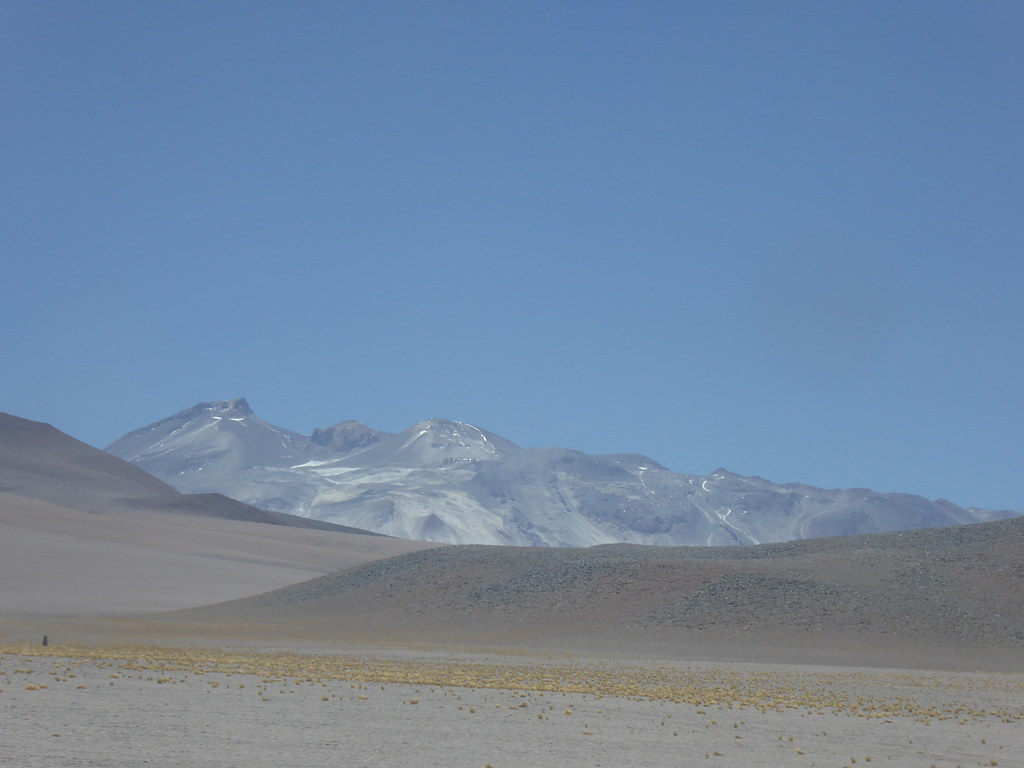 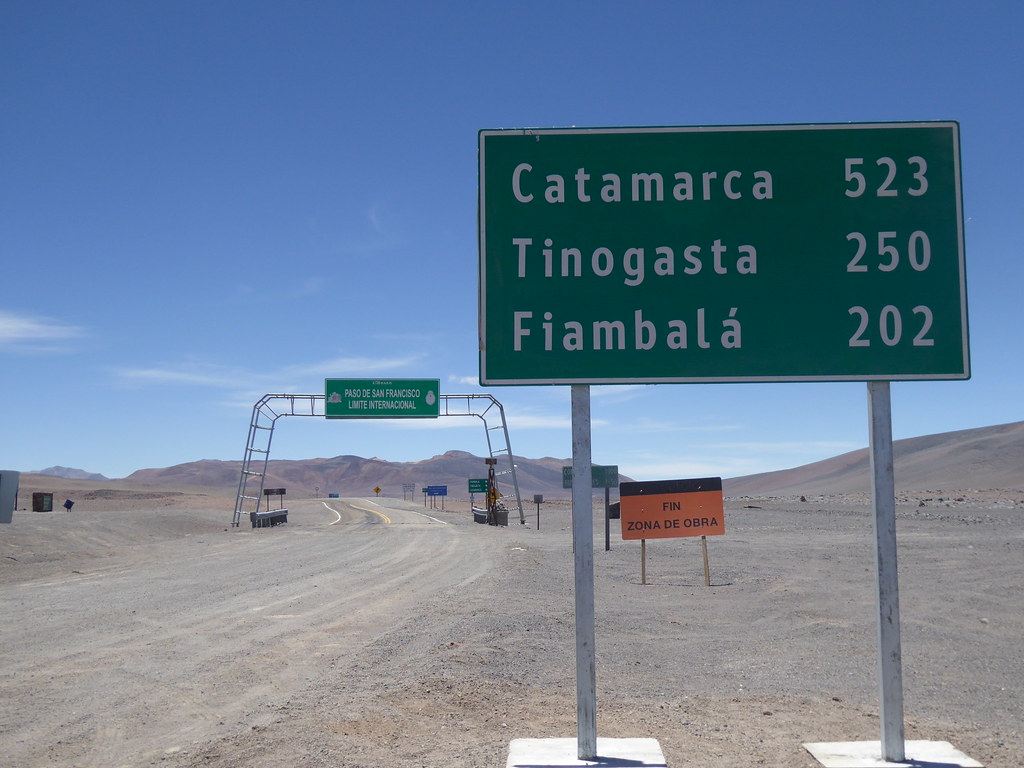 The border post is another 10 to 12 miles beyond. A barrier across the road prevented progress until the necessary formalities are complete.  This involved some form filling and a lengthy check of the paperwork relating to the vehicle.  Overall things took around 45 minutes before a chain to the side of the gate was unhitched and we drove around the barrier.

It was another 100 miles to our stop for the night.  We continued to descend.  The high, dry and cool Atacama desert was replaced by the lower, equally dry but hotter Catamarca desert.  I must say that the landscape was fascinating – all folds and differing colours – before debouching on to the flat valley floor on the approach to Fiambala. 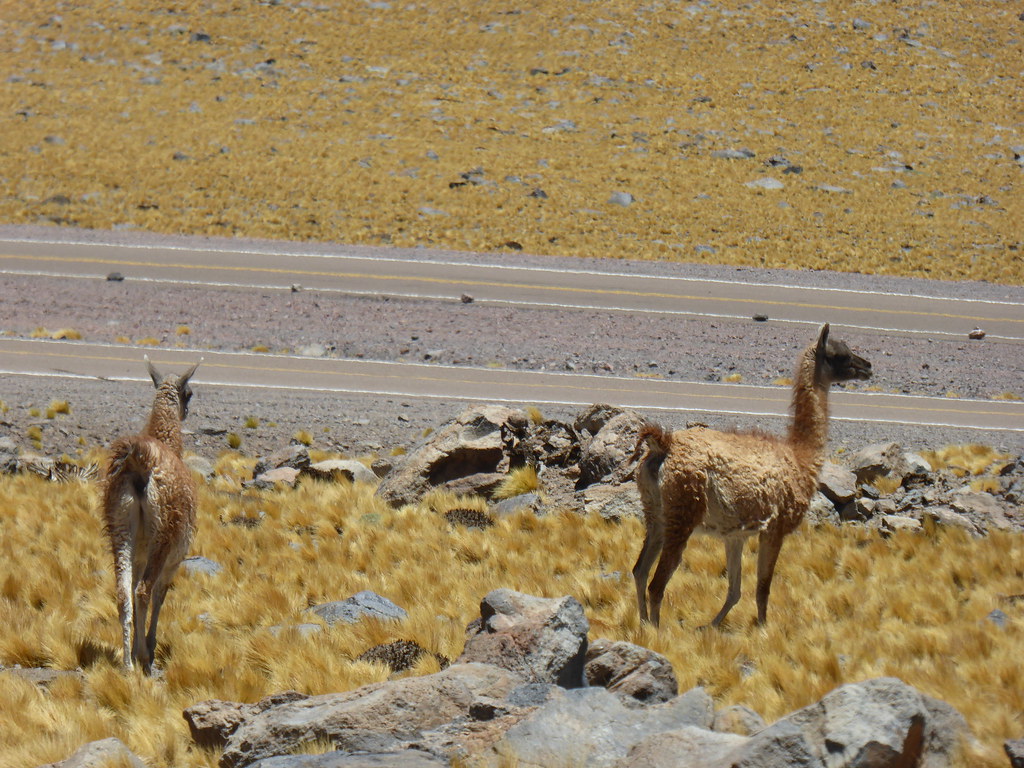 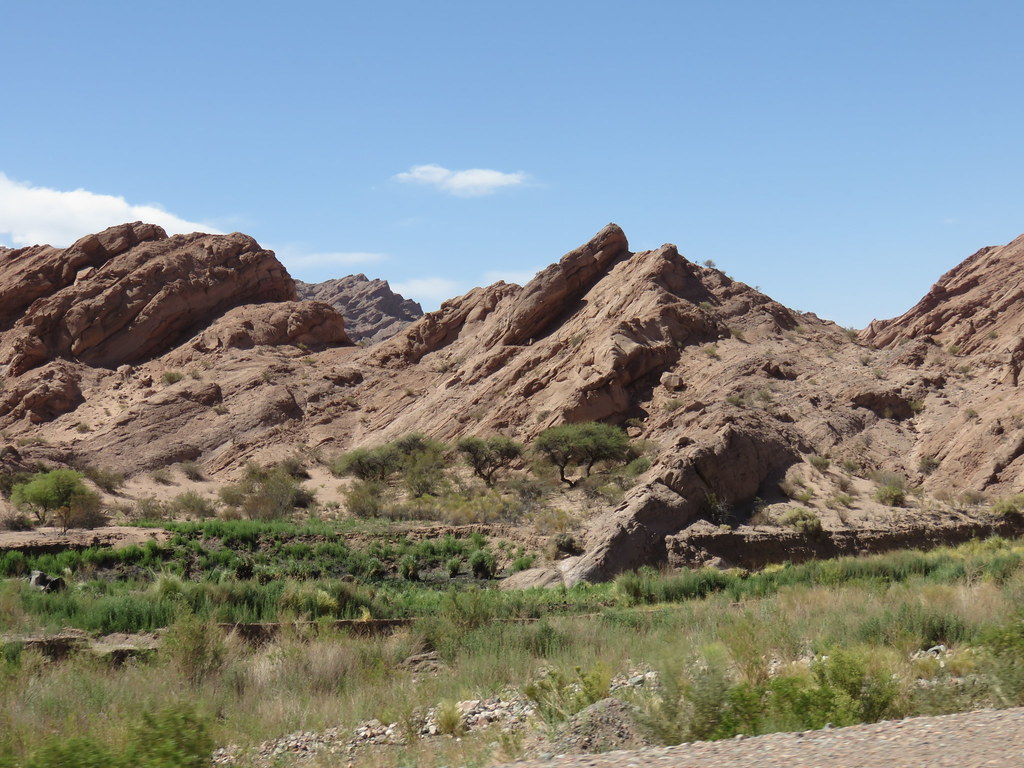 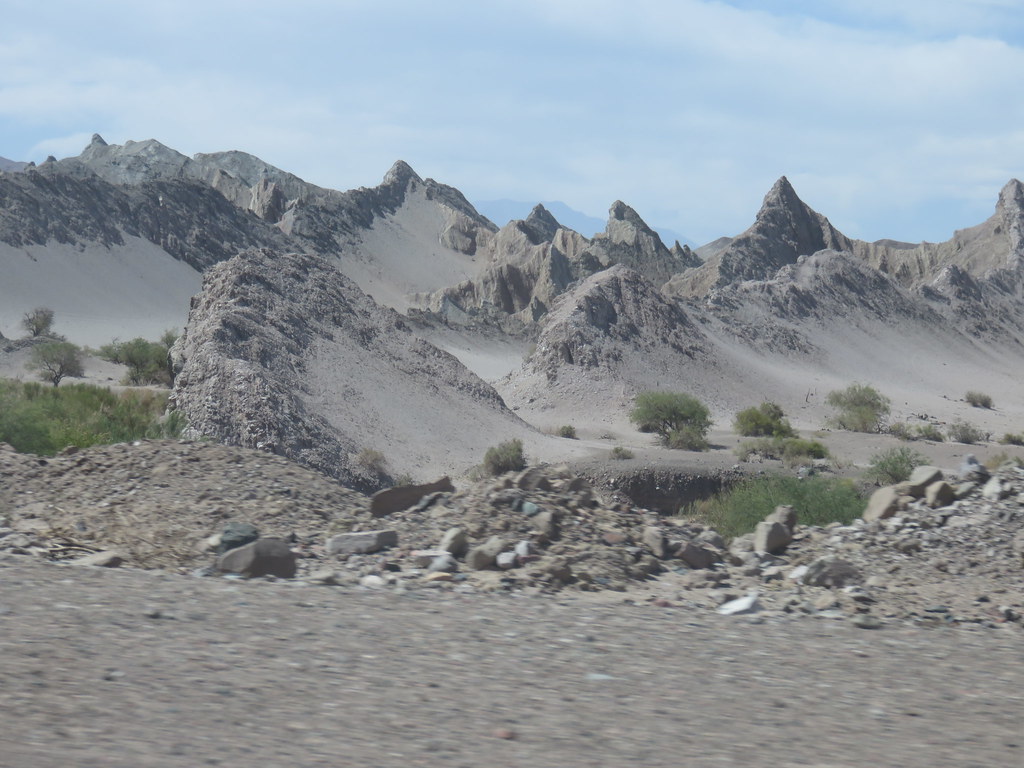 Fiambala was reached mid-afternoon and had a bit of a back of beyond wild-west feel to it.  As usual it forms around a town square with a few shops and a civic building around it.  A few people were lounging around in the afternoon warmth.  We pulled up outside a hostel not too far from the square.  The proprietor was not immediately to be found, so we sizzled in the car until he was.

The accommodation was basic but comfortable.  It had wifi, but the moment more than two people connected to it the connection ground to a halt.  That’s what happens when you are at the end of the network I guess.  Still it allowed for a few messages to be sent by email.

Derek and I had a wander around whilst it was still light.  Derek found one rather “amusing” facility that the local authorities had thought to provide for their disabled brethren. 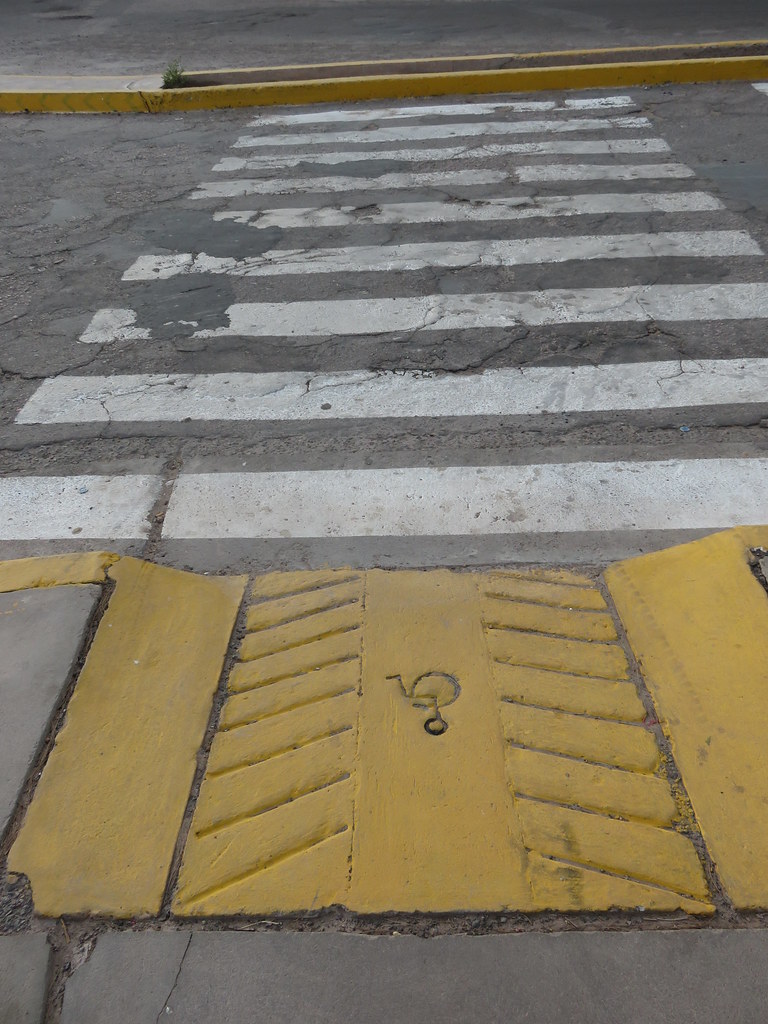 If you haven’t seen what’s wrong, then please look again. 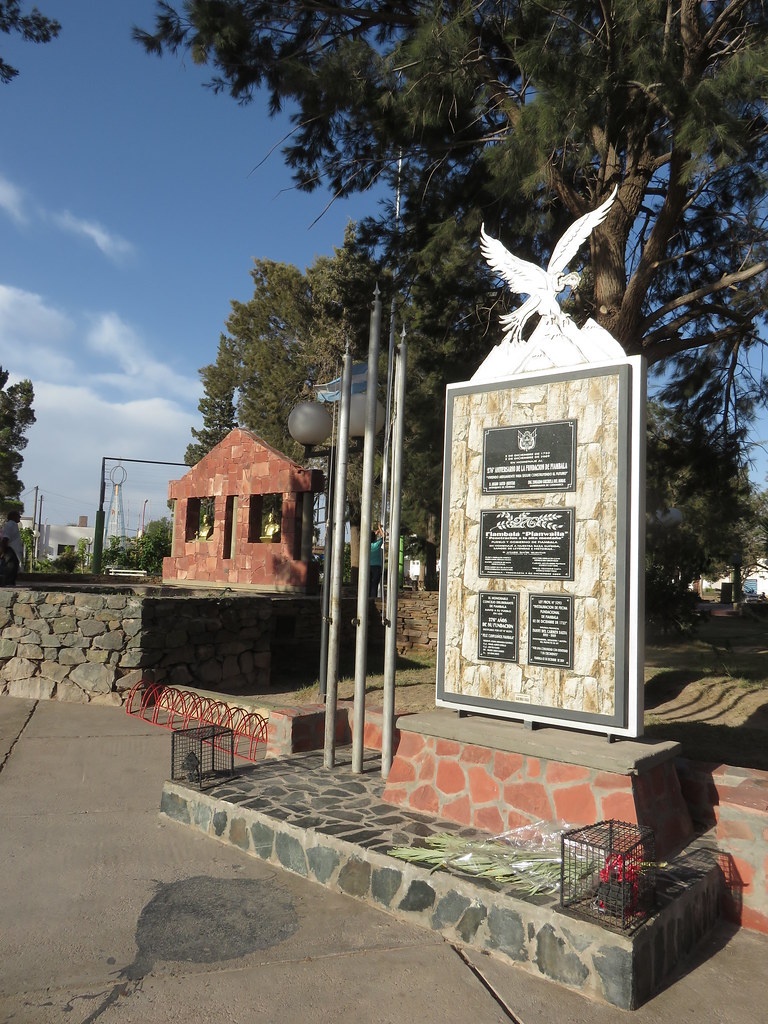 In the evening we found a restaurant.  We were early at 8pm so any night life had not really got going.  But we were tired, still recovering after the climb and lunch had just comprised spare mountain food – dried fruit, nuts, cereal bars and the like.

The meat staple is carne.  Although this is Spanish for meat, it is assumed to mean beef unless it is qualified in some way.  Argentina is famous for its beef, whether in the form of steak or contained within empanadas or as bife de lomo (a bit like a beef schnitzel with one or both of cheese and a batter covering) amongst others.  I had the lomo. Here the food was good but better was to come.

Over dinner it was settled that we would try to get to Mendoza the following day, rather than taking two days over it.

And what a long day it was, not helped I suspect by the fact that the most direct route was not followed.  The scenery was less interesting.  This was seemingly never ending flat, dry grass lands with the Andes receding to the horizon to the right and obscured by haze. There was the occasional interesting sight though! 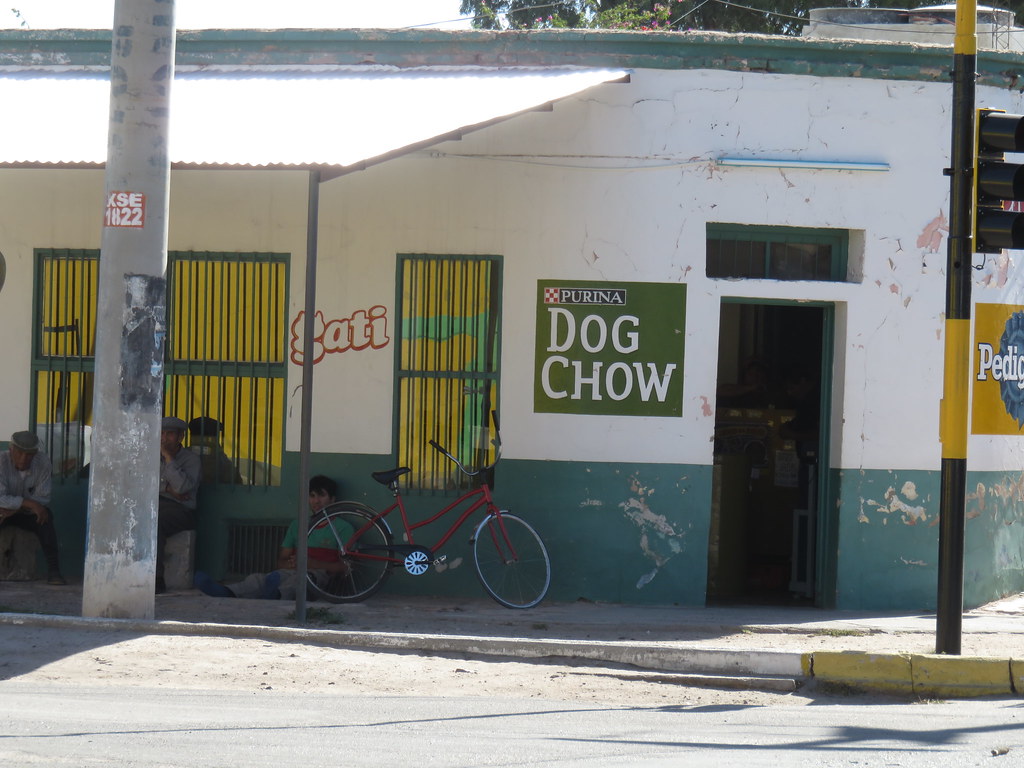 But as we approached as the sun was sinking ahead of us, we were treated to the most spectacular sight of the sun sinking behind Aconcagua and the mountains surrounding it. 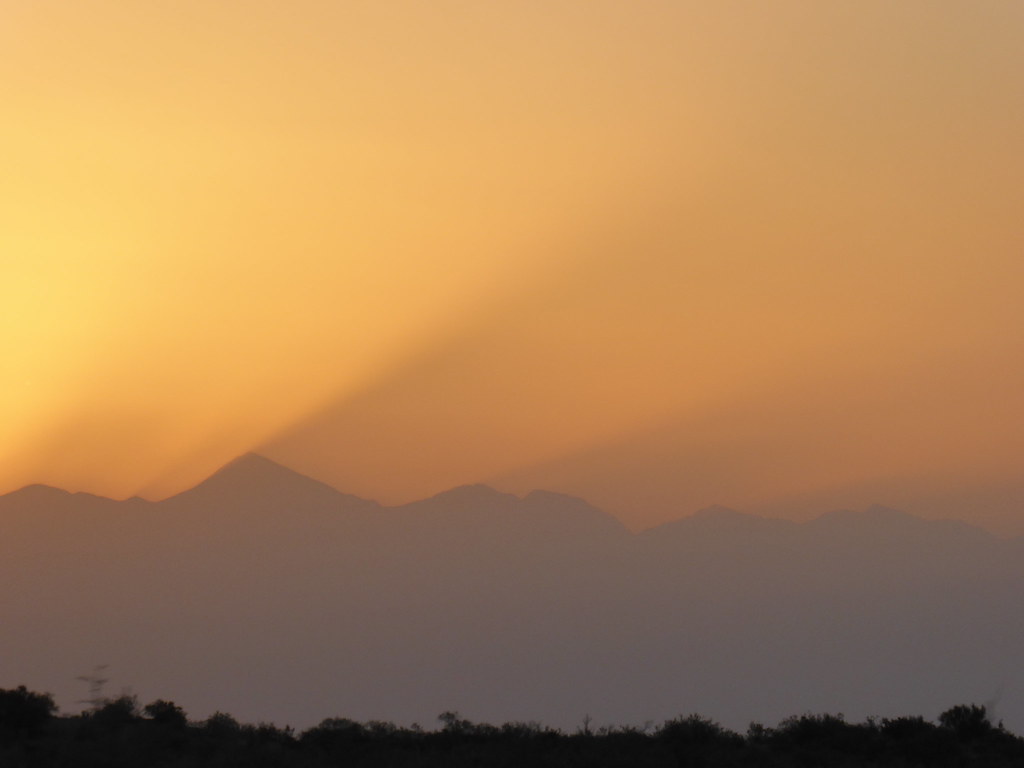 By the time we had settled into the hotel we were only up to a meal in the hotel itself.  Exploring the city could wait.  We would also need to obtain our permit to climb Aconcagua.