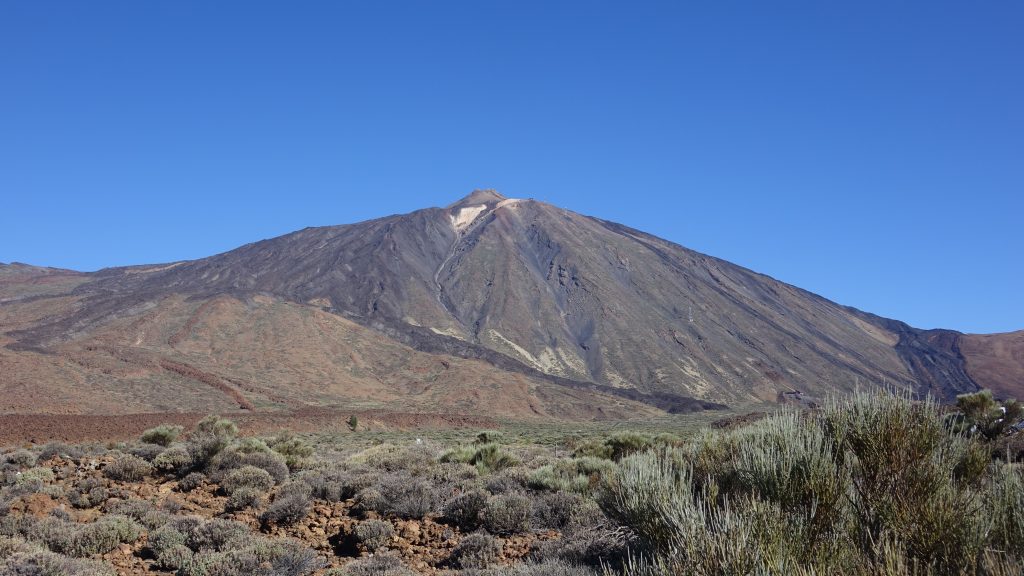 On this occasion I present my first guest post. My contributor will be known as the Reluctant Mountaineer.

It is no secret to those who know me that I don’t really do cold and wet, unlike my other half.  So whereas he is off up the mountains, in various weather conditions, my trips to high and jaggedy places are few and far between.  I agreed therefore to undertake an experience of climbing a volcano if I could do so in warm and sunny conditions, and be rewarded afterwards by being able to enjoy some R&R in said conditions.

Research was undertaken (by my other half), some training done and a Jet2 holiday booked to Tenerife for September.  Don’t be fooled, it wasn’t a Jet2 holiday as the brochures would describe, but the easiest and most cost efficient way of making the trip.  On arrival at our hotel on the Thursday evening we informed the receptionist that we would not in fact be in the hotel the following night since we would be in a mountain refuge; surprisingly she did not seem fazed by this.

Our objective was Pico del Teide (highest point on the island, and indeed in Spain, at 3718 metres).

The following morning after breakfast we packed up and found the bus stop for the Titsa bus (no sniggering please!) to the Montaña Blanca stop in Teide National Park.  There is only one service each way a day so we were early at the bus stop so as not to miss it.  We were not planning to make the ascent the easiest way.  This would be from the Teleférico del Teide (a cable car) which takes you up to 3500m, and a good job too as it was out of action due to high winds) nor the hardest way…..up and down in a day (too much for me to contemplate).

Our plan was an ascent which would show us more of the mountain scenery, but break the ascent into two days. On the first day we would ascend to the Refugio Altavista.  The next morning we would ascend/complete the climb to the summit of Teide, and then descend the same way and to catch the (only) bus back to Los Cristianos at 3:30 pm.

We started walking at 11:15am and the first hour and a half was easy along a vehicular track, and a steady incline.  It gave us chance to appreciate the weird, colourful scenery which at times gave the appearance of an alien planet.  We also passed by the Huevos del Teide (Teide’s eggs), boulders created by pieces of lava detaching from the lava flow and rolling downhill and gathering more lava as they do so.  They are accretionary lava balls.

At the end of the track we had half an hour rest and ate lunch, in the company of numerous lizards darting in and out of the rocks.  Above us rose, more steeply, a rough lava covered slope which we were to ascend.

I had expected another hour and a half to the Refuge but it took 2 hours 10 mins of unrelenting ascent.  Yes, I know it is a mountain, and they tend to rise upwards.  But even when the path took numerous zig zags it did not seem to alleviate the gradient; every zig and every zag was relentlessly uphill, and I may have voiced my frustration at times!  However, it was warm and sunny, so I probably should not have complained as much as I did.  [Editor’s note – I did remark at the time at how different the atmosphere was from other peaks I had climbed. The air was blue!]  And we had plenty of time to reach the Refuge, so I felt justified in taking breaks and admiring the views and the scenery.

On arriving at the Refuge we took in the expansive views, and I tried to regain feeling in my fingers which had gone numb with the cold despite the pleasant conditions.  Eventually we went inside to warm up.  The Refuge main area was open, but checking in and access to dormitories and kitchen is not available until 5 pm.  As soon as we could we made a warming hot chocolate, and then “enjoyed” a reconstituted meal.  The other half was actually feeling worse than me, having developed a dull headache already, and was struggling to eat; so I had the sticky toffee pudding all to myself!

As the sun went down we enjoyed spectacular sunset views, including seeing the shadow of the mountain on the clouds.

The drop in temperature, the prospect of an early start the following morning, and developing headache in my case now, all contributed to bedtime by 9:30.  The dormitory was full and stuffy, and sleep was disturbed, as is often the case at altitude.

We were awake early, along with everyone in the Refuge.  Our headaches had abated.  We emerged rather slowly; not as early a start as perhaps my other half had planned; but we got ready at a pace which we were comfortable with.  The Refuge was packed and busy in the bathrooms and kitchen.  After porridge and more hot chocolate we packed up and set out.

We were probably the last to leave the Refuge, though it was only 6:30 am and still dark.  I was confident I would be the slowest person making the ascent that morning, and the last to reach the summit, so setting off last wasn’t a problem; better than being demoralized when everyone overtook me.  Our only time constraint was being back on the road in time for the bus in the afternoon.  The early risers were trying to reach the summit for sunrise.  I had that experience on Mount Sinai, so didn’t feel I was missing out.  I prefer sunsets…….not a morning person!

We were well wrapped up against the cold, and using head torches for about 50 minutes.  I knew this would be necessary, and had been somewhat concerned, my eyesight not being brilliant, and I had a fear of tripping up.  In the event it was not as bad as I had imagined, though my pace was very slow.  The next hour was the worst, a long, tedious, unrelenting ascent. It was relieved only by the nice sunrise.

Time estimates for the ascent from the Refuge to the summit were one and a half to two hours.  No way would I achieve one and a half, but clearly two hours was also beyond me.  My slow pace was obviously bothering my other half since he took my rucksack for most of this section, carrying it as well as his own; and I took the large camera.  I knew we would pass the Teleférico station, and the object was to do that before 9am when guards would arrive to check if one had the appropriate permit to ascend on that day at that time.  By staying at the Refuge one avoids the need for such a permit, since you are beyond the check point early; another reason for the early start.

I had (mistakenly) thought the Teleférico station was about half way to the summit.  So I was increasingly frustrated, and concerned about the time as I plodded along.  We had seen the sunrise, the light was increasing, though the predicted winds were strong, and annoying.  I was very close to a toddler “are we nearly there yet?” tantrum.

Eventually we saw and then reached the cable car station.

It was now properly light, and getting warmer.  We had a 10 minute break to fuel up, exchange the rucksack for camera and gird our loins for the final ascent.  Although it was demoralizing that we saw so many people on their way down (so clearly we were the last), when I reached this point I finally felt confident that I would make it to the summit.  We had been able to see the summit for a while, but now it felt within reach.

I thought, and hoped, it would take a further 45 minutes.  So it was slightly disappointing that the final climb took an hour.  This was probably partly due to the wind, which was gusting to 80 km/hour.  At times you just simply had to stop and brace yourself against it.  The terrain was bouldery, and still relentlessly up and up.  In places near the top there were chains for support, which helped with the ascent, and as an anchor in the windy conditions.  Whiffs of sulphur punctuated the air.  We could see some monitoring equipment in the crater.

Finally, the summit, a small rocky crest.  Relief!  Hooray! Not sure which was the predominant feeling.

Although the views were expansive the windy conditions and cool temperature made it pretty unpleasant.  My sense of achievement was brief.  I quickly took in the views.  But then my overriding thought was to get down off the mountain.

The warm and sunny conditions returned and we descended the zig zags with ease; stopped to eat and renew our acquaintance with the lizards; passed numerous people slogging their way up; and made our way back along the track, wearily, but with a sense of growing satisfaction and a sense of wonder at the amazing landscape.  The route we had taken does enable you to appreciate the whole mountain.

We arrived at the roadside an hour early for the bus which transported us back to Los Cristianos….for a welcome nap [Editor’s note – if that is what you call two hours of unconsciousness], shower and dinner.  We were able to sunbathe by the side of the road as it was very warm, and with strong sunlight.  The following day we were sunbathing in the comfort of loungers beside the roof top pool of our hotel……going up and down the stairs to get there was decidedly less comfortable!  Later we explored the town, and the water front, with frequent stops for drinks; always good to rehydrate after mountaineering isn’t it?  And beer and Manhattan cocktail definitely help don’t they??