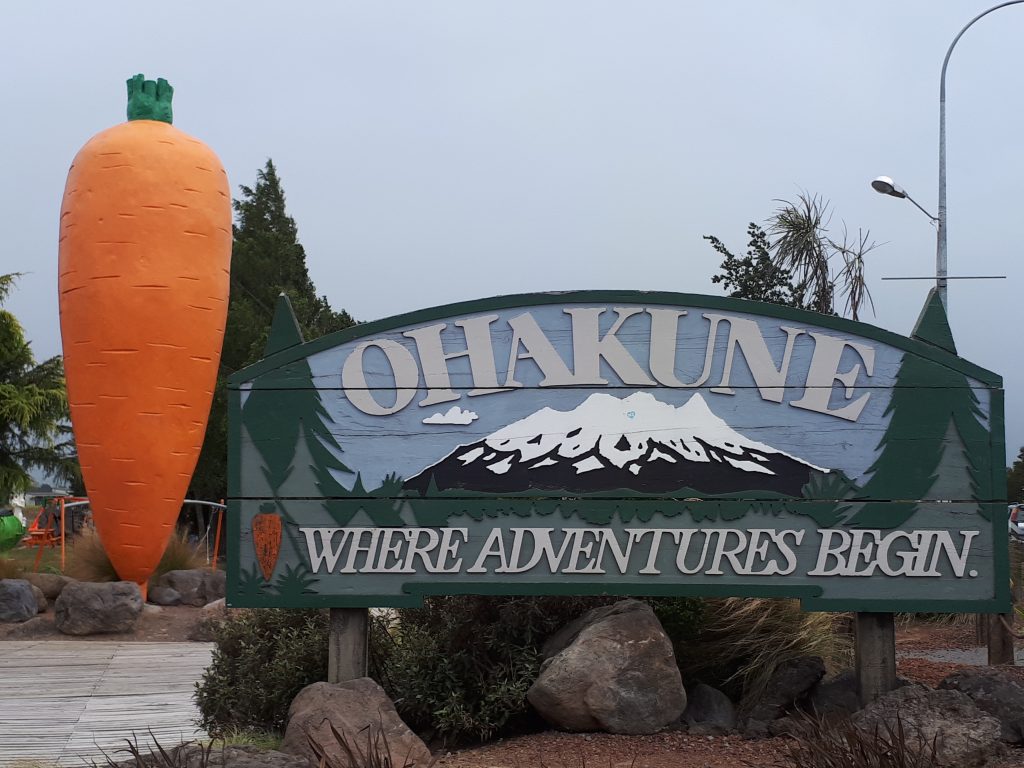 After Mount Taranaki I wanted to climb Mount Ruapehu.  Mount Ruapehu is the highest mountain on the North Island of New Zealand at 2797m (9177ft).  It is situated on the central plateau of the North Island near to Mount Ngauruhoe (of Mount Doom fame) and Mount Tongariro (of the crossing fame).

We had been staying near New Plymouth on the west coast.  Although Mount Taranaki was swathed in cloud as we left it was a nice day and the weather only improved as we drove eastwards.  We took the intriguingly named Forgotten World Highway which runs from Stratford to Taurmarunui.  This highway runs for around 150km through tortured landscapes, over four mountain saddles, through a one lane tunnel used by logging trucks and 15kms of unsealed gravel (don’t tell the hire car company!)

Along its route is the town of Whangamamona which declared itself independent in 1989 in a tiff about local authority boundary changes.  You can even buy a passport of the Republic at the local hotel.

We were on our way to Ohakune which lies to the south of Ruapehu.  As we reached the central plateau, a line of volcanoes faced us.  First there was Mount Doom (sorry, Ngauruhoe).

This was about the best view of Ruapehu that we were going to get.  I had allowed for two or, possibly, three days to climb it.  Unfortunately, Tropical Cyclone Fehi was on its way.  So the forecast was not good for the next couple of days.

So it turned out.  The main impact of Fehi was on the South Island where there was much damage and a couple of deaths.  For us in the centre of the North Island strong winds and occasional downpours associated with a frontal system came in with the storm.

Ohakune, in the New Zealand winter, is a ski resort.  Otherwise its claim to fame is that it is in the centre of the country’s vegetable growing industry.  There is only so much time you can kill drinking coffee in cafés and reading.  So we were forced to brave the weather and visit the town’s main attraction.

So there you go.  That’s Ohakune.

In undertaking my research for the Ruapehu climb, I had found very little on the internet.  Any information that there was normally related to approaches from the north west and the ski centre at Whakapapa.  These approaches take you to the northern edge of the crater but not to the summit.  Though you can buy one way lift passes on this side which can help.  One of the main features of the mountain is its crater lake.  It is well seen from any point of the crater rim.  From the northern approach the summit is some way around the crater.

Ruapehu is regarded as an active volcano.  During eruptions the crater lake tends to disappear and the mountain is famous for its lahars (mudflows or debris flows that follow valley bottoms that comprise pyroclastic materials, rocks, water and hot gasses).  So I guess that the tourist authorities steer people to the more relatively safe parts of the mountain.

There is a decent route from the south though.  From Ohakune there is a ski road to the resort of Turoa from where a start can be made.  The forecast for the day after the main impact of Fehi was a little better.  Predicted 60kph winds and dry giving way to lower wind speeds and showers.  It looked as promising as it was going to get over the next few days.  So I decided to go for it.

At around 8am on a grey and blustery day Julie dropped me off at the deserted Turoa ski centre.  I was a little nervous venturing out by myself on a mountain covered in cloud in a country that I was unfamiliar with with an unpromising forecast.  But I had map, compass and GPS with me.

Julie left to check out of our accommodation and I followed the service road beyond the lower ski buildings.  I was soon passing a substantial lagoon used, presumably, for snow making purposes.  Left and right of me, looking like forlorn daffodils, were the heads of a lot of snow making machines.

By the time I reached the Winter Garden at the foot of the main lift system I was in cloud.  With map and GPS I navigated using the ski lifts as handrails.  The service “road” continues beyond where shown on the map and winds its way upwards.

I had originally intended to find the lower end of the Skyline Ridge and work my way up from there.  However I changed my mind when I reached the bottom of the Gliding Gladys glacier.  The Skyline Ridge divides two glaciers, Gliding Gladys and the much larger Mangaehuehue Glacier.  In fact Gliding Gladys is quite a narrow glacier and as with many glaciers in the world in retreat.  It is also free from crevasses.

By now it was distinctly unpleasant in wetting heavy drizzle and strong wind.  I strapped on crampons and got out my ice axe, both of which I had brought from the UK.  I was able to make good time up the snow of the glacier.  With the rain and the above zero temperature, the surface of the glacier was pretty good for the crampons.

It was a bit of a head down affair so as to keep off the worst of the rain.  At a steepening of the glacier at around 2450m I decided that the snow was becoming too firm for comfort so I resorted to the rocks to my right to decrampon and have a quick bite to eat.

From that point I made a rising traverse towards the skyline to my right, just visible through the clouds.  This was over a mixture of loose rock and very grippy volcanic slabs.   At a couple of places there were some short sections of easy scrambling.  That skyline was the ridgeline of the Skyline Ridge.

I edged my way up the Ridge.  To my right I could see the top of the Mangaehuehue glacier.  At around 2750m the ridge suddenly narrowed.  Without the wind this would be a pleasant airy situation.  Fortunately, I managed to avoid the wind blowing me off.  Perhaps I was imagining it but the wind speeds seemed to be dropping though I remained in cloud.  I soon reached the summit, known as Tahurangi, after then.

Unfortunately there was no view to be had.  At least the rain had eased and the wind was bearable.  The cloud threatened to peel away from time to time with the occasional blue patch appearing above.  But it never lifted.  So I never had a view of Crater Lake beneath or of the crater rim beyond the immediate vicinity.

Here is a short video showing the conditions.

I waited a while wishing the cloud to lift.  I wandered along the crater rim for 50m or so to check that I was at the high point.  After 15/20 minutes I started to get cold so I left, abandoning my hopes of a view.

My return route was much the same though I aimed for access to the glacier higher up.  There seemed to be less of the annoying loose rock, or perhaps I was just managing it better.  Again I made quick time once on the snow.  The only slightly disconcerting element was the number of small stones on the surface of the snow – so rockfall may be a risk to be aware of with this route/approach.

As luck would have it the summit cleared about an hour after I had left it.  But the clearance was brief and clouds soon enveloped the summit again.  It was now also dry.  By the time I reached the bottom I too was dry. The wind speeds had not dropped as much as promised.

Here are some shots up and down the glacier and of some red rock.  I do not think that I have seen so much red rock on a volcano.

The Gliding Gladys glacier is the long ribbon of snow to the right and the Skyline Ridge is to the right of the glacier.

I was a little faster on the climb than I had anticipated and was able to take shelter by one of the locked ski buildings whilst waiting for my lift back to Ohakune.  That was fortunate because I arrived there just before the clouds moved in again and a torrential downpour developed.

So again it was a successful summit in a bit of a weather window.  The following day was brighter.  But the winds had strengthened again.  As we drove north to Lake Taupo the highest points remained covered in cloud.