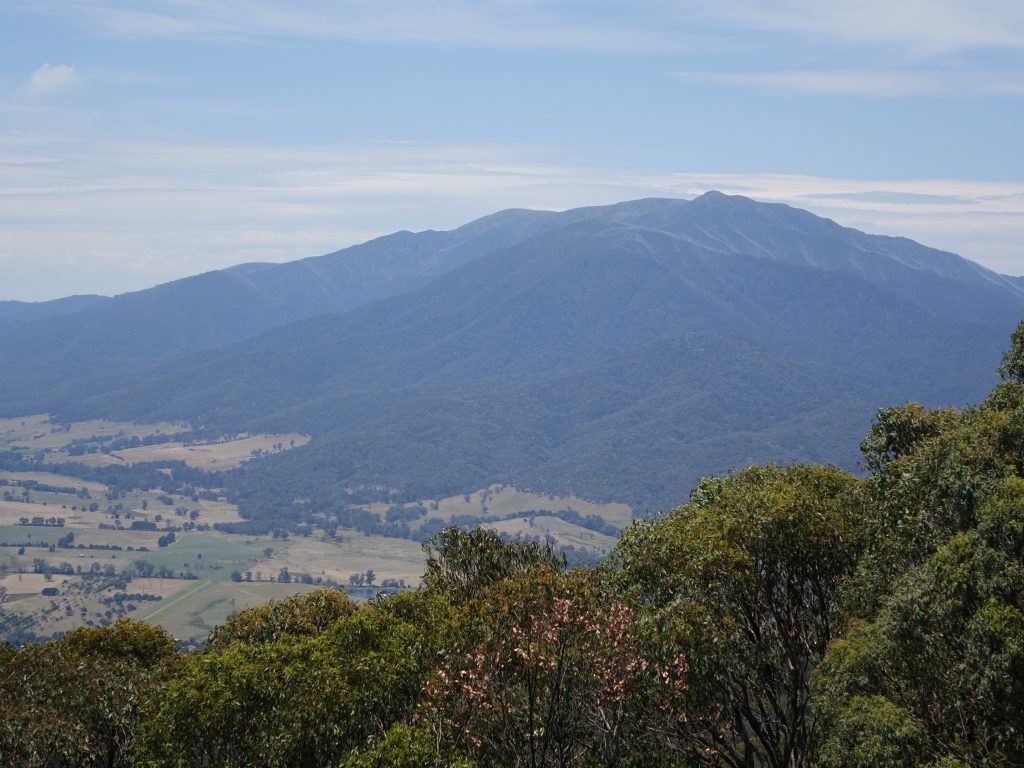 Having climbed the five highest peaks in Australia, our next objective was Mount Bogong.  We left Kosciuszko National Park and returned to Wangaratta a few hours’ drive to the south west.  Here we had to say goodbye to Dan who had to go back to work.  The temperature was in the low 40Cs.  We were positively melting.  We found a place to eat before dropping Dan off at the rail station and stayed the night at a local B&B.

The next day we had a pleasant drive of an hour and half or so back towards the mountains to the south-east.  We wound our way along the, perhaps inappropriately named, Snow Road and on to The Great Alpine Road to Porepunkah and Bright, two tidy towns set in the Ovens valley – an appropriate name considering the heat.  Soon after Bright we turned left onto the Tawonga Gap Road which lifted us up and over a pass along an occasionally steep road of switchbacks.

At the top of the pass there was a car park and viewpoint where we stopped for an hour to obtain some relief from the heat.  The view across the Kiewa valley ahead was to the next objective, Mount Bogong.  Mount Bogong is the highest peak in the State of Victoria at 1986m (6156ft) in height.  It has been thought of as the remains of an ancient volcano but this is probably incorrect – see my blog here. 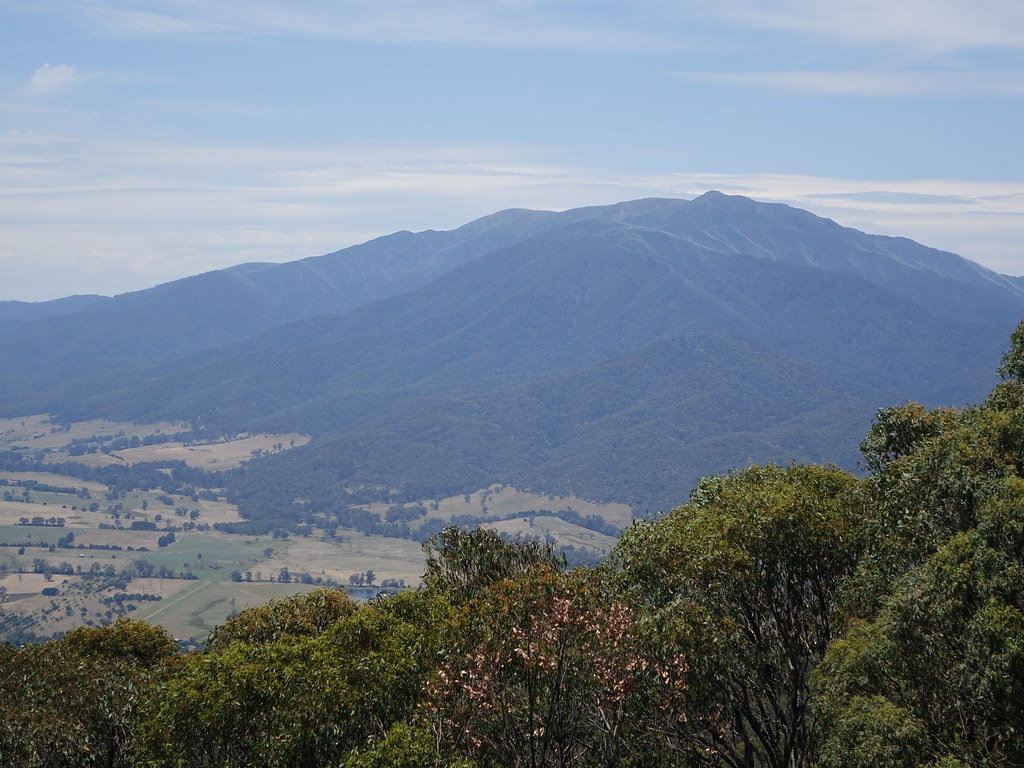 Bogong in the local Aboriginal language means “Big Fella”.  It is certainly one of the most prominent mountains in Australia.  It is also a significant location for the local indigenous people, being a location for collecting Bogong moths and as a meeting place for tribes far and wide.  Bogong moths were collected and eaten as a protein rich food.

Although of relatively modest height, Mount Bogong can be treacherous in bad weather as ways off the massive plateau that forms its summit are not always obvious.

After leaving the viewpoint we drove down into the valley.  Julie had organised an AirBnB in Tawonga South a small settlement near Mount Beauty.  Before going there though I decided to recce the start point for the climb which, weather permitting, I was hoping to do the following day.  So, instead of turning right toward Mount Beauty, we turned left and then after a couple of kilometres turned right along Mountain Creek Road to the picnic area and car park at the end of the tarmac road.

We duly then found our accommodation and I prepared for the following day.  The forecast was alright.  A weather front was moving in bringing with it some high cloud and strengthening winds during the afternoon.  I was always intending an early start and this forecast confirmed the decision.

So I was off the following morning at 5.30am.  There was one other vehicle in the car park but I was to see no-one else that day.  There was also someone camping just behind the car park with a car adjacent to the tent.

A 4WD track exits the back of the car park with signs pointing the way.  Just over 2km and five stream crossings later I reached the bottom of the Staircase Spur.  There is little risk of being cut off should it rain because each of the stream crossings has a pedestrian bridge .

It is not possible to miss the start of the trail up the Spur.  A sign shows the way. 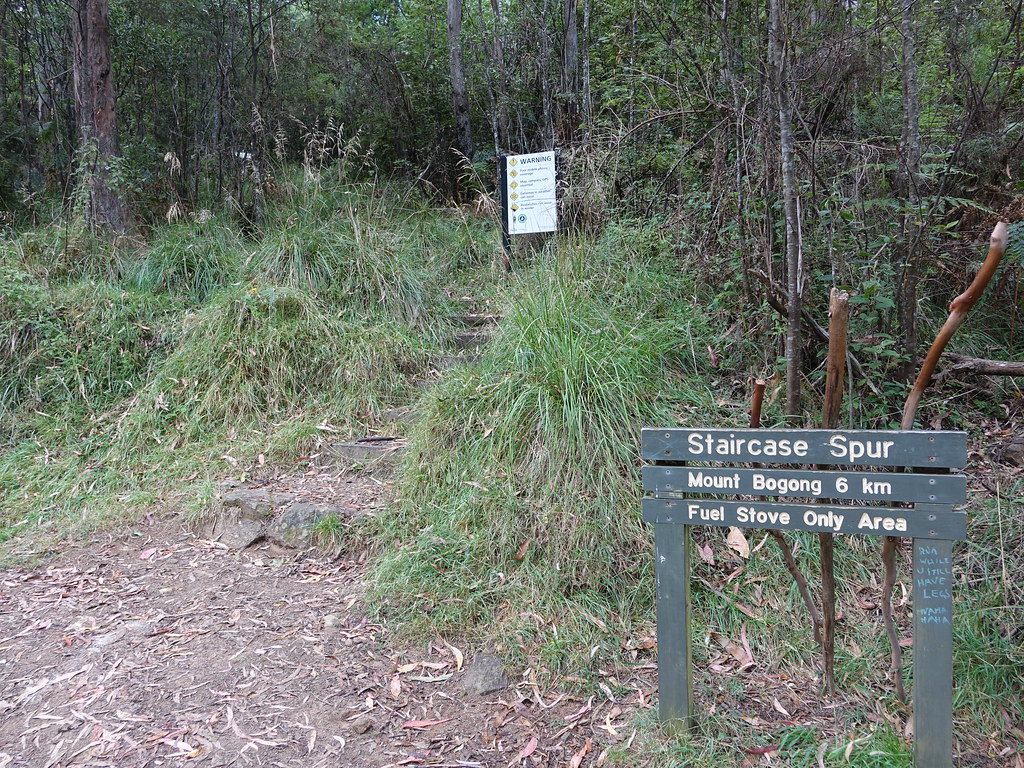 The sign at the start indicates that it is 6km to the summit of Mount Bogong.  Wikipedia describes this Spur as “a difficult ascent due to its steep slopes”.  I did not find the path as steep as suggested.  Topographically, the Spur rises in a series of series of steeper sections interspersed with occasional more level ones – hence the name of the Spur.  But the path is fairly relentless as it winds its way up amongst the snow gums. 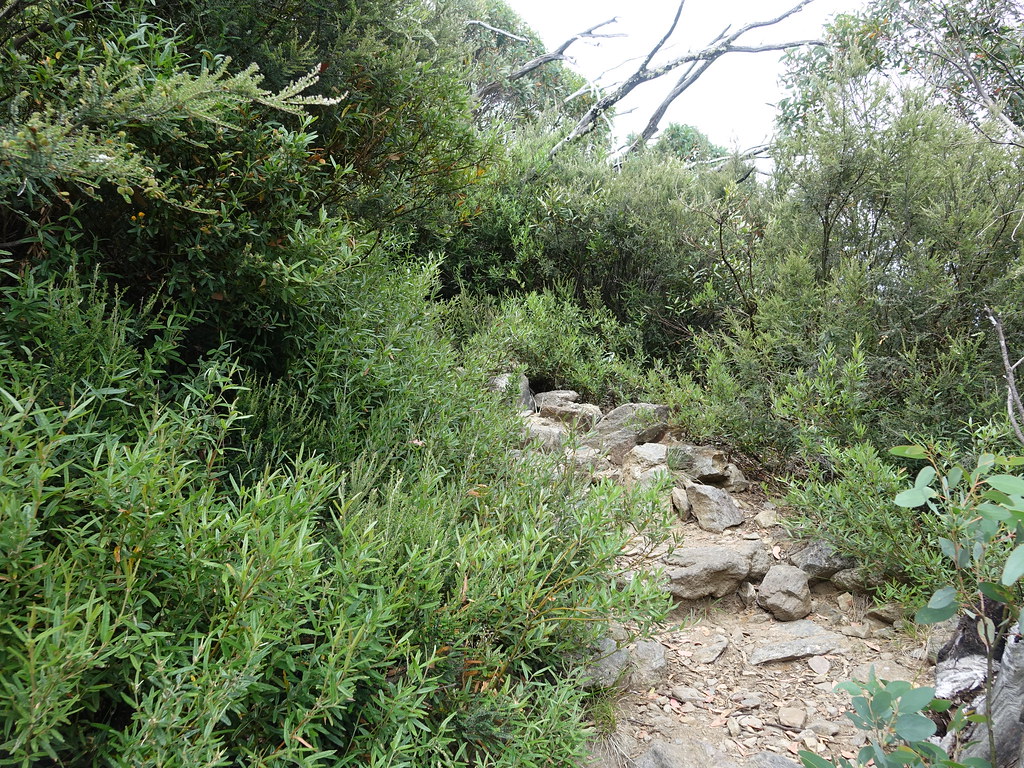 Only in a few places did the trees open up so as to give views. 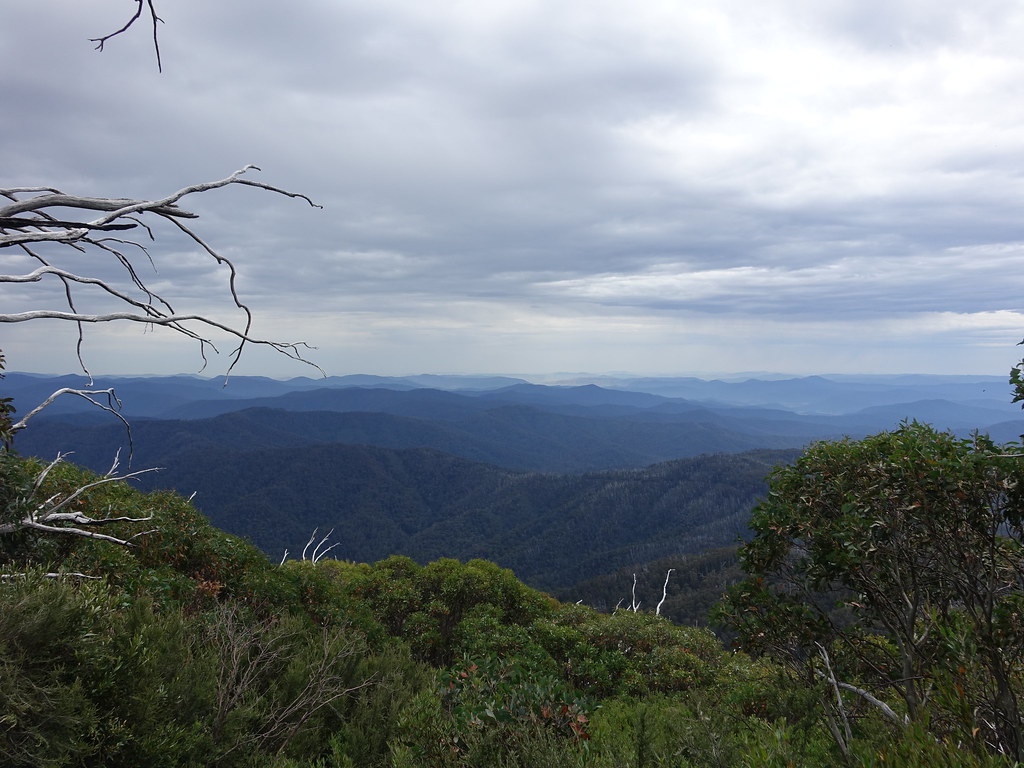 Half way up the Spur is the Michell Hut with adjacent drop toilets.  The hut is supposed to be used in emergencies only.  I went in to have a drink and something to eat.  Although the promised cloud cover had arrived, it was still warm.  The trees sheltered any breeze that there might have been.  In the hut was a bench, a lot of cut wood with a wood burner, a table and sleeping platforms. 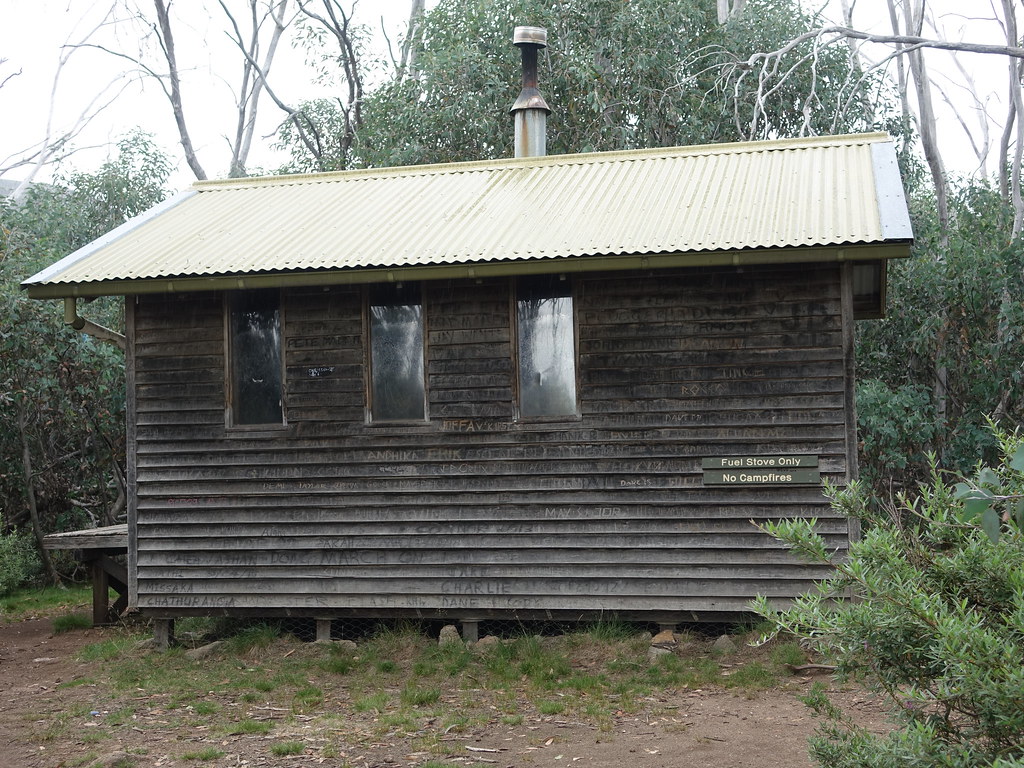 The path is obvious all the way to the top and follows large wooden posts once above the tree-line.  Above the tree-line it also became distinctly cooler in the strong breeze.  The landscape opened up abruptly.  No scattered trees.  One moment trees, the next open heath covered slopes. 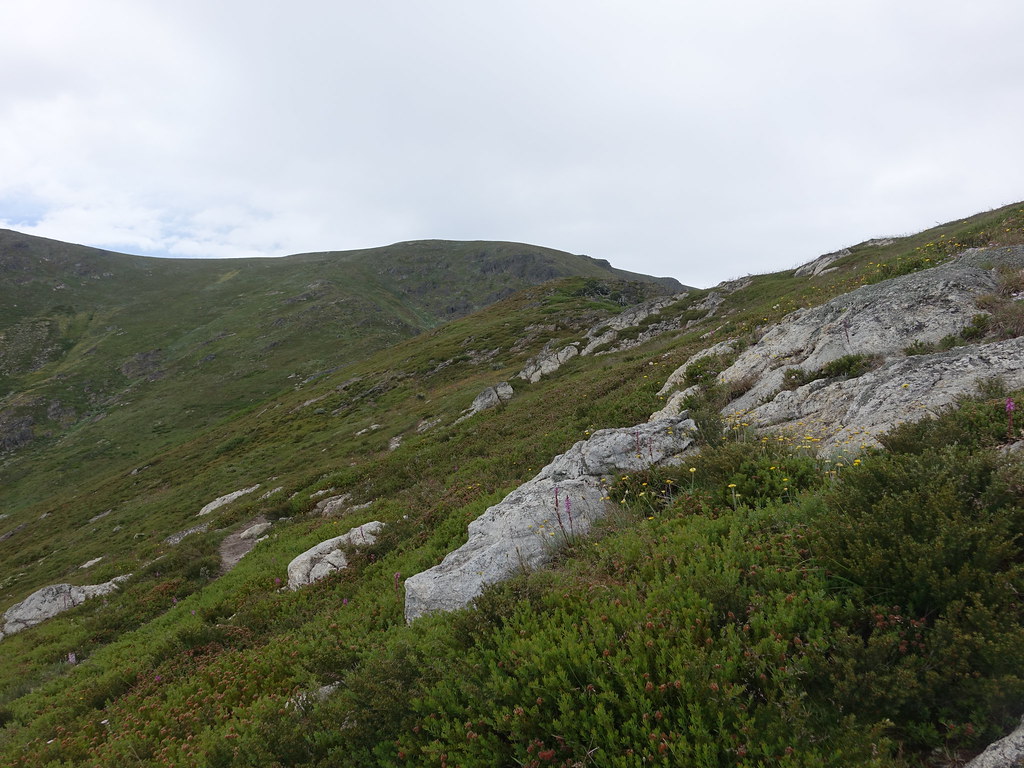 As if to emphasise how treacherous this environment can be, I passed a memorial to three people who died here in 1943.  Of course, on this day, the conditions were far more benign for me. 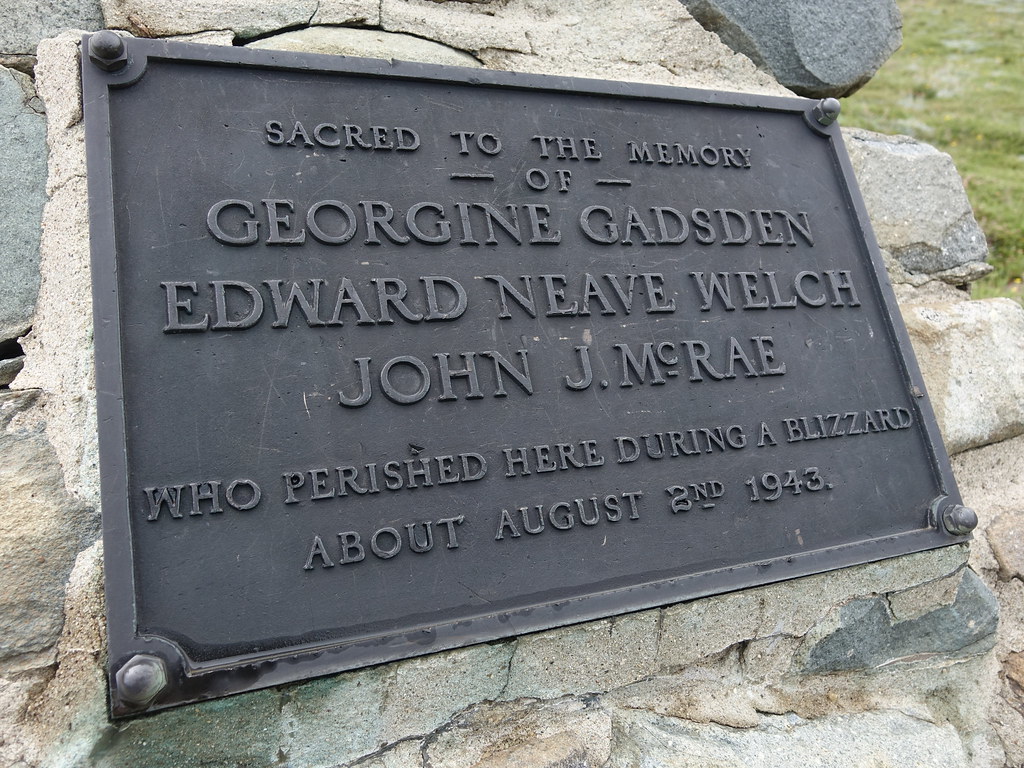 The Spur continued in a pleasingly narrow way until the plateau was reached. 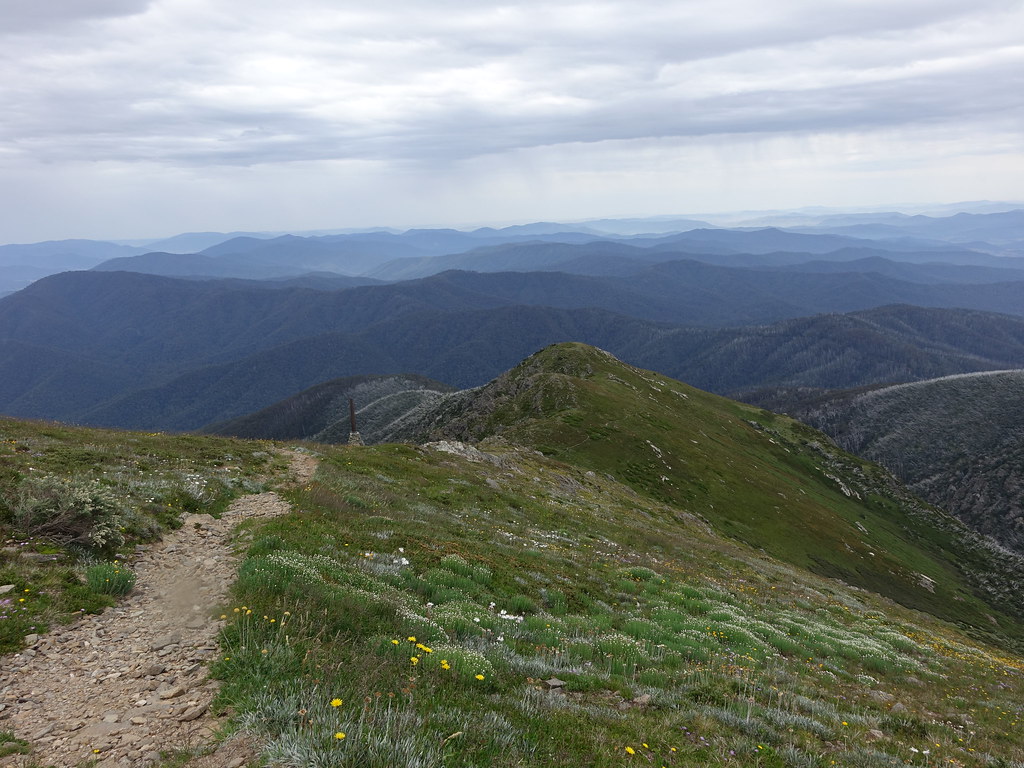 The summit cairn was just visible on the skyline to the right. 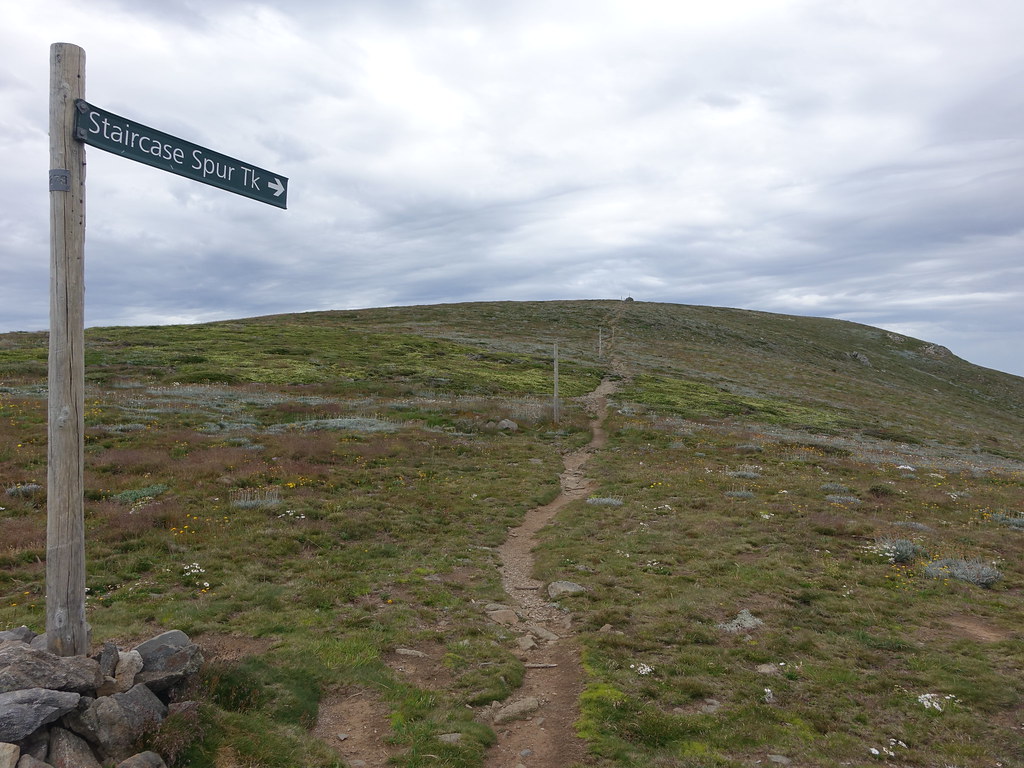 I was soon up to the cairn.  The views were expansive, if a little gloomy.  They included Mount Buffalo and its Horn that I would do the next day about 60km to the west.  Here is a short video I took at the top.

The wind gusted freshly across the broad exposed plateau.  After I had scaled the large cairn, I then used it as a shelter whilst I took in some more food and drink. 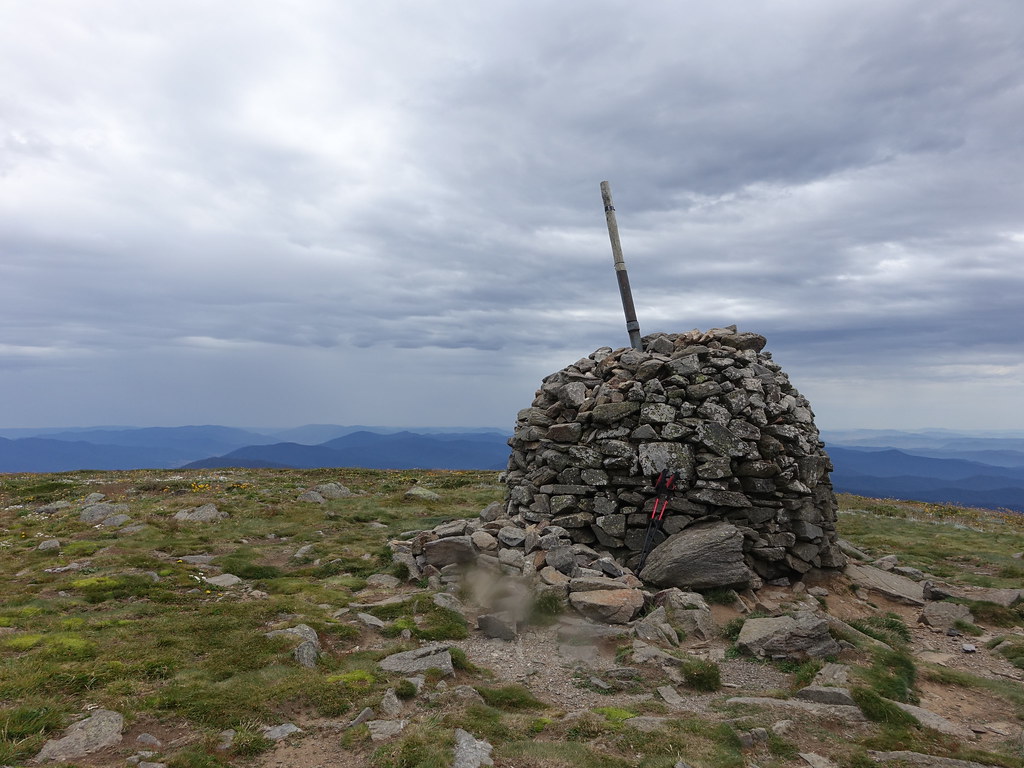 It had taken me about 3 hours from the foot of the Eskdale Spur and it would take me about 2¼ hours to make the return trip, including stops at the hut half way and at the top.

I returned the same way.  As I was speeding down the path back in the trees, something caught my eye just ahead of me.  I stopped a couple of metres short of it.  There, on the path, a red bellied black snake also stopped.  I looked at it and it looked at me.  It had no doubt felt the vibrations I was making as I pounded down the path.  Eventually, it decided I was not going to attack it and it slithered off to my right.

Just 15 minutes later I then had a very similar experience.  This time the snake was much larger but it was already making its way into the undergrowth to my left.  Of course, on neither occasion was I quick or brave enough to find my camera to take pictures of either of them!

The rest of the descent passed without incident and I was back in Tawonga South by 1.30pm.