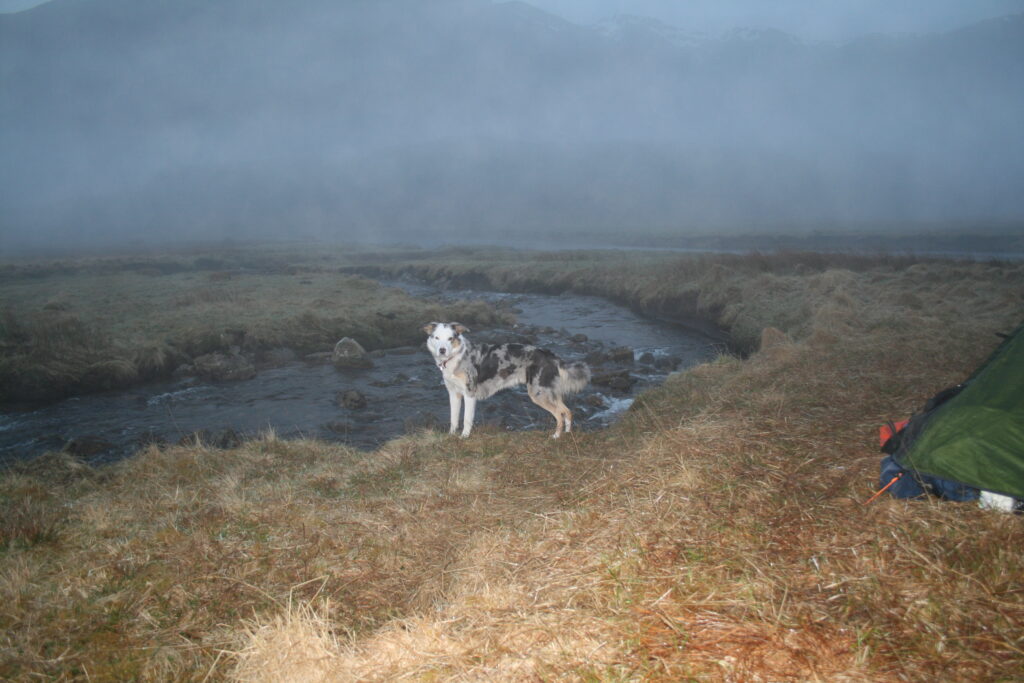 I have been up Glen Affric a few times.  It is indeed, as many say, one of the most scenic glens.  I have been up there both on foot and by bike.  Both are great.  On foot you get the chance to savour more the beauty and grandeur of the upper glen.  The bike though gives you the opportunity to cover greater distances and get to some of the remoter points and out in a day.

So this is not the WH route.  But I wanted to pick off a few tops as yet untrod by me.  I had also been fascinated by that path shown on the map that makes its way up from the col between Mam Sodhail and An Socach and is shown as stopping at around the 1,000m contour.  This might prove to be sneaky way up to the southern arm of Mam Sodhail having previously used the Coire Leachavie route (which I would recommend).

So it was that Jet and I set off from the car park at the end of the public road at the east end of Loch Affric at about 7pm.  We had come up from Yorkshire that morning (early) and nipped up and down Beinn Chabhair before continuing our way north.  There was, I thought, still going to be sufficient light to make our way up the glen and find a site to pitch the tent.  The weather was good and the forecast set fair.

I decided to follow the right of way along the north side of Loch Affric rather than the forestry track along the south.  Even of foot I suspect that the forestry track is quicker but I think the right of way is more picturesque.  The path seems to have been improved and re-aligned around the Affric Lodge grounds and the going is generally good.  After recent rain together with snow melt some of the side streams were fairly boisterous but there were sufficient rocks to step across on.  The path passes through attractive woodland and gently raises above and distances itself from the Loch.

The light dimmed.  But I could make out the black sheen of Loch Coulavie and, further away, Loch na Camaig.  But by the time I reached the junction with the track the swings in from the south of the Loch it was dark.  I had planned the approach from memory and had underestimated the distance.  It is almost 10 kilometres from the car park to my target and I had another two kilometres to go.  But the night sky was light enough to see unaided.  Jet plodded behind.  He was used to curling up in comfort at this time of day.

At last I reached the bridge that crosses the Allt Coire Ghaidhail.  A few hundred metres up the slope I could make out the glow coming from a tent.  I followed the stream down towards the River Affric and found a suitable spot to pitch the tent (had I gone a hundred metres or so further on there were better spots).  I got the stove going as I set up the tent.  Dinner was soon ready.  Just as well as it was 10pm.  But it was beautifully still; the stars shone in the moonless sky, unaffected by any human light pollution.  The stream roared by nearby and we drifted off to sleep.

Pre-dawn light woke me.  We emerged from the tent to a world of whispiness.

Damp air had settled in the glen overnight.  The tent and the grass were saturated.  But the surrounding peaks were visible through the mist.

And then we were greeted to a sunrise down the glen.

Dog and I fed, the wet tent was soon down and we were on our way.  Back up to the bridge to find the path that takes you into Coire Ghaidheil.  I passed the other camper but he was determined to hurry on his way and we just grunted our greetings.  The path is quite strong, but we lost it temporarily in a large patch of bogginess.  At rises at a gentle gradient until the corrie wall where it swings left to climb before weaving through knolls to the broad bealach and a crossroads of paths.  Straight on a further stalker’s path descends into Gleann a’Choilich and Loch Mullardoch.  To the left there is a trail up to An Socach.  To the right was the stalker’s path up the back of Mam Sodhail.

After a brief refreshment stop, we turned right.  The path soon steepened and angled up across the slopes.  It did not disappoint.  Even with the heavy pack height was gained quickly and views opened up to the north and to the east.  The views towards Sgurr nan Ceathreamhnan were particularly fine.

I left the path just before it started to level out and made my way directly east up the final steep slopes to appear just north of spot height 1068.  I went to that point, dumped my sack and circled around to Creag Coire nan Each.  There were long distance views to Mam Sodhail with Carn Eige peeping over its shoulder.

Back to pick up the sack and then to point 1108 where I left the sack again for the out and back to An Tudair.  There were fine views down to Loch Affric.

Back to the parent peak.

And across Coire Coulavie to Creag Coire nan Each (which did not look as though it deserved its “top” status from here).

So it was back to the sack and north east to Mam Sodhail.  I could see specks climbing the final ridge up to Mam Sodhail having come from Sgurr na Lapaich.  The headwall of Coire Leachavie was still plastered in snow – so approaches from there would be tricky without at least an ice axe.  The ground is stony and straightforward and a path appears.  Snow filled the ruined bothy just to the south of the top.  But the summit area was largely snow free.

Although a beautifully clear day, there was a stiff and cool easterly breeze.  A group was sheltering a few metres down the slope to the west of the summit cairn.  I persuaded Jet to jump up on to it and then we both slipped down inside it.

Although a beautifully clear day, there was a stiff and cool easterly breeze. A group was sheltering a few metres down the slope to the west of the summit cairn. I persuaded Jet to jump up on to the cairn and then we both slipped down inside its bowels out of the wind. Next I fired up my stove and made myself a hot chocolate – just reward for hauling the heavy sack. I bribed Jet with a few dog biscuits. We spent a good 40 minutes on the summit. There were a few people about but, considering the weather, not as many as I might have expected. Distant views were a little hazy, but the panorama was stunning.

As I was top bagging I did not do Carn Eige, unlike everyone else I met. Instead I went east along the long ridge to Sgurr na Lapaich over Mullach Cadha Raineach. And what a fine stretch that is. A high level promenade with great views left, right and straight ahead. Here is a view back to Mam Sodhail and Carn Eige from Sgurr na Lapaich.

And Jet at its cairn.

So it was off down its south east ridge where there is a path, sometimes eroded. The guidebooks recommend a trek east from the foot of the ridge across to the stalkers path that leads you just to the east of Affric Lodge. That recommendation is probably right. However, I passed by a lochan at point NH166236 and took to steep heather slopes straight towards the right of way below. Those slopes were a little unpleasant and then the barrier of a deer fence was met. So it took a while to find a way to get the dog past it. Once back on the right of way it was a straightforward walk back past the Lodge and to the car park – a leisurely 7 hour round.