Any person who has looked at my “bucket list” on this site will note that one mountain listed is in Iran.  This is Mount Damavand, a high volcano that is located not that far north of Tehran.  In fact only around 40 miles to the north.

So that is where I am going next and I leave on 31st July on Turkish Airlines via Istanbul.  I am in a group of seven with, I hope(!), local guides.  The trip has been organised through Adventure Peaks, a company based in the Lakes.  I do not know any of the seven and I do not know much more about Iran.  But it should be quite an adventure.

I will do some write ups about the trip on my return.  Wish me luck!

The weather forecast looked OK, so I made a last minute decision to go around the Yorkshire 3 Peaks for the second time in 5 days yesterday.

Some may question this behaviour as obsessive, or compulsive.  They may be right!

I did the traditional round – in other words that starting at Horton in Ribblesdale.  I was at the top of Pen-y-ghent in just over an hour.  As with Sunday, the cloud kindly lifted as I reached the top.  It took me four further hours  to reach the summit of Whernside.  There was more rain around today, including one sustained period on this ascent.  But the clouds stayed high.

The wind was as strong as on Sunday (about 20mph) but it seemed warmer.  The weather then just kept on improving.  In a further two and a half hours (including a stop for food on Whernside) I was on the top of Ingleborough.  It was then a pleasant canter back to the start in my regulation time of just under 9 hours.

I feel far less fatigued today than I did on Monday after Sunday’s round, so I take that as a good sign.  That is particularly the case given I did the “longer” option.  As a result of erosion, the official 3 Peaks route no longer follows the original (traditional) route in two places and is, instead, replaced by good paths built so as to withstand the weight of footfall.  This adds around two miles to the route.  Yesterday I did the (now) official route.  On Sunday I followed the traditional route in one of the two places, so saving myself a mile or so.

So that is it for my heavy training as I allow my body to enjoy some recovery before I depart to foreign pastures at the end of next week.

The Yorkshire 3 Peaks walk is becoming one of my staples.  I did it three times during September and October last year in the lead up to my South America trip.

I am in training again.

This was the 10th time I have completed the round but the first where I have started from Ribblehead with its grand viaduct that carries the Settle-Carlisle railway line.  Our summer has been pretty non-existent to date.  Today was no exception with the tops covered at first and showers whipping through on the cold (and fairly strong) wind.  The weather improved throughout the day with the clouds lifting and breaking but only allowed me to strip down to my base layer top on descending the final summit of Whernside – any warmth in the sun being negated by the wind.

I did a pleasing sub-9 hour round, though that is nothing to brag about given the record.  Being contrary I did the route in a clockwise direction to get the long trek between Whernside and Pen-y-ghent out of the way early on.  As ever, notwithstanding the weather, there were quite a few others undertaking the challenge.

English is in parentheses because, in truth, this is a misdescription.  The Corbetts are hills in Scotland between 2,500ft and 2,999ft with a prominence of at least 500ft.  As the hill historian will know, these hills were first catalogued by John Rooke Corbett, a district valuer based in Bristol, and published after his death in 1949.  Corbett was the fourth person (and first Englishman) to complete all of the Munros in 1930.  He was also the second person to complete all of the Munro tops and, almost certainly, the first to climb all of the Corbetts.

So the “English” Corbetts are the hills in England that meet the Corbett criteria of height and prominence.  There are 18 of them as follows:

A few years back I had had a splurge in mopping up ones undone on this list, many having been climbed (sometimes a number of times) in the years BC*.  But I managed to miss out the last on the list, The Cheviot, which has the distinction also of being the highest point in Northumberland.  All but the final three are in the Lake District.  Cross Fell and Mickle Fell were done in true winter conditions, though that probably made Mickle Fell easier.  Instead of having to tramp through heather and bogs, all of that was covered in firm snow and done under gorgeous blue skies with just the slightest breeze.

So as a birthday treat, Julie took me up to Wooler for an overnight in a nice B&B before an attempt at The Cheviot.  Wooler is the nearest town to The Cheviot.  Wikipedia has a good description of Wooler “as being “situated in an ill-cultivated country under the influence of vast mountains, from whence it is subject to impetuous rains””.  Fortunately the weather forecast was a little better for us.

On the Saturday evening we had a nice pub meal in the Percy Arms Hotel in nearby Chatton.  Fortunately they were able to accommodate us as we had not booked.

Sunday, 12th July 2015 saw us driving the narrow roads between Wooler and the rather pretty Harthope Valley and thence almost to Langleeford at the end of the public highway.  Here, on the left, was a large grassy area on which to park.  A few cars were there already.  As were some sheep, nibbling at the car park surface.

We were soon ready to go.  I had decided on an anti-clockwise circuit over Scald Hill and then to The Cheviot followed by Cairn Hill and then down the upper reaches of the Harthope Valley.  The first few hundred metres were along the road to a car turning place where a chap was being dropped off by his wife.  Here a finger post signed Scald Hill as being 1½ miles.  We duly followed the instruction and within metres the track split in a manner not shown on the map.  We took the (correct) left fork and had a short steep rise up on to the moor.

From here the route was obvious as we trended westwards.  The gradient lessened slightly around the 400m contour and then even more at 500m where a path joined us coming from Broadhope Hill.  Scald Hill is little more than an insignificant eminence on the journey.  Here we were passed by the solo chap.  After a slight dip to a boggy col, there is just short of 300m to ascend over a couple of kilometres.

Up to 800m the slope is fairly steep and I used it to test out my fitness, leaving Julie behind.  At 800m a stile is climbed, a path joins from the north and a flagstone path begins.  Years back The Cheviot had the reputation of being one of the most unpleasant British hills to reach the top of, its summit trig standing proud in the midst of a sea of glutinous peat.  As with my experience on Mickle Fell, it was often easier to climb in the frozen depths of winter when the bogs were frozen and covered with snow.  These days it is far easier as the flagstones take you over the summit and then on to Cairn Hill providing also a useful navigation aid when the cloud is down as it was when we reached the summit plateau.

The tramp across the plateau is around 750m and the height gain is minimal.  Although the cloud was down it was showing every sign of lifting.  Indeed, as we reached the trig views began to be seen under the blanket of cloud.

The lone chap was there.  We each put on an extra layer to keep the chill wind off.  I climbed up on to the plinth upon which the trig was set.  We had a chat with him.  He was ticking off county high points and was off to do the highpoint of Roxburghshire.  He left us and a couple with a pair of dogs arrived as I descended from my lofty perch.  They were locals and we had some lunch together in the lee of the plinth.  Then another couple with two more dogs arrived but then promptly did an about turn and left.

Having taken some pics we followed some minutes after the four dogs.  Soon after the flagstones suddenly disappeared under some black ooze.  So we had carefully to leap over some wet bog off to the right before we could rejoin the safety of the path.  The way to Cairn Hill was easy as there is a barely perceptible rise to it.  There, standing on the top, is a finger post showing routes north along the Pennine Way, to The Cheviot and east the way we would go.  By now the clouds had lifted considerably and had started to break.  We could see easily north west into the flatter lands on the Scottish side of the border as well as south west along the Cheviot hills.  Out to the east, the sea was grey.

Hedgehope Hill on the other side of the Harthope Valley had looked shapely throughout our round to date.  We had considered adding it to the day’s walk but were put off by reports of peat hags and we were also pressed a bit for time.  So at the dip between Cairn Hill and the rise to Coombe Fell we followed yet another finger sign down Harthope Valley, though not before stripping off a layer or two now we were out of the wind.

It felt quite a long way down the valley.  We had to cross the stream numerous times as the path switched banks.  The plod was pleasantly broken by the sight of Harthope Linn, a narrowing of the passage of the stream with a small waterfall and a rocky pool beneath.  Here the local couple had been indulging in a spot of paddling having taken off boots, socks and trousers.  We gave them a cheery wave and carried on.

Eventually, at Langleeford Hope, a grassy vehicular track appeared shortly followed by a metalled one.  It was then a quick march back to the car and our return home.

The Border hills have been much neglected by me.  That will need to be rectified – well at least in the right weather.  They can be grassy, boggy, wet lumps but the hills do convey a sense of space and, like the hills in the northern part of the Yorkshire Dales, are slightly less frequented than elsewhere.

Here are some photos from the day. 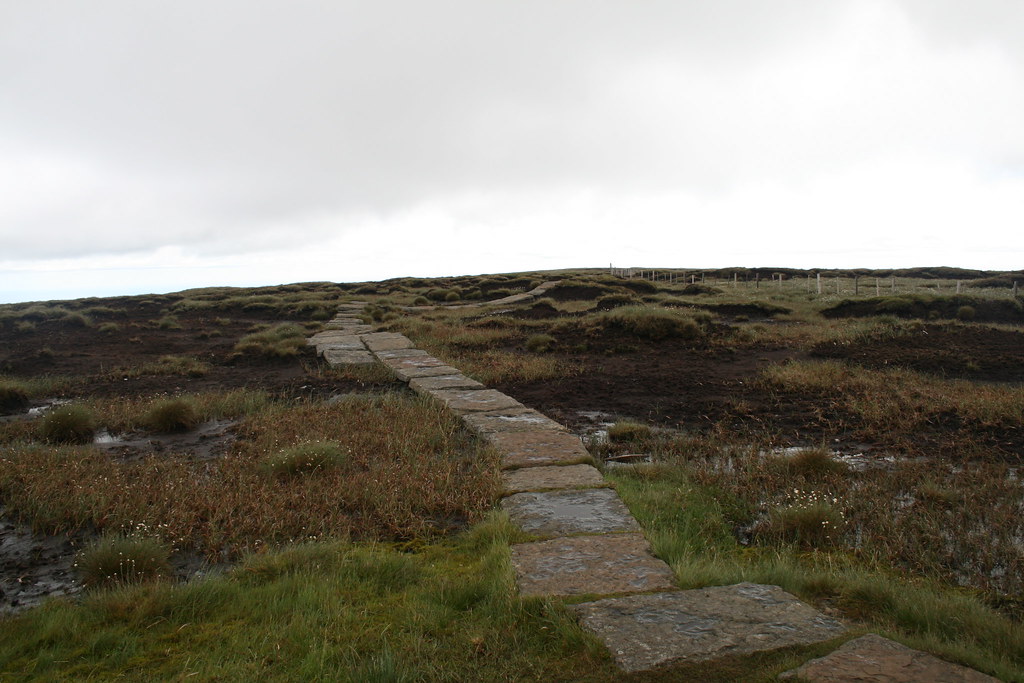 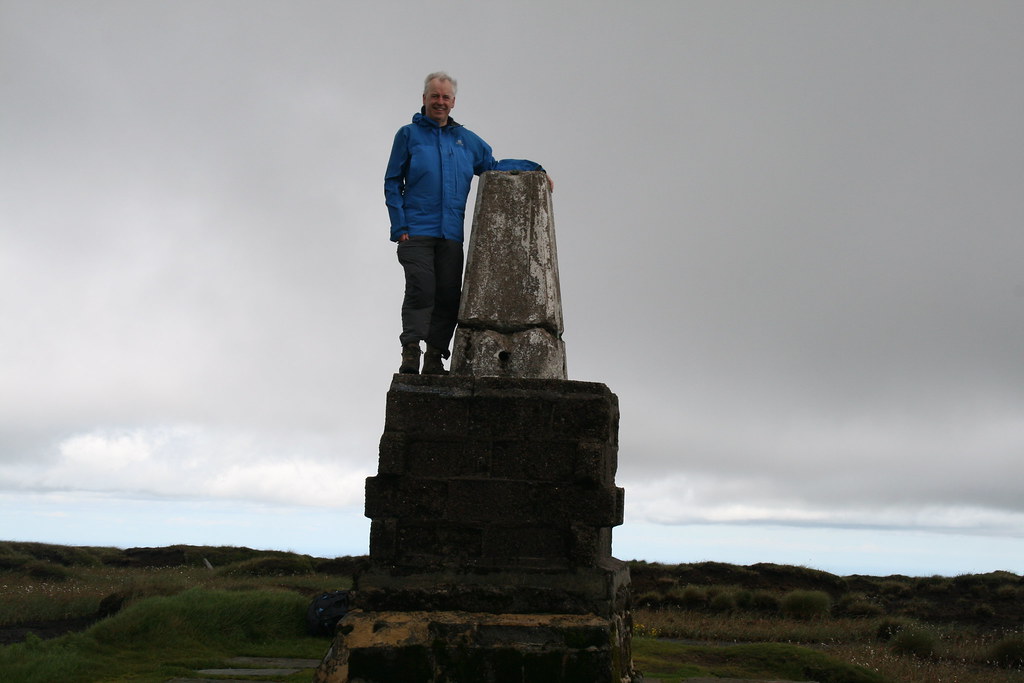 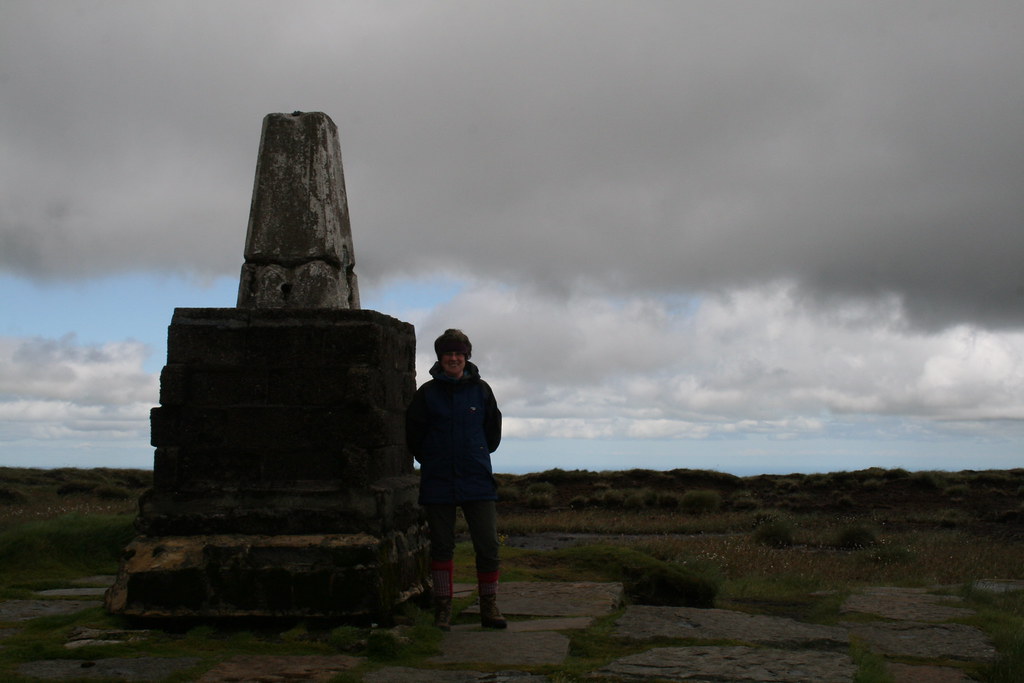 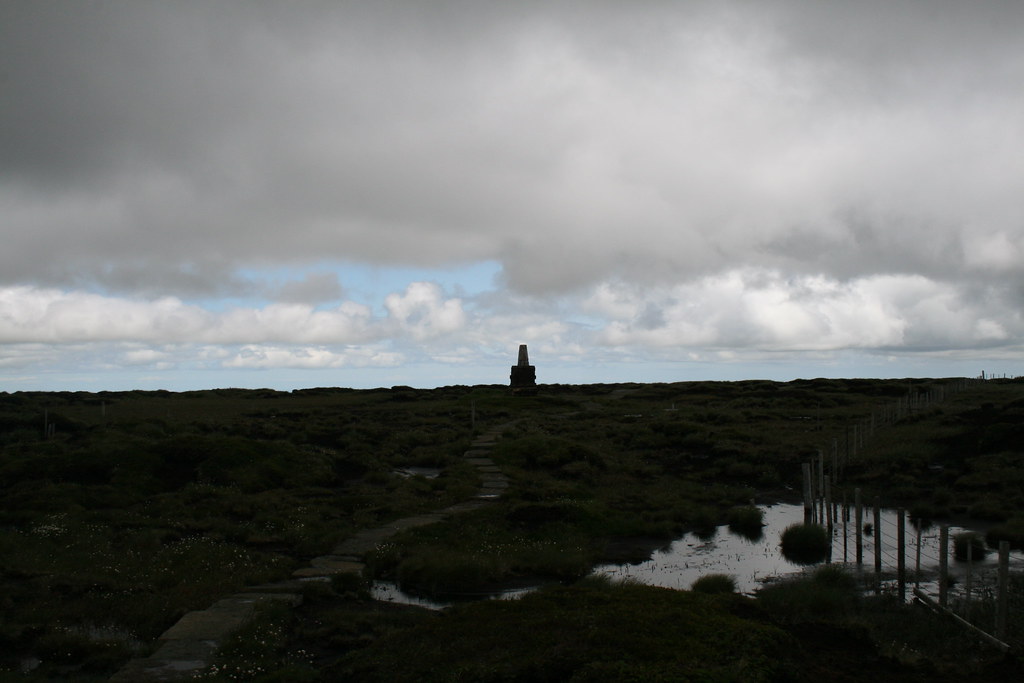 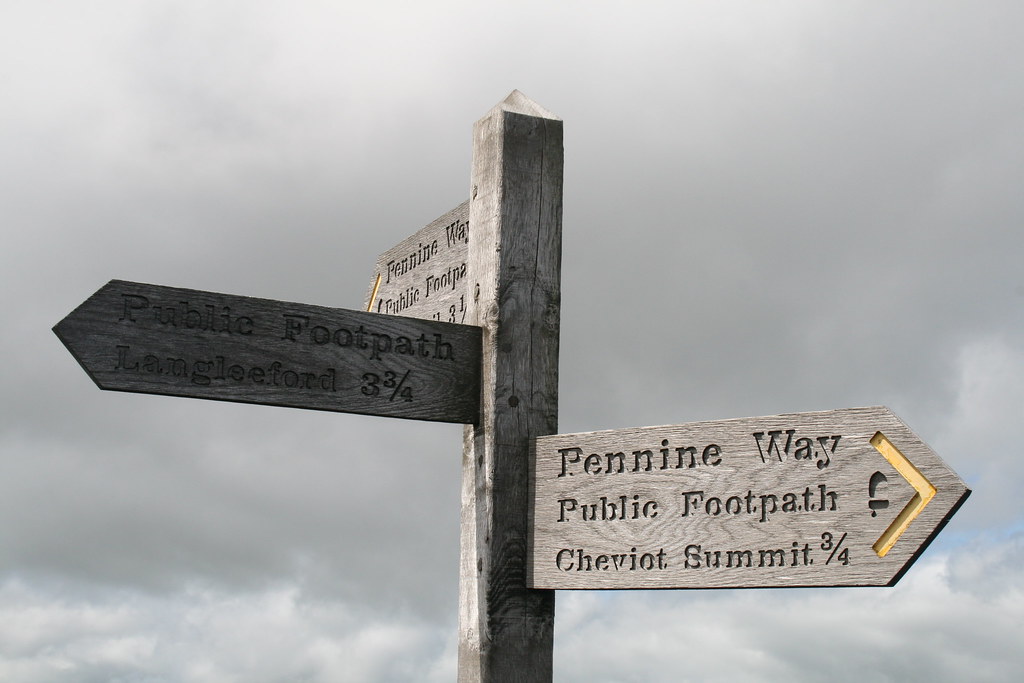 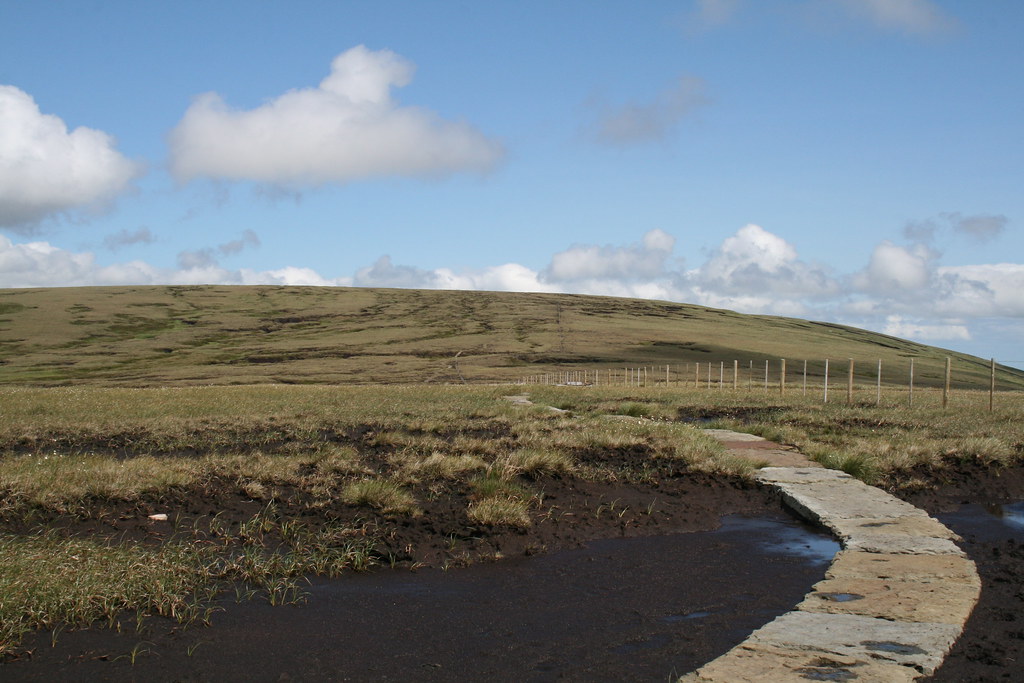 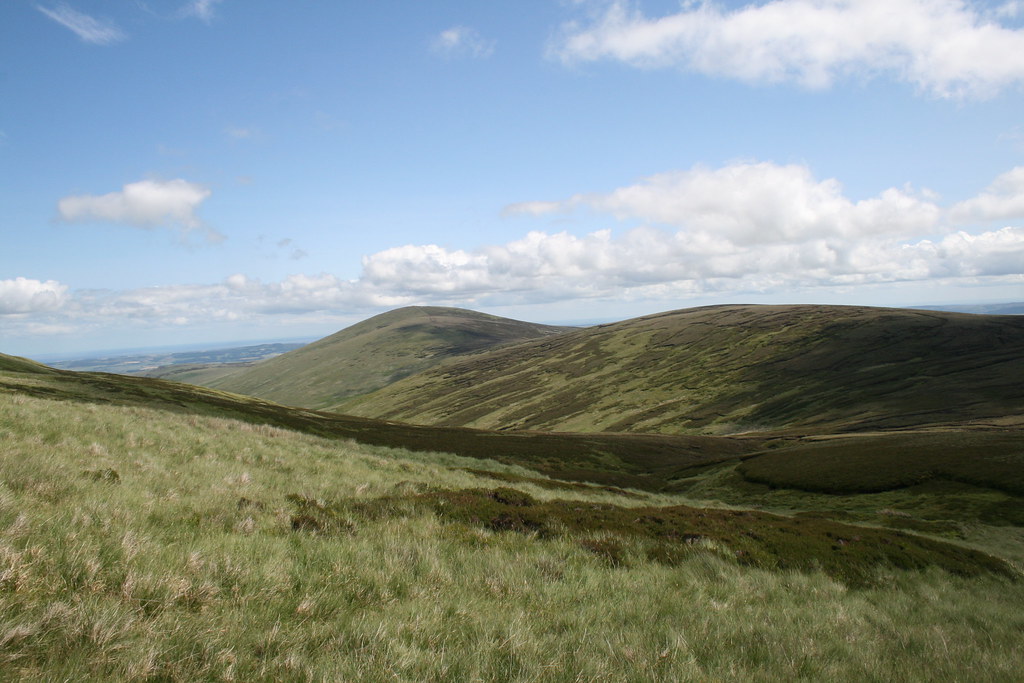