A pleasant evening after doing Creag Mac Ranaich and Meall an t-Seallaidh the day before (21st March) involving food, wine and late evening craic meant that ambitions for the following day were not challenging.  The weather forecast was not as good as the day before’s either.

Benvane is a mountain that is seen far and wide with its higher neighbour Ben Ledi from the lowlands to the south.  It rises between Loch Lubnaig to the east (from where there are also routes up) and Loch Katrine to the south west.  Being isolated and with a degree of prominence there are good views in all directions.  Our chosen route was from the north at Ballimore Farm which lies at the end of a single tack dead end road leading south from Balquidder.

Balquidder was centre of Christianity in the 8th century.  St Angus preached here and there is now an attractive church with the remains of an earlier medieval one.  The grave of Rob Roy MacGregor is in the churchyard with those of his wife and two sons.

Ballimore Farm is in Glen Buckie, a southerly branch off the main Glen, and was the location of one of the last events of the 1745 Jacobite Rising when Cameron of Locheil tried to raise support for further action against George II.  He was caught and executed for his troubles.

Well we did not start our day until 12.45pm!  There was one other car parked at the farm and we met its owner within 5 minutes after we set off, he having already made the ascent. 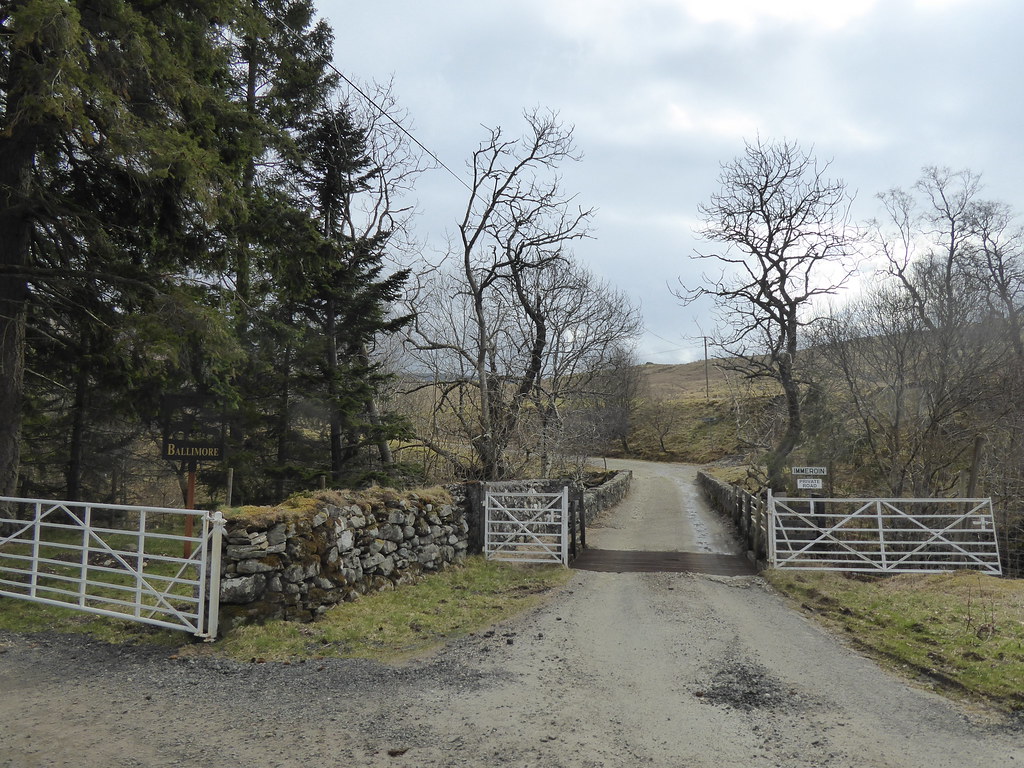 After crossing a couple of fields on the right of way to Brig O’Turk a gate is climbed and a turn left up the hillside is made.  There are traces of a path.  After 40 minutes it was time for lunch!  We had a view back down into Glen Buckie with a backdrop of the hills we had done the previous day. 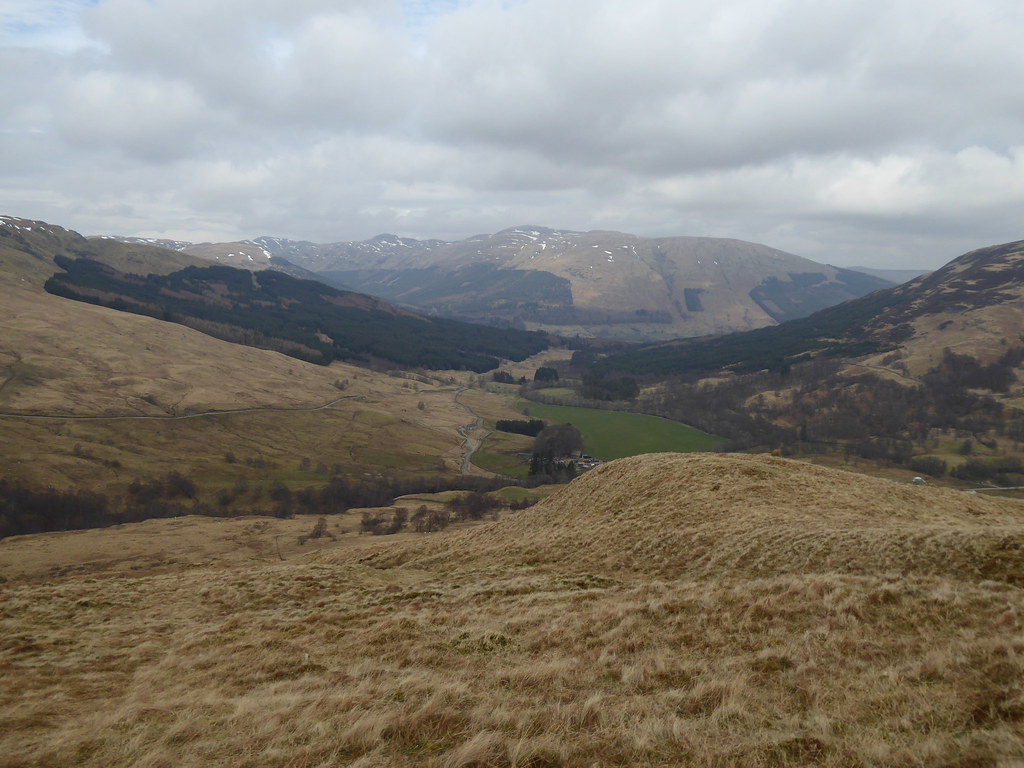 After weaving a way through some grassy bluffs the path became stronger along the broad grassy ridge.  The entire route was remarkably dry and the path easy to follow. Benvane looked worryingly distant across the moors but in fact reaching the foot of the final rise did not take too long. 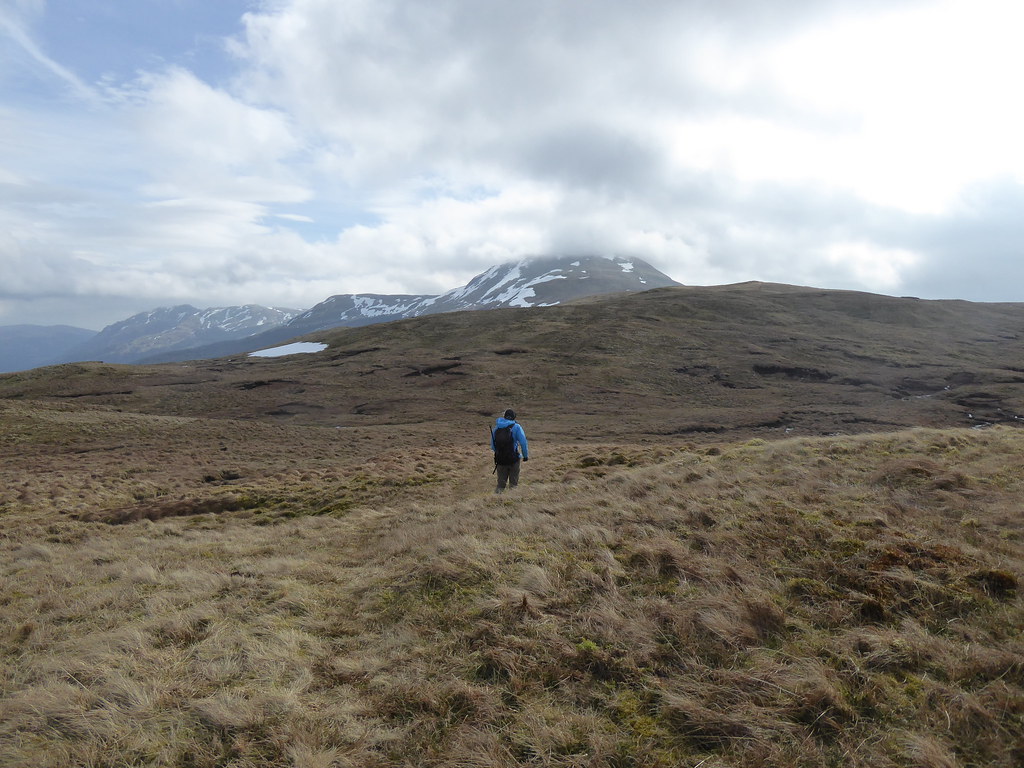 Cloud covered the top but the weather looked as though it would lift the cloud base.  Some higher hills to the east were clear.  We stopped at the foot of the rise for more food. My three months away from the hill was taking its toll but the energy levels were good for the final climb. We were passed by a chap and his brown lab on the final rise.

The cloud lifted for the summit but there was a stiff cool wind. The clarity of the atmosphere was far less good than the day before. But we could see Ben More and Stob Binnein, our Corbetts of the day before and Ben Vorlich and Stuc a’Chroin. Everything in the northern arc was fairly murky. 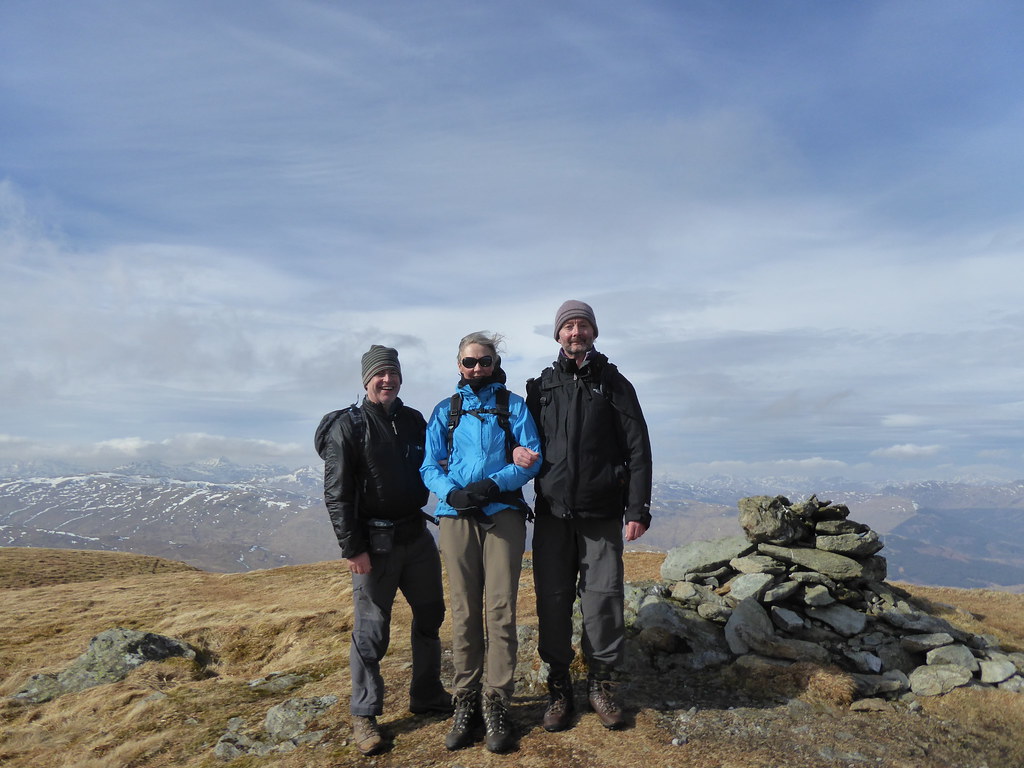 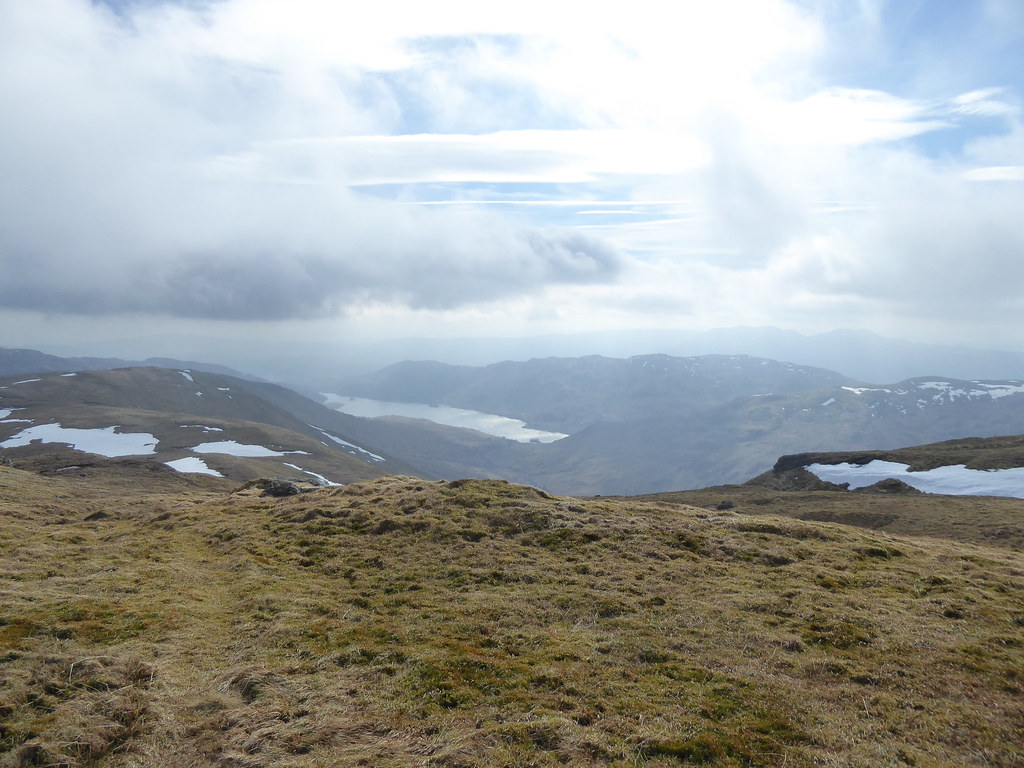 Towards Ben More and Stob Binnein 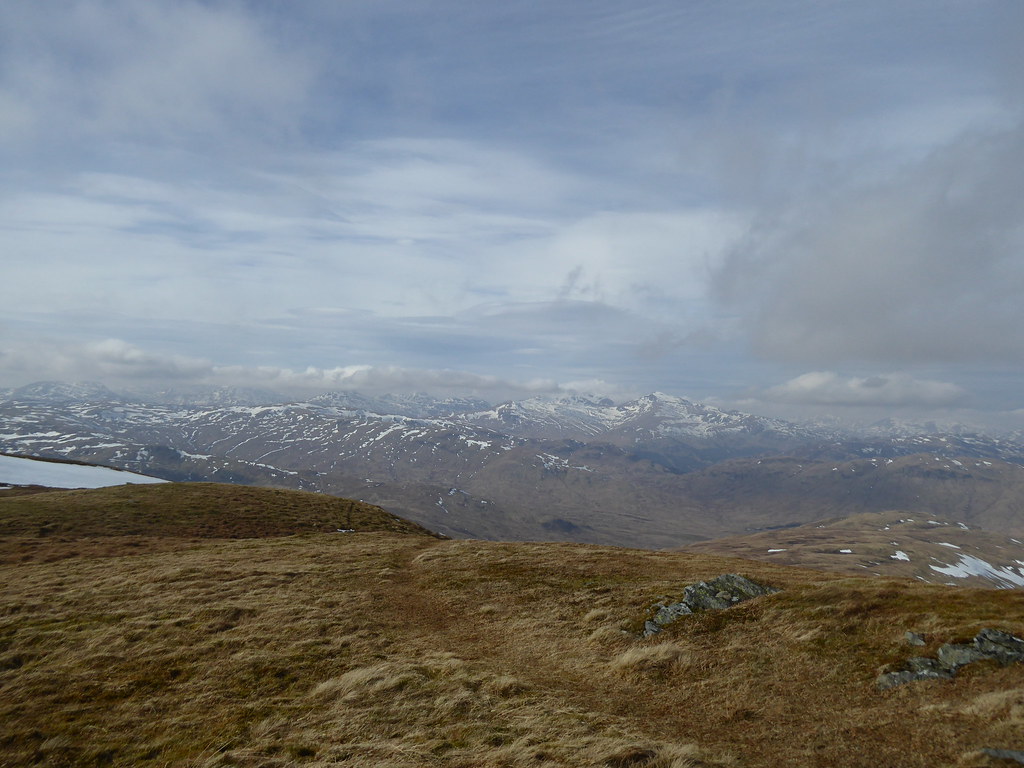 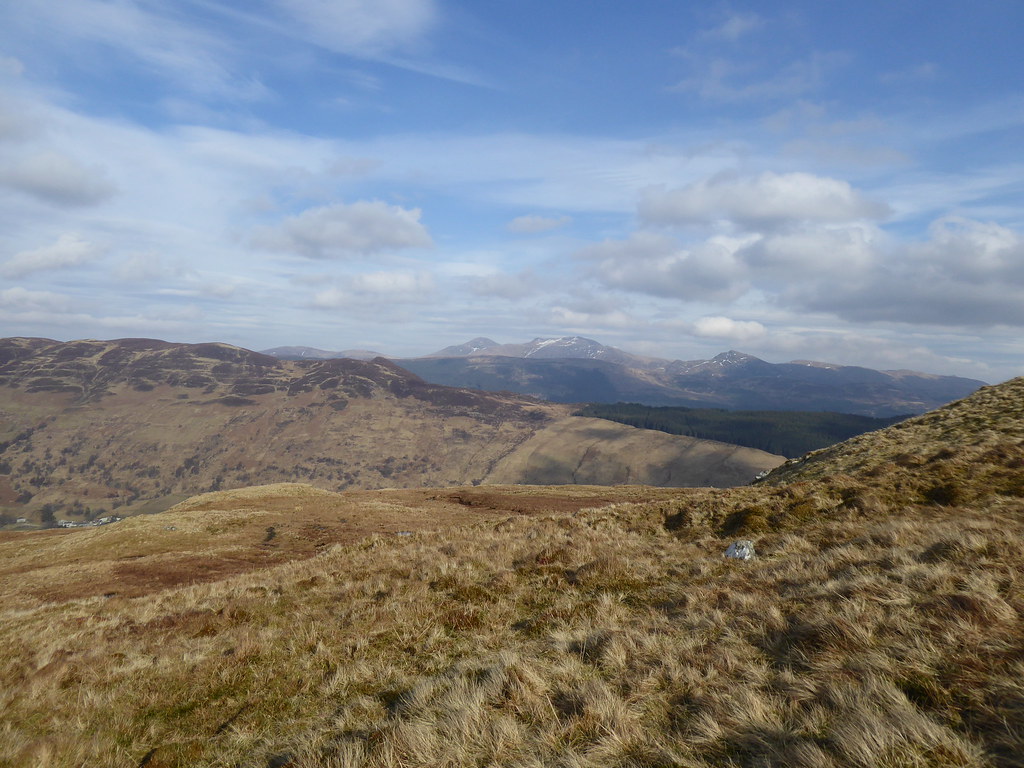 Back down in just over an hour including another food stop!!!

Each year for many a year a group of four of us have had our winter meet somewhere in the Highlands of Scotland.  Normally this is January or February.  Last year for the first time in many years commitments prevented us from gathering.  This year the meet was delayed until the end of March and Sue was not able to come.

So it was on 20th March I got together with Cozi and John at our self-catering accommodation in Crianlarich.  Despite my best efforts to arrive earlier, traffic held me up and I did not arrive until after 7pm.  John was even later and it was 9pm before he made it.  By then Cozi and I had decided what we would be doing the next day!

Being so late in the season we were not going to have so much snow to play in.  But there were still large patches above 750m.  So we might get some fun!

As ever we did not make a particularly early start the following day.  We arrived at Ledcharrie a little after 10.15am, but the daylight hours are plenty at this time of the year.  There is plenty of parking on the verge just to the west of the farmstead. 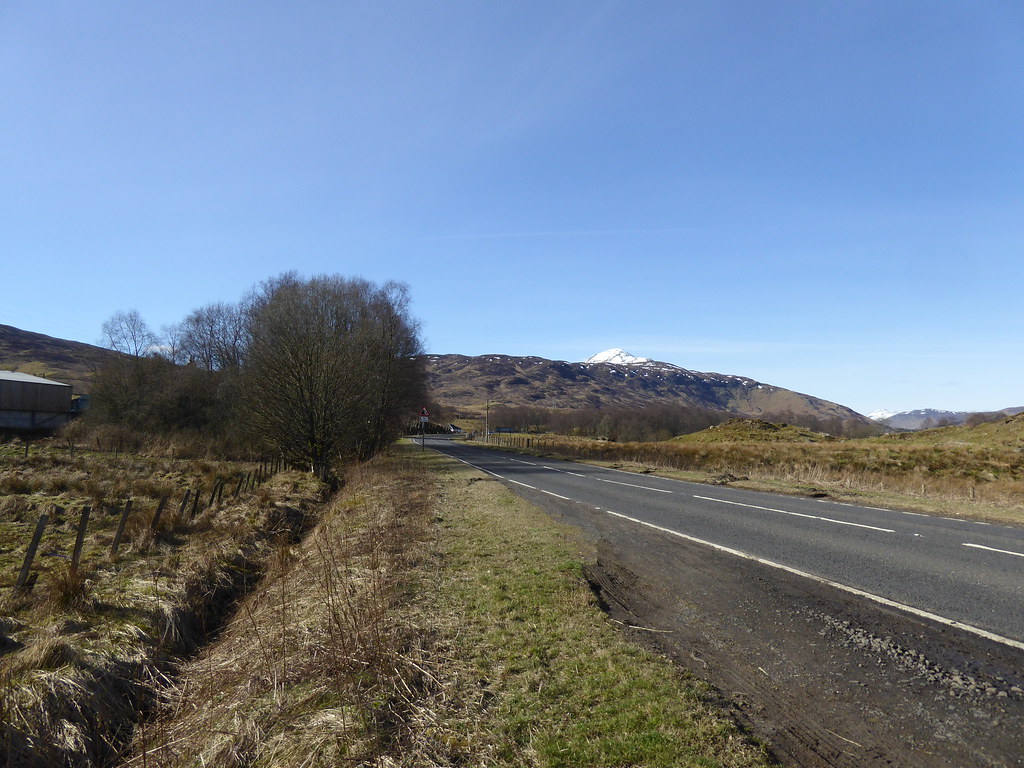 A public footpath runs through the farmyard and continues south to intersect the route of an old railway line.  We cut off some of the distance by heading east shortly after leaving the farmyard.  It was OK though there was a stream and associated bogginess to jump over.  But soon we were striding the gently rising but firm track continuing our eastward route.  At one point a fence had been constructed across the track but we were able to step over this.

Relics of the old line remain including sheep creeps under the embankment and bridges over. 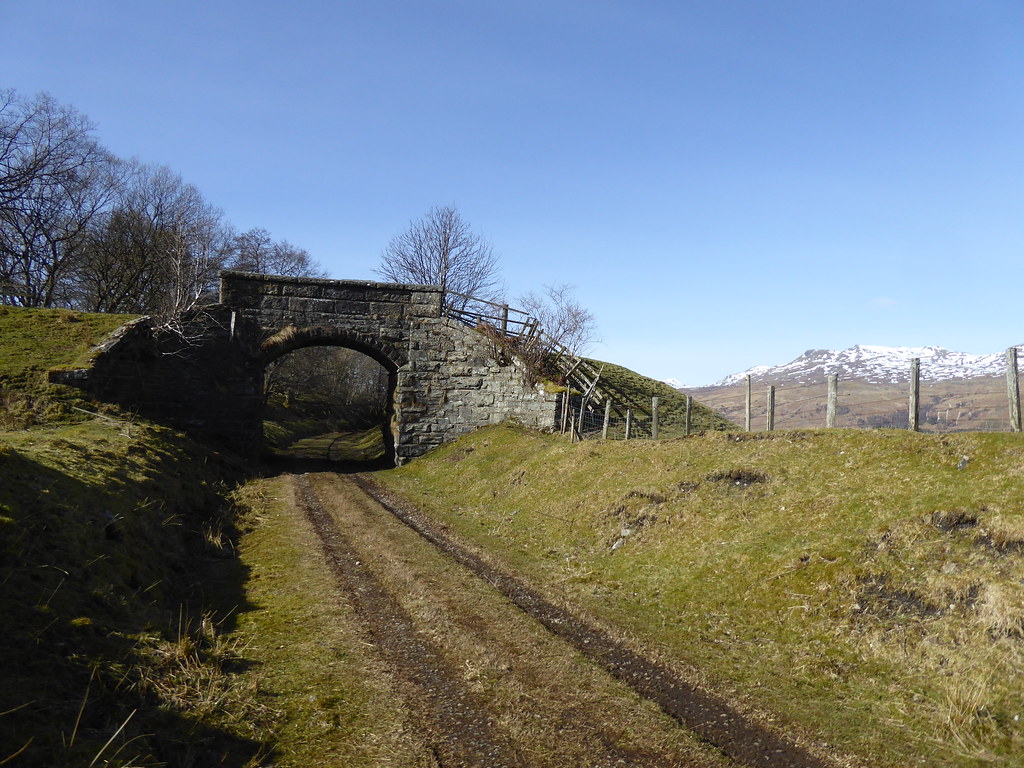 After about 1,500m the Ardchlyne Burn is crossed by a fairly substantial bridge and almost immediately after that there is a right hand turn into the woodland along a vehicle track that does not appear to have been used for years.  Although close to the edge of the wood, it was quite dark and in places branches sagged over the way and we had to duck under them or sweep them away with our arms.  This section did not take long and we soon emerged back out into the brightness. 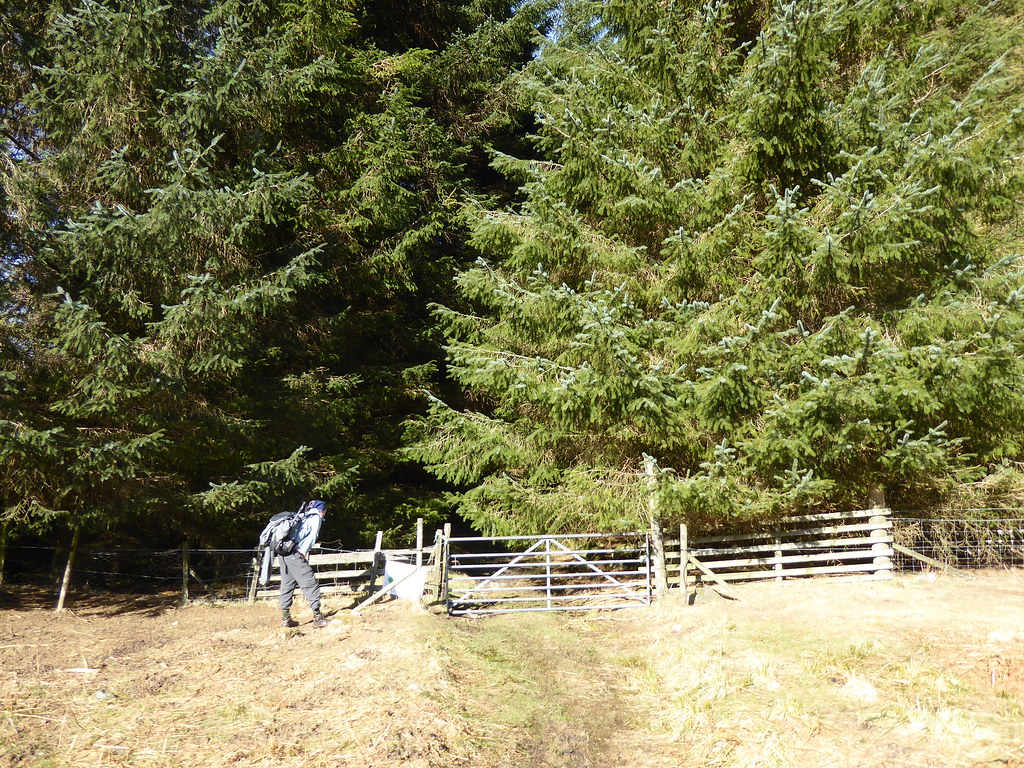 Here we removed layers and had a quick snack.  The day was gorgeous.  The burn sparkled in the sun to our right and slipped over small waterfalls. 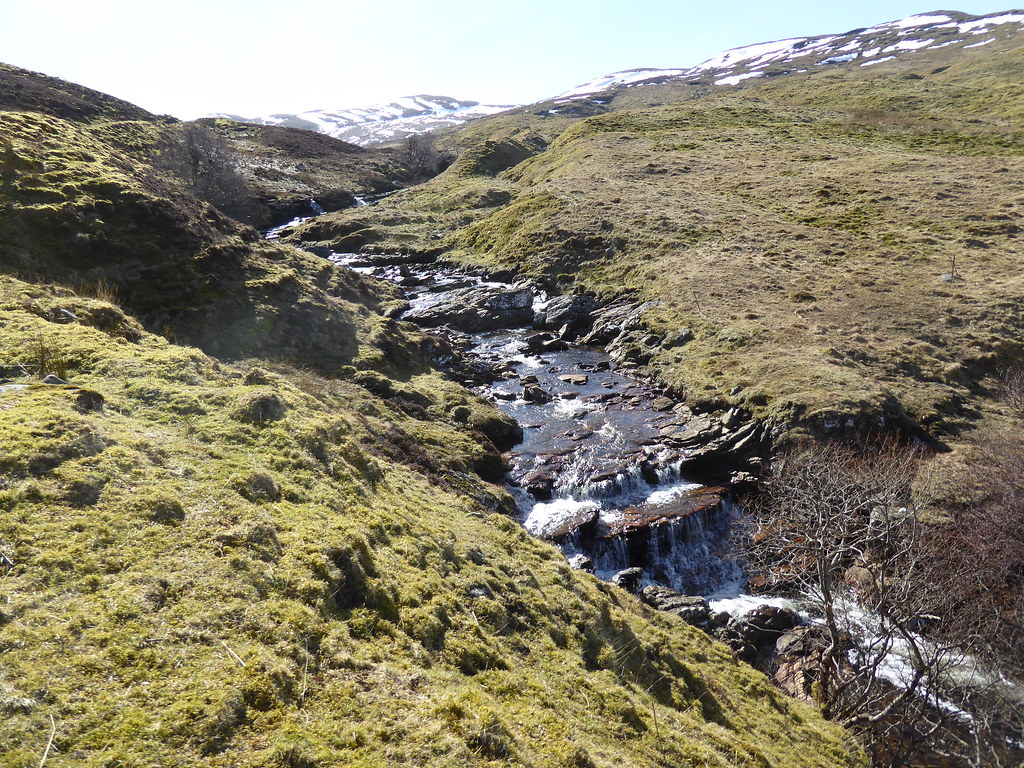 The track was quite dry but now rose a little more steeply for almost a further couple of kilometres.  We would tackle Creag Mac Ranaich first.  We broke away from the track just before the 450m contour line as shown on the map and followed the course of the stream to the side of the incipient crags.  This brought about 300m of stiff climbing before the gradient eased a bit.  Here we found a large patch of firm snow that made the going easier. 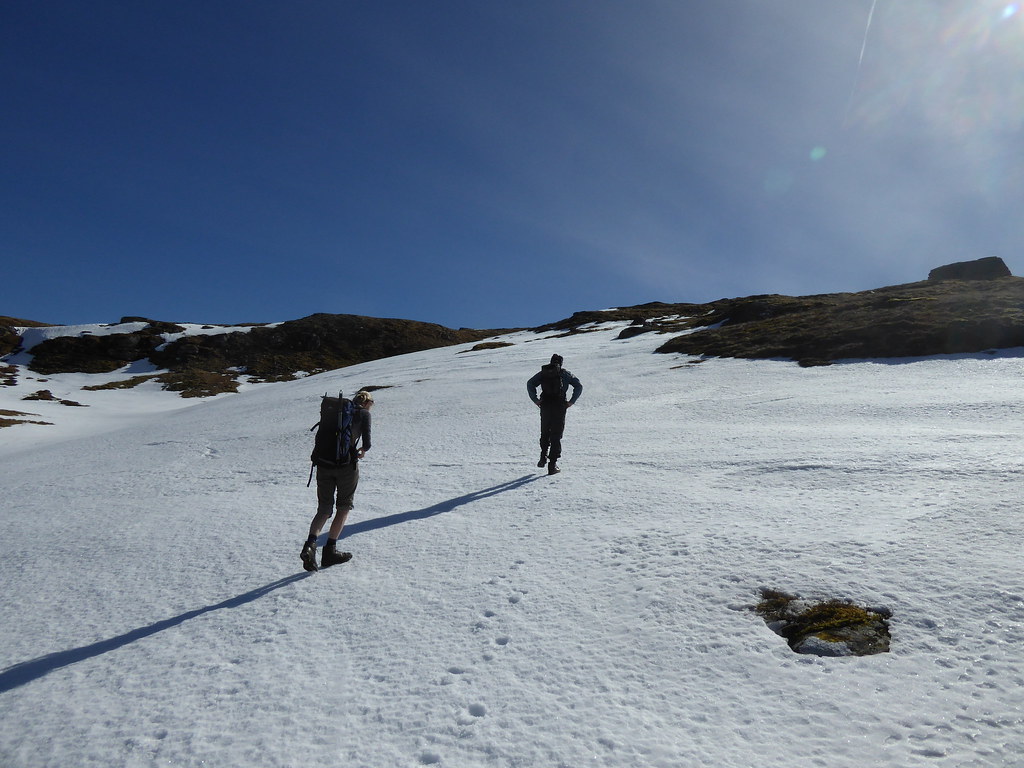 From there it was a straightforward 40m up to a cairn a little short of and below the 809m summit cairn.  Cozi decreed it was time for lunch.  Well it was 1pm so who were we to disagree.  We sat down in the sun.  The air was chilled but there was hardly a breath of wind so it was really rather pleasant.

The arc took in Ben Lomond, Ben More and Stob Binnein, Ben Lui, Beinn Challum, Meall Glas, Sgiath Chuil, Meall Ghaordaidh, The Tarmachans, the Lawers Group and distant hills further to the east.  Killin and the western end of Loch Tay were spread out below.  Above only a little thin high cloud spoiled the blue of the sky.  Voices drifted over from a couple who were sitting at the summit proper as we had our leisurely lunch.

I packed up and walked to other couple to disturb their peace and quiet.  They had taken the route up from Lochearnhead and were debating whether or not to tackle Meall an t-Seallaidh, as was I.  Cozi and then John joined me. 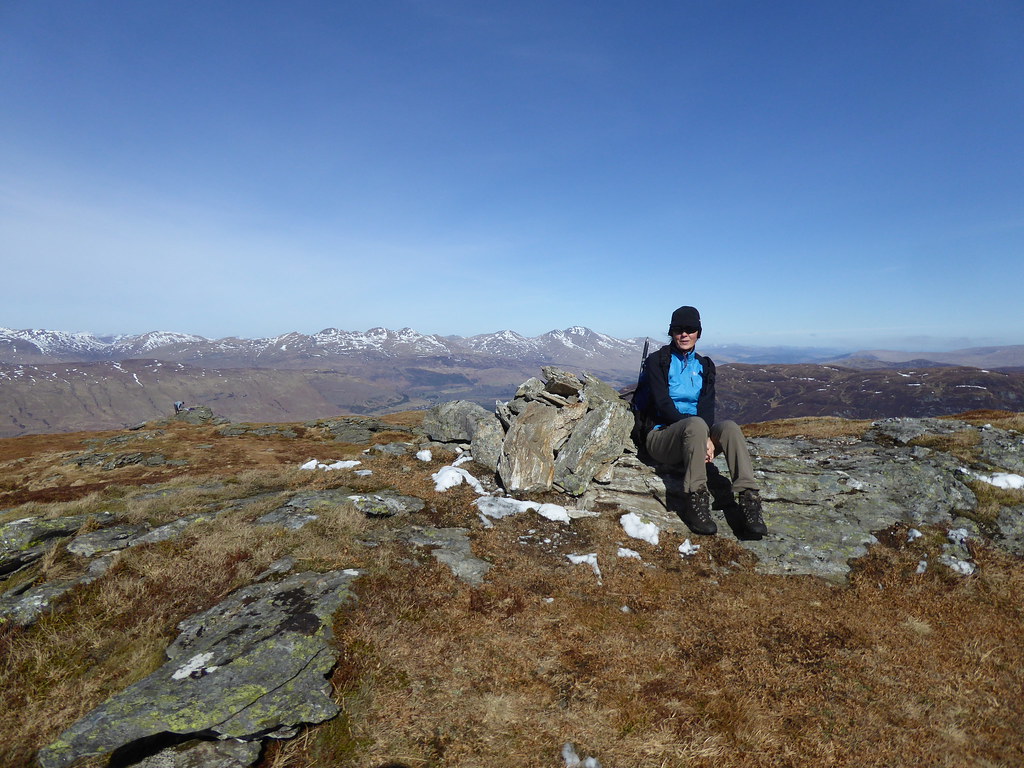 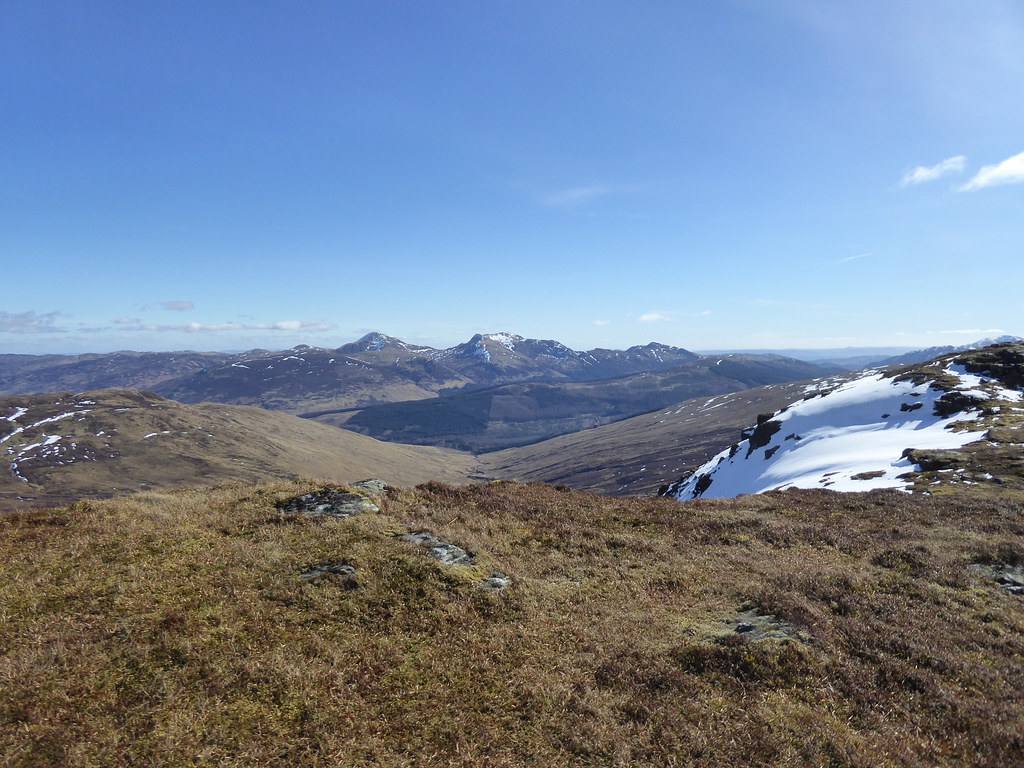 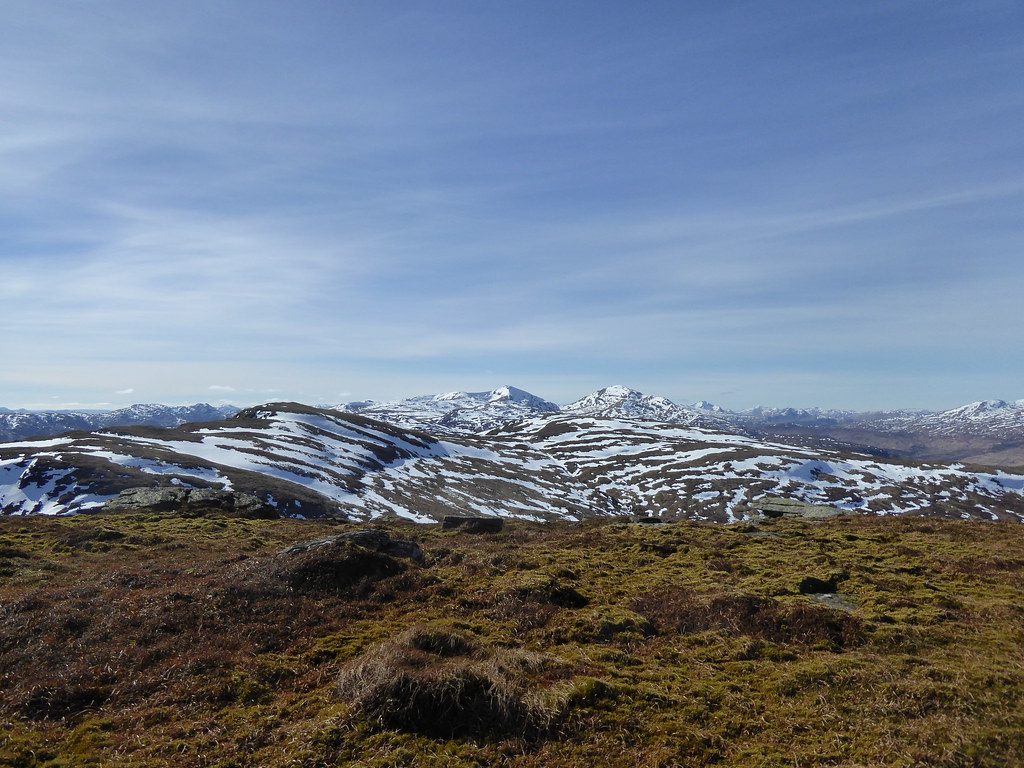 Ben Vorlich and Stuc a’Chroin now came into view as did Creag Mac Ranaich’s south top and Meall an t-Seallaidh. 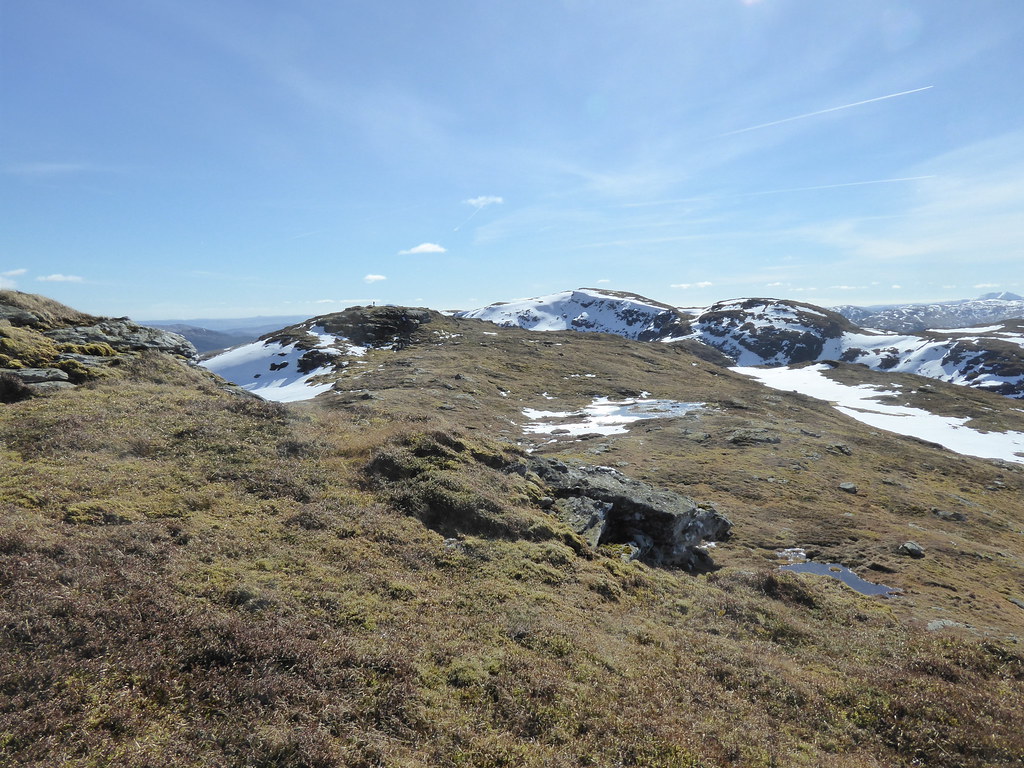 We strolled over the south top and then made a bee line for the col between the two Corbetts.  Any descent off the west side of Creag Mac Ranaich is going to be steep and caution needs to be taken amongst the broken crags.  But 40 minutes saw us down to the track that runs over the col. 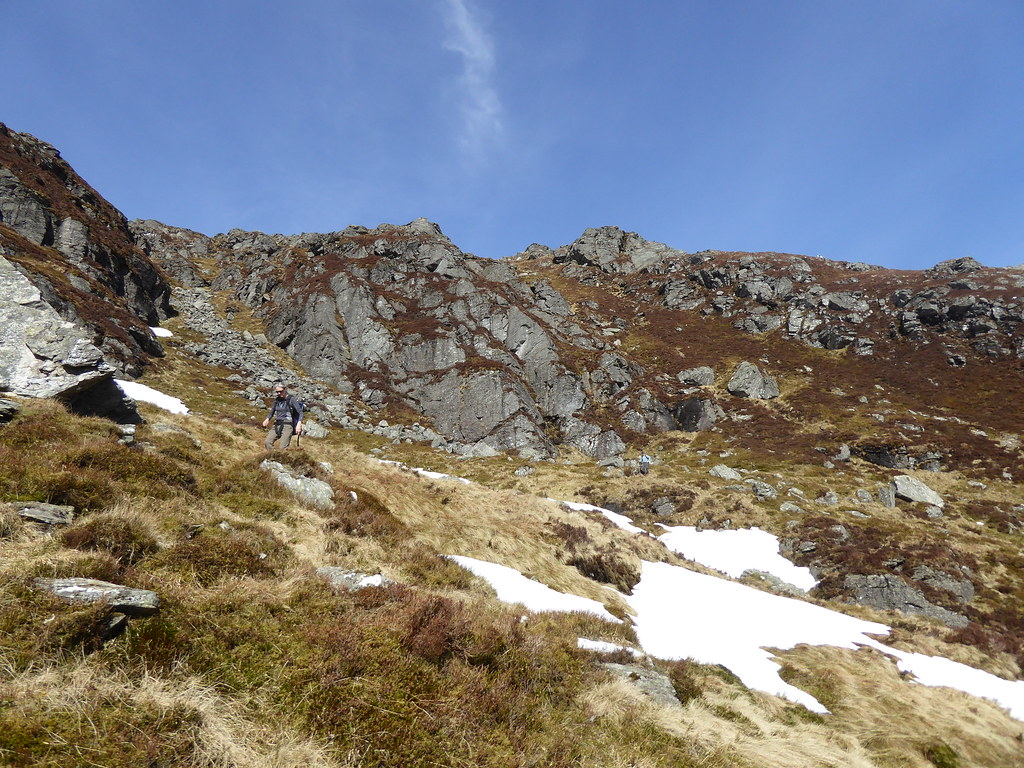 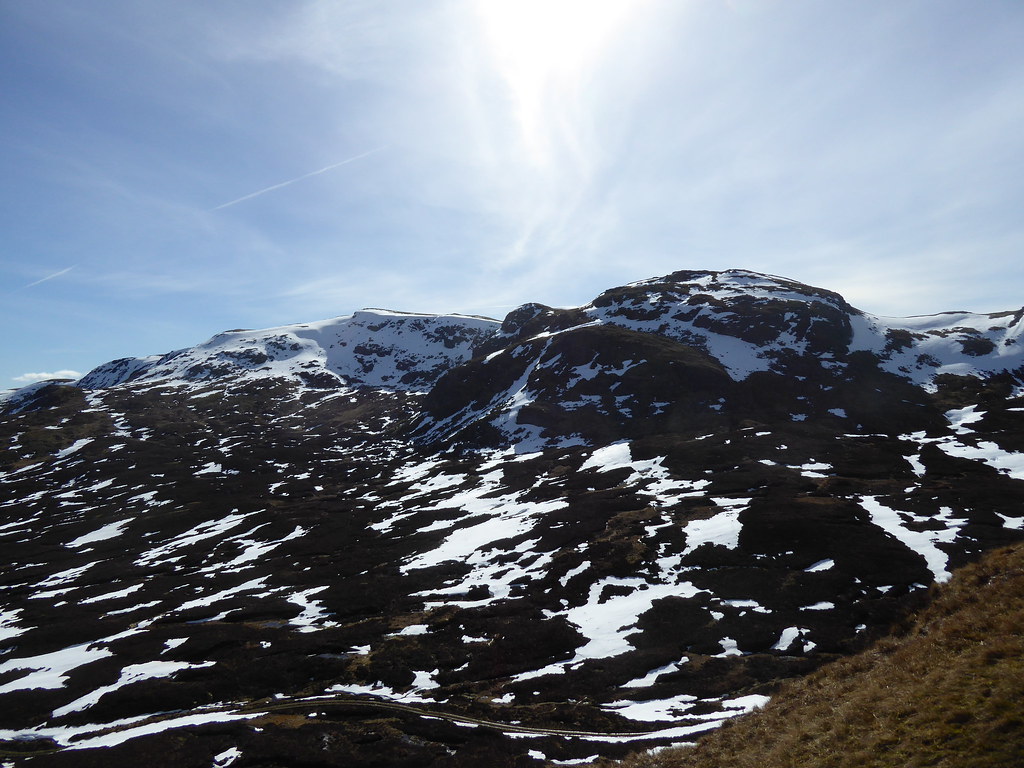 The direct route to Meall an t-Seallaidh didn’t look great with large patches of snow in the shade.  But Cozi fancied a bit of sport so she went that way.  John and I trended to the south over the rough ground to pick up a ridge by spot height 695m.  My idea of avoiding the heather and bog by following some large snow patches was soon ditched after my left leg disappeared up to my crotch and it took John and I a couple of minutes to dig me out as the leg was not for moving!

At the foot of the ridge John and I stopped for a quick snack.  The ridge above was covered in snow.  I lent John my ice axe for surety and he led the way kicking steps in the 100m of ascent as I followed.  The snow was great, firm enough for the steps and not soft enough for the steps to collapse.  Cozi had found this too and her direct route meant that she was at the top 15 minutes before us. 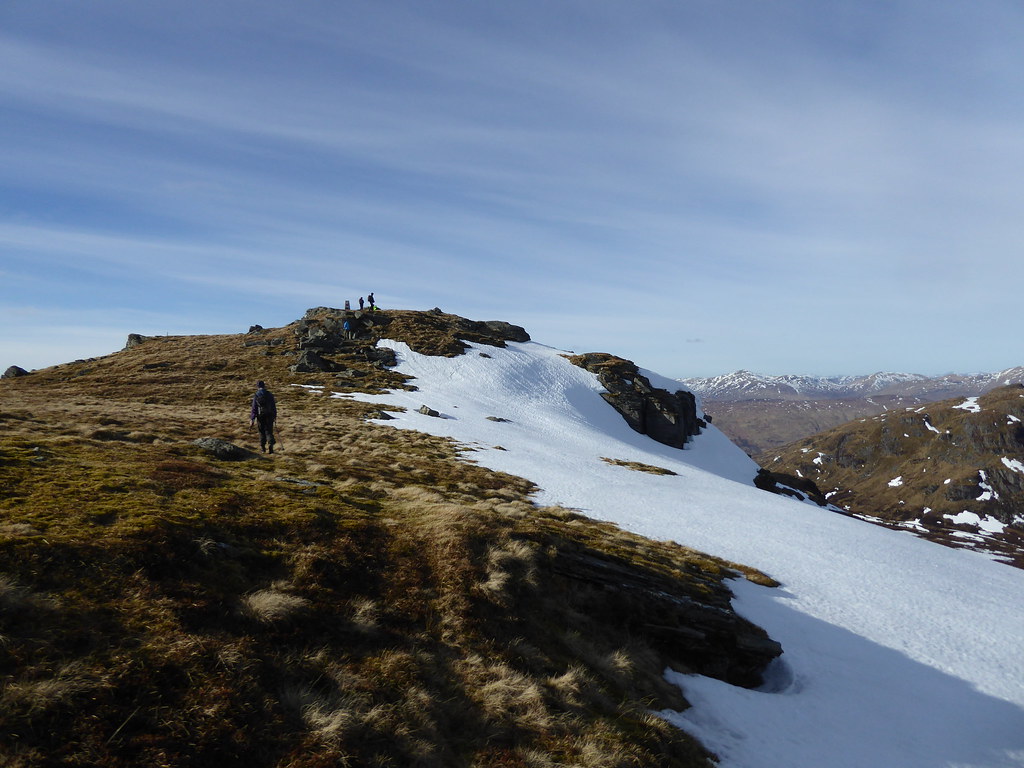 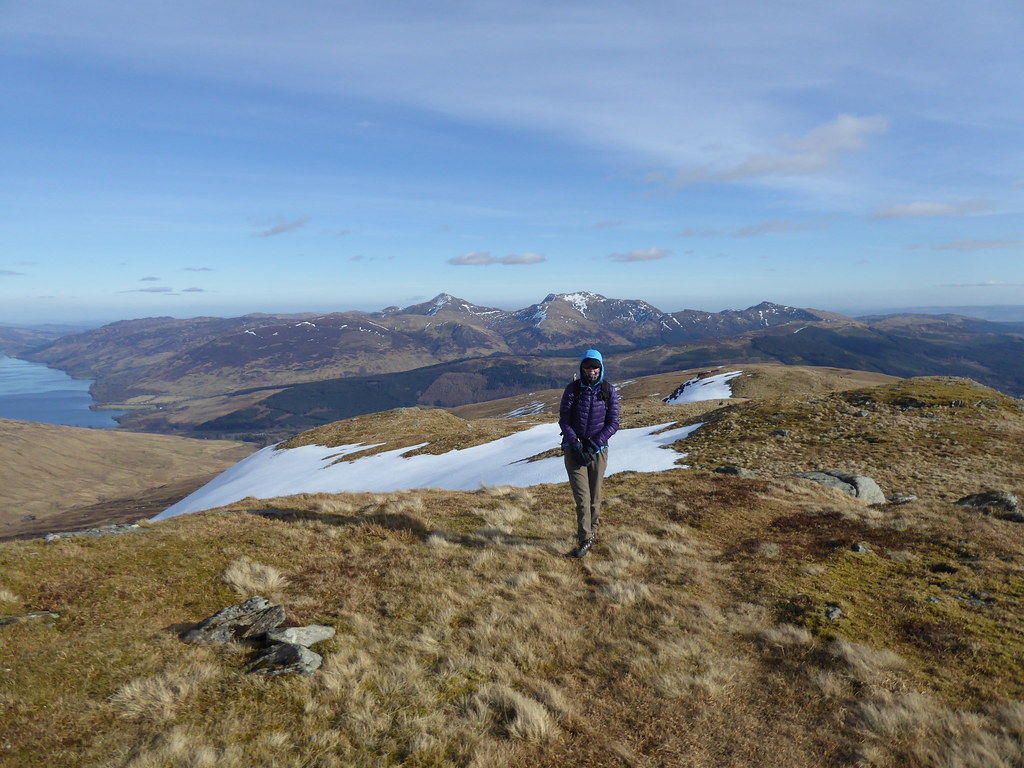 This summit was busier with the couple we had met earlier on Creag Mac Ranaich plus a few others.  By now the wind had picked up a little, so we sheltered amongst some rocks just below the trig point and cairn to discuss the return route and for some more food.

The views here were as good as from Creag Mac Ranaich.  Though we had lost Killin and Loch Tay we had gained Loch Earn.  Ben More and Stob Binnein still dominated the western view. 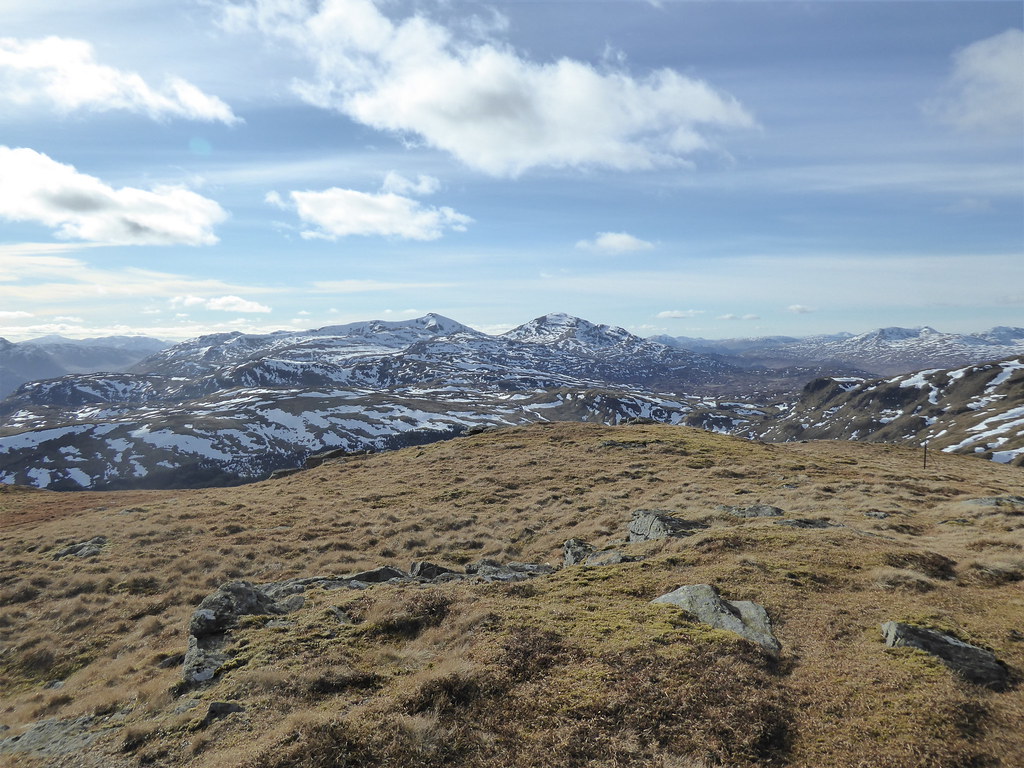 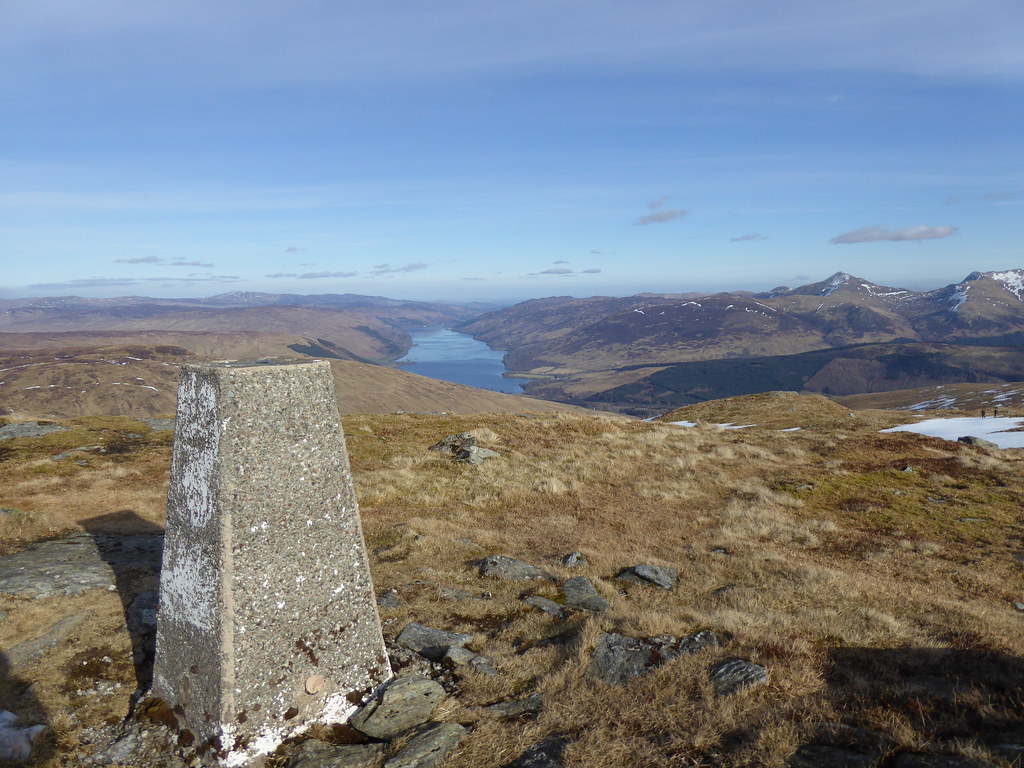 We had thought about heading for the glen to the west.  But the combination of rough ground and the snow did not appetise.  We also did not fancy climbing over Cam Chreag and Meall an Fhiodhain as, in my case, after a long lay off from the hills I was now becoming a little weary.  The way off from the col just before Cam Chreag did not look too bad.  The snow at the top of the slope back to the glen to the east was soft enough to run down.  But as it steepened it became harder.  Any danger of me slipping was soon avoided by my leg (right this time) puncturing the surface and plunging knee deep into it!  Having extricated myself we were quickly back down to the track.  A couple of cyclists were there, one of whom we had overtaken on our way off the last hill.

We had one last look back at our second hill. 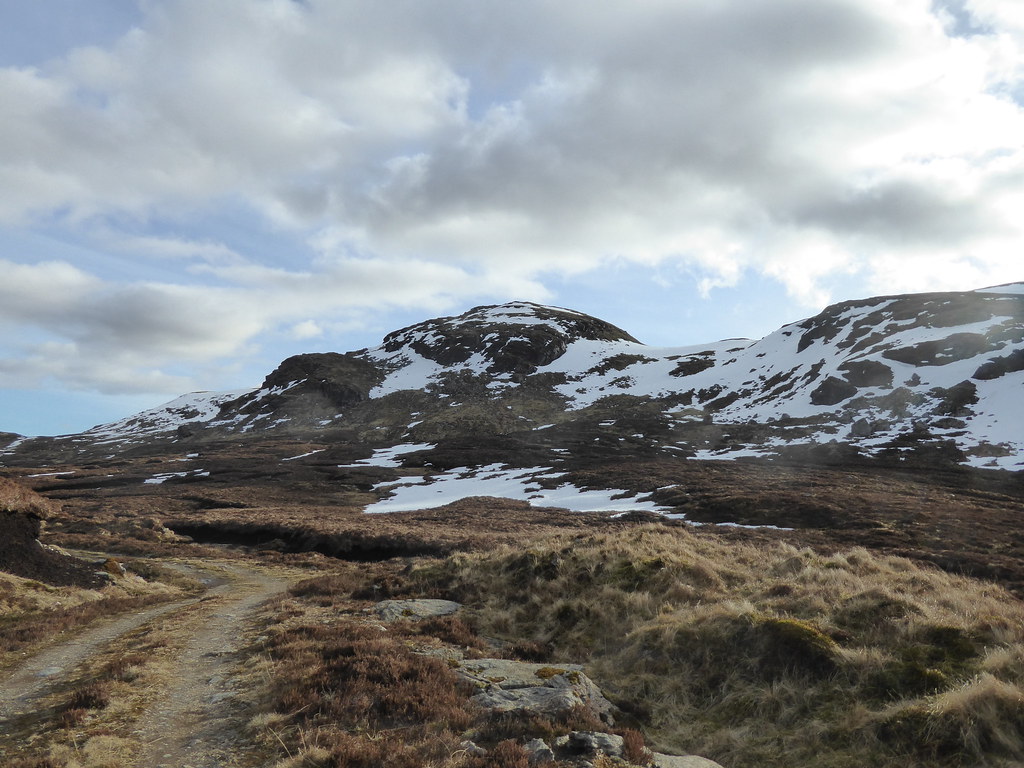 And returned the way we had come.

I am getting around to sorting out some of the videos taken on the Mexico/South America trip.  Here is one taken by me on the summit of Pico de Orizaba.  Sorry about the wind noise which drowns out a little of the commentary.

I hope you can get a feeling for the experience from this video – be it the stunning views, the breathlessness in my voice or the jaws of the crater.

Crikey!  I am glad that Derek and I did not find these on our ascent!