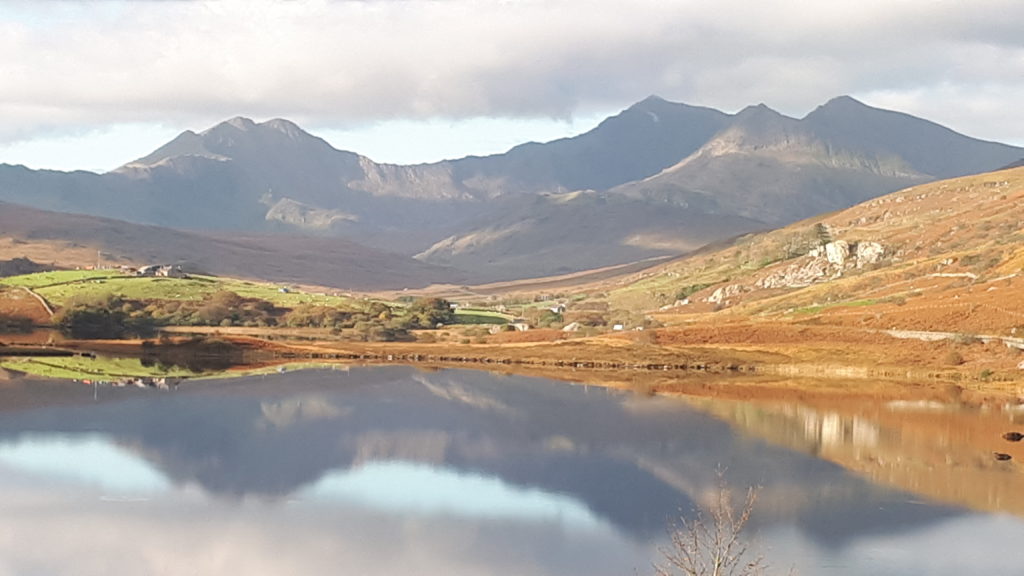 Of course, there is no volcanic activity in Britain at the moment. The last active volcanoes erupted about 60 million years ago.

60 million years gives a long period of time for other forces to exert their influence on the landscape and to erode features. Perhaps the greatest single example of this is the effect of the ice ages. Britain has had several over the last 500,000 years.

So it is hardly surprising that the island of Britain has nothing that looks obviously like a volcano, at least to the untrained eye. We are left with remnants.

The reason why we haven’t had any active volcanoes in Britain for about 60 million years is that we are now in a tectonically quiet part of the world. Most volcanoes occur near the edges of the Earth’s tectonic plates but Britain is now a long way from such geologically active areas.

So Britain is neither on the edge of a plate nor near a hotspot. The nearest plate boundary to the British Isles runs down the centre of the Atlantic, and Iceland (with its many volcanoes) lies on top of the boundary.

Here I am not identifying the seven highest volcanic summits in Britain (though the first one is the highest). The following are just a selection of both better and lesser known British mountains that are volcanoes and that I thought I would highlight.

The effect of erosion, whether this be wind, rain or ice, is such that the outer cover of our volcanoes has long since gone. In Britain you do not walk on volcanoes, you walk within them. This is the case with our highest mountain – Ben Nevis at 1345m.

Ben Nevis ended its active life in spectacular fashion. As a volcano it collapsed in on itself. We know this because near the summit light coloured granite that had formed several kilometres beneath the earth’s surface now lies right up against dark basaltic lavas that once spewed out at the surface.

This fact will pass by the thousands of people who make their way to the summit each year via the so-called Tourist Path. And most will also miss the grander side of the mountain – its North Face. Yes, at the summit you can look down the gulleys and ridges that form that face. But it is only from walking along the Allt a’Mhuillin or climbing Carn Mor Dearg that the true extent can be appreciated.

It is truly alpine in nature with world class winter snow and ice climbing. An approach via the Carn Mor Dearg arête provides one of the better approaches to the top. The story of my climb via this route is here.

In Wales, a ring of volcanoes once surrounded what is now the principality’s highest peak, Snowdon at 1085m. They were all part of an arc of islands that were active for the best part of 70m years. This land mass started its life 6,500 kilometres away in the southern hemisphere.

This volcano is around 450 million years old. The caldera is difficult to pinpoint, but the summit lies at its northern edge.

Today, the mountain is tamed by a mountain railway that takes you to the top where there is a cafe. Mining activity has somewhat despoiled the mountain. Routes radiate from the summit in all directions. Yet it is a shapely mountain with a sharp ridge of Crib Goch that forms the northern arm of the classic Snowdon horseshoe walk, the outline of which is seen to good effect in the photo above.

The highpoint of England is also a volcanic remnant. Scafell Pike is 978m high. Here is a view of it and its neighbour Scafell split by the notch of Mickledore seen over the fjord-like trench of Wastwater.

This view shows the effects of the last ice age on the volcanic landscape with Wastwater sitting in a ‘U’-shaped valley.

Scafell Pike forms part of a volcano that formed 400 million to 450 million years ago.

The north west part of the Ardnamurchan peninsula contains one of Britain’s largest volcanic structures. It is not particularly high, reaching 437m at Meall nan Con (Hill of the Dog).

Whilst its almost complete circular structure gives the impression of an ancient caldera, it is in fact a lopolith. This is an igneous intrusion that is lenticular in shape with a depressed central area. The feature has been left standing proud of the surrounding landscape with the remaining parts of the volcano having eroded away.

The Ardnamurchan volcano is in a remote area in British terms. It can only be reached by a long single track road. The peninsular is mainland Britain’s most westerly point.

On the Isle of Skye, an entire range of mountains, the Cuillins, is formed from what was once a magma chamber – a vast underground reservoir of lava.

The main Cuillin ridge of gabbro and basalt provides the most sustained, technical terrain in the British Isles. Sgurr Alasdair is its highest peak at 992m. It also includes the only Munro that requires a graded climb to reach its summit.

The volcanic activity that formed this range took place around 60 million years ago.

A blog of one of my trips to the Cuillin is here.

Britain used to be far more dramatic geologically and Glen Coe is evidence of just how extreme matters once were – because it’s the remains of a supervolcano.

Glencoe is the centre of some of the best climbing in Scotland with mountains such as Bidean nam Bian (1150m), the Buachailles and the Aonach Eagach ridge. It is also the location of the infamous 1692 massacre of members of the Clan MacDonald.

The last eruption of this supervolcano was around 420 million years ago. It is regarded as one of the best examples of subsidence calderas which leaves a cauldron-like hollow that forms following the evacuation of the magma chamber.

North Berwick Law is a volcanic plug – an object created from hardened magma in a volcanic vent – that rises from the surrounding landscape in dramatic fashion.

It overlooks the East Lothian town of North Berwick and stands at a diminutive 187m above sea level. The lowest of my British Volcanic Seven Summits.

The summit bears remnants of an Iron Age hill fort, and the ruins of later military buildings that were once used by lookouts in both the Napoleonic Wars, and in World War II.

So there you have it. Seven volcanoes that dot the British landscape. They are clearly not as grand as the Volcanic Seven Summits. But they all have their interesting facets.

I could have mentioned more, such as Arthur’s Seat and Castle Rock in Edinburgh, Rubers Law in the border lands between England and Scotland, Lindisfarne, the volcanic plugs upon which many British castles are located (Stirling, Bamburgh, Dunstanburgh etc) or Staffa (the location of Fingal’s Cave).