The weather forecast was not that promising but I had had this trip north planned for many weeks.  MWIS was promising strong winds and a slightly better than even chance of cloud free tops.  The previous few days had seen a fair amount of precipitation and that meant more snow on the highest tops.

I parked in the car park by the entrance drive up to the Inchnadamph Hotel.  Although it was a week leading up to a Bank Holiday the Hotel looked distinctly underpatronised.  This was in contrast to the Lodge which looked busy as I passed by on the track that leaves the main road just north of the bridge. 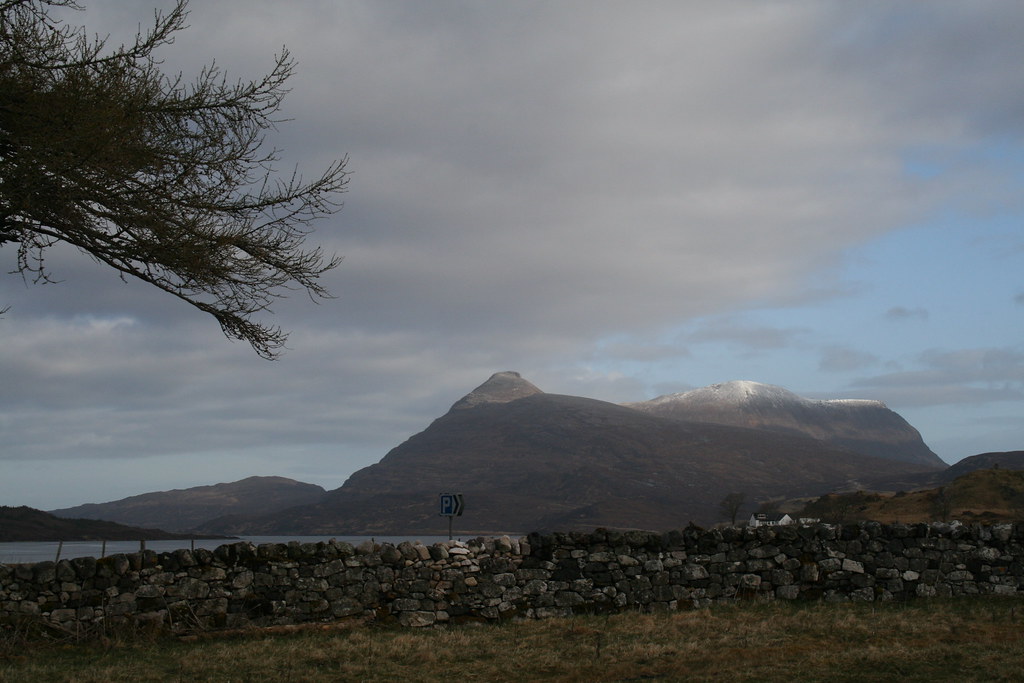 The summit of Conival looked clear but there was some cloud nearby.  The track leads easily through scattered houses and on over a ford and back to the River Traligill.  Just over one km further the holiday cottage of Glen Bain was passed and the track then becomes grassy.  It is easily followed adjacent to the river. 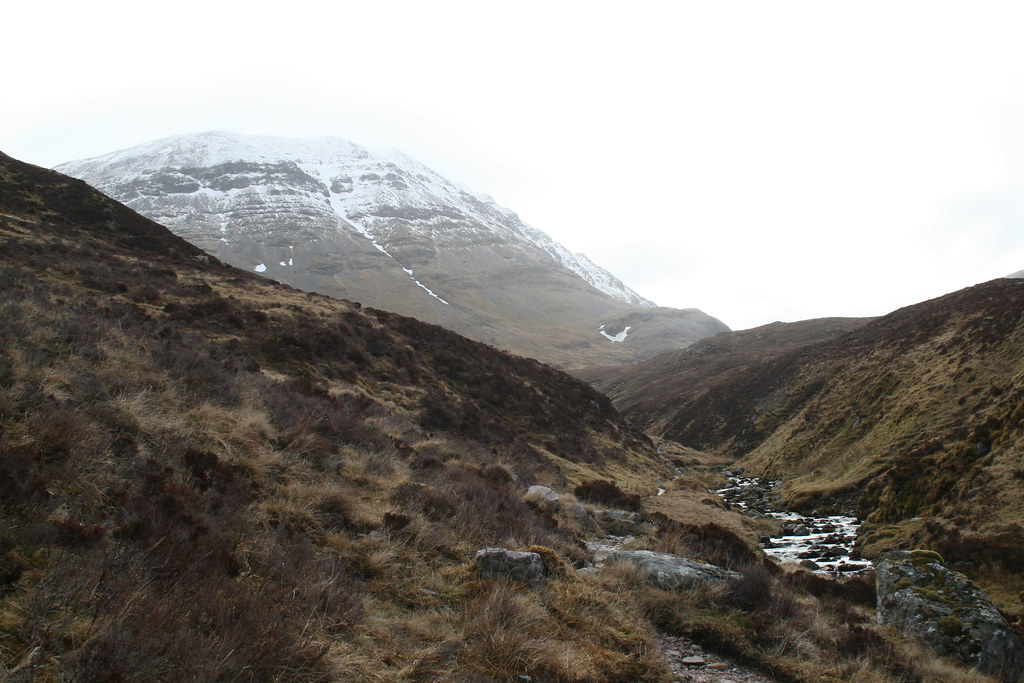 The WH route map shows a rising traverse up the lower slopes of Beinn an Furain but it was easy enough by the river.  As the river turns north east there was a short section of boggier ground, but this was soon passed and the path rose roughly for 300m to the lip of the upper coire and a small waterfall.  Here was the snow line. 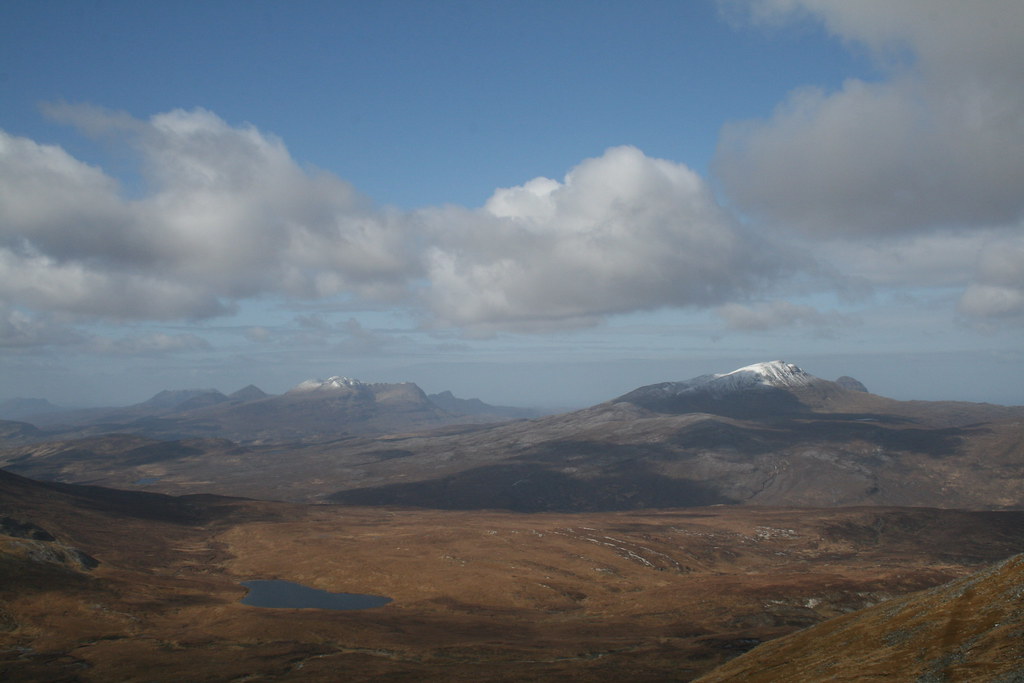 From here I trended slightly to the right towards the lowest point on the skyline ahead of me.  The snow was largely firm from the freeze/thaw cycles that had occurred.  At the bealach it was then a right turn in a southerly direction up the stony slopes.  I could (perhaps should) have put on crampons here but it was simple enough to avoid the snow ice by keeping to the rocky ground.  I was going well so the final 200m of ascent slipped quickly by and Ben More Assynt came into view.  The whole of this group remained gripped by full winter conditions – yet it was the end of April. 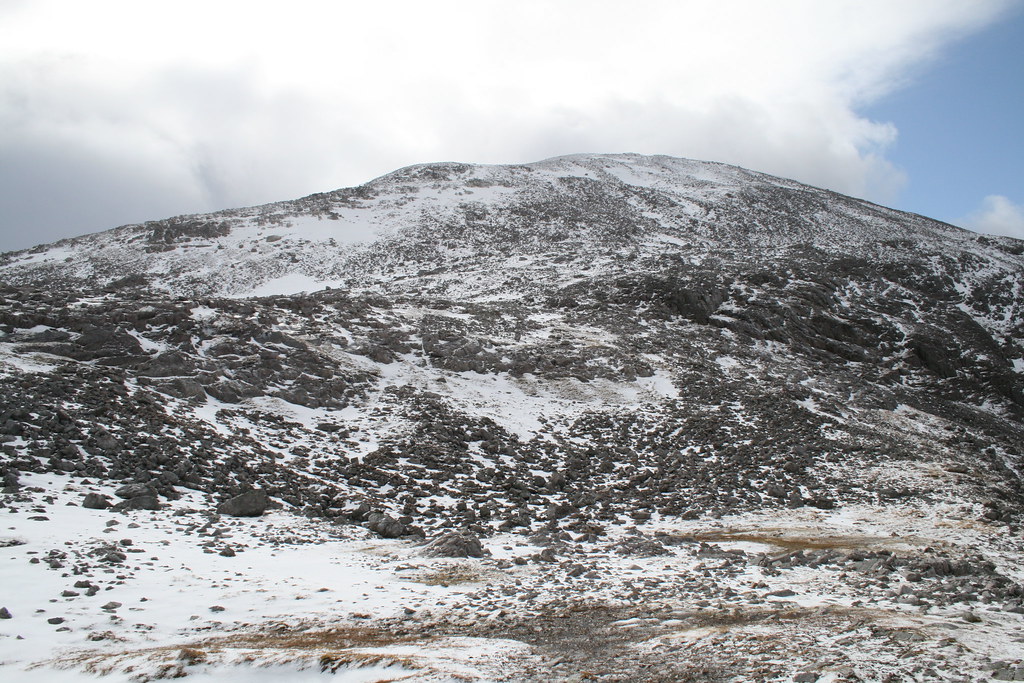 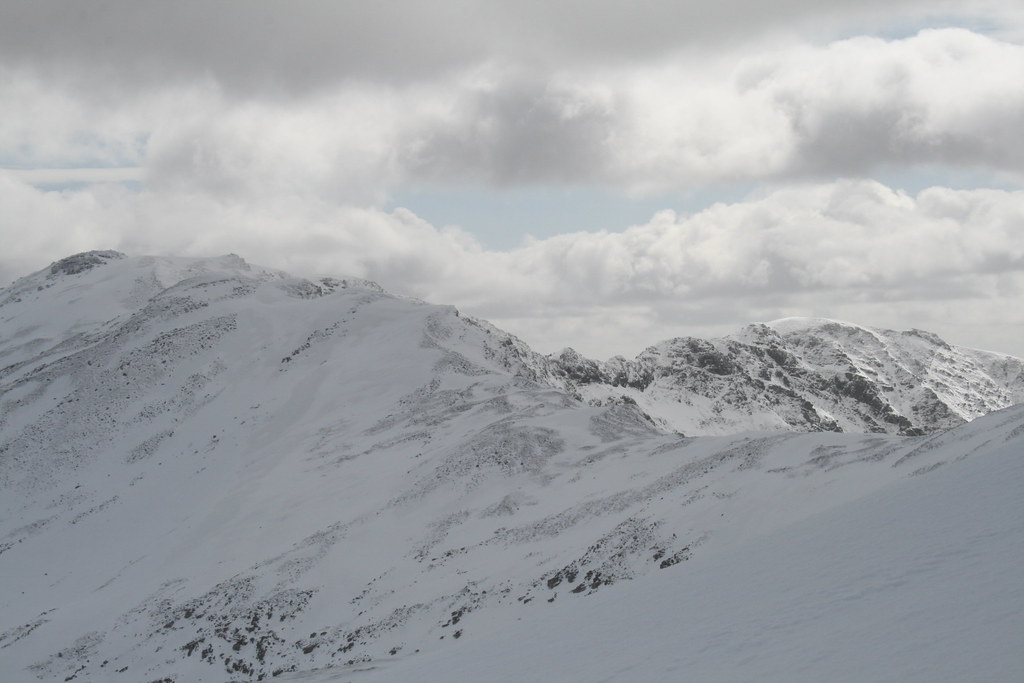 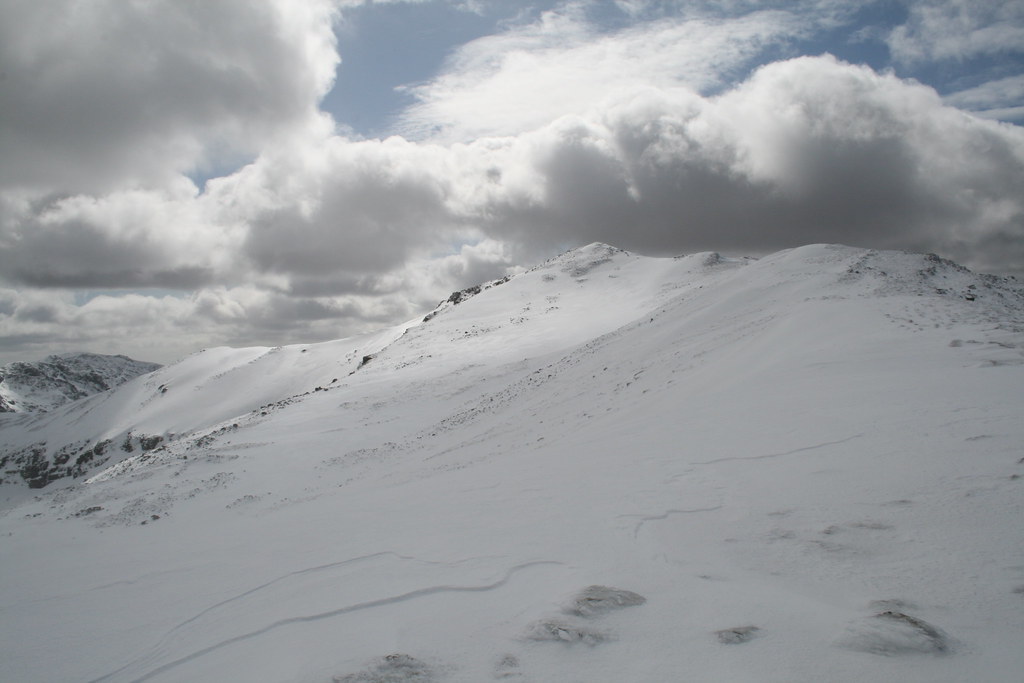 There was a fair amount of cloud but it was above the tops.  Showers blew by in the distance trailing their grey sheets.  But they missed me.  The views back to Loch Assynt, flanked by Quinag and Canisp were nice.  Views north and east were limited by the lack of clarity in the air, though Ben Hope and Ben Klibreck could both be made out. It was 10.55am. 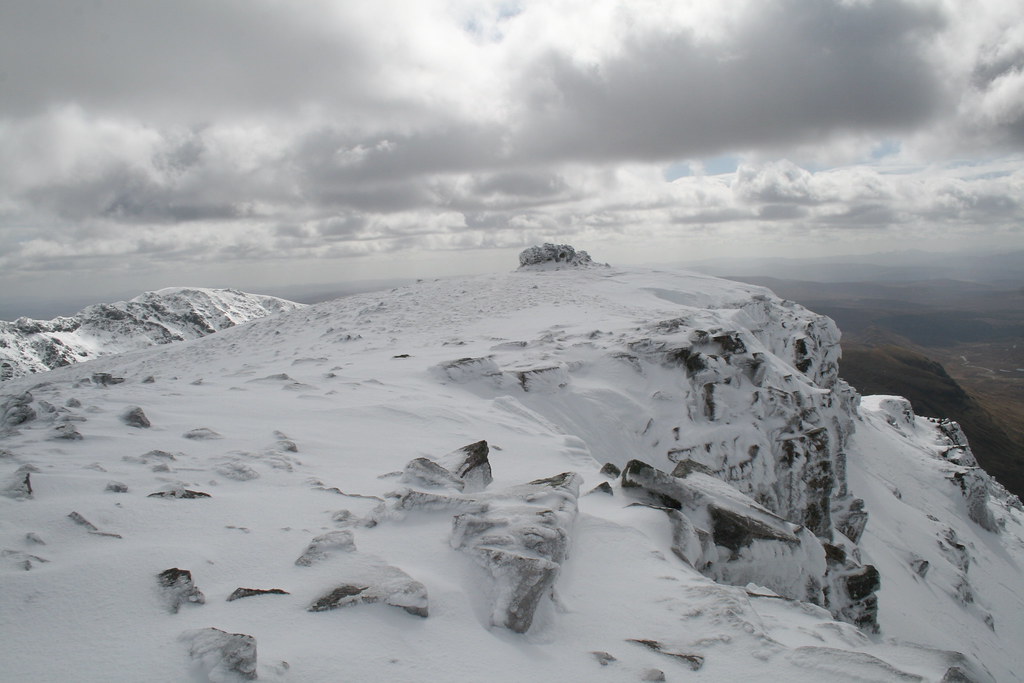 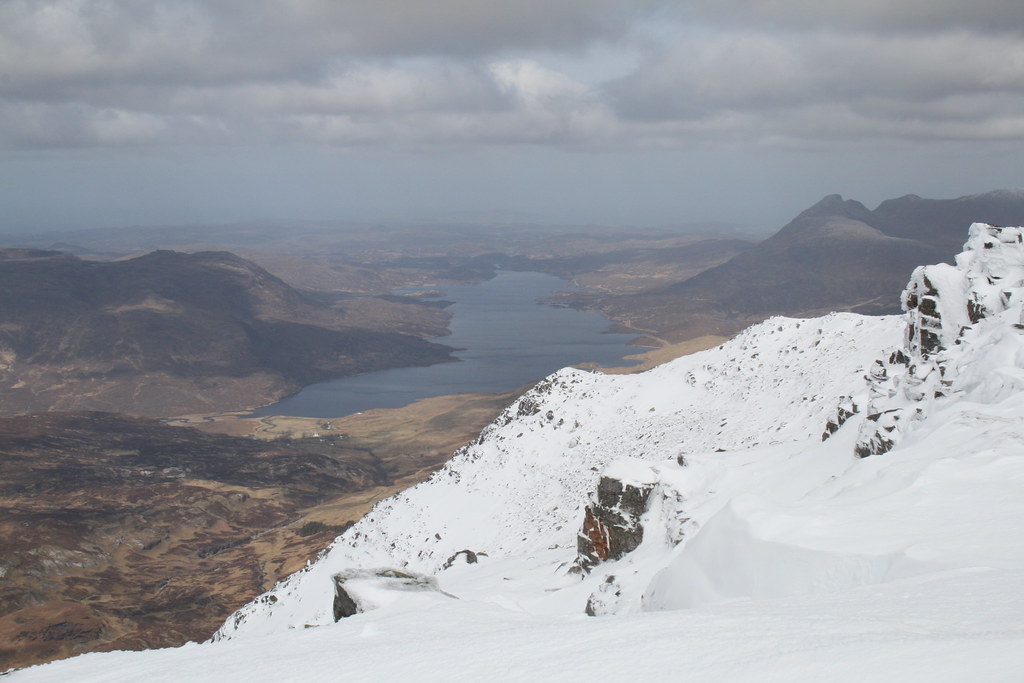 I did not stay long.  One of my objectives for the day was the south top of Ben More Assynt in my determined attempt on completing the munro tops.  Whether I would achieve this objective I was uncertain at this stage given the conditions.  The ridge beyond Ben More Assynt involves some straightforward scrambling in summer conditions, including one or two “bad steps”. 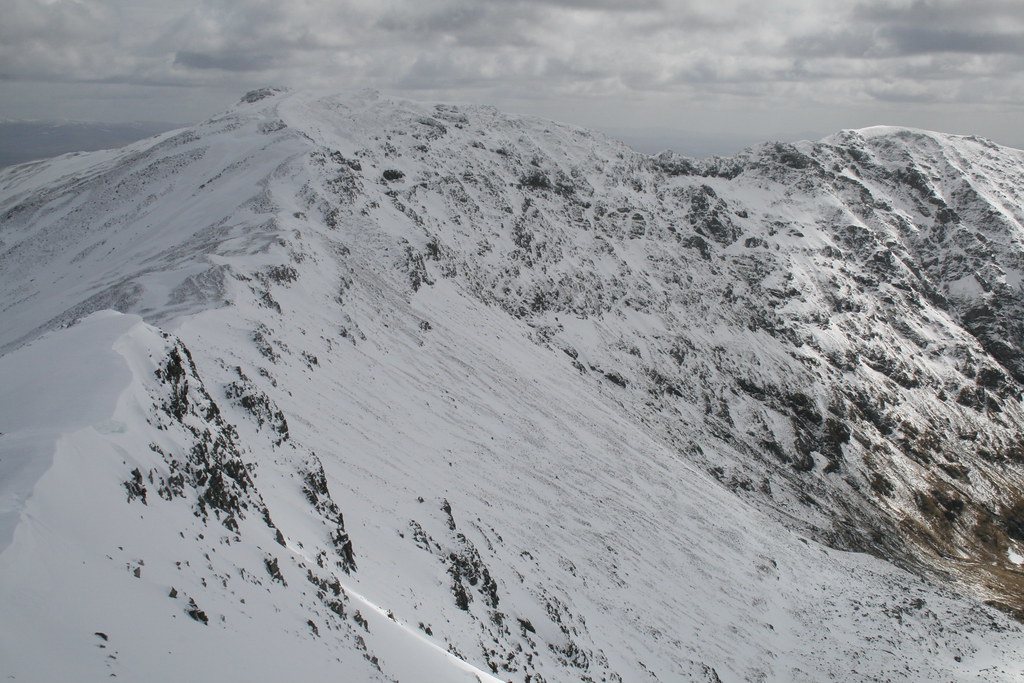 I was next to tackle the ridge down from Conival.  The start is hidden on the ascent and at the summit.  There was a short sharp drop on rocky ground which then eased just slightly with open hard snowy slopes.  I should have had those crampons on!  The ridge was slightly corniced in parts.  The low point on the ridge was soon reached.  There is a small intervening bump.  Here the wind really whipped up throwing spindrift in my face.  The snow (when it fell) had been largely deposited on south facing slopes.  Now the south westerly wind was flinging it back over to the northerly aspects.

Dubh Loch Mor did not look that “Dubh” in the coire to my right.  This Loch was going to be, I hoped, on my way back. 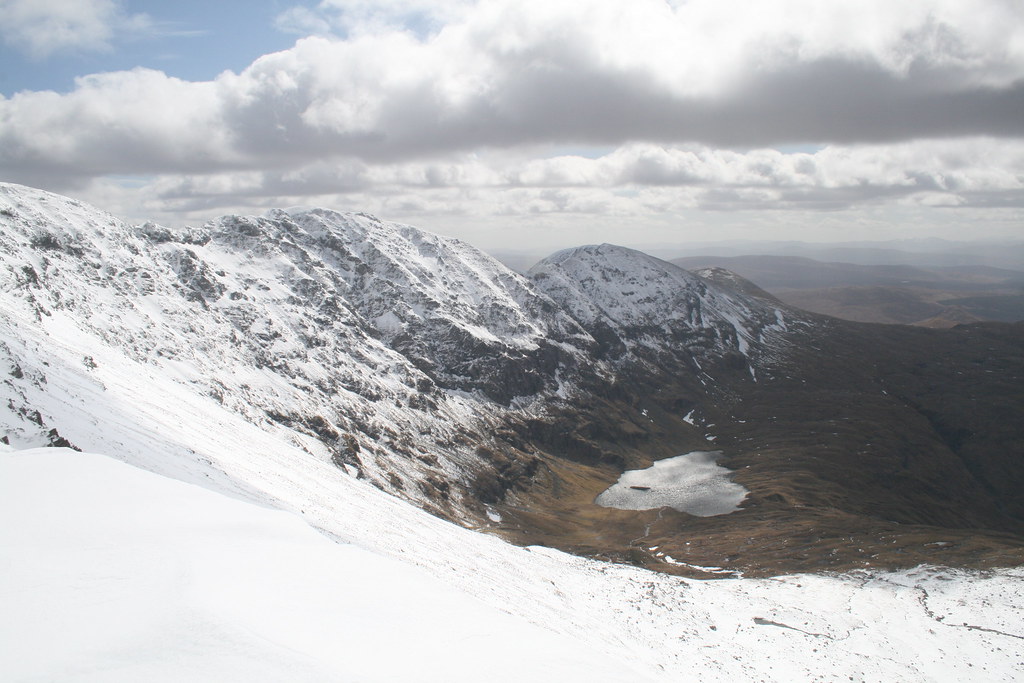 The summit of Ben More Assynt is a little plateau with rocky knolls at either end.  The northerly is the slightly higher point.  I dumped my sack and poles and then undertook the short icy scramble to reach the cairn here.  It was 11.50am.  Two lochans nestled in the coire to the north of the Conival/Ben Mor Assynt ridge, one still frozen and the other a pleasing aquamarine colour. 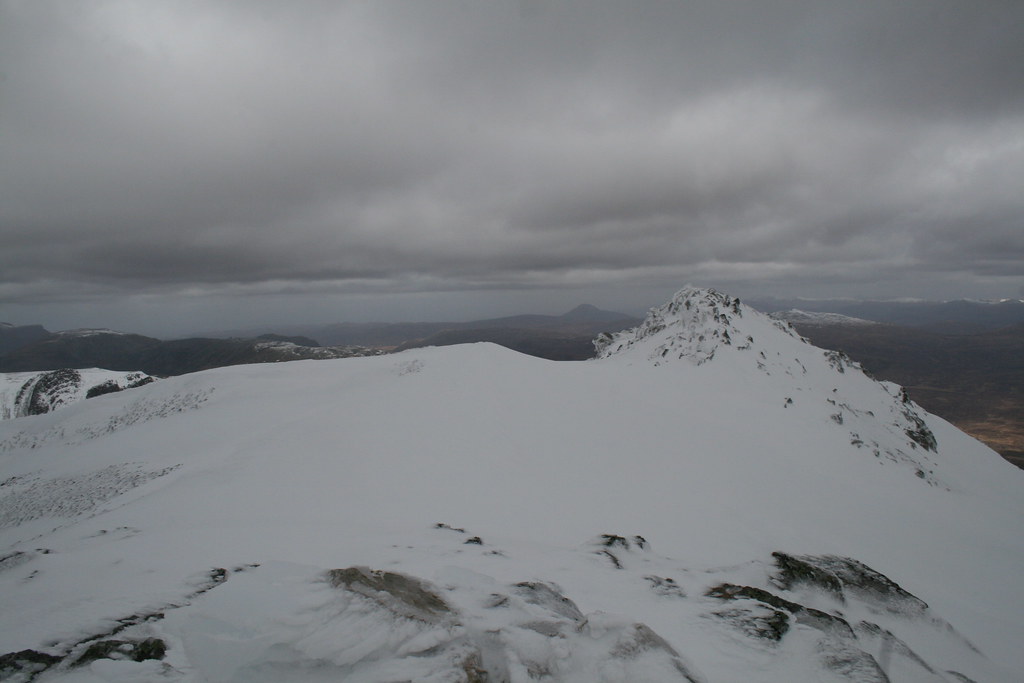 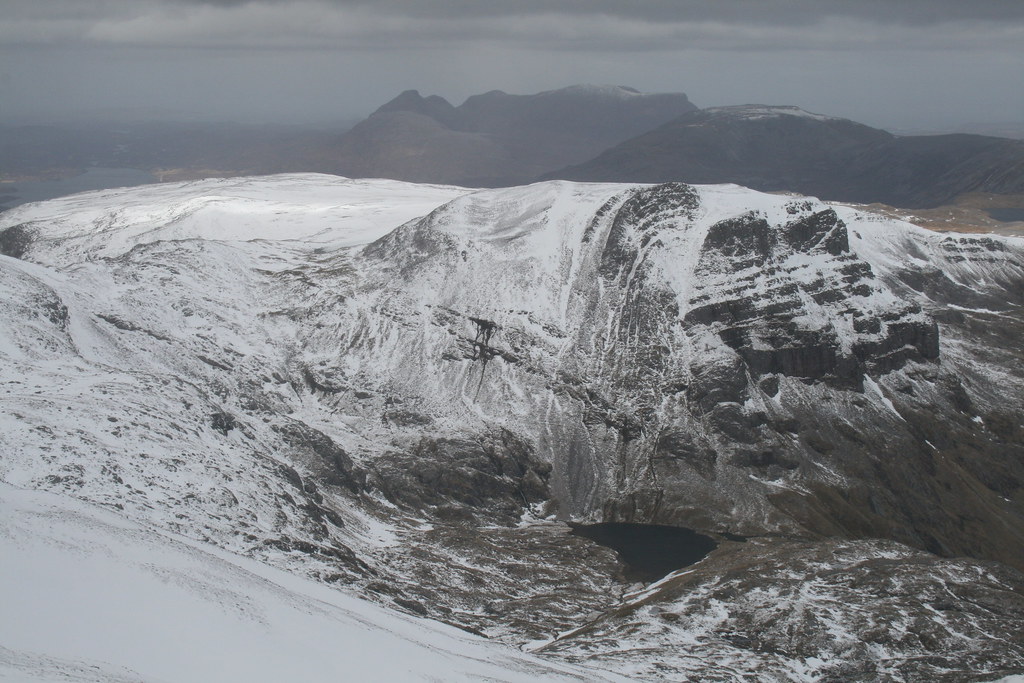 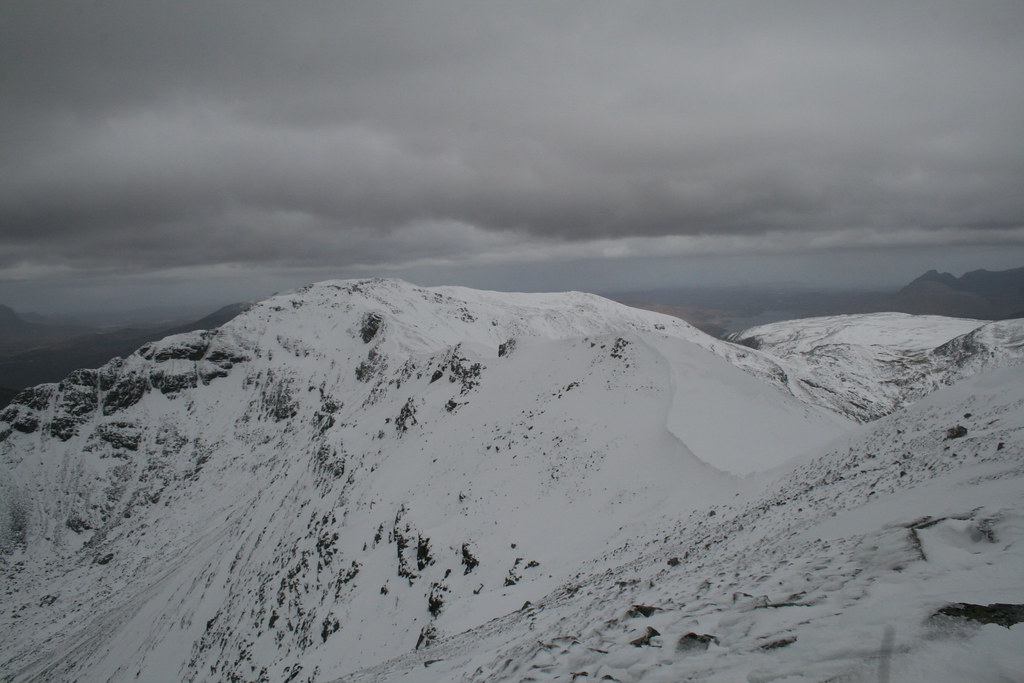 I then wandered across to the other cairn and hunkered down for something to eat.

It was now decision time – to go for the south top or not?  Well I thought at least I would go and have a look at what it entailed. 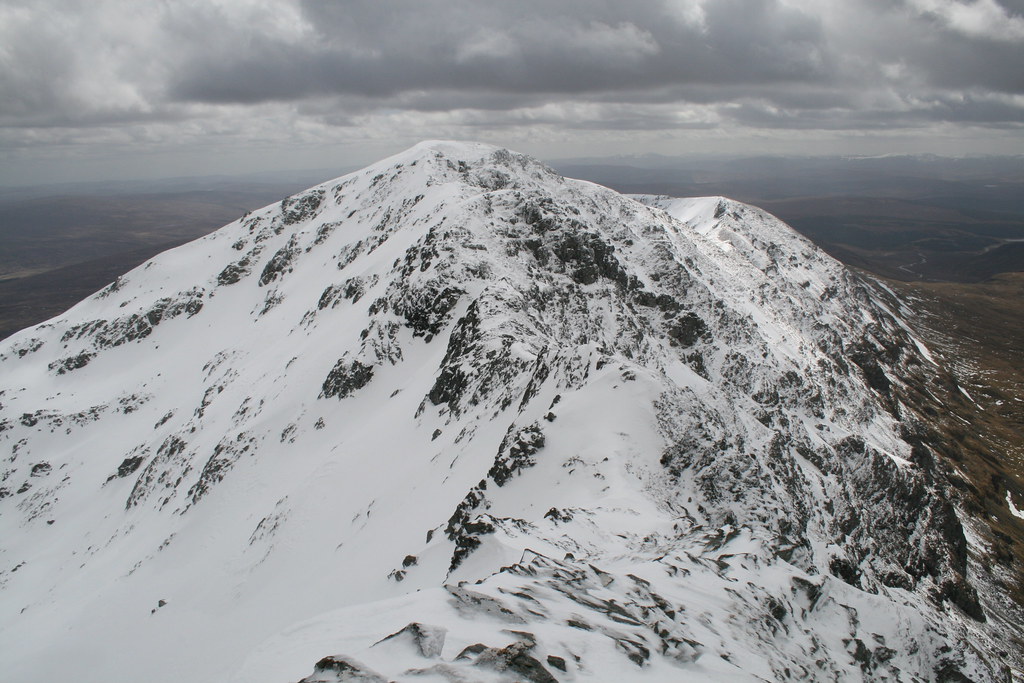 The picture here lacks depth and so does not give a full appreciation of what is involved.

I did not get very far though before I was at last forced to put on my crampons.  Away went the poles and out came the axe.  The description in the SMC Munros book refers to this ridge being like the Aonach Eagach with tilted slabs creating bad steps.  This was a little disconcerting when on one’s own.  I proceeded with care and intense concentration and I think I must have passed one difficult section without really noticing it!  There was really only one tricky bit.  This obviously was a tilted slab which might have been crossed a cheval.  I was concerned that the soft snow might just slough off with me on it.  So I adopted a Clach Liath unorthodox technique that had me across this 30m section.  From then on it was just easy scrambling to the south top.  Here I rested for more food.  That last section had taken 40 minutes plus time for strapping on crampons, as much as the section from Conival to Ben More Assynt. 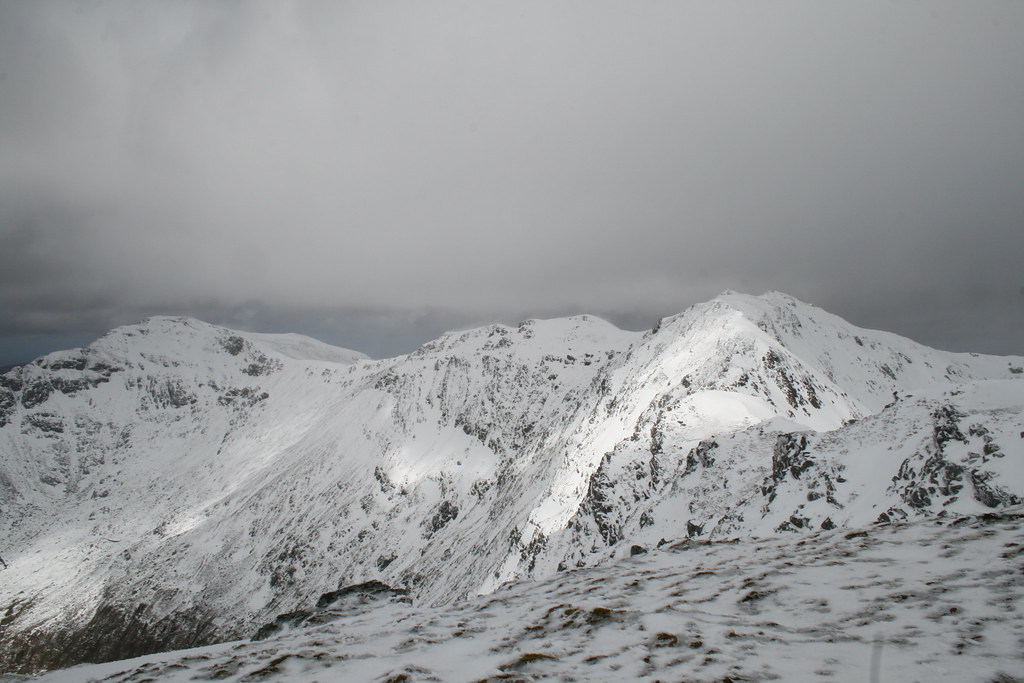 Here I was hit by my first and only shower of the day – a five minute battering of hail and icy crystals.  The way from here back to Conival looked particularly rough.  The thin line of Loch Shin was visible to the east.  Ben Klibreck appeared near, if a little gloomy. 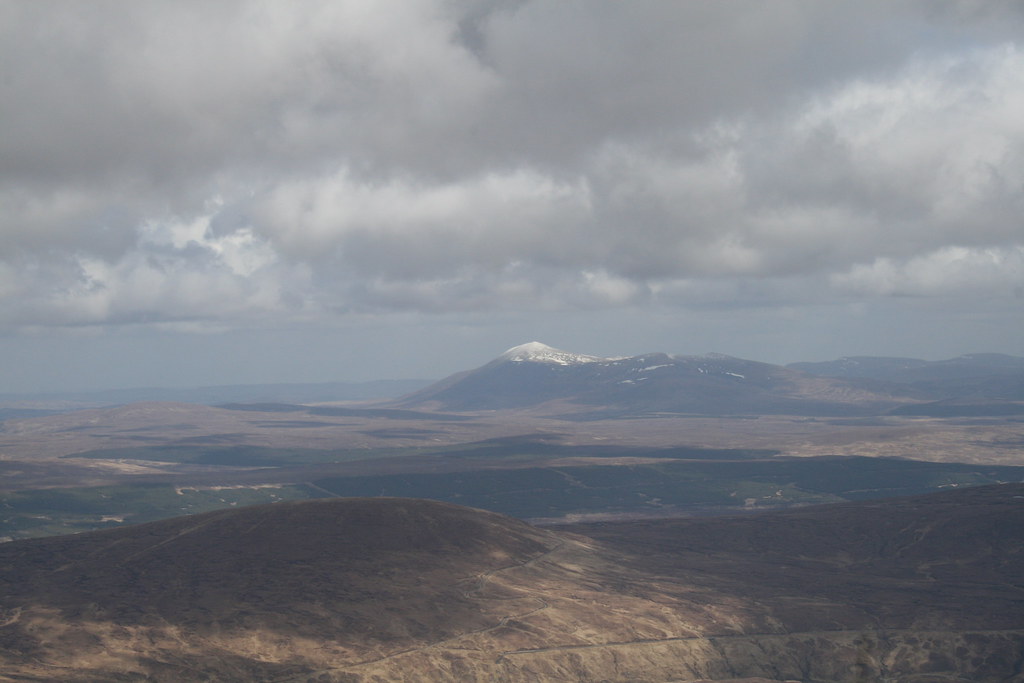 Having taken on some more food I continued south along the ridge.  At the dip between the south top and Carn nan Conbhairean there is supposed to be a way down one of the gullies.  I did not fancy the look of that from above (or indeed afar when looking at these slopes from Conival) so I continued on to the top of Carn nan Conbhairean. 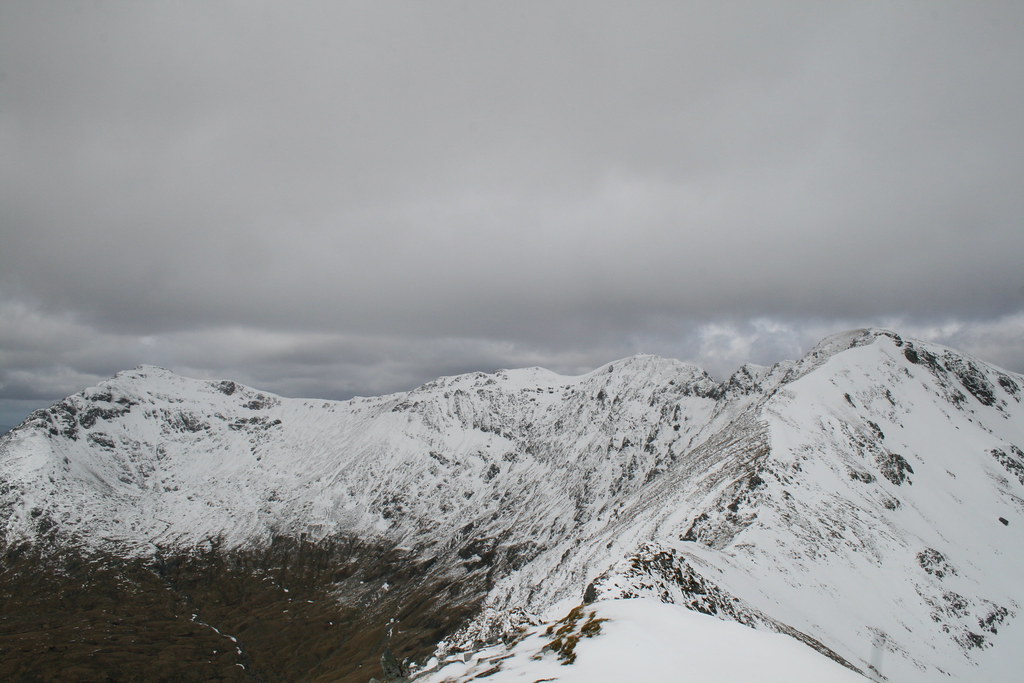 From here easy, if stony, slopes could be followed in an arc first south west, then west and then north west so as to avoid the clifflets on the western side of this hill.  The area was teeming with deer.  I headed for the western side of Dubh Loch Mor.  It was annoyingly a little up and down along this stretch but the views up to Conival and the linking ridges were good. 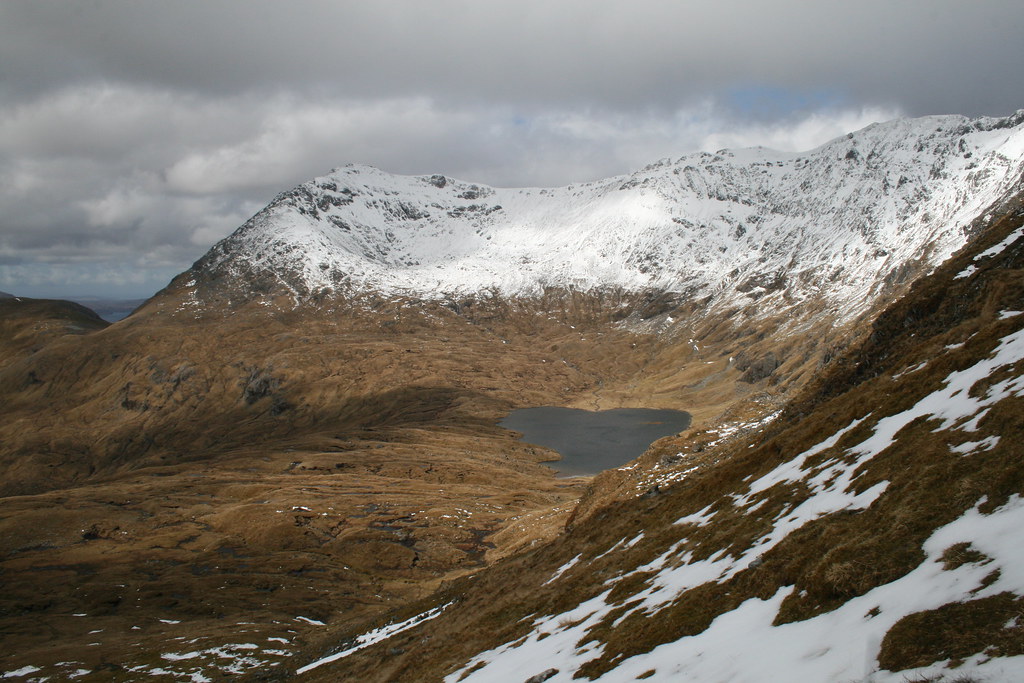 After crossing the exit stream from the Loch there was then a rising traverse up to Am Bealach, the bealach between Conival and Breabag Tarsuinn.  Here there were a number of tracks along the bealach.  Most were probably animal tracks.  The bealach narrows and then widens suddenly as the river plunges down a rocky gorge.  The track such as it is splits with one following the steep descent of the river and the other actually rising a little above the gorge so as to avoid another cut in the hillside on the right.  I followed the latter.  The path does run out of steam when the boggy ground a few hundred feet below is reached.  Here the choice is to trend to the right and, eventually, pick up the track followed on the outward journey or to make your way to the left and look for a continuation of the track that leads to the Traligill caves.  I did the latter because I wanted to have a look at the caves. 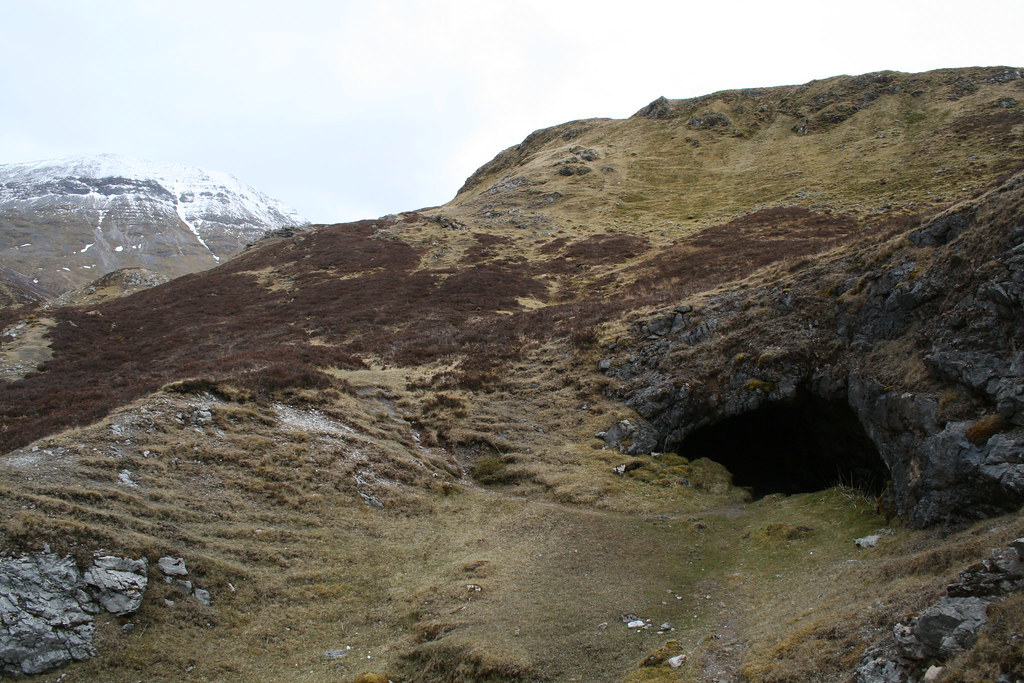 Tracking down the caves is made easy by the worn footpaths leading to them.  By here the river has disappeared underground, but it can be heard roaring nearby in one of the caves and there are a couple of slits in the rock where a view down to the frothing water can be seen.  This is The Waterslide.  Going to the caves is a nice diversion, and not too far out of the way even if the usual route to and from Ben More Assynt is taken.  There is a lot of (pre-)history associated with these caves and those at Allt nan Uamh that it is worth reading up on.  See for example:

After the exploration it was a pleasant walk back to the start.  A total round trip of 9¼ hours including stops and the cave exploration.

[This blog was originally posted on WH here http://www.walkhighlands.co.uk/Forum/viewtopic.php?f=9&t=31522]