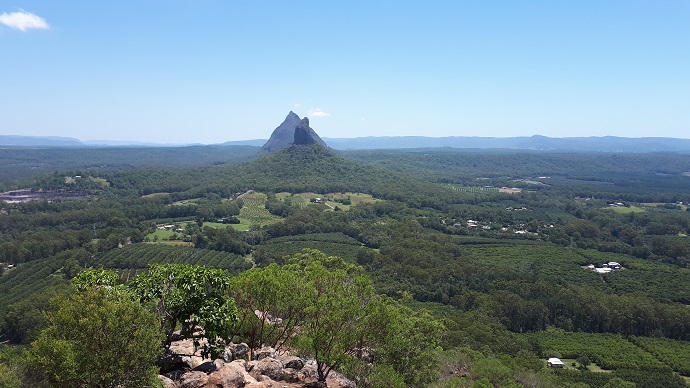 The Glass House Mountains are a diminutive set of ancient intrusive volcanic plugs situated in the hinterland of the Sunshine Coast, Queensland around an hour’s drive north of Brisbane.  They were named by Lieutenant James Cook during his epic voyage along Australia’s east coast.

The Glass House Mountains are remnants of volcanic activity that occurred approximately 25–27 million years ago.  Molten rock filled small vents or intruded as bodies beneath the surface and solidified into hard rocks—trachyte and rhyolite.

The area was also a special meeting place where many Aboriginal people gathered for ceremonies and trading. This place is considered spiritually significant with many ceremonial sites still present and protected today.

Last year when visiting friends (and after we had been to the heights of the Snowy Mountains) we climbed Mount Ngungun at a lofty 253m.  Climbs of most of the Glass House mountains are often just half day affairs.  Mount Ngungun is no different.  The climb at that time followed a rough and partly eroded track that led to a short and entertaining rocky crest.  The path has just re-opened following repairs and erosion control.  The view from the top shows Coonowrin and, behind it, Mount Beerwah.

There is also a good panorama of the other tops – here with Mount Tibrogargan to the left.

We returned to the area this August and took the opportunity to climb three of the others.

First up were the Coochin Twins (sounding a bit like a 1980s boy band perhaps).  These lie to the north of most of the remainder of the group just to the south west of Beerwah.  The start point is a little tricky to find with the car park looking as though it is up a private drive.

Once there the start to the climb is obvious by a gate with a sign.  100m further on the right (but this time unsigned) a rough path leads off uphill. The route then is straightforward. Again there are some nice views from the top at 235m to others of the Glass House mountains.

Mount Ngungun is in the foreground now with Mount Tibrogargan the dominant peak to the left.

The trail continues to the east top with some easy scrambling and further views.

Here are Coonowrin and Mount Beerwah with the main top of Coochin on the right.

From there descend north along a broad ridge still along a trail until a fire road is reached. Turn left and you’ll soon be back at the car park.  The whole round took slightly less than two hours with stops on each of the summits.

From our friends’ house I took this shot of Coonowrin together with the obligatory Kookaburra.

The next day after doing touristy stuff in the area we made a late afternoon ascent of Mount Beerburrum at 278m.  This top is located just to the north west of the township of the same name.

From the car park to the north of the “mountain”. The start is signed. A tarmac path leads steeply up to the summit where there is a viewing tower (for the benefit of fire watchers rather than bushwalkers).

But access to this is permitted and enables wide ranging views to be had from Brisbane in the south, the coast to the east, other Glass House mountains and other ranges to the north and west.  Great for relatively little effort.  As with most of the Glass House mountains this one has a lot of prominence relative to its height.

We returned the same way.  It only takes 30 to 40 minutes to reach the summit from the car park.

The next day we turned to my main objective, the tricky Mount Beerwah (556m).  This video that gives a good feel for this climb and the amount of scrambling involved.

There is a public car park at the end of Mount Beerwah Road which becomes a gravel road for the final kilometre.  A pleasant, if short, walk takes you through some woodland and eventually to the base of the climb.  It matters not whether you take the path or the continuation of the road out of the car park.  They both end up in the same point where there are some information boards.

The climb will begin with a steep ascent which will almost certainly involve hands.  The direct route involves some bold moves.  There are alternatives to the left however.  Around 8 people turned around at this point and decided that the initial section was too difficult for them.

Once up the initial 30 metres or so of ascent, things become a little easier but no less interesting as the volcanic slabs continue at a slightly easier angle.  Some respite (if needed) can be had by aiming for any groups of trees where “paths” run intermittently through them.  The route should probably not be attempted when there has been rain and the route is wet.

At the top of the slabs, it is necessary to find the continuation path that climbs up amongst the trees.  Here I came face to face with a rather large iguana that took some persuading to move out of the way!  In another 5 to 10 minutes, the continuation path disgorges you on to a terrace where some respite from both the steepness and the sun can be found.

Turn right.  The interest continues as you continue with the evidence of volcanic activity around and above you.

You are now walking beneath the Organ Pipes which are seen to good effect both from the base and from a viewpoint (unmarked) you pass further up.  The Organ Pipes are columns of trachyte (in part overhanging) formed as the molten rock cooled within what is now the remnant of a volcanic plug.

At the end of the terrace there is a short awkward scramble and the path then continues in an upward direction.  The route is clear as it weaves between the vegetation and occasional short sections of scrambling can be found.

The top soon comes and the reward is a panorama of the other Glass House Mountains and views to the coast.  Mount Coonowrin pops up below with Mount Ngungun behind it.  Mount Tibrogargan is off to the right.

The summit was somewhat spoiled by zillions of flying ants and it was difficult to take photos without them flying in front of or landing on the lens!

The way down is to reverse the route of ascent.  This went fairly quickly.  On the steeper sections it was easier to see foot and hand holds from above than it had been from below.  At the final section I found an easy route that angled downwards to the right on small ledges. That avoided most of the steepness.

This all took 2 hours 50 minutes return from the car park.  It was a very enjoyable climb and quieter than the others because of the initial difficulties.  I had the summit to myself (with the ants) and only passed a group of three on my descent.  I have to admit that I was out of practice with my scrambling.  I had stiff upper arm and pectoral muscles for a couple of days after the climb!

So if you are ever in the area, these little mountains are recommended for short excursions.  And the weather is great most of the time as well!