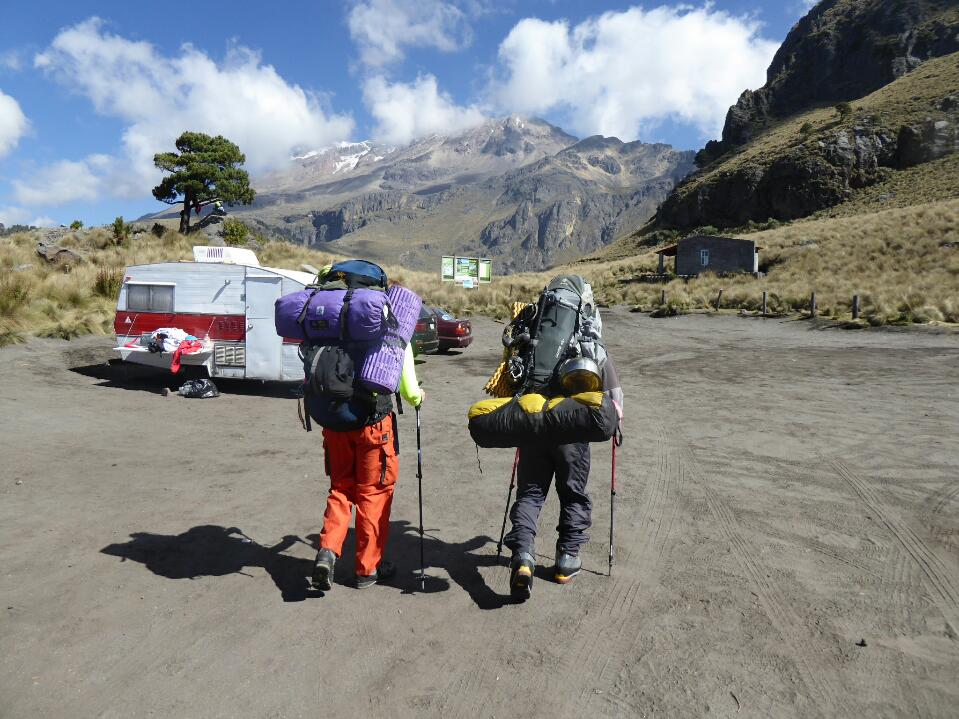 Access to Iztaccihuatl (henceforth Izta) is from the Paso de Cortes, a high pass lying between Izta and Popocatapetl at an elevation of around 3,600m. Cortes was the murderous Spaniard who did away with the Aztec empire. A long and winding road runs up to the pass from the town of Amecameca. Amecameca lies on the other side of the mountains from Huantmala. So it was quite a hike around.

We stopped in Amecameca for lunch. Whilst Miriam and Ricardo shopped for supplies, Derek and I were left to our own devices to explore. The place was not exciting. Buildings had the usual down at heel look to them. Even the church on the main square was closed for works. In the main square a children’s funfair was being set up, large trucks clogging up the road on two sides. In front of the church was a market. We wandered through the narrow passages between the stalls. As with the rest of the town it was a hive of activity. But such explorations only took 20 minutes so we resorted to the restaurant where we had arranged to meet our guides for lunch and killed 30 minutes with a coffee.

As this establishment did not have WiFi, we found another that did after lunch to connect with the world!

Then began the 25 kilometre drive to the Paso de Cortes. The road wound its way up 1000m. Once we left the flatlands around Amecameca we entered the pine forest that clad the mountains. Views were limited because of first the smog (that drifts over from Mexico City) and then the clouds. Soon we were above both. The plan was to check in at the visitor centre and then drive to a climbers’ hut at an elevation of 3,800m ready for the start of our ascent the following day. 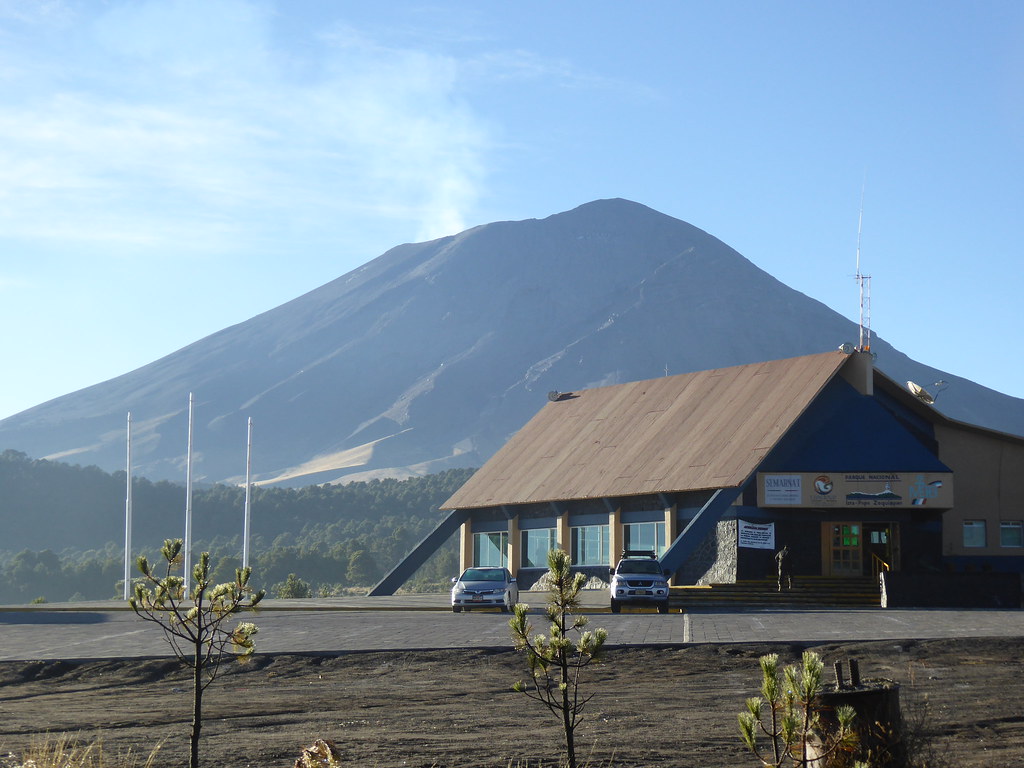 Visitor centre with Popocatapetl behind, note the steam rising 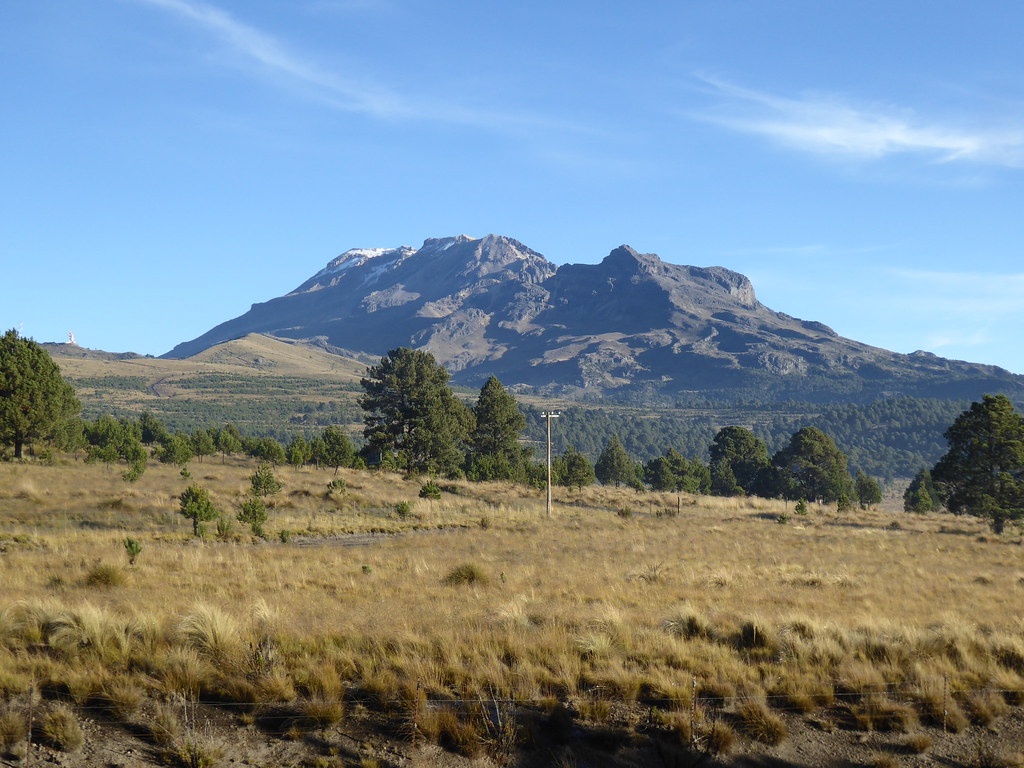 View of Izta from visitor centre.

The hut sleeps 24 but 63(!) were already booked into it. Now one line of thought might be that an additional four people would make little difference. However the alternative solution agreed upon was that we would “camp” out on the visitor centre floor! This had the advantage of having a lot of space and clean toilets but the disadvantage of being 200m lower than the hut, so would be less beneficial in terms of acclimatisation. So we emptied the car of our gear and piled it up in a corner to be looked after by the visitor centre custodians and we hopped back into the car.

Derek and I were to be shown the starting point for the climb. This involved an exciting, bumpy eight kilometre drive up a dirt road. After 25 minutes we arrived at La Joya where there was a large car park and a row of four stalls selling those items you might have forgotten for the climb. A further 5 minute walk further on the view opened up and the start of our route was pointed out. The mountain itself was still largely shrouded in cloud. This was not uncommon for the time of day. The normal pattern seemed to be that early morning had the mountain clear, clouds would then build up during the day and it would clear up at the end of the day.

The route would start from La Joya with a 150m descent into a valley before starting its long pull up and up. At just below 4,000m in elevation any vigorous movement still left me gasping for breath. That was not too great given that heavier packs would be carried in the morning. Still I would deal with that when the time came.

On the way back to the visitor centre we diverted to have a look at the climbers’ hut we would not be staying in. It nestles in amongst a plethora of telecoms masts and buildings – not the most attractive of sites but with great views if you stand with them behind you.

Back at the visitor centre we could not start spreading out until it closed at 9pm. But that did not stop Ricardo from firing up a couple of stoves to make some hot drinks and to start the mealtime process. A Thursday evening hereabouts evidently does not attract many visitors.

Around 8.30pm we unpacked our sleeping gear. By the time the visitor centre staff switched off the lights at 9pm we had settled down for the night. 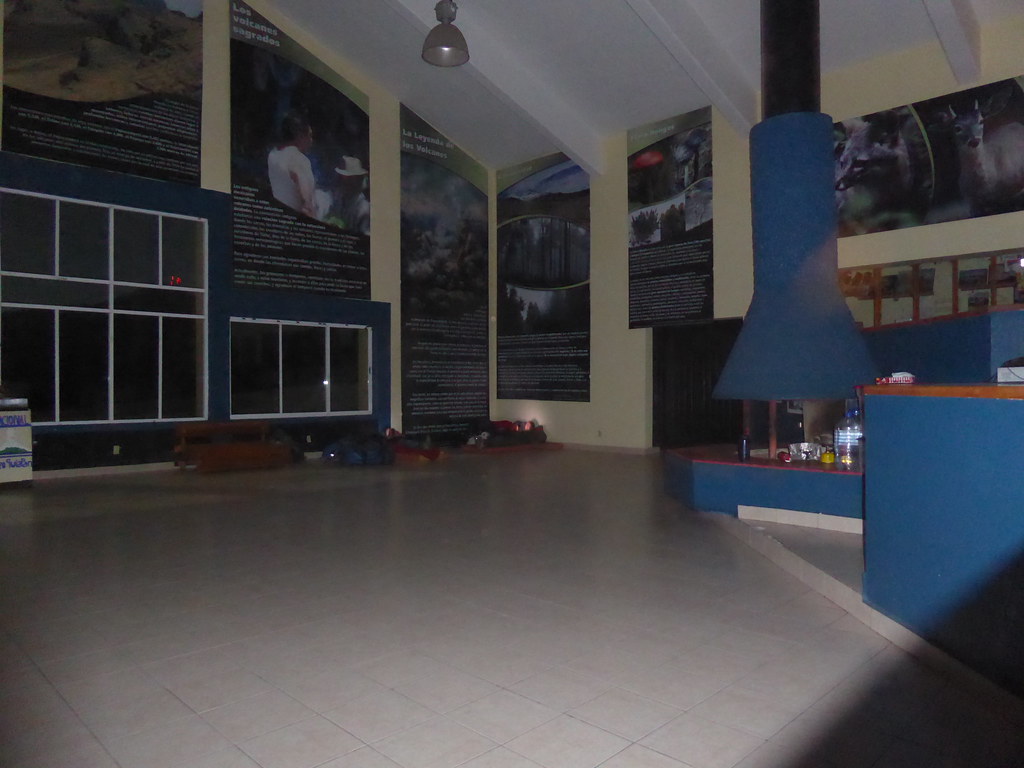 The next day was not going to be an exhausting one. But we had to be up and finished breakfast before the centre opened at 7am. By 6.30am we were eating pancakes cooked over a camping stove. Whilst we had not finished by opening time (sharing some pancakes with the visitor centre staff might have helped) no-one seemed to mind.

Today we were going to climb to around 4,400m and set up camp in readiness for a summit attempt the following day. So off up the bumpy road to La Joya we went, setting off from the car at 11am. Whilst Derek’s and my packs may have been heavier than usual with sleeping gear and food for two days, they were nothing compared to our guides’ who also had the tents, stoves, ropes (not that these were needed) as well as their own gear. It is amazing how strong as well as fit these guides are. 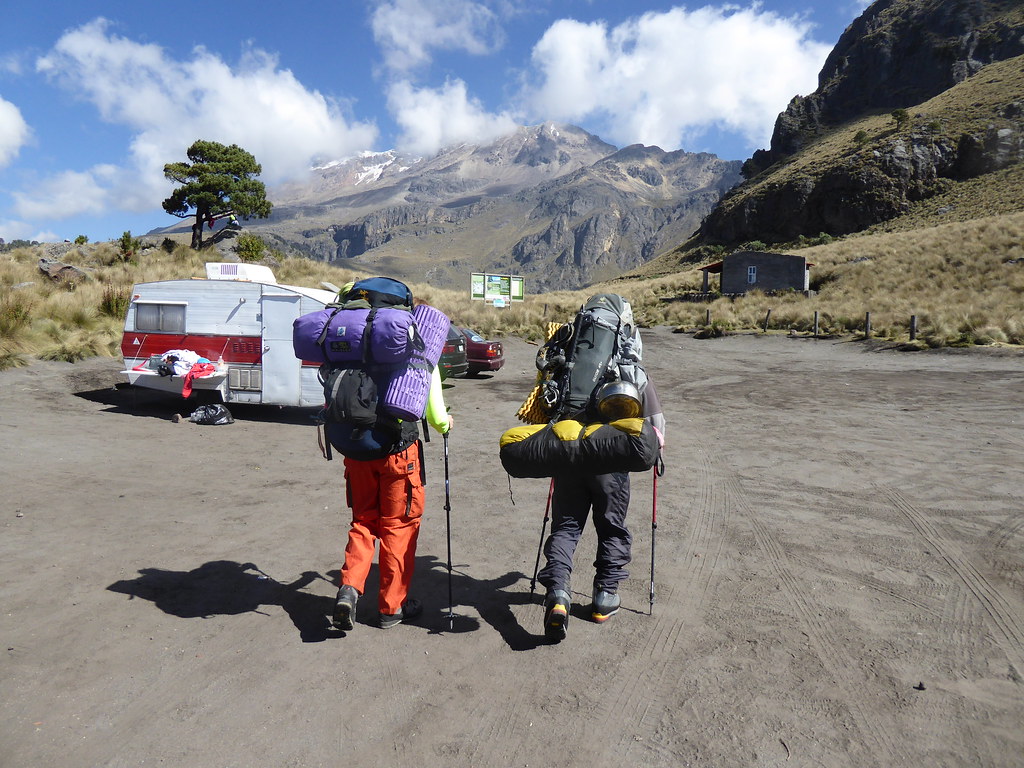 Izta was doing her usual. We set off and promptly lost 150m of valuable elevation. As we began to regain it, cloud started to drift in. The wind was light and occasional glimpses of the way above could be seen. The path wound its way up first amongst hardy shrubs, long grasses and spiky plants and then into a rocky, rubbly landscape with short grasses. We stopped a few times for a rest and food/drink, the cloud continuing to swirl around us. 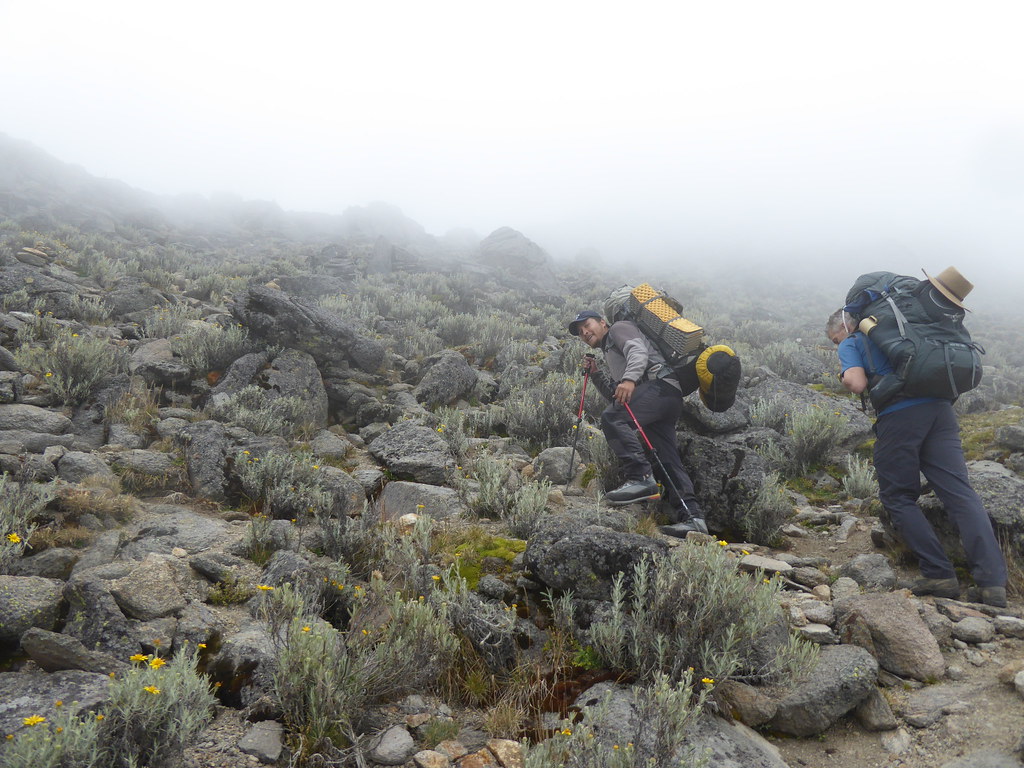 A final steepening up and through a break in a cliff saw us suddenly at our camp site. Whilst we had gained just a net 400m in altitude we were now at about the same height as La Malinche. It was 2.30pm and we had made the day’s climb in less than the 4 hours we had been told it might take. Derek and I helped with setting up the tents before we ate our packed lunch. The rest of the afternoon was spent festering and allowing our bodies to adjust to the altitude. 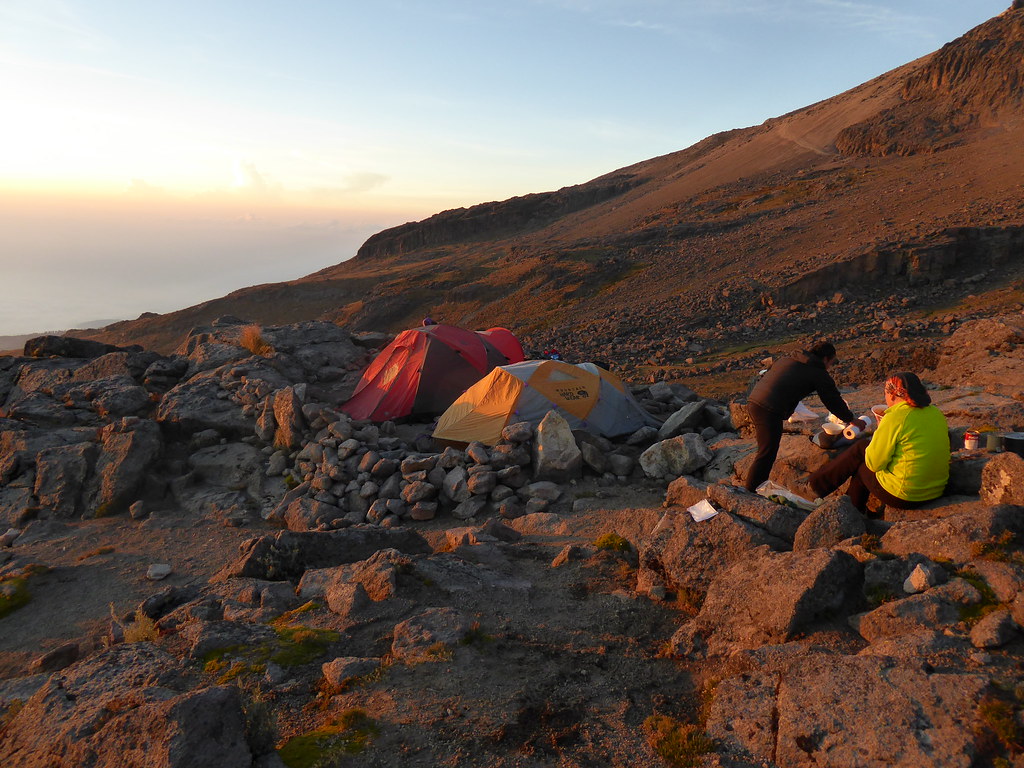 The warm glow over campsite at sunset

I lay down for a snooze. Although the idea of a rest seemed like a good one and I dozed off and on in the tent, I got up with a slight headache. Well at least the cloud was starting to lift and break. Blue patches appeared above. It was quite therapeutic just watching the clouds and the different views created by their movement. It must be something about Mexican clouds but even at their thickest they didn’t dampen hair or clothes.

Ricardo took the opportunity to get out his little gadget to test our oxygenation levels. Derek and I were both around 87% – it’s normal for this number to go down with increased altitude.

And the evening just became better and better. A sea of cloud formed way below. At our level and above it all but disappeared. We ate and drank and watched. As the sun set in front of us we and Popocatapetl were bathed in a deep red light. If anyone doubts why I or anyone else does this activity, then times like this are a part of the essence to the answer why. 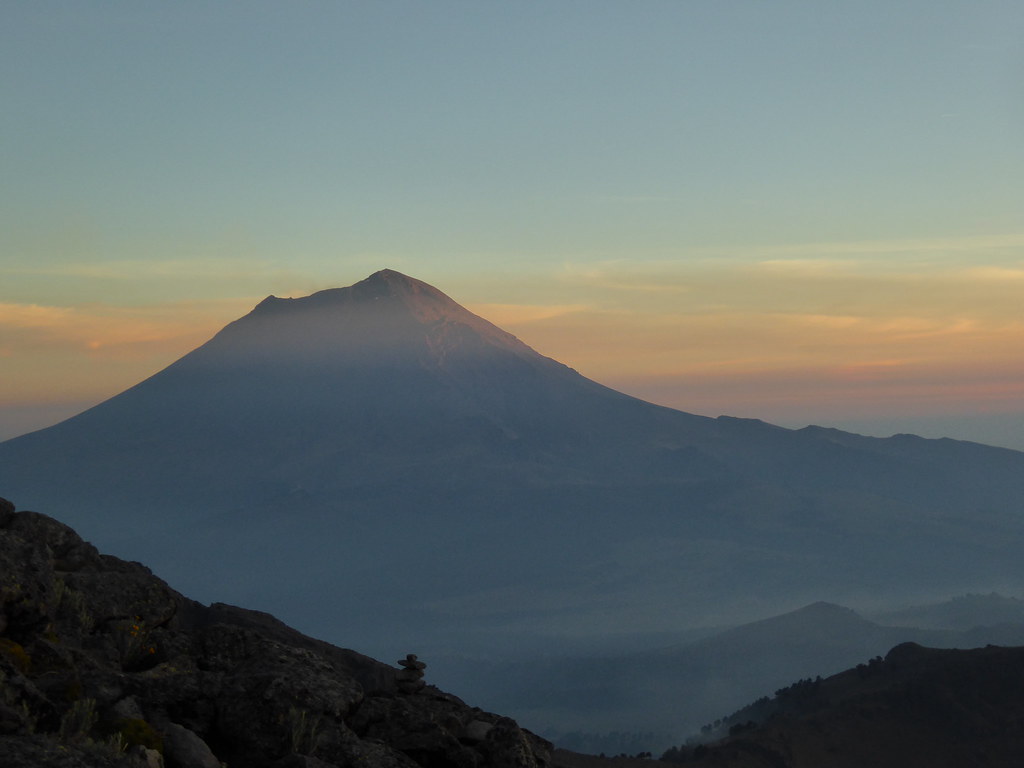 As the sun dipped below the horizon at around 6.30pm a chill wind picked up and the temperature dropped quickly driving us into our tents and the comfort of our sleeping bags.