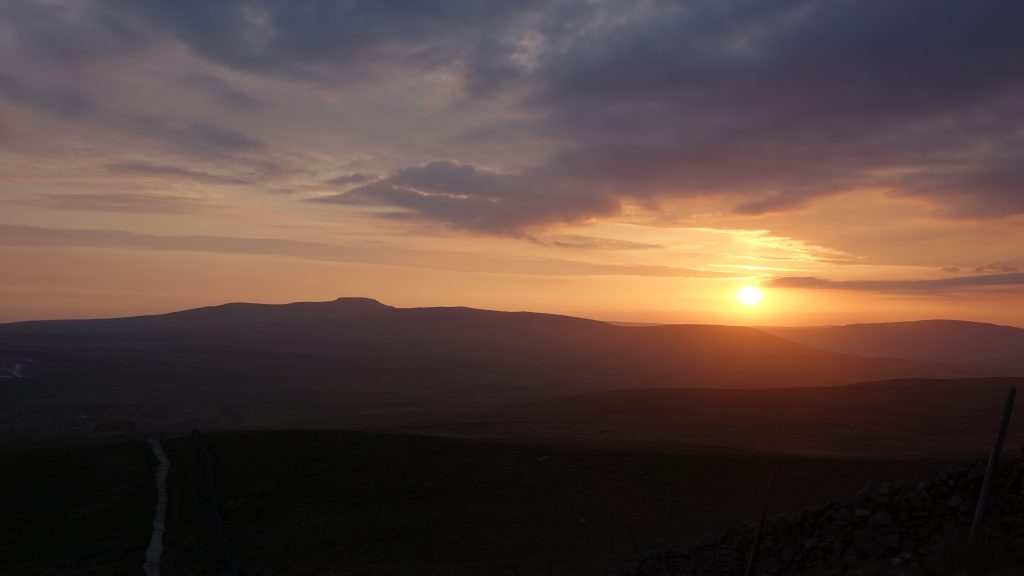 And so it was a couple of weeks ago I decided that for my 17th (yes 17th) time around the Yorkshire 3 Peaks that I would do a night-time jaunt.  I thought that I could catch the sunset on Pen-y-ghent and sunrise on Ingleborough.  Poor old Whernside would be traversed in the dark.  Well it almost worked out like that.

Leaving Horton-in-Ribblesdale at 8pm I had about 1¼ hours to reach Pen-y-ghent’s summit.  I normally manage this section in an hour or so.  And so it was that I watched as the fiery sun sank to the north of Ingleborough’s silhouette.

Unsurprisingly perhaps I was alone to enjoy the spectacle.

There was enough light to descend off Pen-y-ghent’s western flank.  A new flagged path has been constructed in the upper parts to save the hillside from the thousands of feet that pound around this challenge.  At this point the path also forms a part of the Pennine Way.

A new moon hung ahead of me.

It gradually sank in the sky as I proceeded towards Whernside.

The path is well made and mostly easy to follow.  I was not going to follow the original route over the bogs in the dark.  Soon my head torch was on.  Creatures loomed in the dark – sheep, no doubt surprised to see a human at this time.

Occasional birds cried across the lonely moor.  At one point the “made” path ends and I felt my way across this section, previous knowledge being vital.  Larger beasts loomed, crunching (or so it seemed).  But they were disinterested cows.

And so I pass Dismal Hill and over God’s Bridge and then Nether Lodge which is cloaked in darkness and through the farmyard at Lodge Hall which is also dark but a couple of collies shut up in a sheep trailer make sure the world knows I am about.

I emerge on to Gauber Road.  One car shoots past me, the only sign of human life until I reach Ingleborough.  I am Ribblehead at midnight.

I don’t see the railway viaduct until I am almost at it.  Again I follow the “new” route to Bleamoor Sidings.  The signalman’s house is dark but lights blaze in the signal box itself.  A track testing train rumbles by, its headlights dazzling my eyes that are now accustomed to the night.

I pass over the aqueduct at Smithy Hill and start climbing.  I am now tired, through lack of sleep rather than physically, and I plod slowly on.  There are no sheep here but I hear the noises of the hillside and feel the chill of the night breeze.

I turn west off the Dales Way and in 10 minutes I am back on flags.  This eases the way up on to Whernside’s long summit ridge.  It is around two in the morning.  I am almost out on my feet.  The tarn to my left shows a silvery sheen.  The summit seems a long time coming.  The breeze is now in my face.

I squeeze through the wall to the trig point and the adjacent wind shelter.  Looking to the north east there is the first hint of the new day, a red tinge on the horizon.

I sit in the shelter, put on the rest of my clothes including gloves and take out some snacks and water.  I will have a rest here.  I lie uncomfortably on the narrow stone seat, body twisted.  I close my eyes.  I hear rustling in the wall – a mouse.  I relax.  20 minutes later I wake shivering.  But the stop has done me good.

It’s ten to three and I leave.

I make good progress further along the ridge.  The descent to Bruntscar is slow.  The path is poor – no place to twist an ankle or worse, at least at this time of night.  In a few hours, this path will be swarming but I take care.  The light from my head torch is losing the battle to the growing daylight.

The camp site at Philpin is full but no-one stirs there.  I pass by the Hill Inn and take the path immediately beyond it.  The grass is short and cropped.  The sheep are back.

I wind my way up through the limestone pavement, turn left and am back on a flagged path.  I remember the days when this was a bog trot.  Now I skipped over the squelch to the foot of the short sharp rise at Humphrey Bottom.  I have a brief rest here, and more to eat and drink.  I am not going to make Ingleborough summit for sunrise.

Soon I am up the steepening and then up another new path towards the summit plateau.  I can see Whernside across the valley.

As I emerge on the plateau, the sun is just popping over Simon Fell.  It is five twenty five.  I see the summit shelter ahead.  I also see a person.  He makes his way towards me and he introduces himself as John.  He had come up for sunset, gone back to his tent lower down the hill and come back up for sunrise.  I told him what I was doing and he agreed that I was the mad one!

He left me.  Alone again I took a few photos of first Pen-y-ghent.

I leave crossing the stony plateau and down to where the path splits for Horton.  Most of the summit area is a scheduled ancient monument.  If you look hard enough there is evidence of buildings and ramparts.

Warmth is now in the air and the breeze is dying.  John is ahead but I do not catch him and he leaves the path to where, presumably, his tent is.

A runner then passes me near the ruined shooting hut.  I have a last look back at Ingleborough.

It is then past familiar landmarks.  The Pennine Bridleway, Sulber Nick, more limestone pavements, the edge of the access land and finally the meadows down to Horton.  The air is still.  More cows lazily munch on the grass within a couple of metres as I pass.  One tosses her head, but none are interested in me.  By now I am passing walkers heading the other way.  It is going to be a busy day on Ingleborough.

It is also going to be a hot day.  I cross the rail track at the station.

Not a cloud in the sky!  Horton is heaving. The Yorkshire 3 Peaks will be busy.

I reach the car and crash out for a couple of hours dreaming of red and orange horizons, the calls of the night and sheep in the dark.

A couple of posts ago I mentioned that I had considered trying a winter round of the Yorkshire 3 Peaks.  I had not done this before.  So on 12th February I got my act in order and left the house early.  The forecast was not too bad promising clear tops by mid-morning.  As it happened this did not materialise and it was only as I was approaching the last of the three, Whernside, that things improved.

So I started (as a couple of weeks ago) by the Old Hill Inn and went anti-clockwise – Ingleborough, Pen-y-ghent, Whernside.  I saw no-one on Ingleborough, a group of six plus dog on Pen-y-ghent (and later passed more who were ascending) and three fell runners on Whernside.  So it was quiet!

It was quite wintry on the tops but pleasant in the valleys below the cloud with the ground generally being frozen.  I was a little disappointed with my time around of 9 hours 40 minutes but there was quite a bit of snow on Ingleborough and Whernside.

Here are some pics taken with my phone.  I was stiff the next day – clearly out of practice! 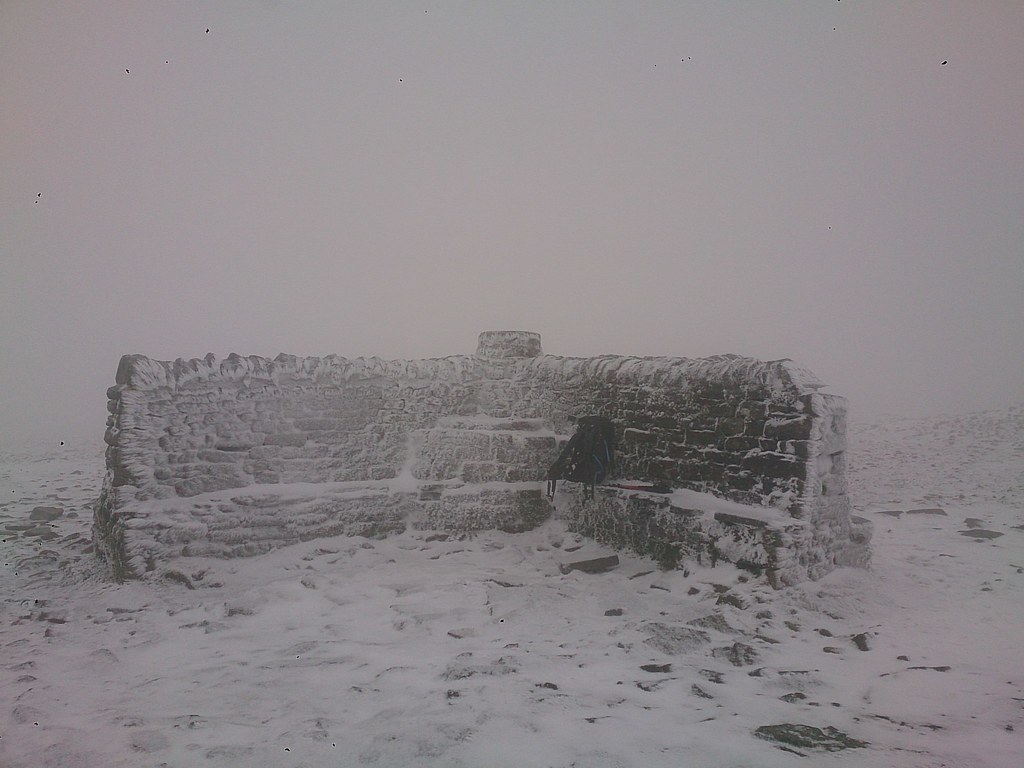 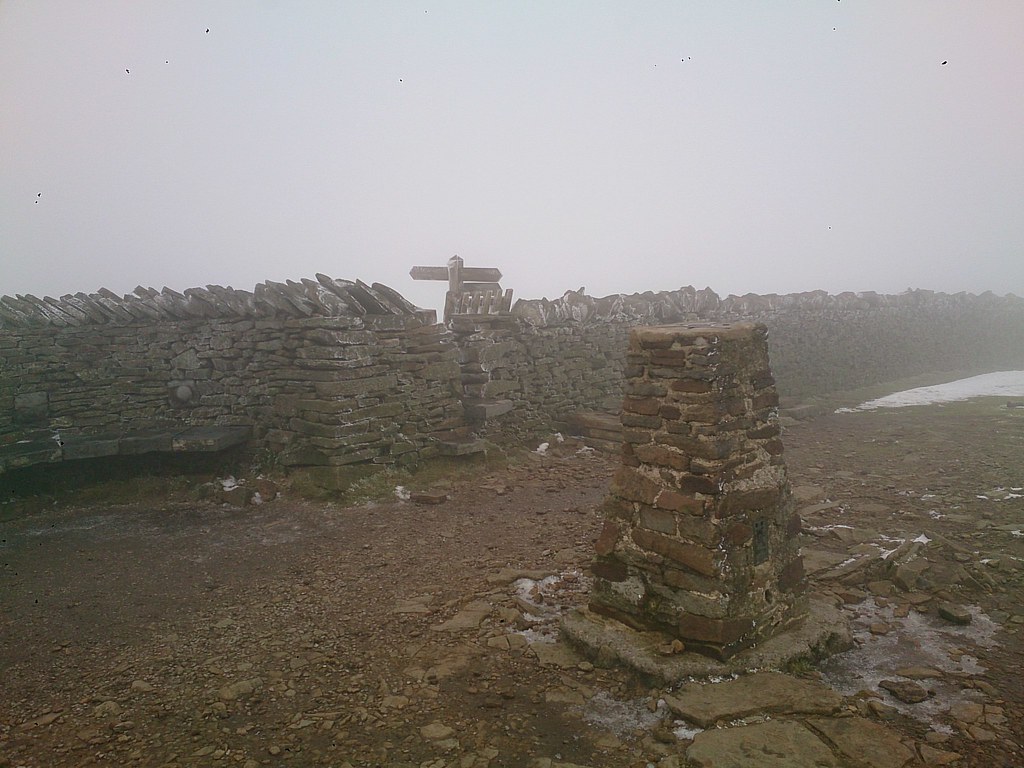 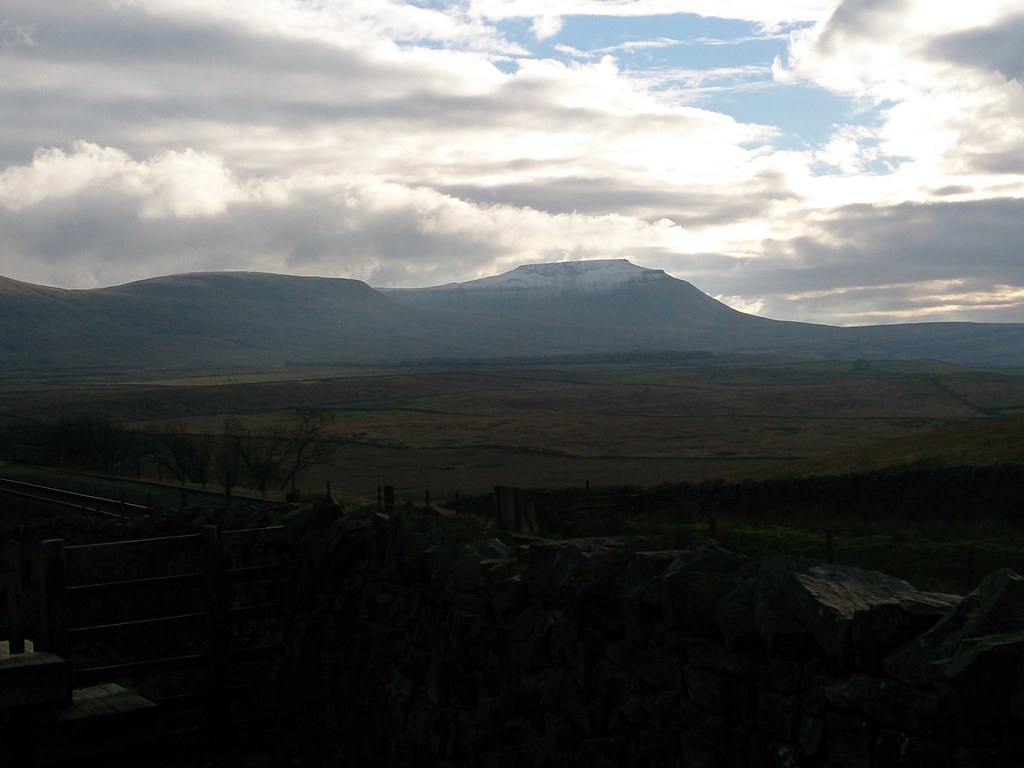 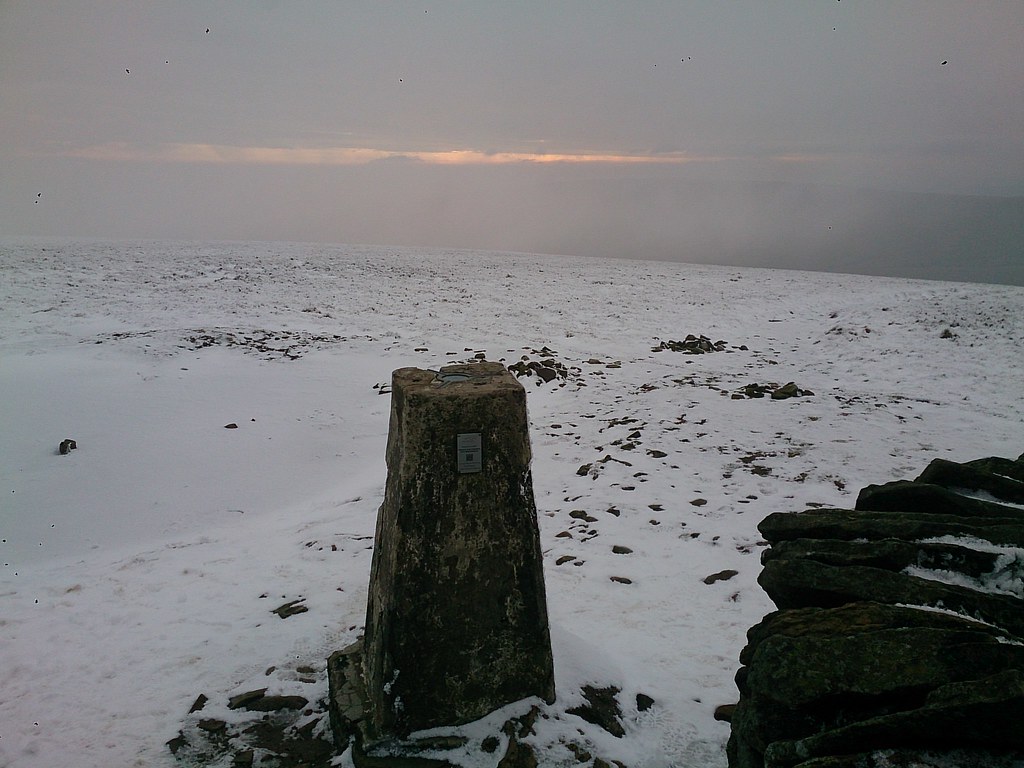 The weather forecast looked OK, so I made a last minute decision to go around the Yorkshire 3 Peaks for the second time in 5 days yesterday.

Some may question this behaviour as obsessive, or compulsive.  They may be right!

I did the traditional round – in other words that starting at Horton in Ribblesdale.  I was at the top of Pen-y-ghent in just over an hour.  As with Sunday, the cloud kindly lifted as I reached the top.  It took me four further hours  to reach the summit of Whernside.  There was more rain around today, including one sustained period on this ascent.  But the clouds stayed high.

The wind was as strong as on Sunday (about 20mph) but it seemed warmer.  The weather then just kept on improving.  In a further two and a half hours (including a stop for food on Whernside) I was on the top of Ingleborough.  It was then a pleasant canter back to the start in my regulation time of just under 9 hours.

I feel far less fatigued today than I did on Monday after Sunday’s round, so I take that as a good sign.  That is particularly the case given I did the “longer” option.  As a result of erosion, the official 3 Peaks route no longer follows the original (traditional) route in two places and is, instead, replaced by good paths built so as to withstand the weight of footfall.  This adds around two miles to the route.  Yesterday I did the (now) official route.  On Sunday I followed the traditional route in one of the two places, so saving myself a mile or so.

So that is it for my heavy training as I allow my body to enjoy some recovery before I depart to foreign pastures at the end of next week.

The Yorkshire 3 Peaks walk is becoming one of my staples.  I did it three times during September and October last year in the lead up to my South America trip.

I am in training again.

This was the 10th time I have completed the round but the first where I have started from Ribblehead with its grand viaduct that carries the Settle-Carlisle railway line.  Our summer has been pretty non-existent to date.  Today was no exception with the tops covered at first and showers whipping through on the cold (and fairly strong) wind.  The weather improved throughout the day with the clouds lifting and breaking but only allowed me to strip down to my base layer top on descending the final summit of Whernside – any warmth in the sun being negated by the wind.

I did a pleasing sub-9 hour round, though that is nothing to brag about given the record.  Being contrary I did the route in a clockwise direction to get the long trek between Whernside and Pen-y-ghent out of the way early on.  As ever, notwithstanding the weather, there were quite a few others undertaking the challenge.