You are here: Home / Blog / Into the land of the headhunters (Part 1)

A rather dramatic title to this blog, and perhaps slightly unfair too.  But this and the following three blogs are my story of a visit I made to Papua New Guinea in August 2014 to climb Mount Giluwe.  Papua New Guinea forms the eastern part of the island of New Guinea which lies to the north of Australia.  The western part of the island forms a part of Indonesia.  The island sits on the Australian tectonic plate. So it forms a part of what is known as Australasia with Australia and most of New Zealand as well.  It is also on the Pacific Ring of Fire, so has a share of volcanoes.

Papua New Guinea became independent in 1975 having been administered from and by Australia for 60 years and before that by German and British administrations.  The country is part of the Commonwealth with the Queen as head of state.  It is said to be one of the least explored parts of the world and the most mountainous country in the world. But it is also one of the most culturally diverse.

Because of lack of communications (impenetrable rainforest covers most of the country) society developed into a huge number of tribal communities with over 800 languages.  Often, interaction between tribes comprises solely of violent disputes of land boundaries.  In the past the consequence of being captured or killed was that you found yourself in the pot.  Yes, cannibalism was rife!

So the country has gained a certain reputation.  Whilst it is probably true to say that the headhunting culture has largely disappeared, violence does still erupt from time to time whether this be the night time robberies in the capital of Port Moresby or the blocking of roads and demands for tolls (or your possessions) that can occur anywhere.

So it was with a degree of trepidation that I decided to organise a trip there.  Unsurprisingly there are no UK operators that do this.  More surprisingly there are not that many Australian ones that do.  Those that do, organise trips to the tourist hotspots in parts of the country that I was not looking to visit.  I did find one company. However the mark-up they wanted for their services was more than I was prepared to pay.

As a result I ended up making arrangements with a local operator myself.  Why Papua New Guinea and why August 2014?  Well to deal with the latter part of the question first, I was then going to be on a family holiday in Australia then so at least Papua New Guinea was relatively close.  As for the first part, well isn’t that obvious?  I do tend to write about my hill and mountain going experiences. So there was a volcano there that I wanted to climb. That volcano was Mount Giluwe, the highest volcano in Australasia/Oceania!  More of that anon.

I have been intending to write something about this trip for a while.  But in this first instalment I am not going to focus on mountains.

In Papua New Guinea I had one of the most intense, albeit short, and wonderful experiences of my life.  Let me introduce you to Grace.

Grace sent me this picture by WhatsApp a few days back.  Grace is 16. When I met her she was shy to start with.  Actually, her English was quite good – particularly as I was about only the third white face she had ever met.  But she opened up a little in the time I was with her and her confidence grew.

So she is a teenager with a mobile phone and access to modern apps.  Well yes, but she is also the daughter of a subsistence farmer who supplements his income by guiding people up his local mountain – in other words, Mount Giluwe.  Like about 80% of the population of Papua New Guinea, Grace, her father (Gedion), her mother (Lilly), her three brothers (Yarex, Rendy and Roro) and her aunt (Racheal) all of whom I met, live in a small community of subsistence farmers.

Here is the happy family.

Their staple food is the sweet potato.  In Papua New Guinea the sweet potato comes in various colours – orange, yellow, red, white and beige.  In the fields behind the village, potatoes grow in large earth mounds.  When the family can afford it they will buy a chicken.  Alternatively the village will organise a hunt in the forest where tree kangaroos, cuscus (a marsupial) and birds can be found.  This seems to be the only source of protein in the diet.

The family live in a hut in a clearing.  There are two other huts there.  A narrow and often muddy track leads down to a motorable track (I hesitate to call it a road) on the other side of which is the remainder of the village.  The village is called Mailka.  The nearest larger habitation is Tabul where there is a secondary school.

In the village beyond the immediate cultivated land but before the forest, grasses are encouraged.  The grass is used for bedding, covering roofs and for weaving (including a curtain that could be drawn across the entrance).  Hidden in the corner of the nearest field is a toilet within a small wooden structure – a facility I did not visit.

The hut itself has four walls, a roof and earthen floor and a small entrance.  Near the centre of the floor there is a fire where sweet potatoes slowly bake on a metal tray.  The atmosphere inside is throat chokingly smoky.  On the left as you enter, against one of the longer sides of the hut, there are four bunk beds which the family share.  Husband and wife have one with their baby boy.  The two lads have one.  Grace has her own – for the moment.  I perch on the edge of one of the beds as there is no other furniture.

I had the opportunity to share some time with the family whilst waiting for my transport back to the Lodge at which I was based.  Racheal’s English was pretty good.  Gedion’s was patchy.  He even admitted to me at one point that because I was talking too fast for him to understand me he just nodded at me in agreement!  After then I was careful to slow down the pace of my speech.

Although the family’s life is relatively spartan, there is a primary school which is a 40 minute walk away.  It took almost as long to drive such is the state of the track to their village.  The secondary school in Tabul is a bit further away.

In the couple of hours I spent with them, we swapped stories of our lifestyles.  I am not sure that they understood everything I said even allowing for the language barrier.  My audience was inquisitive.  They had heard of Australia and knew roughly where it was.  They had heard of Russia as they had recently had some custom from there.  And England.  But they had no idea where in the world it was (or Russia).  I scratched an outline of the globe on their floor and tried to show them where I had come from.  But they had no idea of scale.

I got my camera out and showed them photos on the small screen on the back of the camera.  The kids crowded around me as I showed them first family pictures, then pictures of Jet.  They liked Jet.  Grace was fascinated with my photos of Kirsty who is just a couple of years older than her.

I next showed them photos of my trip so far to Australia.  This included some of the animals I had seen.  This one in particular caused some amusement. 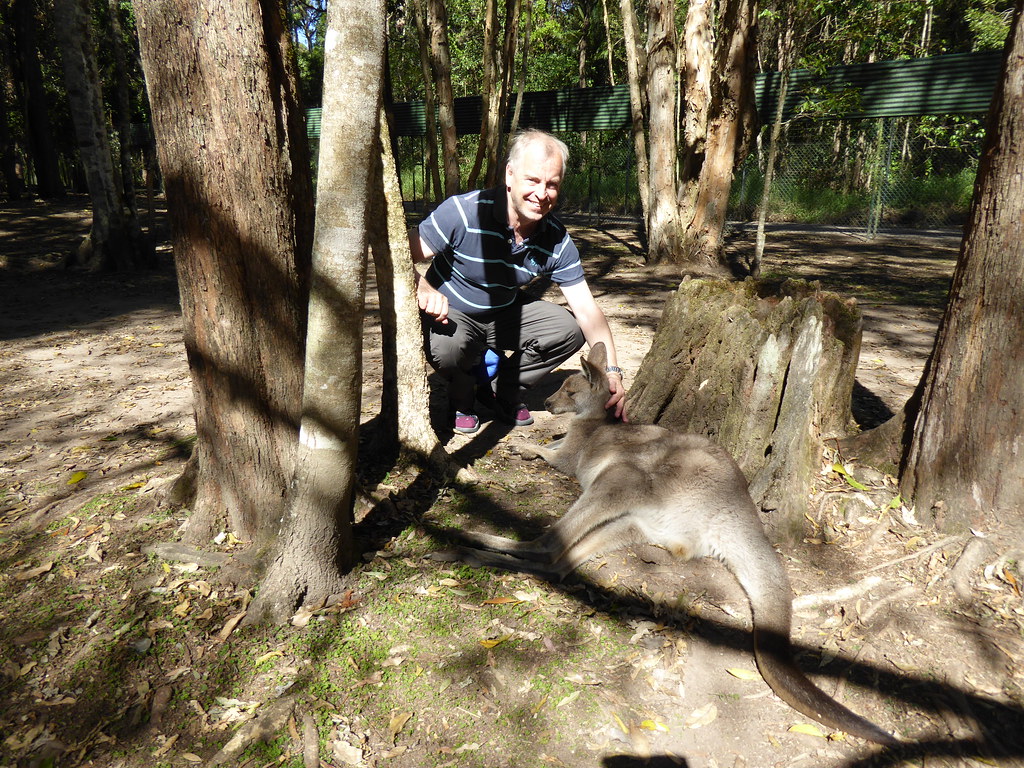 They thought that this was a picture of me showing of a kill that I had made!  I imagine that this kangaroo could have fed the family for a couple of days.  It was tempting to confirm the presumption they had made, but the idea of zoos/wildlife parks caused them some bemusement.

I heard more about their school and church.  A feature of the country is the large number of churches of many denominations – no doubt a consequence of missionary activity.  The churches run a lot of the educational facilities in the country.  I was offered and accepted one of their baked sweet potatoes.

Eventually it was then time for me to leave.  The whole family came to see me off.  It was a fascinating experience to start to get to know Gedion’s family.  A wonderful couple of hours.