Today’s trip comprised naked list ticking.  Two “Marilyns” neither having previously encountered the soles of my feet – with a morning walk and an afternoon walk.

What is a Marilyn I might sense some say?  Well it is any hill in the British Isles with a prominence of at least 150m (approx. 500ft).  In other words, in order to reach any higher hill, you have to descend at least 150m to reach that higher hill whichever way you choose to go.

Now that is explained, on to Great Shunner Fell or, as my spell checker insists on calling it, Great Stunner Fell.  For the Yorkshire Dales, it is in fact a bit of a stunner.  It is 716m (2,349ft) with a prominence of almost 300m.  So it has fine views all around and, unusually for a Dales hill is a bit “pointy”.

It lies between Wensleydale to the south and Swaledale to the north.  To its east is a road over Buttertubs Pass, most recently famous as being one of the climbs used by the Tour de France when Le Grand Depart occurred in Yorkshire last year.

Jet and I were going to follow the Pennine Way from Hardraw to the south.  This is not the shortest or quickest route up but is probably the most aesthetically pleasing.  Parking can be found by the side of the road at the western exit to the village and the route then immediately follows a lovely enclosed bridleway that rushes you up to 330m.  Here the path (which is still a bridleway) emerges onto broad open ground and a sign that informs you that the largest (heather and Black Grouse) regeneration project in the country is going on.

A little beyond there a finger post points the way. 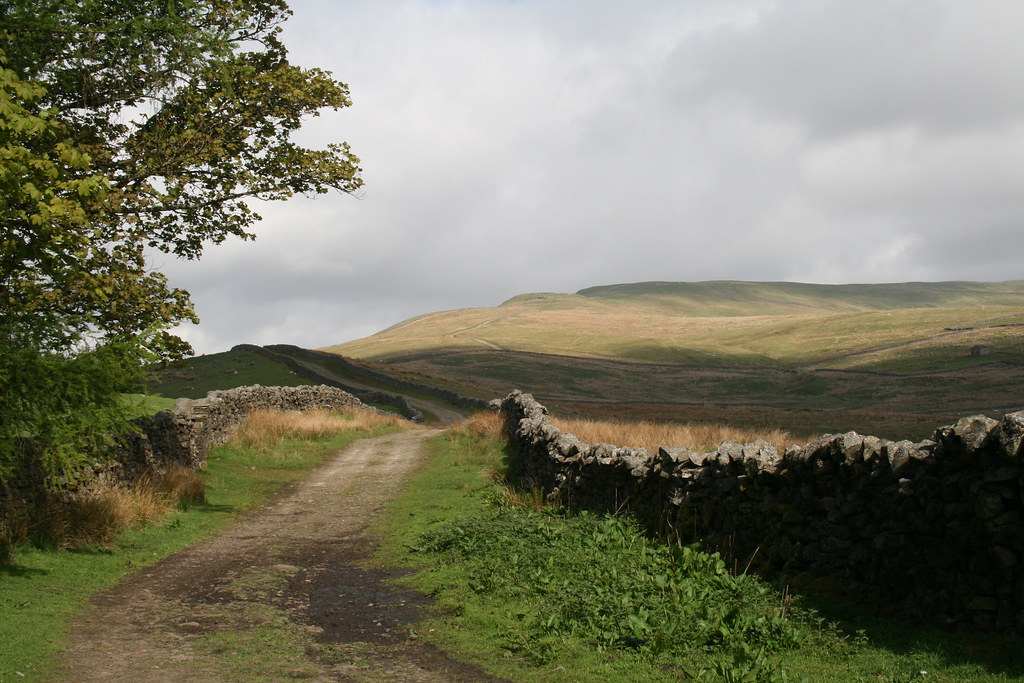 From there the path ceases to be suitable for vehicles but the gradient eases.  You are now on to typical Dales’ moorland.  Being the Pennine Way, the way on is obvious. 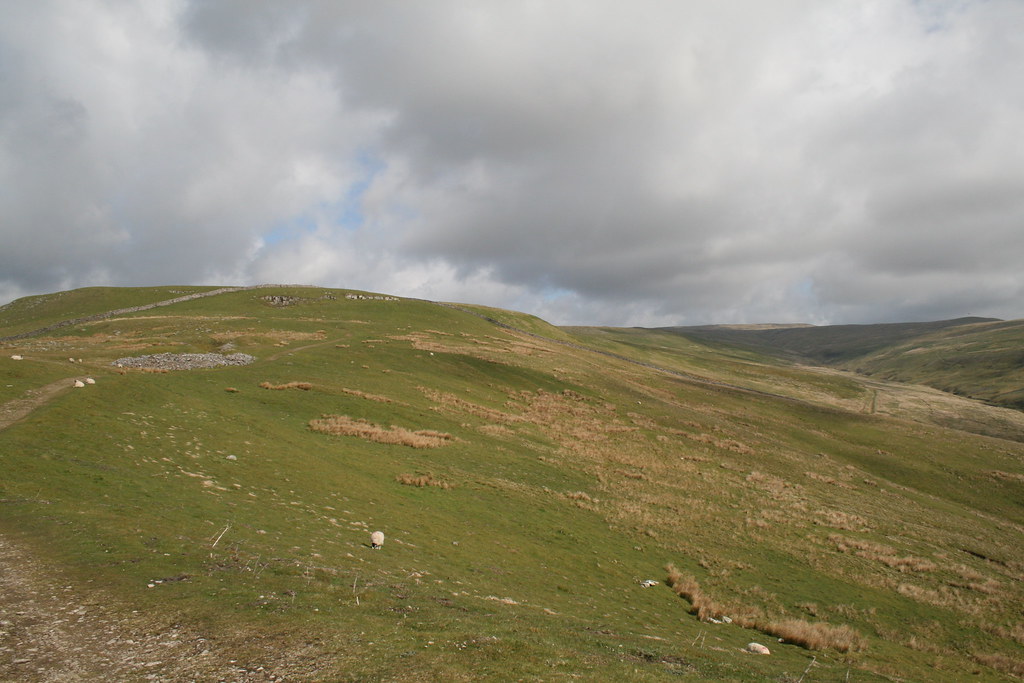 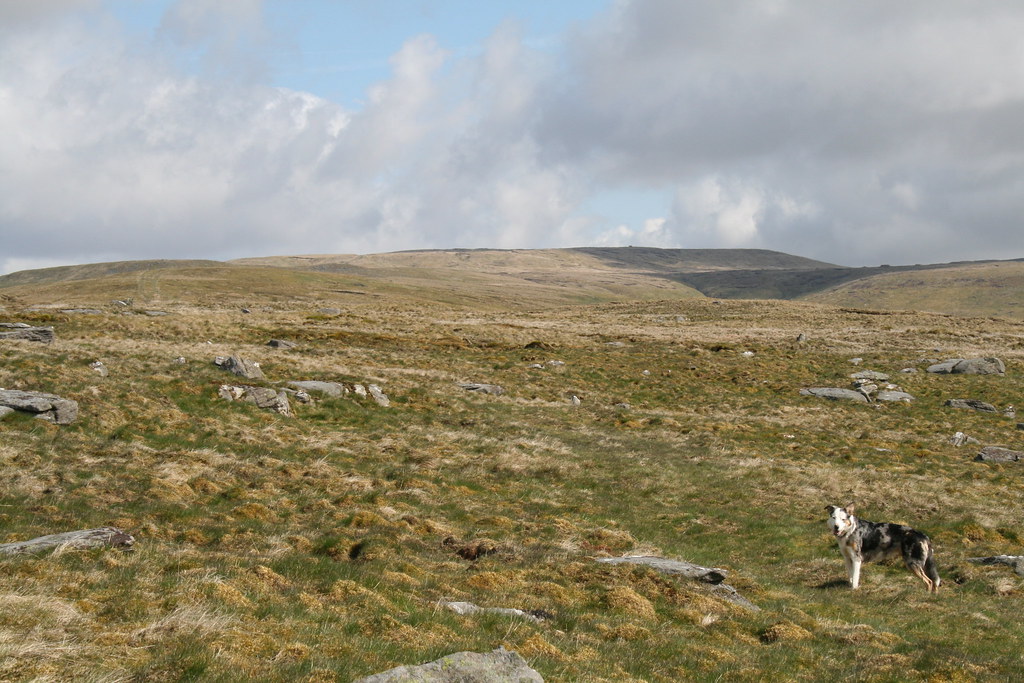 Indeed the weight of feet necessitates some protective action.  Unfortunately the flagstones are necessary, but they do take away some of the feeling of remoteness.  They are discontinuous but they are present much of the way to the summit.  As ever Jet was keen to find whatever water he could. 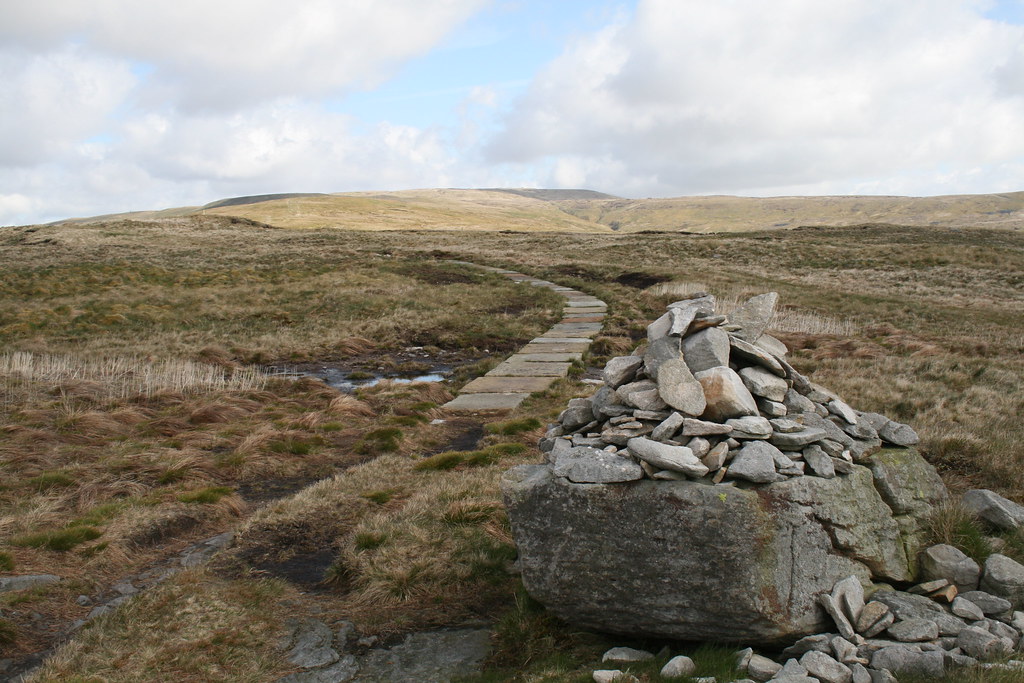 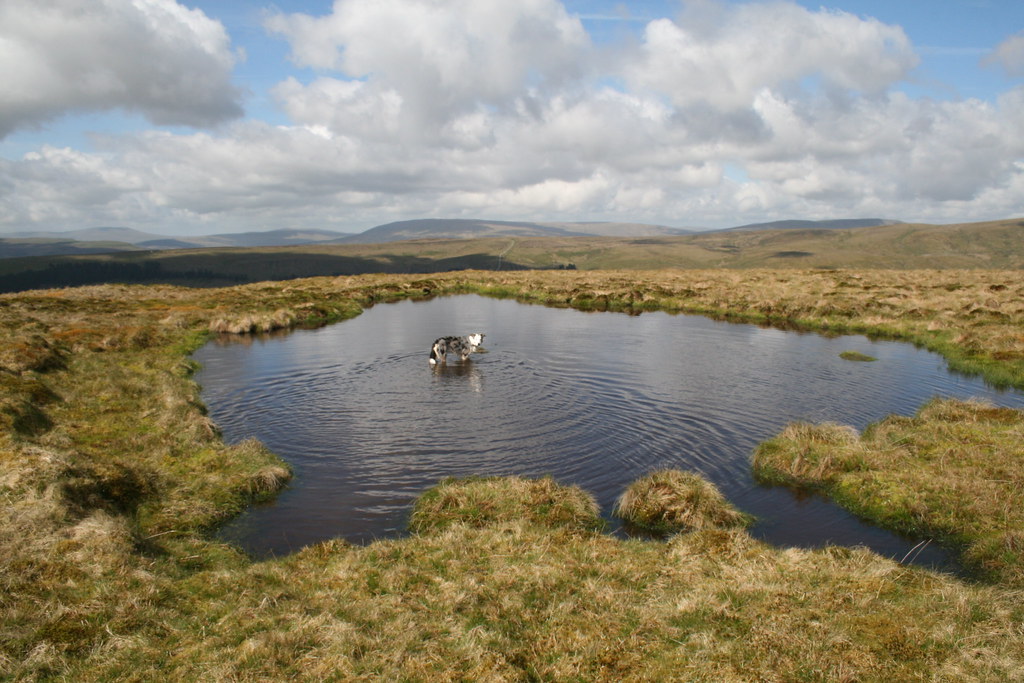 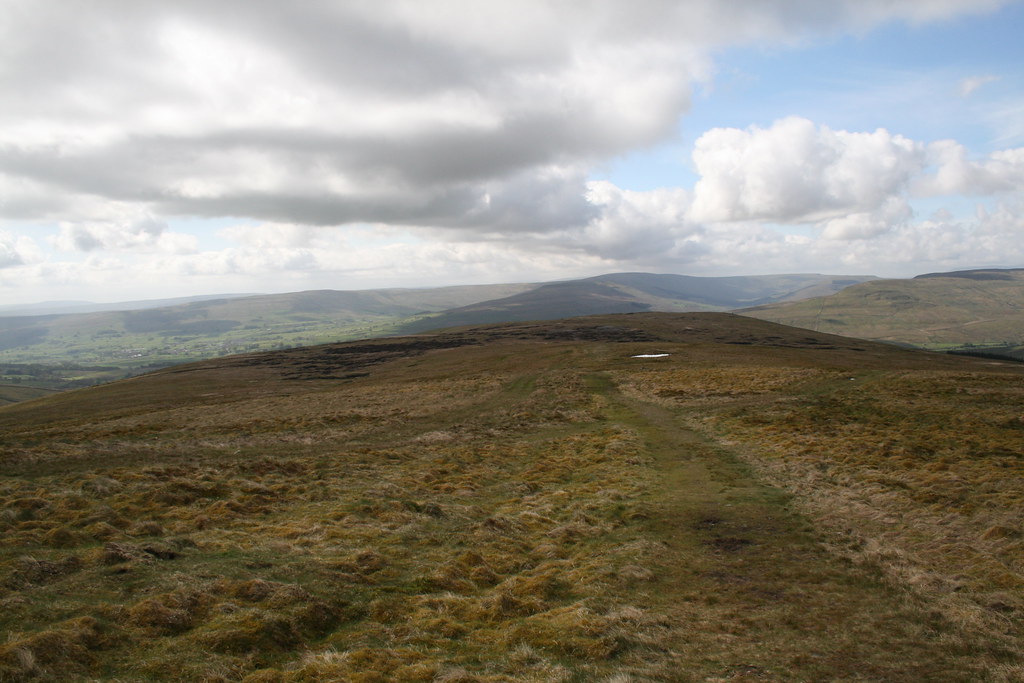 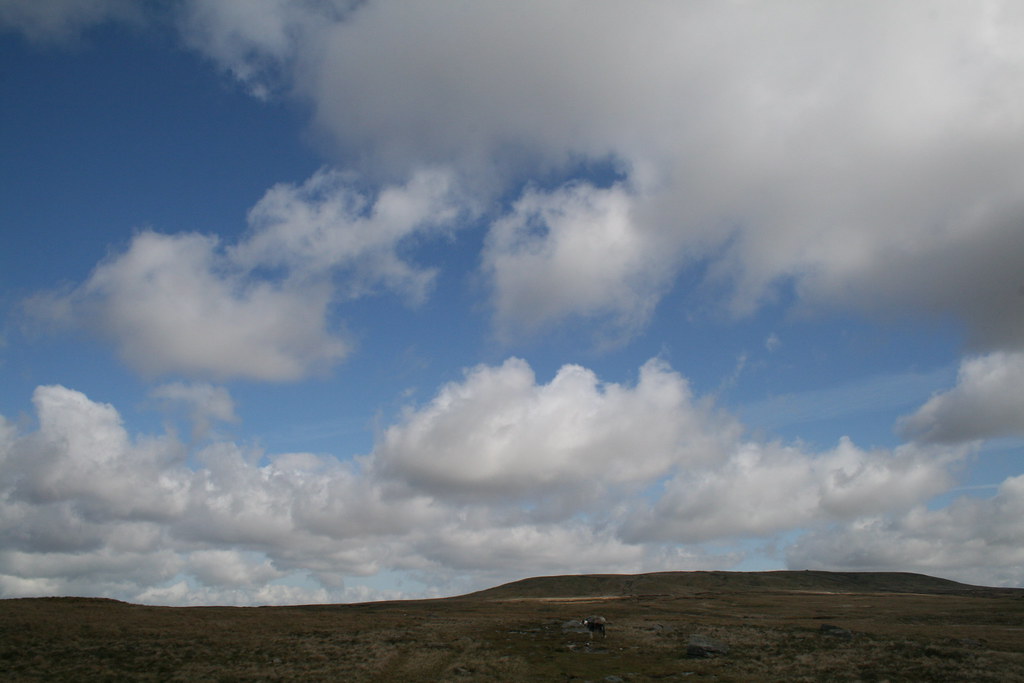 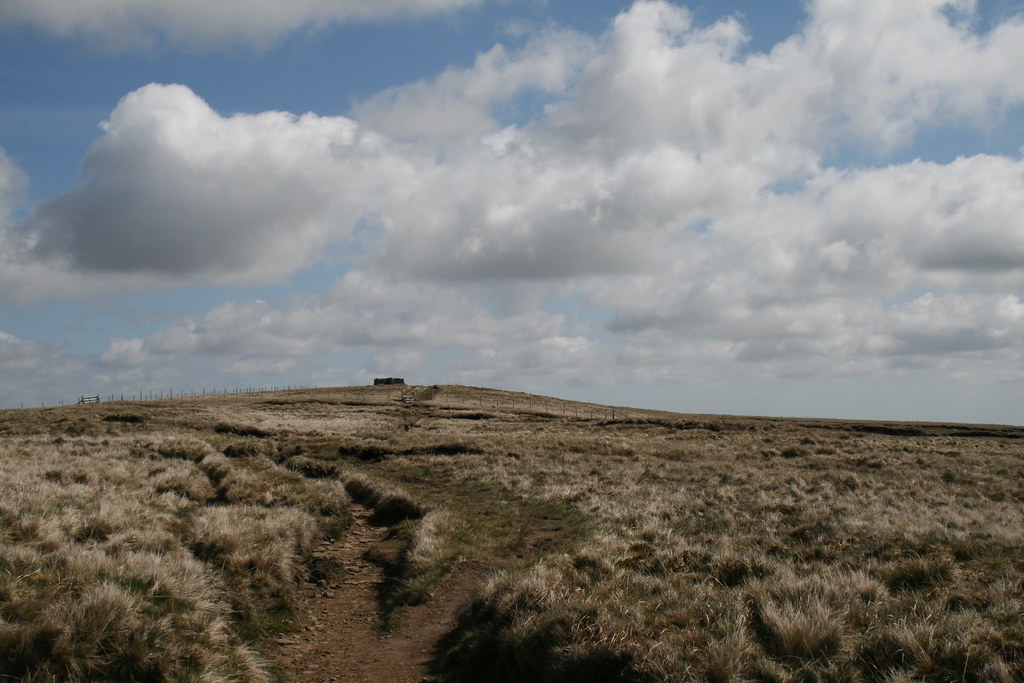 It is about 4 miles to the summit.  We had been up and out early so did not see anyone else on the ascent.  We had the top to ourselves.  It was a little after 9.30am.  Here are some summit pics. 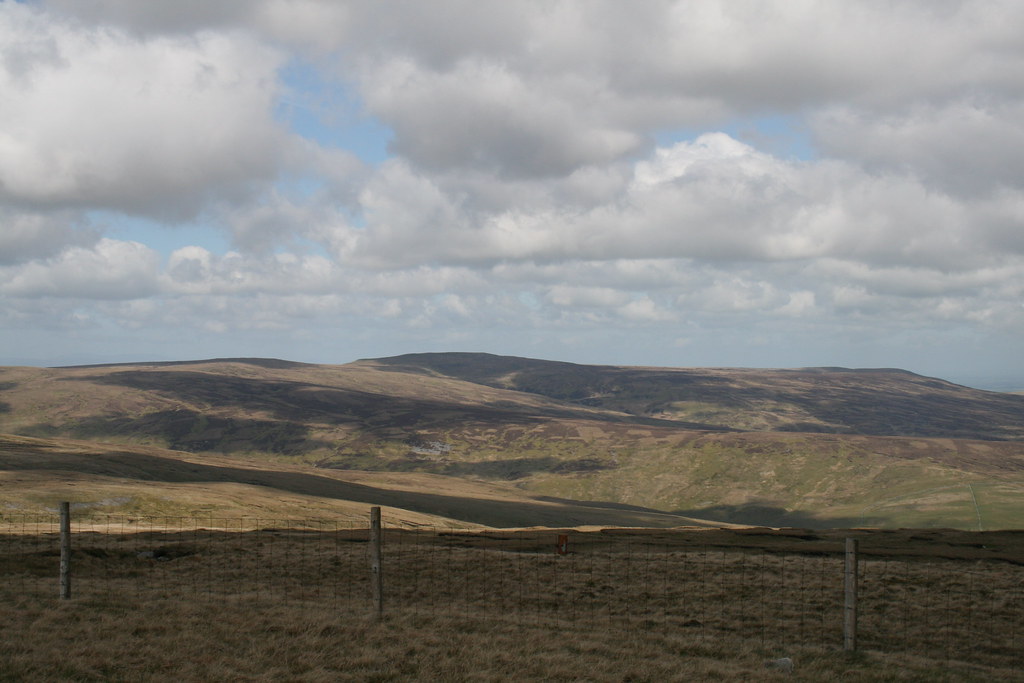 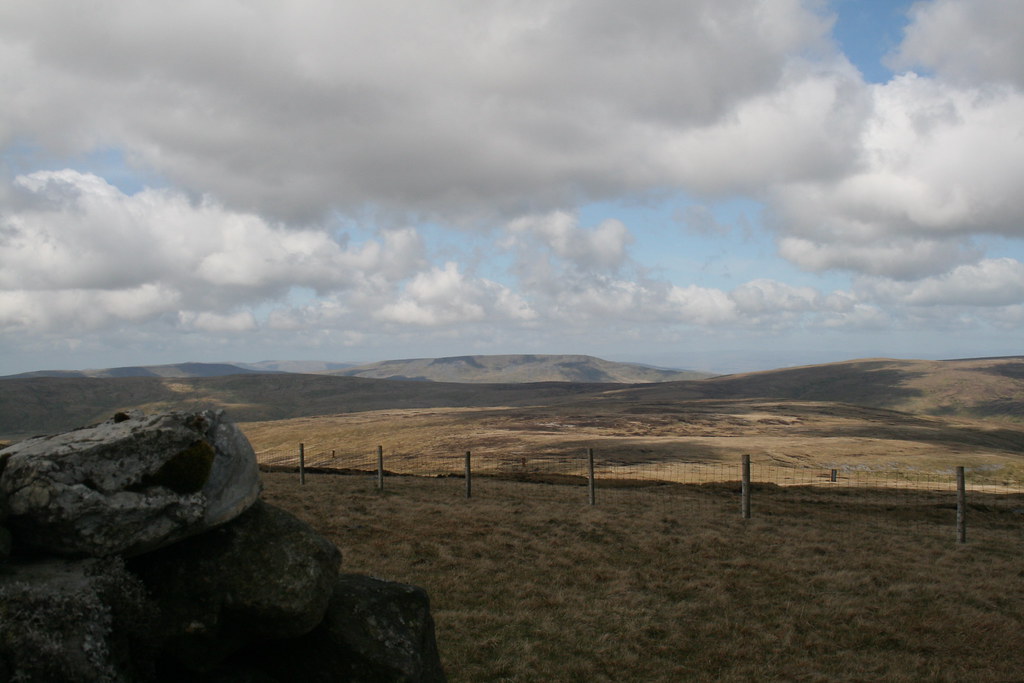 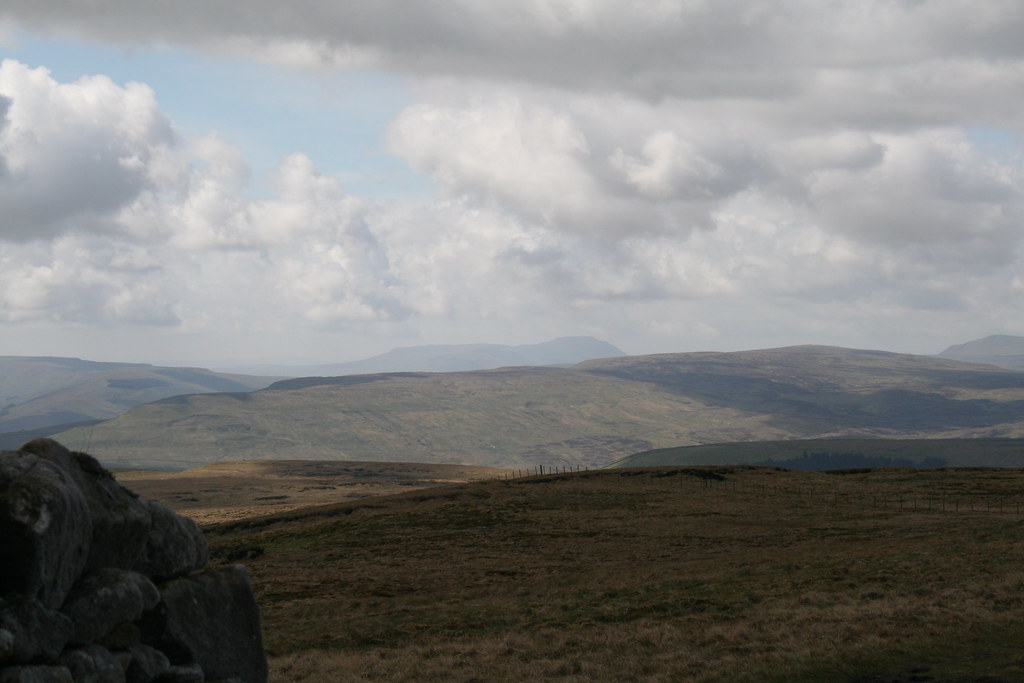 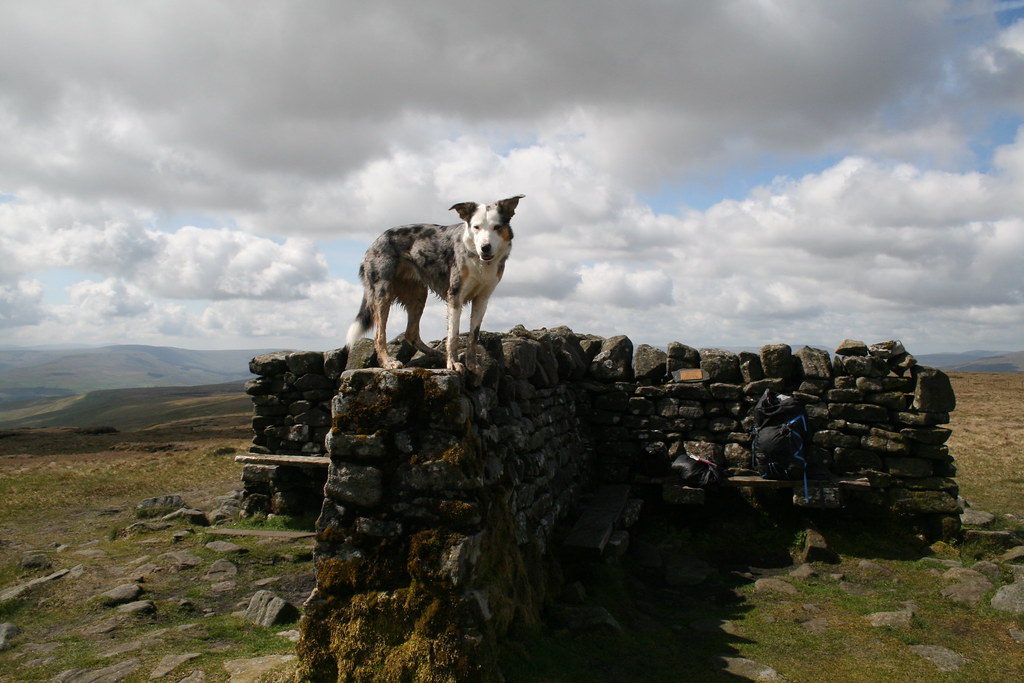 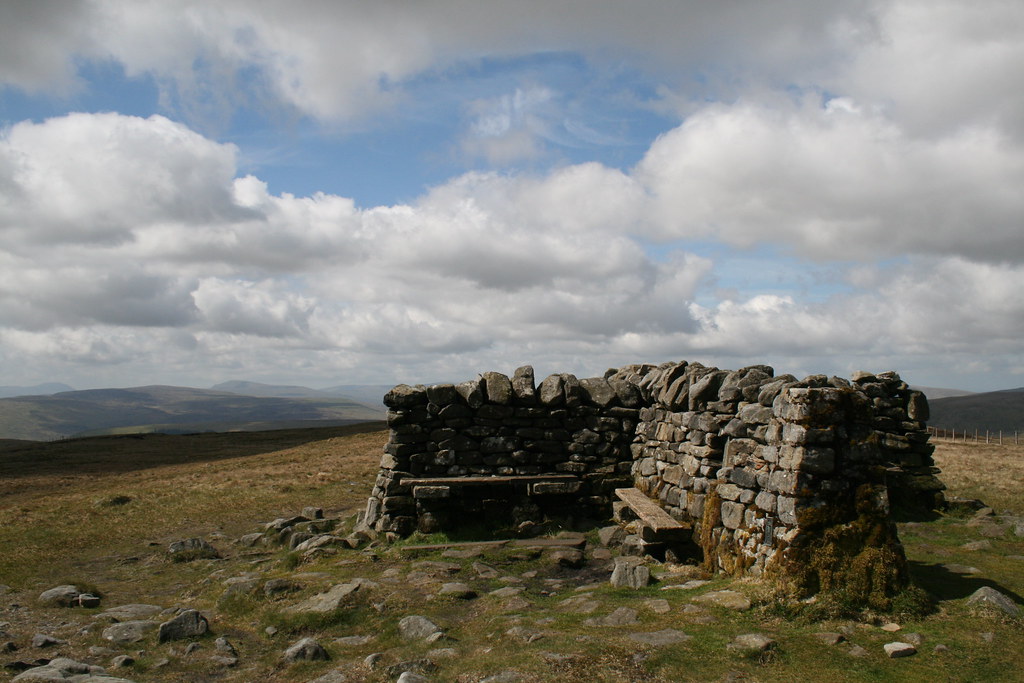 We returned the same way, though with a slight diversion to one of the beacons that fringe the hill.  This one looked down into lonely Cotterdale.  The OS map shows at least 8 of them. 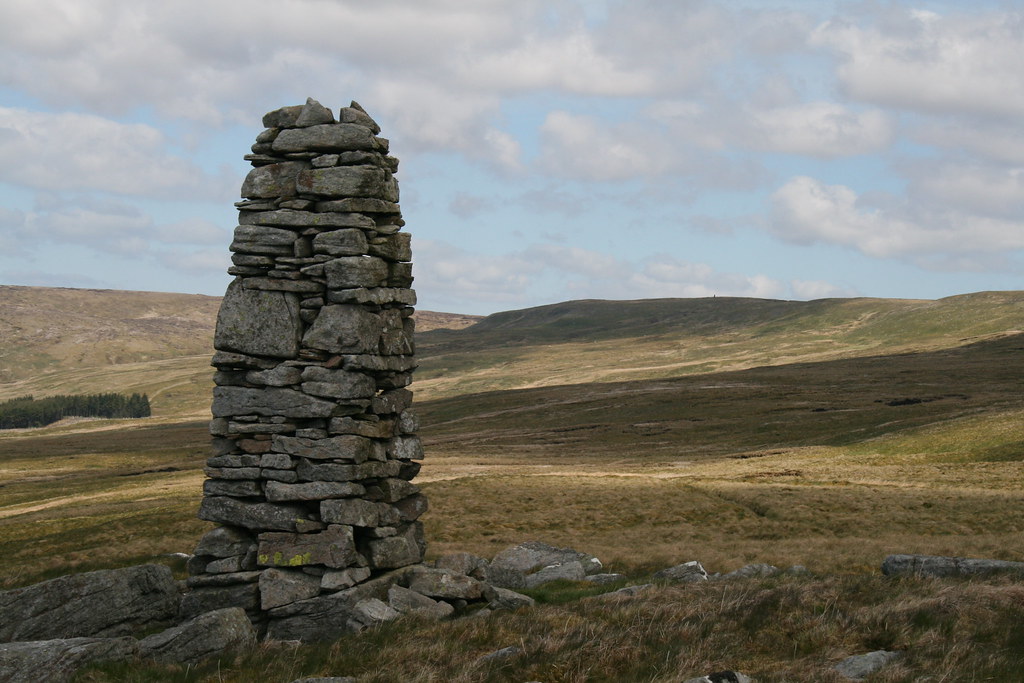 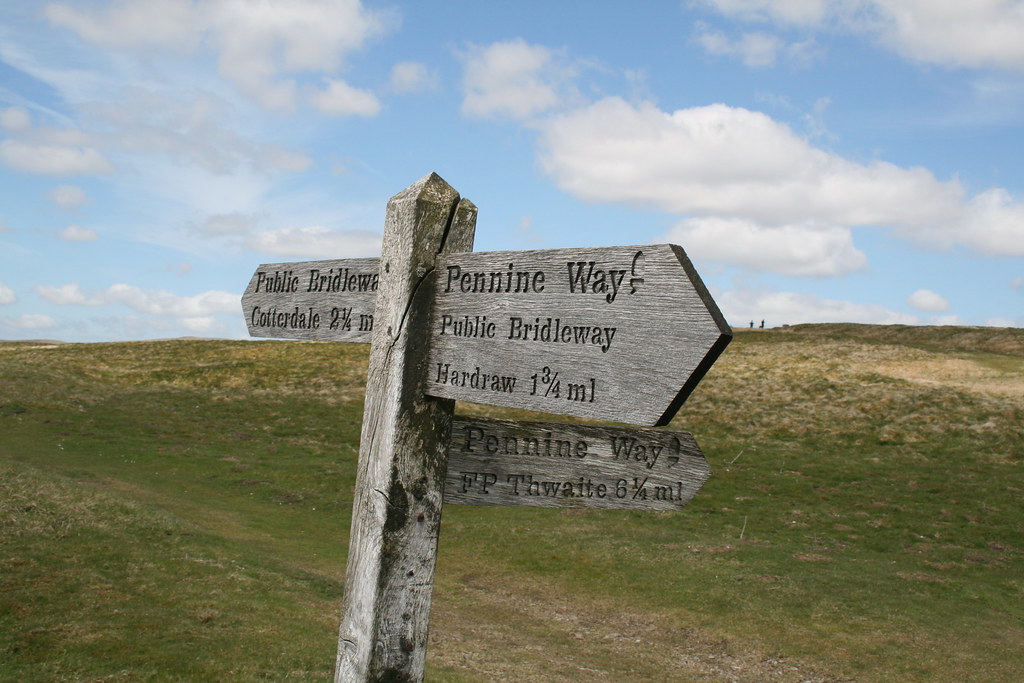 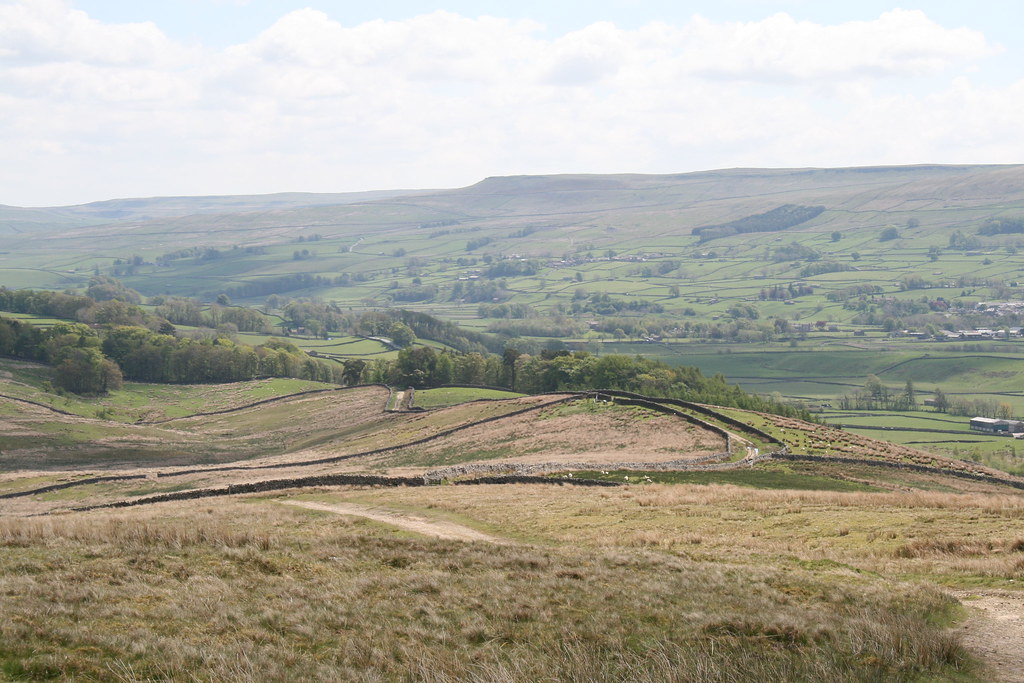 After a brief sit down there, we returned back down to the walled bridleway and quickly on to the car.

So on to Baugh Fell.  Looked at on the OS map, this hill does not look all that appealing – a big wet looking plateau. Pathless and surrounded by miles of tussocky moorland.  I chose to approach it from near Grisedale to the east.

There was a parking spot near a highpoint in the minor road.  We left the car and dropped down to the stream crossing under the road which (when followed) would provide a useful feature to follow up to the heights.  To start the way was very rough, and wet.  As the slope increased, it became easier under foot and less wet.  As the plateau was reached the first of the tarns that dot the upper reaches of the hill was reached.  Before then a set of scruffy cairns on Grisedale Pike was passed. 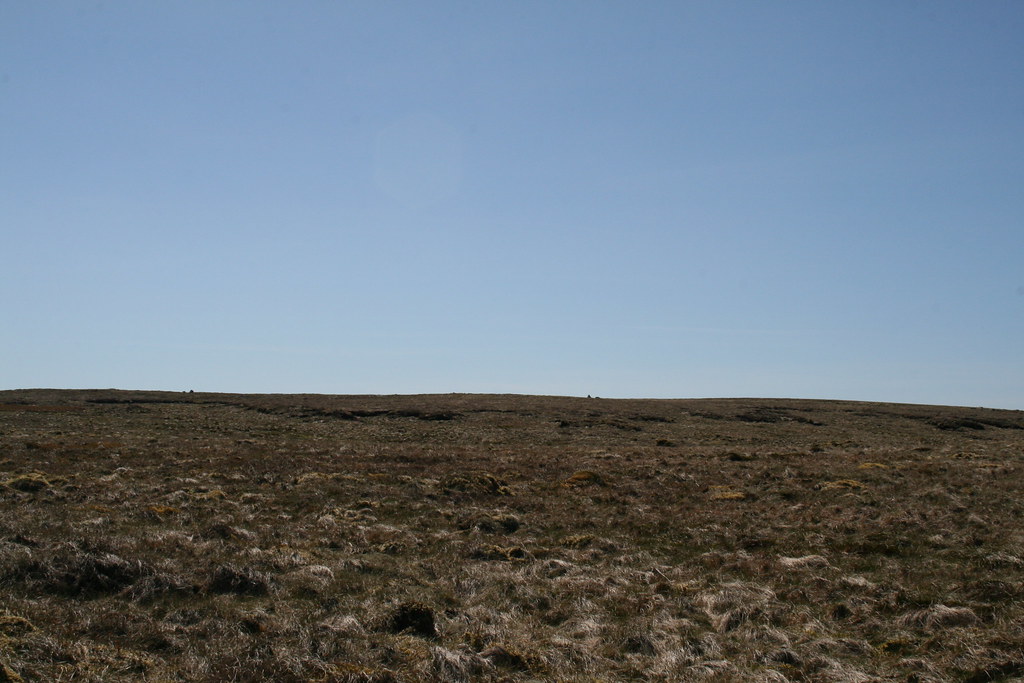 The eastern part of the hill is called Tarn Hill.  The tarn itself was bright blue, reflecting the sky.  The ground around it was very marshy.  Water seeped over my boots.  Jet was determined to have a swim, so he did! 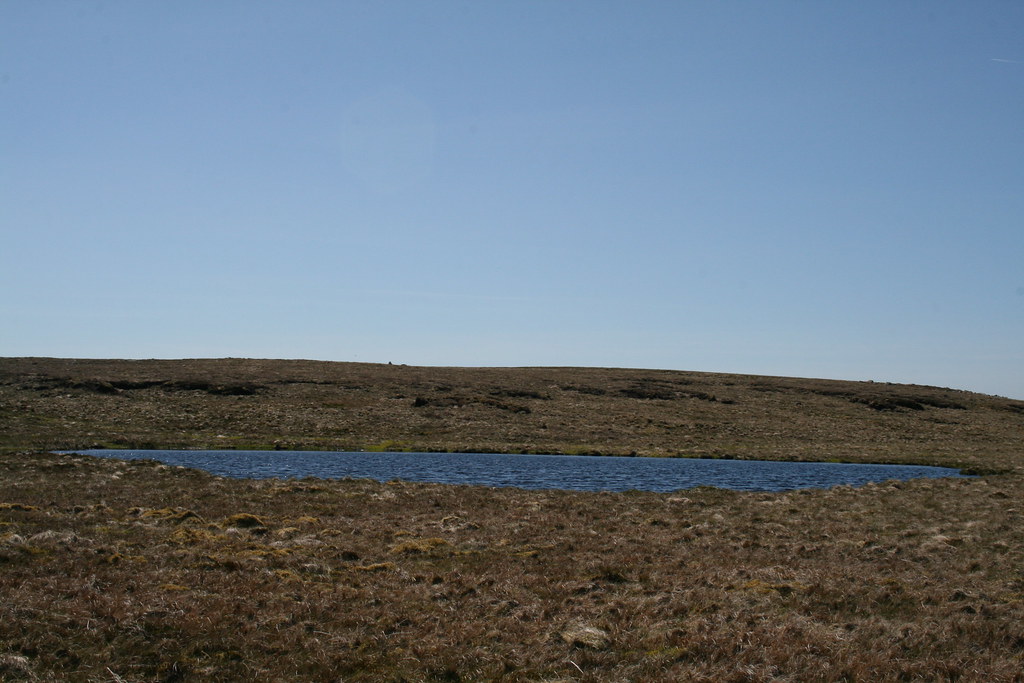 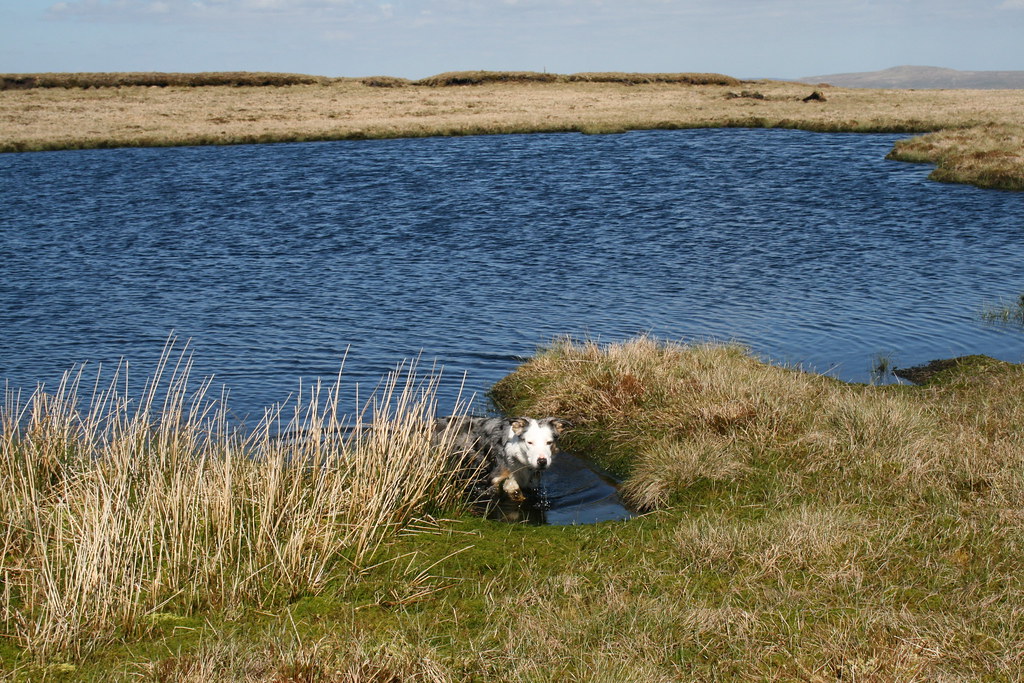 Shortly beyond there my route converged with a wall that I had been following 150m to my left.  I then walked by the wall in a south westerly direction.  The top is not market by any feature.  The wall has a kink in it before it continues west towards the west top a kilometre or so away.  The west top has a trig point in it but is 2 metres lower.  It is said to have the better view, but those views from the higher top were expansive – especially to Wild Boar Fell to the north (with more blue tarns peppering the middle distance) and the Yorkshire Three Peaks to the south.

Great Shunner Fell stood out to the east.  I could see the cairns on the rim of Wild Boar Fell where I had been just a couple of weeks before. 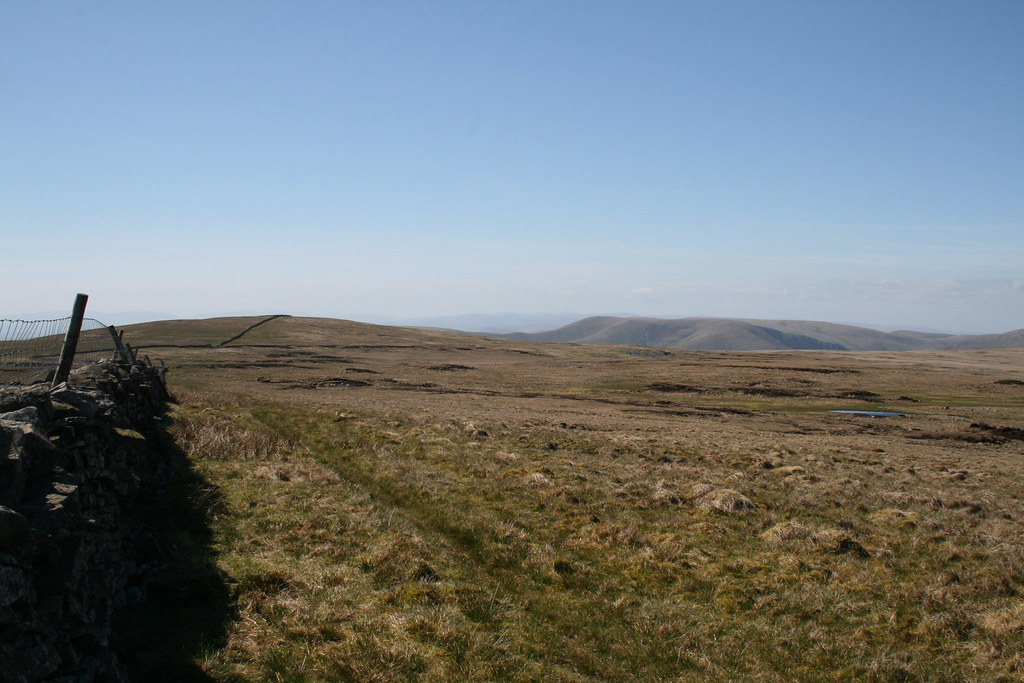 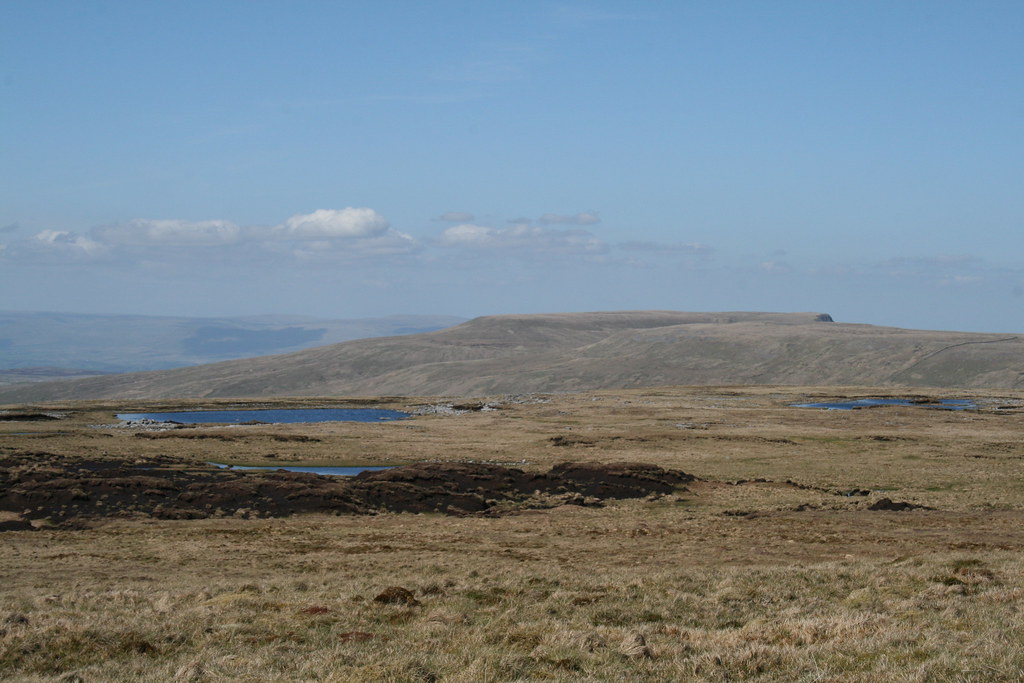 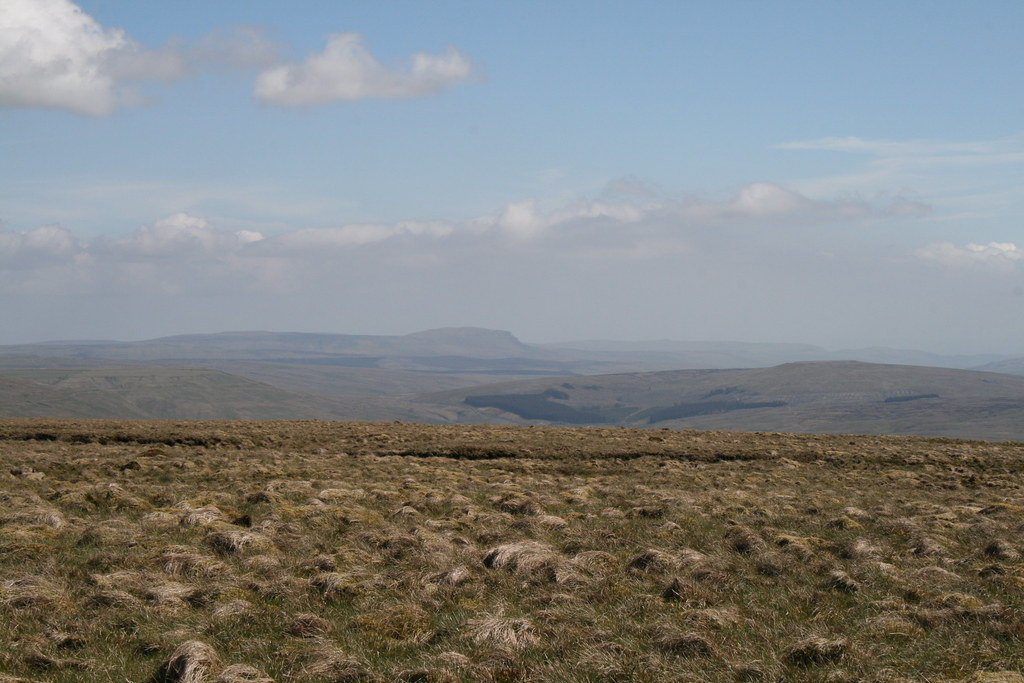 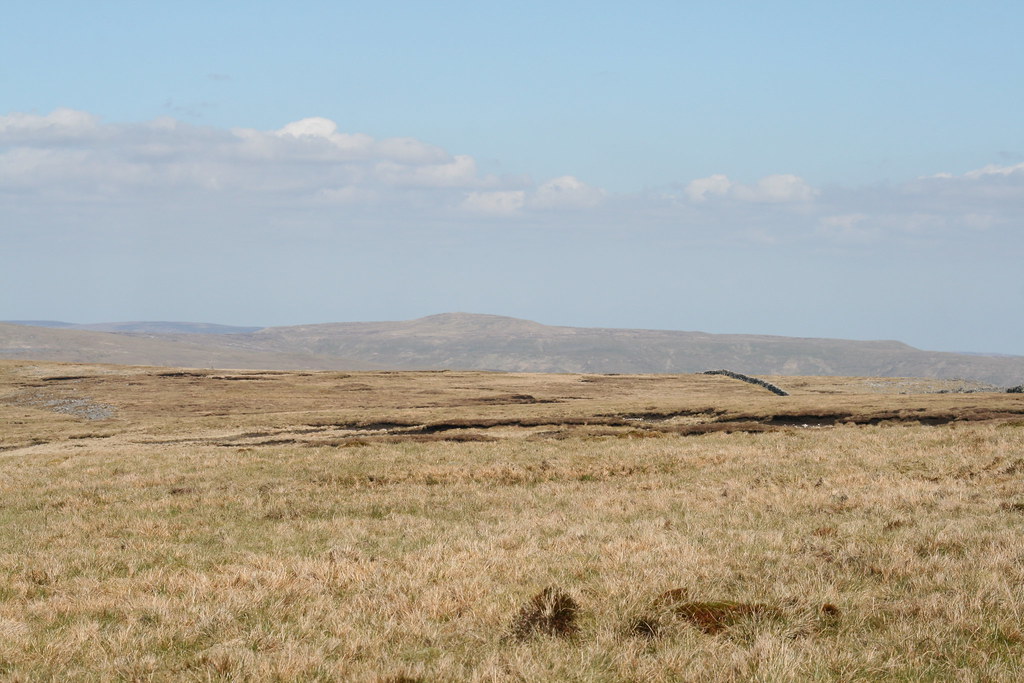 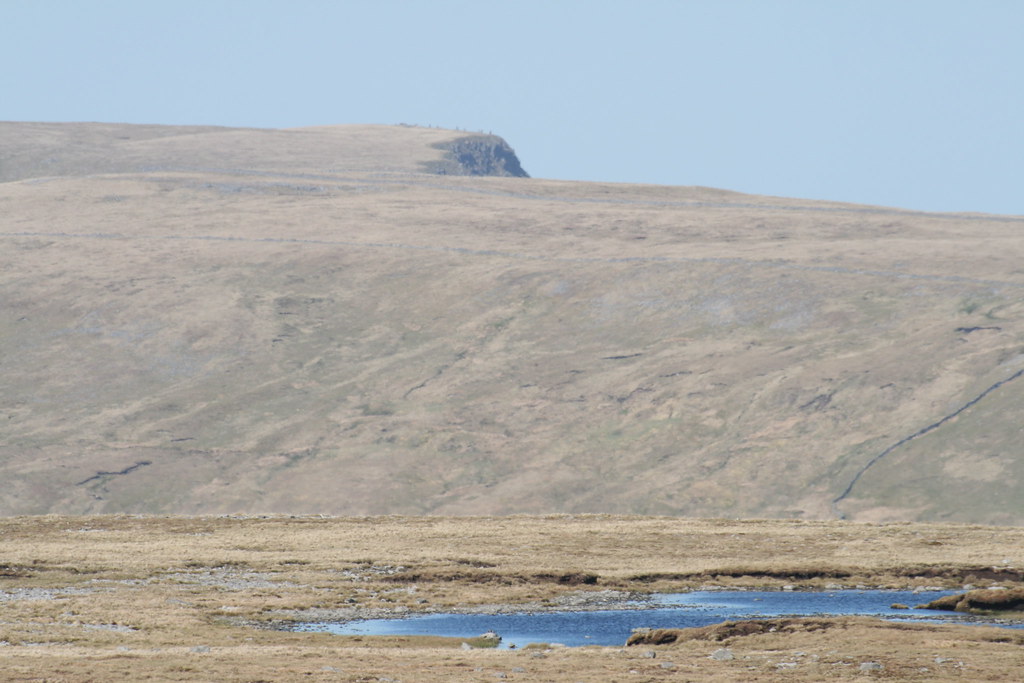 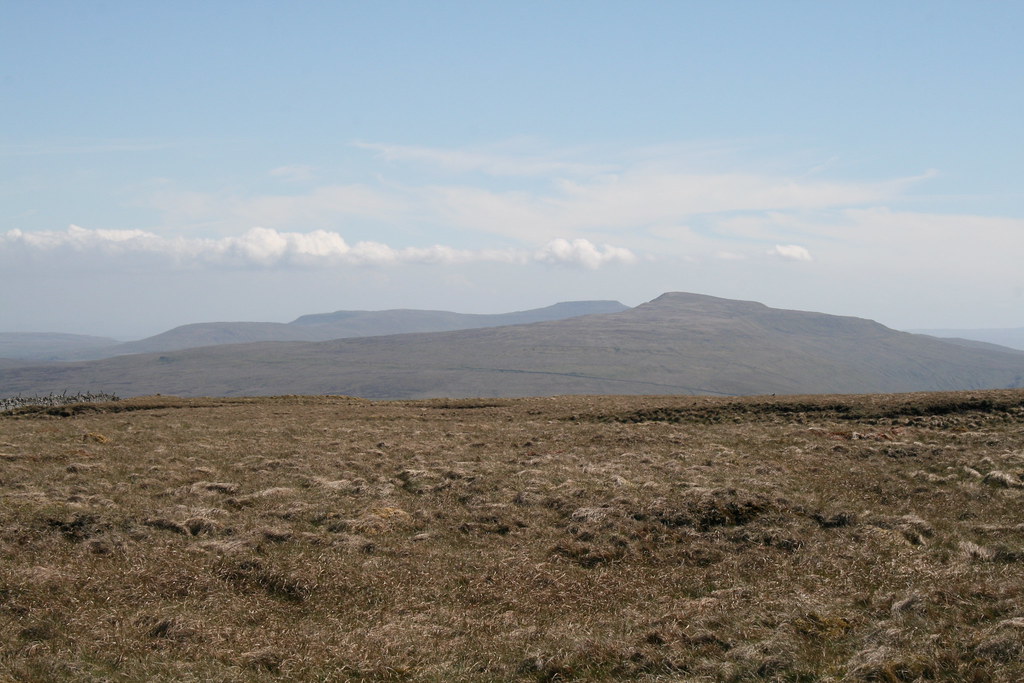 Whilst this hill is hardly the most shapely, it has the feel of space and distant views, fairly typical of parts of the Yorkshire Dales.  An ascent from the north-west might see more features and be a little more challenging.  But on this day of blue skies and blue tarns, I was content with my outing.