We were settled in our tent but the wind rattled it all night pausing only occasionally for breath before resuming its assault. Derek had no sleep and I did little better. Not the best preparation for the day to come. We did not need the 2am wake up call. We were ready to go well before then, assuming Miriam considered it safe to do so. The excitement of the night came with a mouse that scurried by within a couple of whiskers’ lengths of my nose. Derek was not convinced of its existence until we found, let us say, the evidence in one of our bowls. Yuk!

We were off on the dot of 3am leaving our tents behind. The wind had died a bit and, as on our Izta night, the moon and stars cast light strong enough to cast shadows. The path for a while was actually pleasant and soon we had to shed a layer. Progress was felt rather than seen. There was an icy gulley where we had to put on crampons and harness, in many a place we had to use our hands to scramble up easy rocky stretches.

Altitude was gained steadily overall. Looking back I could see the lights of other climbers way below. We had a couple of rest stops and reached the glacier whilst it was still dark. It was 5.30am. I drank half a litre of water. We roped up here, Miriam leading, Derek next and then me. The hour or so before dawn was especially cold. We had our down jackets on and my feet remained warm despite just wearing my Scottish winter boots.

At long last a red line appeared to our left. The day was making a belated appearance. To our right there was an unbroken sea of cloud. Soon Pico cast an enormous shadow to the west. La Malinche breached the cloud but was overwhelmed by that shadow. 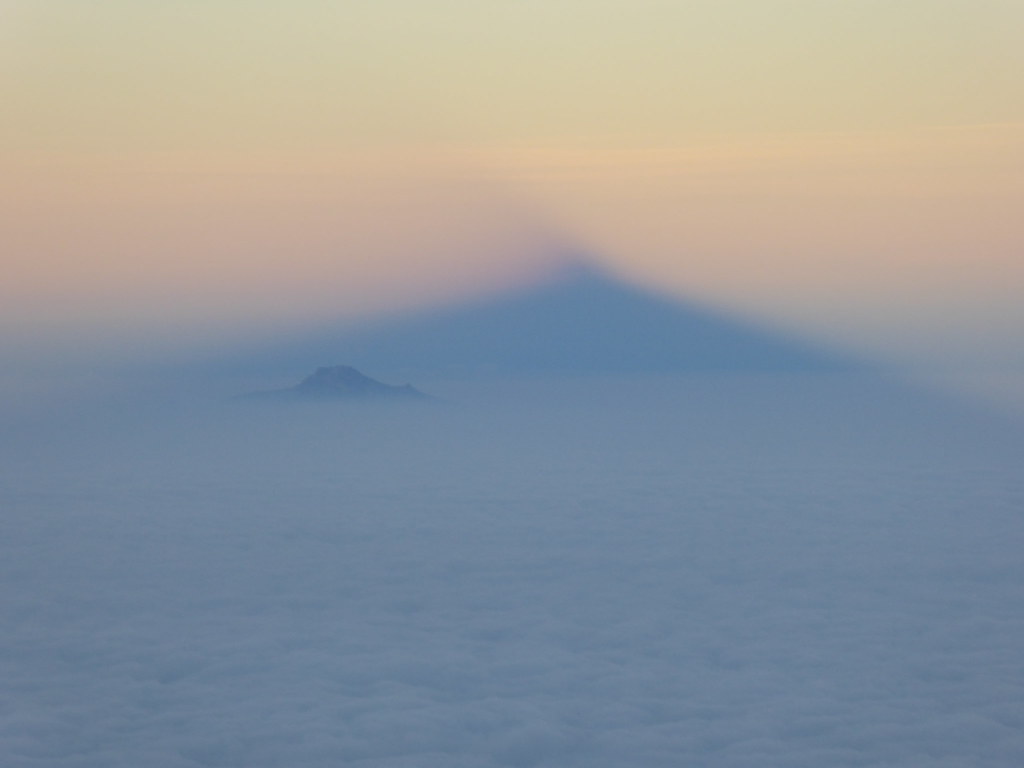 As the sun rose, Popocatapetl and Izta could be seen beyond La Malinche. Below cliffs turned a burning red. Onward and upward we went up the relentless slope. The view up did not seem to change. The worst of the steepness was eased by zig-zagging – perhaps a few too many times, as each switch meant shifting ice axe and rope.

One false summit was passed and the slope continued the same trajectory; zig-zag, zig-zag. This is where the mental will to continue kicks in. But the weather was perfect – sun and light wind – and the snow conditions were equally perfect – crampons biting and no deep snow. There was no excuse not to carry on. Eventually rocks could be seen above. Derek and I wanted shallower zig-zags. Miriam was determined to take the direct route. Being at the bottom end of the rope I could control the pace. So I did! 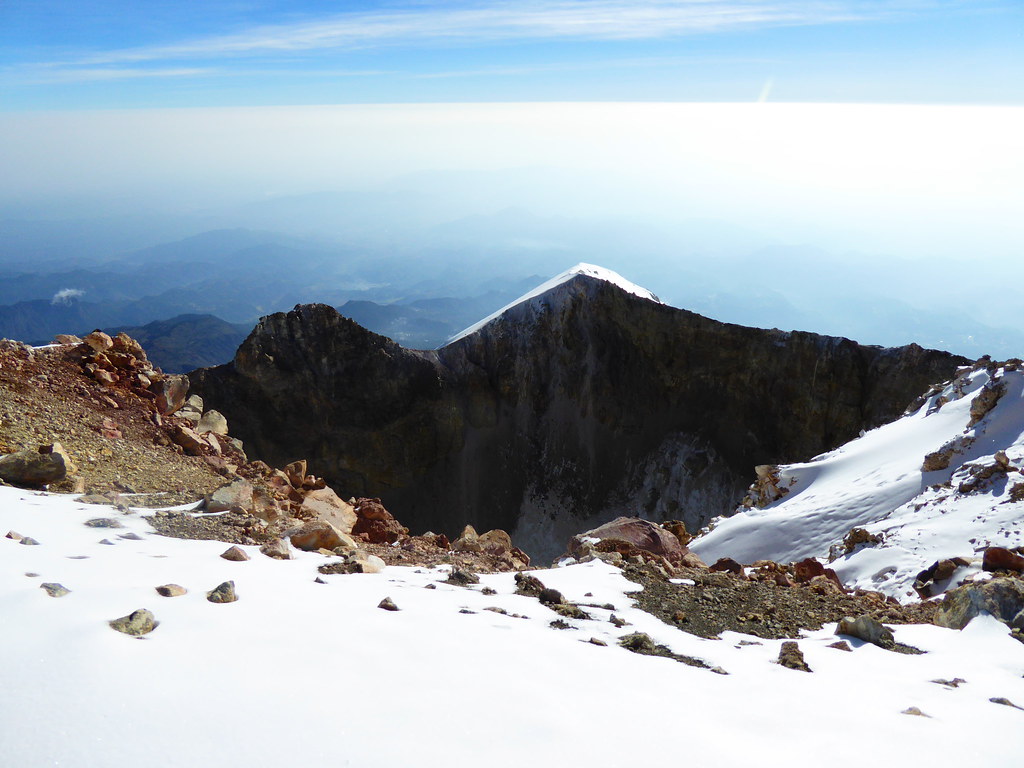 And then we were on the crater rim only about 50 vertical feet from the summit. I peered into the crater. It looked like the jaws of a ferocious monster. I took a quick picture of my rope mates and a couple of minutes later we were on the top of Mexico. It was 8.30am. 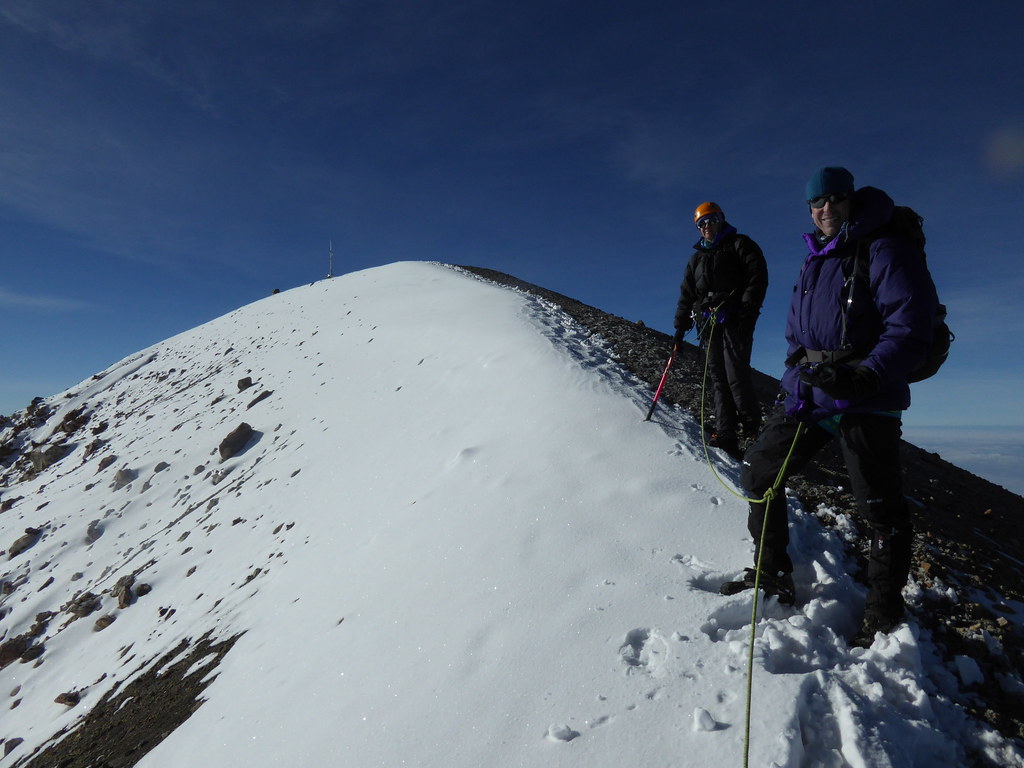 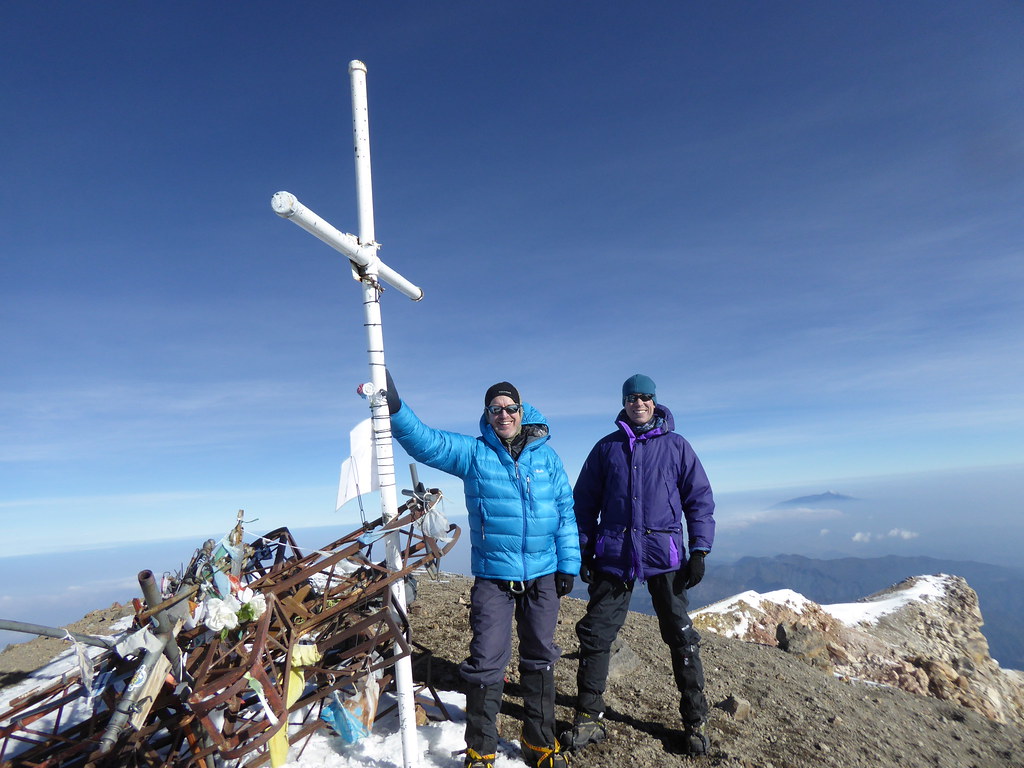 Although cold, the lack of wind made it quite pleasant and we were able to spend over 30 minutes on the summit. Views into the crater were partly limited by the crumbly nature of the rim. Below on a neighbouring mountain was an observatory. Popocatapetl and Izta were visible in the haze. You are supposed to be able to see the Gulf of Mexico from the summit but the clouds below put paid to that. 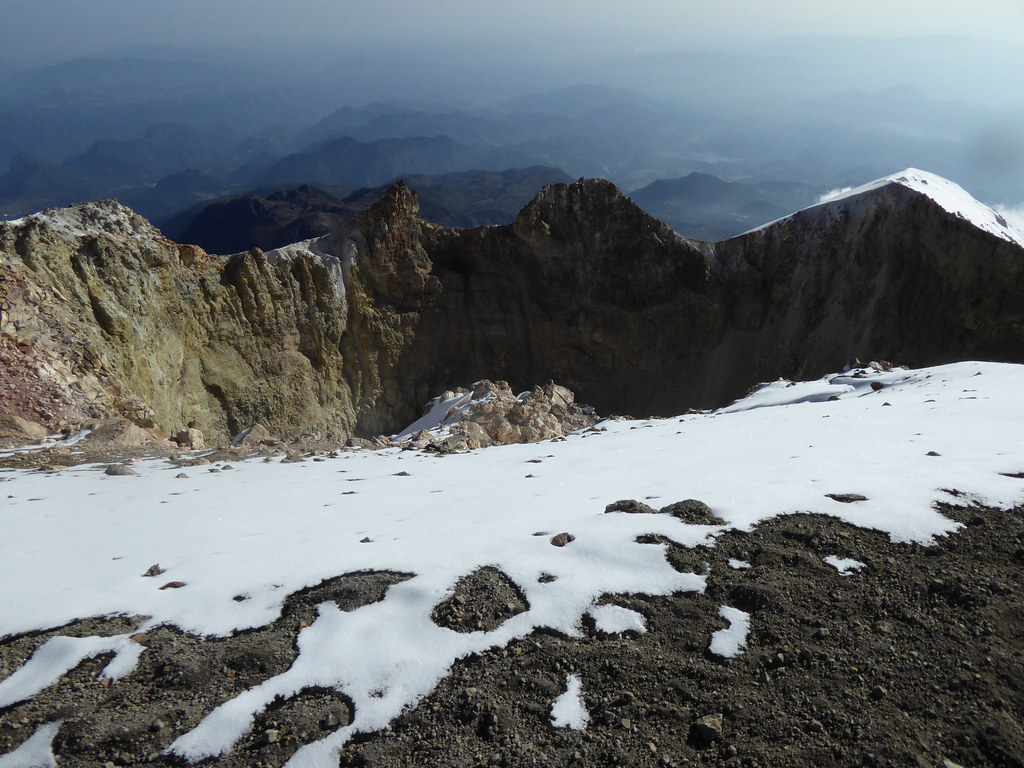 I think it is a privilege to be in places such as the summits of these Mexican mountains. It was tempting to stay longer but we were mindful of the forecast and that we were a long way from Tlachichuca.

So reluctantly I left. I was now in the lead. I followed a series of wide zig-zags. 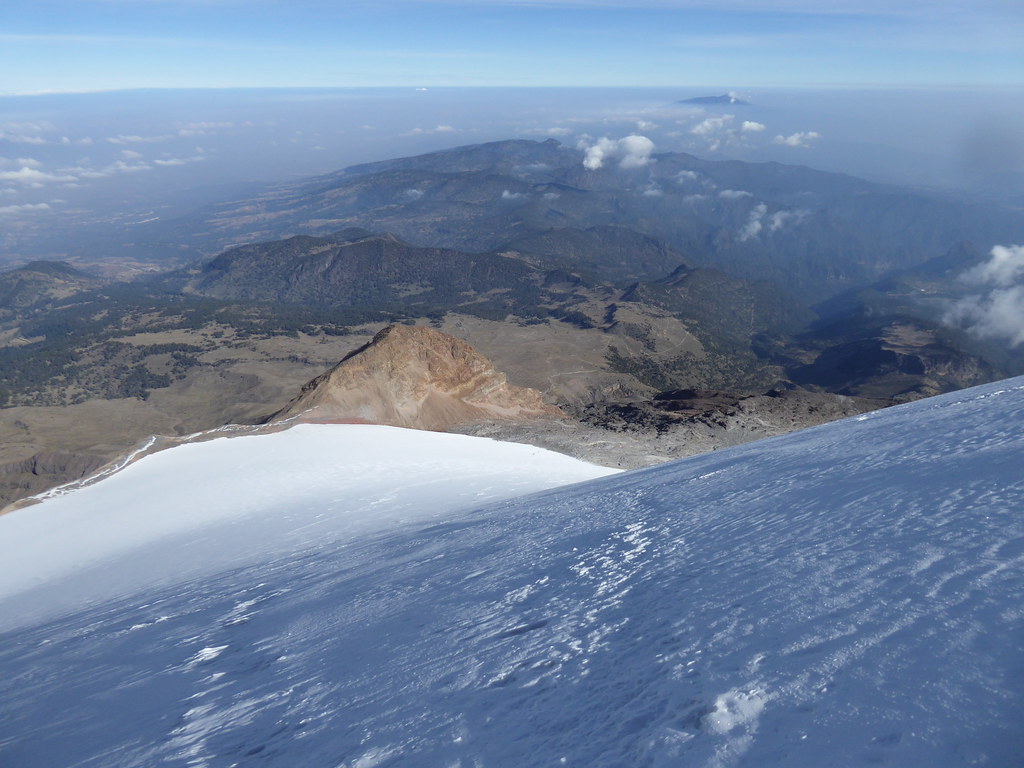 Looking down the glacier

A third of the way down we could see some figures just coming on to the glacier. I steered a course towards them. By the time we reached the first of them they were well spread out. As anticipated they were the four Americans we had seen the day before. They were toiling under the heat of the sun. We stopped to chat with each one to provide encouragement and a realistic minimum time to the summit. They were all from Huntsville, Alabama, somewhere coincidentally I and the rest of the family have been. They had arranged for a lift from the hut at 3pm. No way were they going to summit and be back by then. We learned later that they had made it to the top but did not arrive back at the hut until 7pm.

We were at the bottom of the glacier by 10.30am. Here we were glad to peel off some layers, unrope, remove harnesses and drink, drink, drink. We were now at the level of the top of most of the clouds. Some clouds were also intermittently swirling around the summit. Looking up we could still see the Americans. 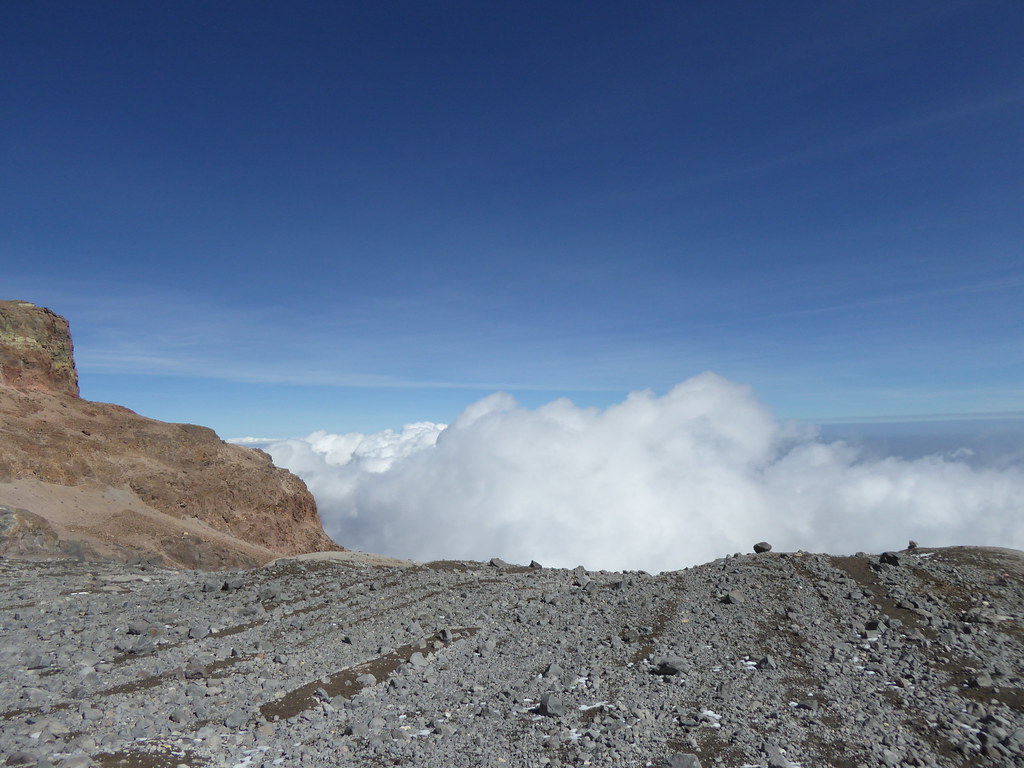 Boiling clouds at the foot of the glacier

After 20 minutes we were ready to move. Whilst going down the snow was a pleasure, if steep, we were now faced with the usual loose terrain found on volcanoes. Here I started slipping behind the others (as well as slipping occasionally on the loose stones). I was tired and a headache was starting to develop. But we were back at the tents before noon and packed up our gear in the swirling murk. 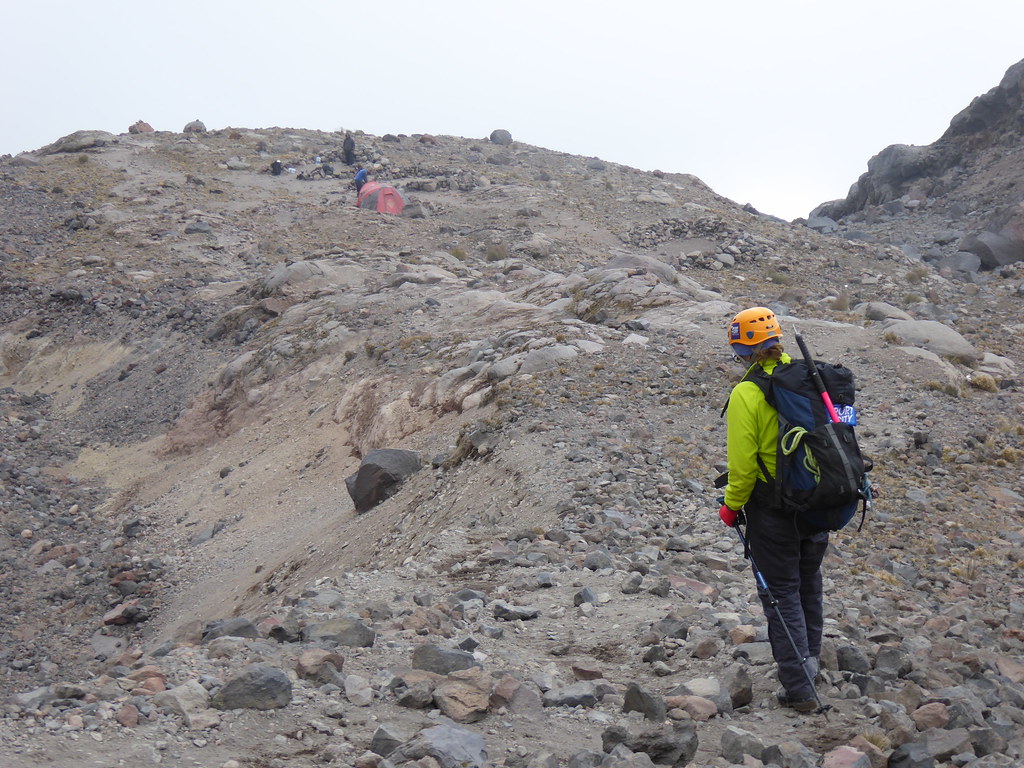 I popped a couple of pills and left a couple of minutes before the others. I was almost half way to the hut before they caught me and we were all back down by 1.15pm. There is not much more to say other than we had the 90 minute roller coaster ride followed by 20 more minutes to Tlachichuca and our accommodation for the night. We never did see a storm though it was a bit gloomy at first the following day.

So that was more or less the end of our Mexican adventure. The following day we went straight to the airport for our flight south. Many thanks to Jagged Globe who made the in-country arrangements and to Miriam Diaz and Ricardo Lugo who ensured a safe and fulfilling experience.