You are here: Home / Blog / Pico de Orizaba – the approach

I had found Izta hard going. My general fitness had been just about OK but the effects of the altitude had been greater than I had bargained for. Despite keeping well hydrated and popping pills, a combination of painkillers and Diamox, I was a little down. Pico de Orizaba is at a different scale again. It’s 400m (1,300ft) higher than Izta. Our capacity indicated that at these altitudes we could manage perhaps 250m height gain per hour. As with Izta we would have to put in an intermediate camp.

Pico de Orizaba (or Pico or El Pico as the locals call it) is a mountain of the sort that young children would draw. It is an almost symmetrical cone capped with snow. The peak starts steep and then gets even steeper. It is a mountain that tests the thighs as well as the lungs. And talking about lungs, I had developed a common mountaineering ailment, namely an irritating cough caused by breathing the dry mountain air.

As we approached Pico, it stood high above the surrounding plain, clear with barely a cloud in sight – good day for climbing it? Not necessarily. We found out later in the day that in apparently similar conditions a summit attempt had to be called off because of high winds. 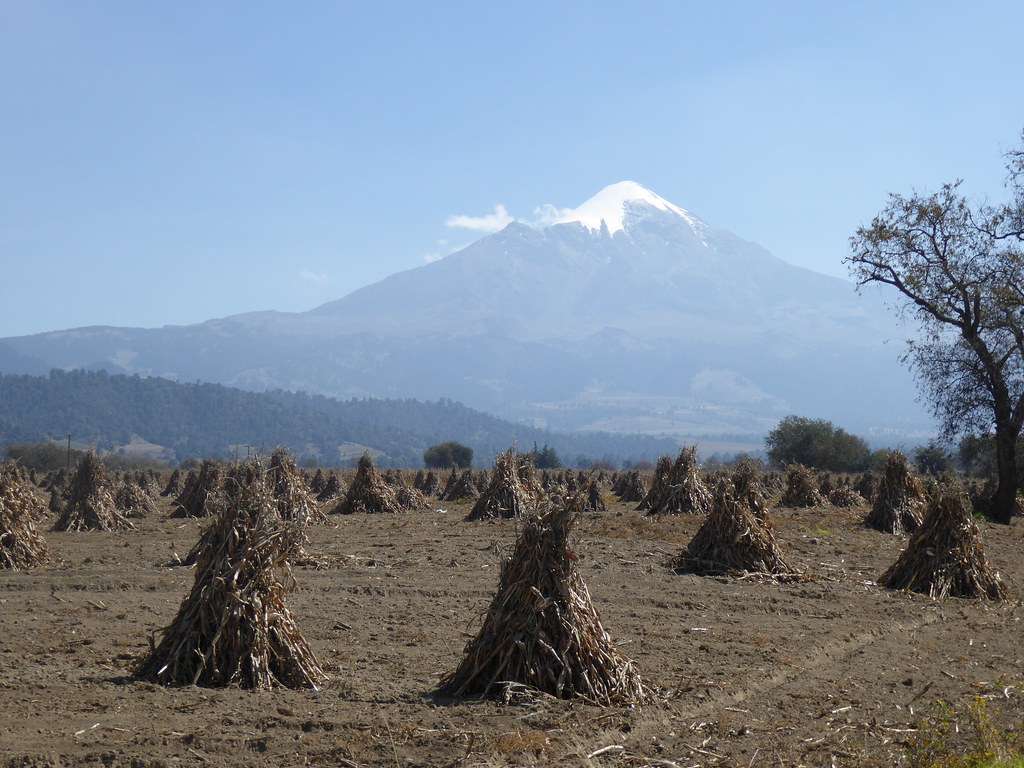 That’s the thing about these committing mountains. Quite a lot has to be with you. It isn’t just your fitness and health. To a large degree these are under your control. But there are those things that aren’t or are less so: the weather; the conditions under foot; the condition of your companions; the impact of being at altitude; the potential for accidents, and being away from loved ones.

I am a relative novice at this. But the management of these aspects fascinates me and I am happy to admit that I am very much still learning. And of course these are not static conditions – weather which starts fine may turn for the worse; snow which may be firm in the chill of the night can become thigh deep porridge under the glare of the sun; an otherwise healthy person may develop an irritating cough. Any and all of these are likely to impact on performance and the speed at which you move through the terrain and, in consequence, the period during which you are exposed to risk. One way of managing risk is to employ guides, as Derek and I are doing, though even guides can’t control the weather or give you extra fitness.

Then there is the one aspect that I have not yet mentioned – the psychology of the climb. I have for a long time considered that climbing mountains is only around 70% about fitness and the skills necessary to negotiate your way safely through them (often called hillcraft). The other 30% is about the psychology of the climb. Often you will be going into the unknown. You wonder if you do have the necessary fitness, strength and will-power; you may worry about those things over which you have no control. In short you worry whether you are up to it. This can be destructive. It can gnaw away at whatever confidence you have. It can make a strong man weak. Even if a person is otherwise “up to it” he or she can psyche themselves out of completing or even of participating in a venture. I guess that this can happen in many walks of life. Mountaineering then is no different though the factors are not the same.

So on Monday, 10th November we left Puebla with a weather forecast that was not looking too good for our attempt on Pico the following day. A storm was moving in and due to arrive in the afternoon.

First we had to call in at the person who would transport us to the mountain. This was in the tongue twister of the town of Tlachichuca, the nearest large habitation. As usual the house was surrounded by high walls. Access was available through 3 metre high gates. Inside there was a courtyard filled with a collection of Jeep Wagoneers. On one side was the house and a communal dining room. On the opposite side was a two story accommodation block with eight rooms. 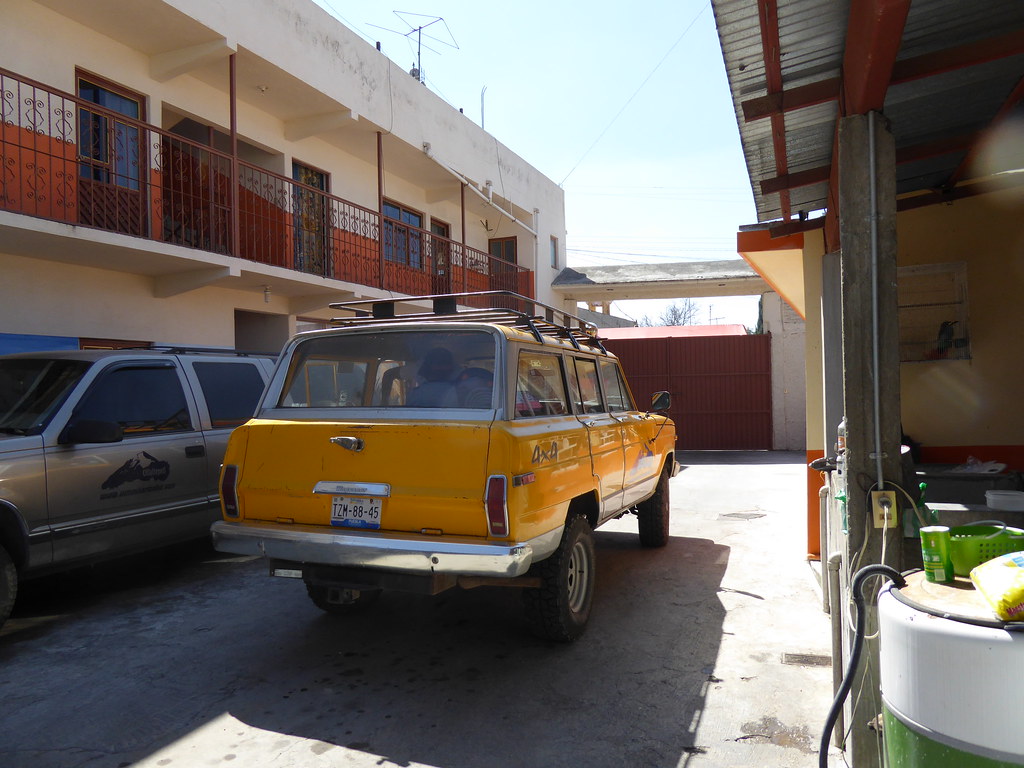 We stopped here briefly to load what we would need for the climb into one of the Jeeps. The rest of our belongings were left in the vehicle we had been using. Then we were off. The road started off as a regular metalled surface. Passing through a village suddenly we turned right and then right again. Neither turn was sign posted to Pico. It was the right way but it seemed odd that the route to Mexico’s highest mountain was not obvious.

The reason might be said to have become clear quite soon afterwards. The road became a dirt track which only a 4WD vehicle would have been able to negotiate. At the final village the road became a road in name only. Rarely much wider than the Jeep it caused us to buck and twist, squeeze between trees and wonder how long it was going to go on for. Fortunately the only vehicle we passed which was going the other way was at a rare widening in the track – that vehicle we found out was carrying an American who had to be taken off the mountain suffering from cerebral oedema. 90 minutes later we had ascended 1,000m (3,300ft) and travelled ten miles to a refuge at 4,200m (13,800ft). 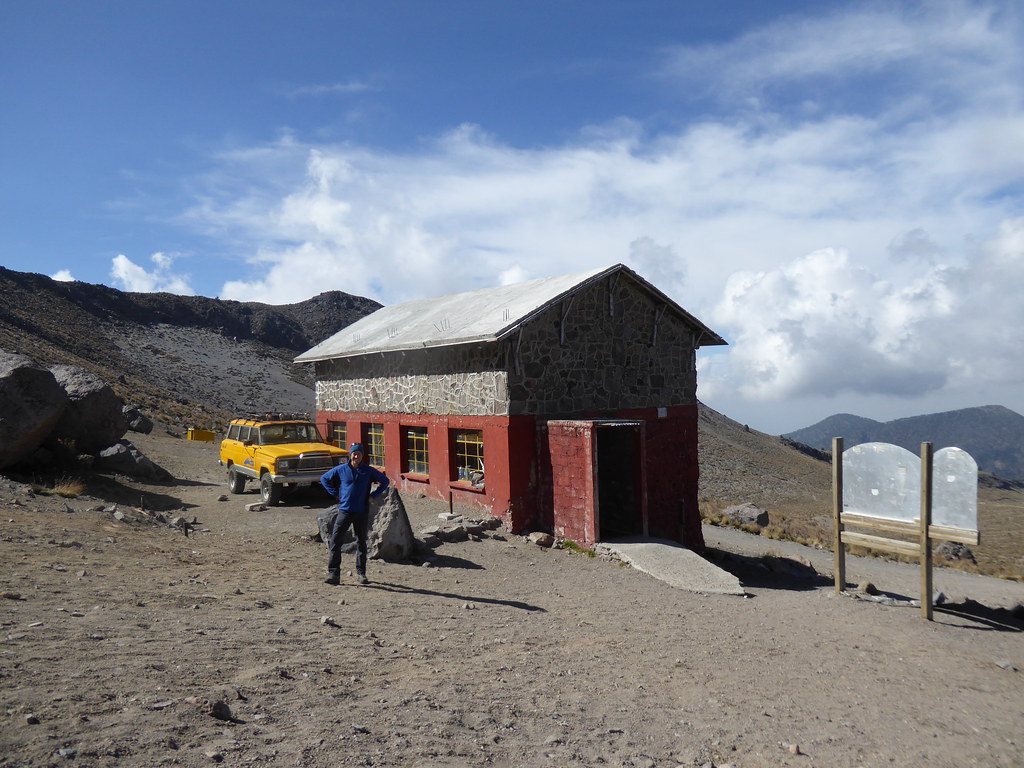 At the hut we had a final gear sort and a bite to eat. It was 3pm. I must admit to some trepidation, probably a combination of the Izta experience and the weather forecast. Derek and I had felt that putting in a high camp rather than staying in the hut would give us a better chance of success. Miriam now said that she did not think it would make much of a difference. 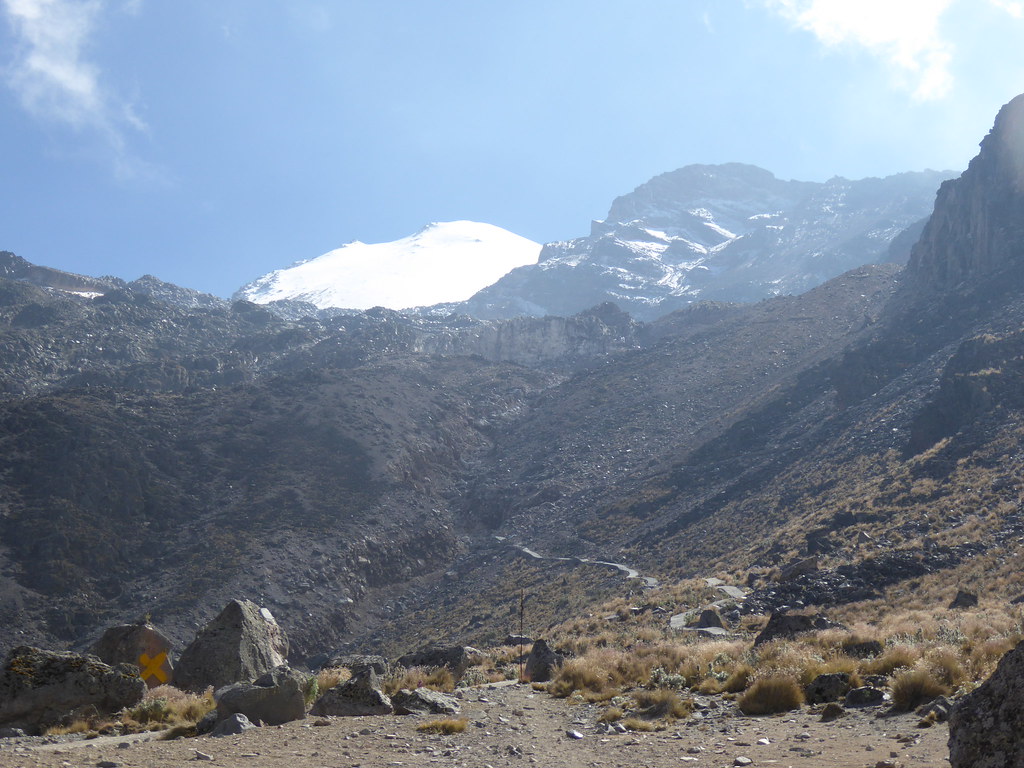 Pico from the hut

So off we went. Miriam had arranged for someone to help with the load carrying. 350m higher and 95 minutes later we had reached our spot for the night. The terrain was the usual volcanic rubble. At one point we had passed a group of four Americans who were returning from an acclimatisation hike. We all helped to put up and anchor the tents and, as Derek and I sorted ourselves out in ours, Miriam arranged for the evening meal to be prepared – cream of corn soup and spaghetti mixed with ham and milk followed by tea. It was not pleasant eating outside. It was cold and the wind was blustery. We wanted to finish our meal before it became dark which we just about managed. 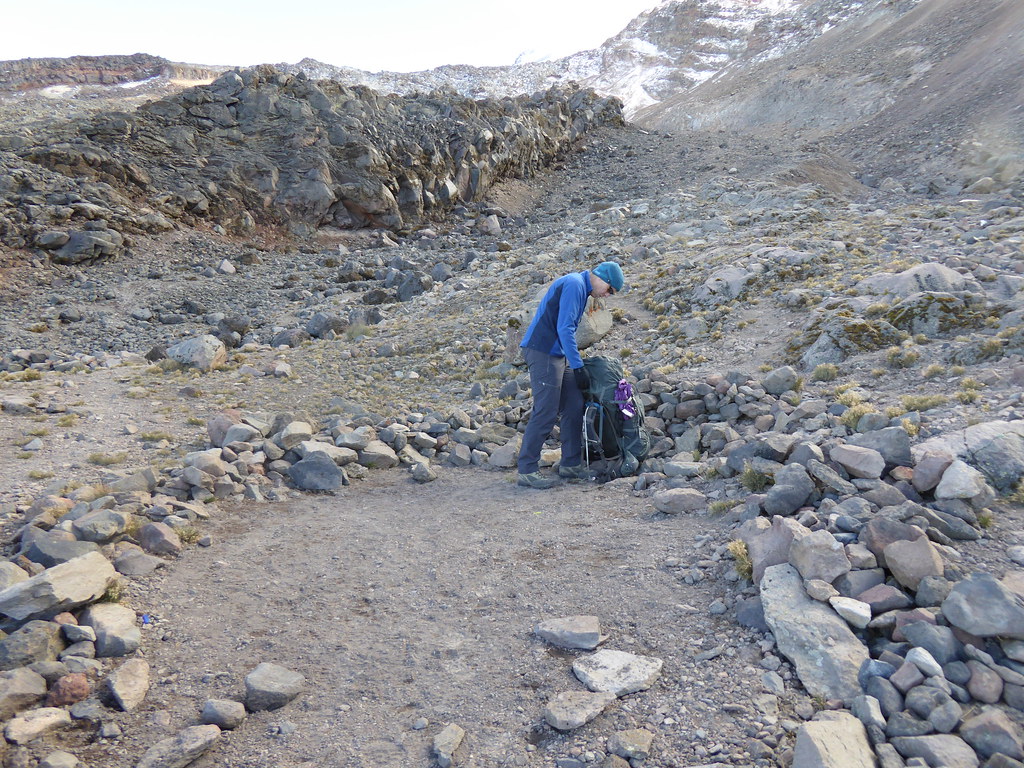 Setting up camp – before… 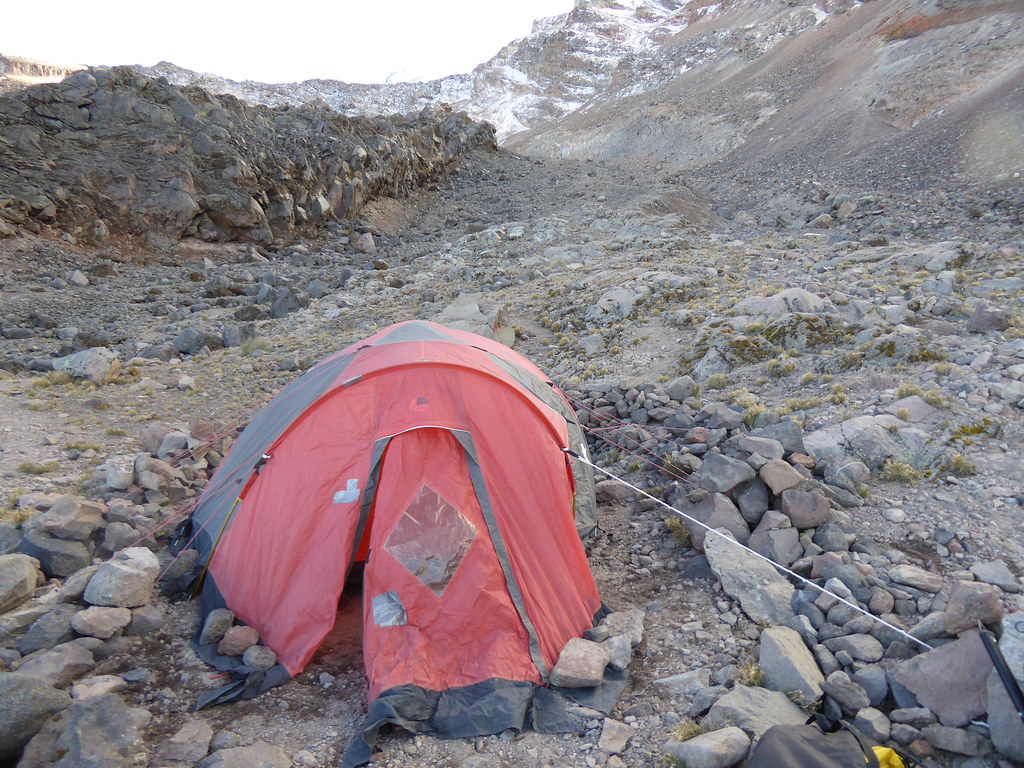 Derek and I were settled in our sleeping bags by 6.30pm in anticipation of the 2am wake up call in readiness for a 3am start to catch the snow at its best and to beat the oncoming storm. 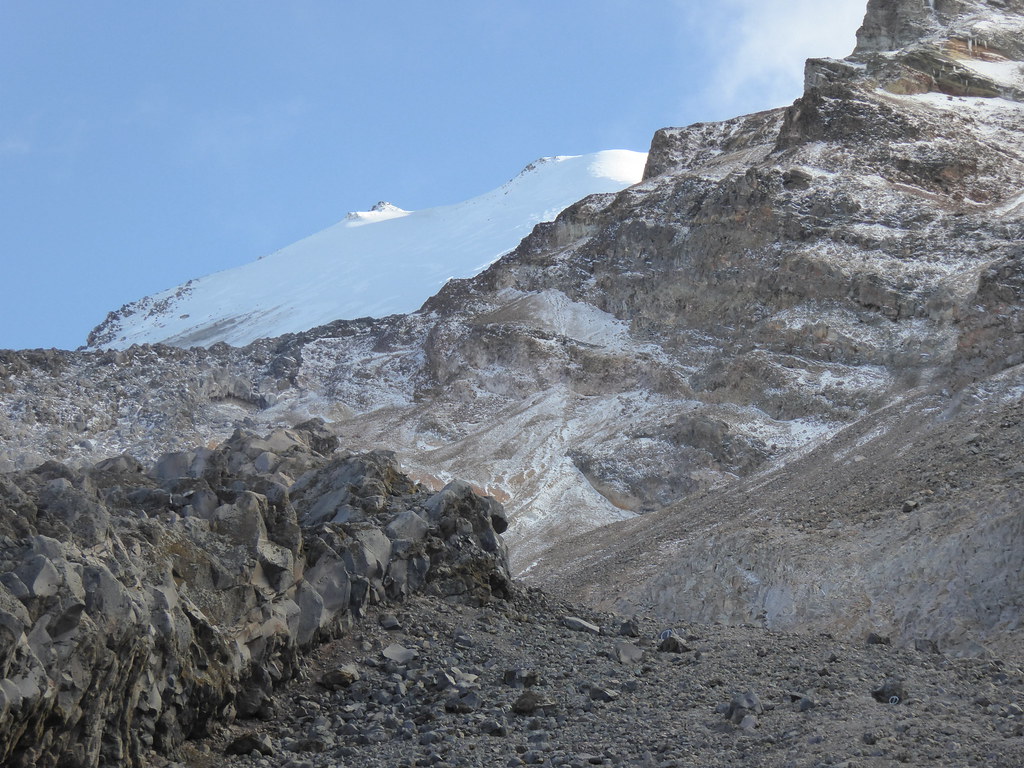 Pico from the camp site