The alarm went off at 4am. As I had gone to bed around 8.30 the previous evening and I have not yet recovered from jetlag this was perhaps not as bad as it sounds. However, sleep after 1am had been disturbed. One thing about being at altitude is that it can do funny things to your body. Whilst I have once before suffered from this affliction, apnoea is a rather alarming event if you don’t know what is happening. Sometimes when sleeping your breathing becomes very shallow. When this happens at altitude not enough oxygen is getting into the system. The body deals with this by waking you up. OK, so far so good. The problem is that you wake up gasping for breath. It’s slightly alarming and definitely unpleasant even when you know what is happening. It’s then necessary to take a few deep breaths (or perhaps more accurately gags). This happened five or six times over three hours. The only positive spin on this was that I was at least sleeping, albeit fitfully.

The previous evening Ricardo had tested our blood oxygen saturation levels using a gadget that is placed on the end of a finger. My understanding is that this technique is not wholly indicative as to how you will be at altitude but it can be a useful indicator. Any sibling competition was snuffed out with Derek and I both registering 96%. Ricardo was on 97%. That is quite satisfactory for 3,000m.

The test was repeated this morning. Whilst my figure had not changed, Derek’s had gone down to 88%. Still perfectly fine but the subject of some mirth.

We were off and away just before 5am. La Malinche is a good peak for acclimatization. At 4,462m it is straightforward but going to that height just two days after leaving Harrogate would be a challenge. The night was calm and mild. The twinkling of city lights below was more than matched by the display in the heavens. Looking at the stars is a definite bonus of early starts. Unfortunately we were soon in the forest, our world now limited to the halos of our head torches.

On leaving the cabins we had been howled at by some dogs. Four of them decided to come with us. Ricardo explained that this was quite a common occurrence and that they would probably go all the way to the summit (which indeed three of them did!).

Ricardo set a steady pace. For an hour we followed a road that is not open to general traffic. We then had a brief rest for food and drink. Setting off again the trail became steeper but soon we saw the first glow of orange of sunrise. The wind picked up and another stop was needed to put on more clothes. An hour after our first stop we were at the tree line with our objective in sight still 450m above.

Here we had our final stop before tackling the upper slopes. These comprise typical volcano scree and rubble. I had been feeling OK up to then but I did struggle a bit. I wasn’t getting my foot placing right and so was using up precious energy correcting little slides. Whilst Derek never gained too much distance on me Miriam stayed with me to make sure I was all right.

Eventually we reached the final ridge. There was one false summit and then the final rise. Ricardo and Derek were scrambling up the final 10 metres two minutes ahead. Miriam and I soon followed. It was 9.10am. There were handshakes all round and wow, what views. To the north were Popocatapetl and Iztaccihuatl; to the east, Pico de Orizaba; all standing proud of the haze and patches of low cloud.

The wind had died down on climbing up to the ridge and on the summit there was just a hint of a breeze. The air temperature was a little over freezing but the sun was strong and warm. We remained on the summit for just over an hour looking at the views, eating and drinking. Staying for so long would help with the acclimatization. The three dogs were curled at our feet also catching the warmth and hoping for hand outs!

Eventually it was time to descend. The final slopes which had been such a pain on the way up were now a delight as we surfed down. In 35 minutes we were back at the tree line, passing a large group of Germans who were going to struggle in the heat.

The measured pace of the ascent was replaced by a dash down. This probably did not help the headache that Derek was developing. We had one more stop where we met the road, and were back at the cabins 2 1/2 hours after leaving the summit.

We had lunch at the cabins. Derek, still suffering from his headache, could not manage much and went away to pop a couple of pills. We found him later flat out on a patch of grass with yet another dog lying next to him!

[As an aside, the rural parts of Mexico do seem to have lots of dogs wandering around.]

This afternoon we have come to a hacienda where we are staying the night. This is a former walled house called Santa Barbara on the outskirts of Huamantla where we were yesterday. It was walled in order to protect its occupants in the days when marauding gangs roamed the country. In the corner of the complex is a long-disused church that is gently crumbling away, its tower a good viewpoint apparently. Behind the large wooden gate that gives access is a courtyard with fruit trees. Leaves litter the ground and some fruit still dangles from the branches. The place is full of character. Parts are nicely done. The rest, like the church, is slowly crumbling apart.

The rooms (of which there are six) are accessed directly from the courtyard. We are the only guests tonight. The rooms have high ceilings to cool them in summertime. But now it is a pleasant 22C. A single light dangles from the ceiling in our room emitting a glow that barely makes a difference. We will have our evening meal in a long vaulted hall, which has a dining table seating 12 at one end, and a set of low settees at the other. This room is equally dimly lit. In the middle alongside one of the walls is a religious display. 2nd November is El Noche del Muertes, a festival that is both of some religious significance and also provides an excuse for dressing up as skeletons, ghosts and the like. The display has various offerings, mainly food set amongst orange paper and candles. 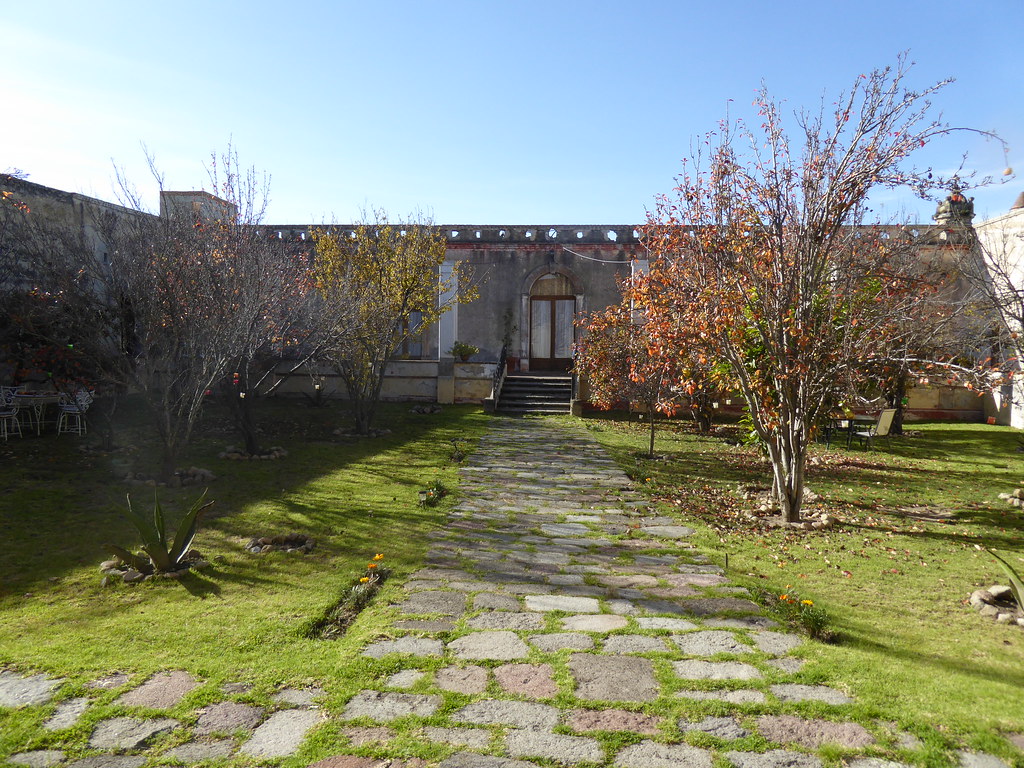 We have had the chance to freshen up before tomorrow heading for Izta’s base camp which we can drive to.

Ricardo has just insisted on putting his gadget on my finger again. Down one point to 95%. I must go and see what Derek’s reading was…