After the previous day’s exertions I was not up for a mega day.  So it was a more leisurely start at 9am.  The start point was that suggested by the WH route and I was soon walking down the track towards Loch a’Bhroain.  Again the forecast was not that promising according to MWIS with an early 70% chance of cloud free summits dropping to 20% during the afternoon and drizzly rain becoming more extensive.

In less than 20 minutes I was at the bridge over the outflow to the Loch.  The public footpath has been diverted through a short section of woodland to accommodate the prospective rebuilding of the lodge on the Loch.  There is a brief notice about the plans at the beginning of the track.  I followed a woman walking her three dogs and another solo walker who was tackling the three Munros to the east. 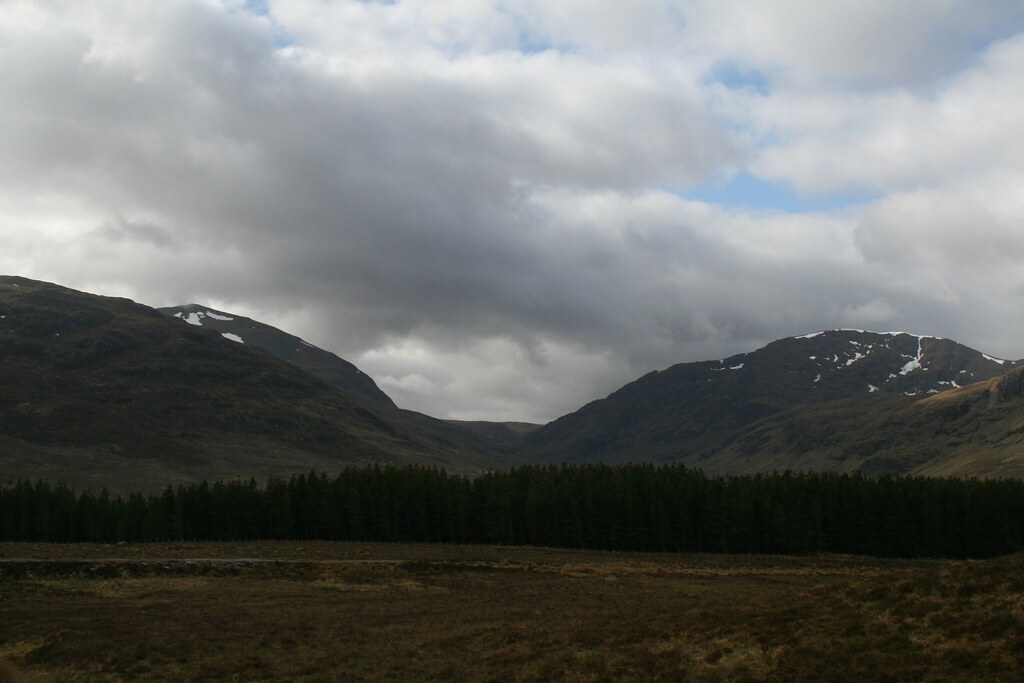 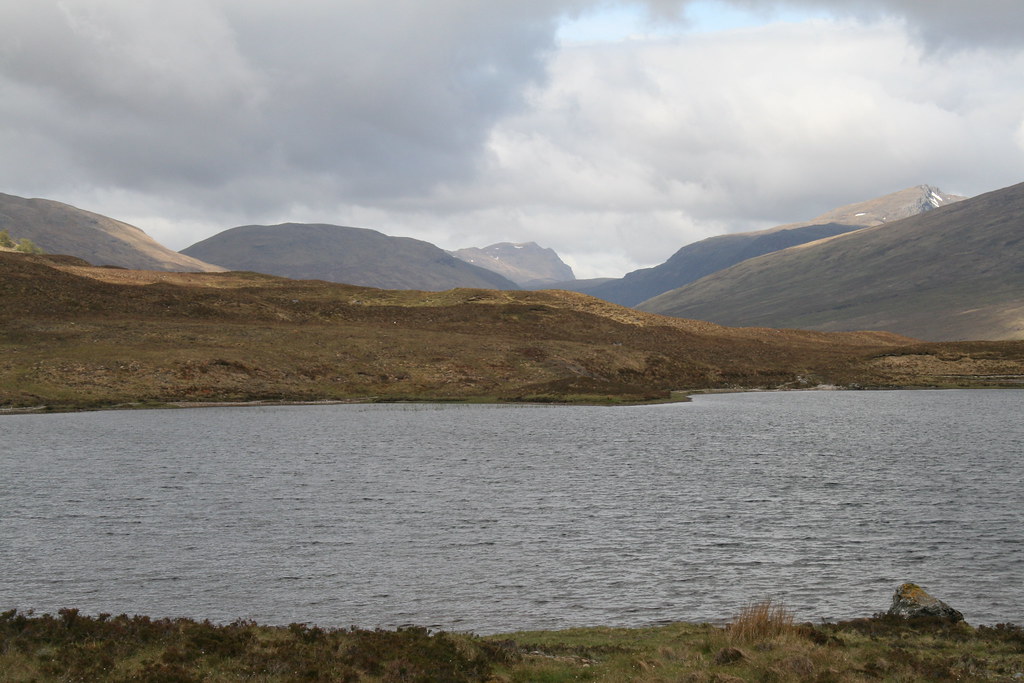 I was going to continue along the path that eventually leads over to Loch Fannich up to the watershed before turning north-west up the east ridge of Sgurr Breac.  One disadvantage of this route might be the difficulty of crossing the river if it is in spate conditions.  However, there is a path that continues up its left bank if a crossing proves difficult.  I know this because in my indolence I carried on up the left bank having missed that crossing.  The ground did become a little boggy higher up where the skeletal remains of buildings can be found, but the river crossing here was simple enough and I worked my way across the “proper” path about one kilometre short of where the map shows the path crossing the river again.  This is at a point just short of a small waterfall.

It is a well-engineered path and its deposits you at the watershed with a view down to upper Loch Fannich. 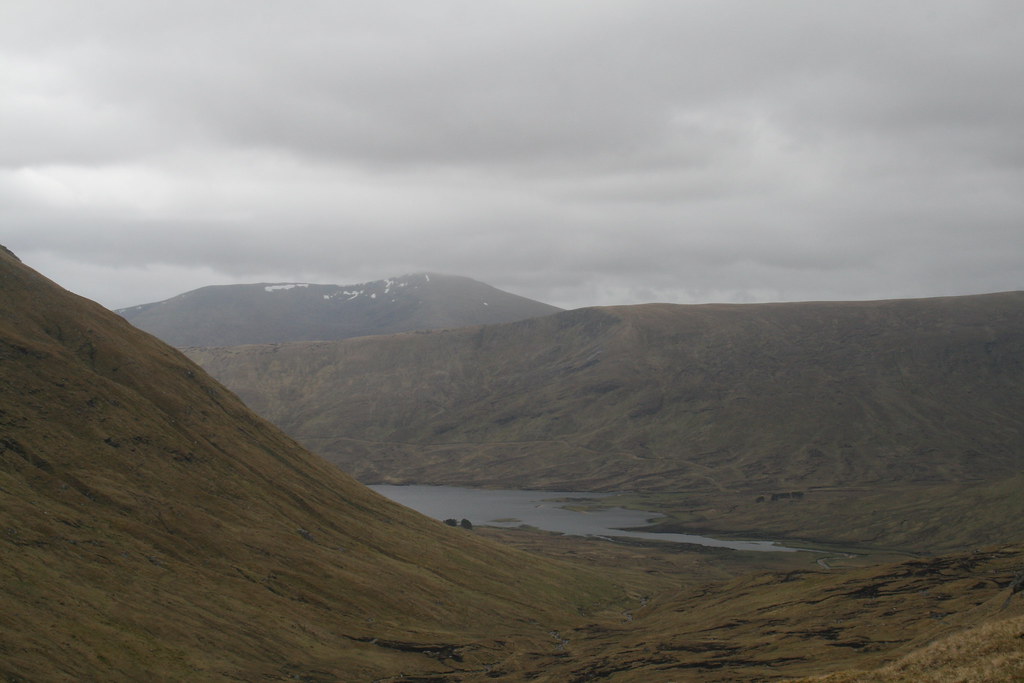 It was about two hours to this point, including a short stop for food and water.  I found the glen quite pleasing with Sgurr nan Clach Geala rearing up to the left and some cliffs on Sgurr Breac to the right.  I saw one figure up on the lower slopes of Meall a’Chrasgaidh slowly making his way up.

At the watershed a small cairn marks the way to the right up some initially wet ground.  But this was soon passed.  A strong path then leads most of the way up.  The top of Fionn Bheinn was covered and grey clouds were massing to the south and west.  My hopes for a clear summit seemed to be foiled as cloud descended when I was still a little way off.  Soon afterwards I met a group of three who had had an early start and were doing my route in reverse.  We had a brief word.  The cloud had been down on Sgurr Breac when they were there.

I continued and as I ascended so the cloud rose too.  In just under three hours I was at the top. 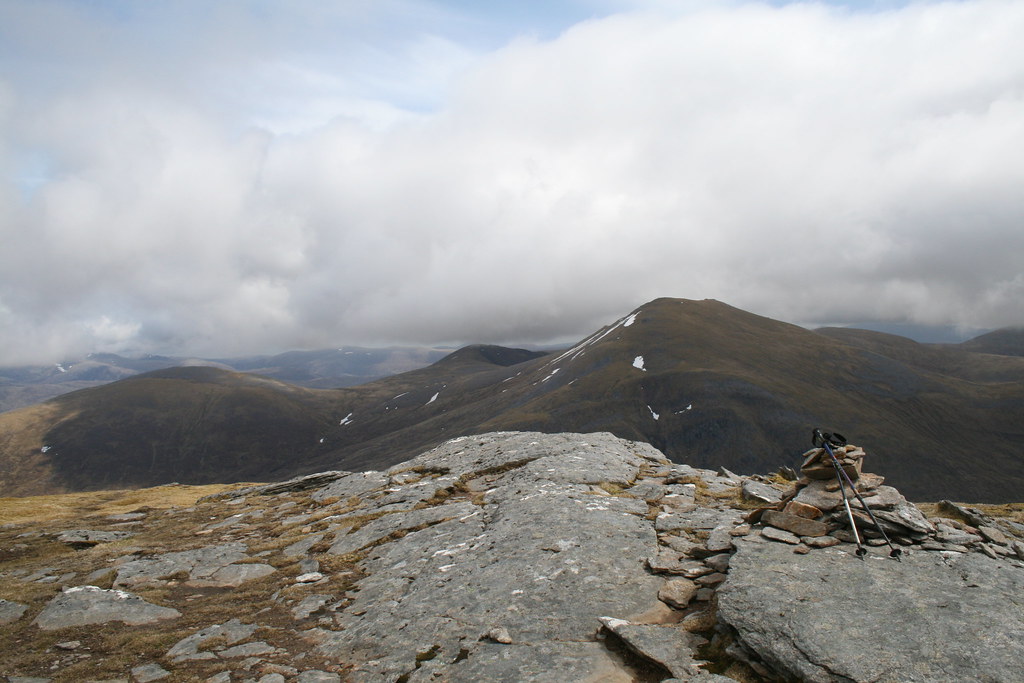 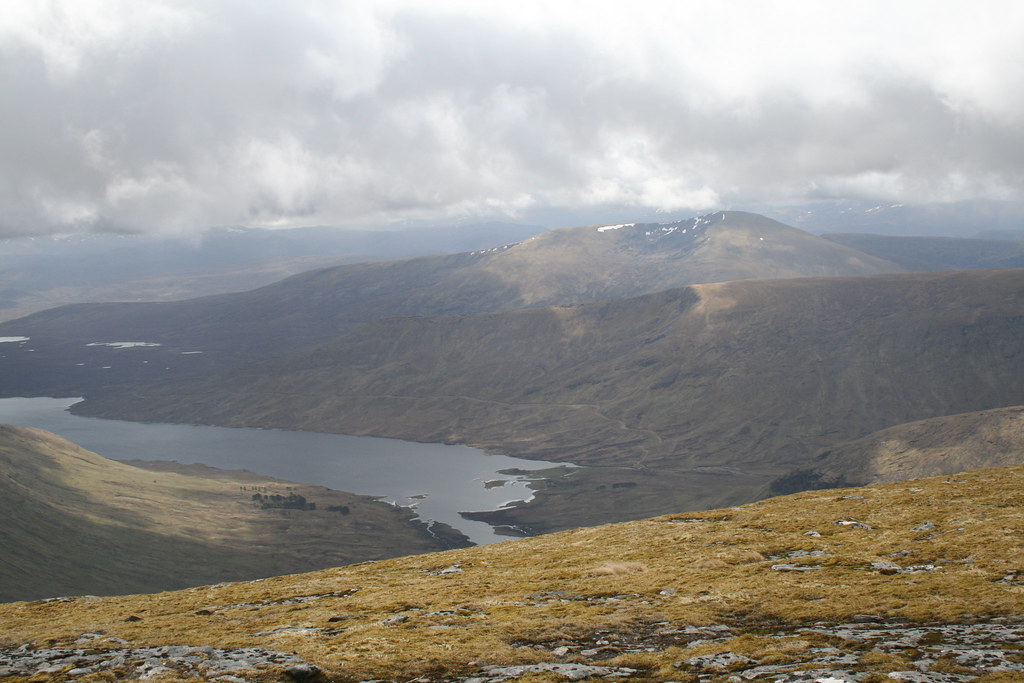 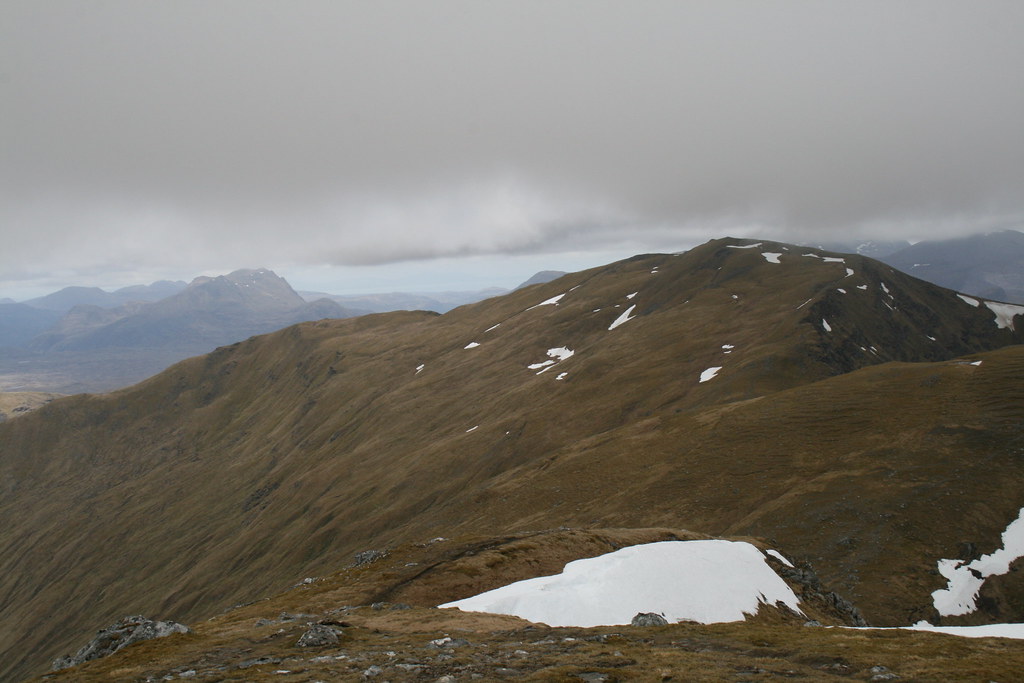 Fionn Bheinn was now clear.  Sgurr nan Clach Geala opposite stood proud.  Much further to the west there was lower cloud and evidence of rain.  It was windier than forecast so I did not stay long and I wandered over to the second cairn which marks the start of the short but steep west ridge.  From the bealach before the top of Toman Coinnich I contoured around the southern slopes of that top.  An incipient path can be followed so far before it disappears.  If you follow it, I suggest the only height that is then lost is that to avoid a small section of rocky outcrops.  The next bealach was then easily reached.  Again a strong path takes you up the 600ft of ascent to the summit of A’Chailleach.

Although there was less blue sky now, the views to Slioch, Fisherfield, Beinn Dearg and the rest of the Fannichs were good.  The higher Assynt hills to the north-west were blanketed in cloud though and An Teallach could not shake off its cover.  It had taken me about 45 minutes to walk between the two Munros.  I sat a few feet down from the cairn to keep the worst of the wind off me and had a late lunch – grateful for the views and checking that none of the grey stuff was going to come my way.  I had a good half hour there taking it all in.  I still seemed to have these two Munros to myself. 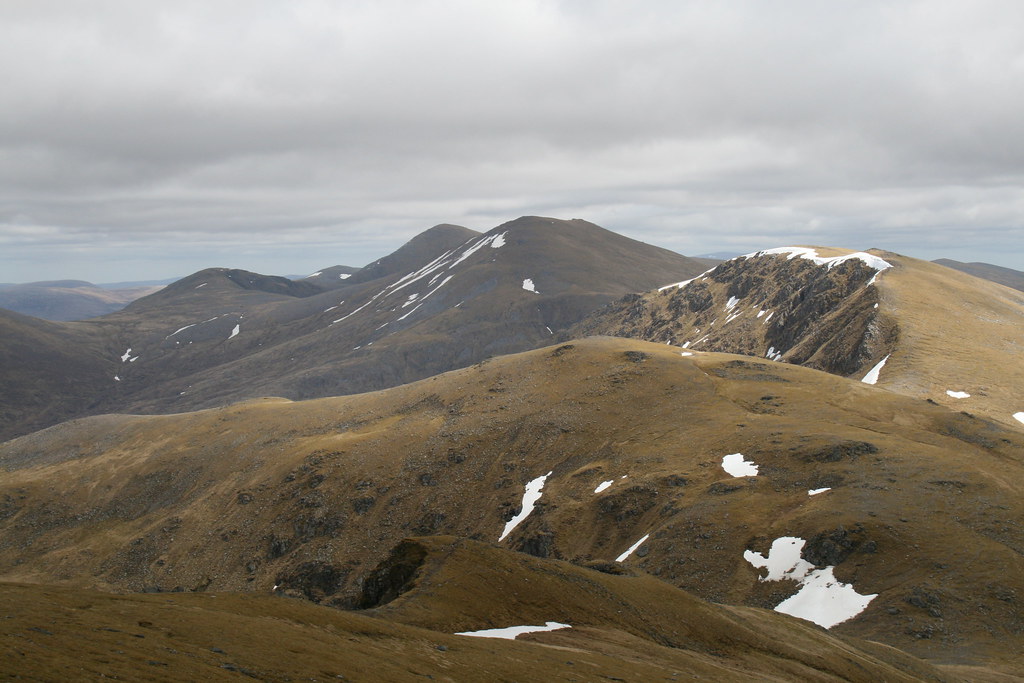 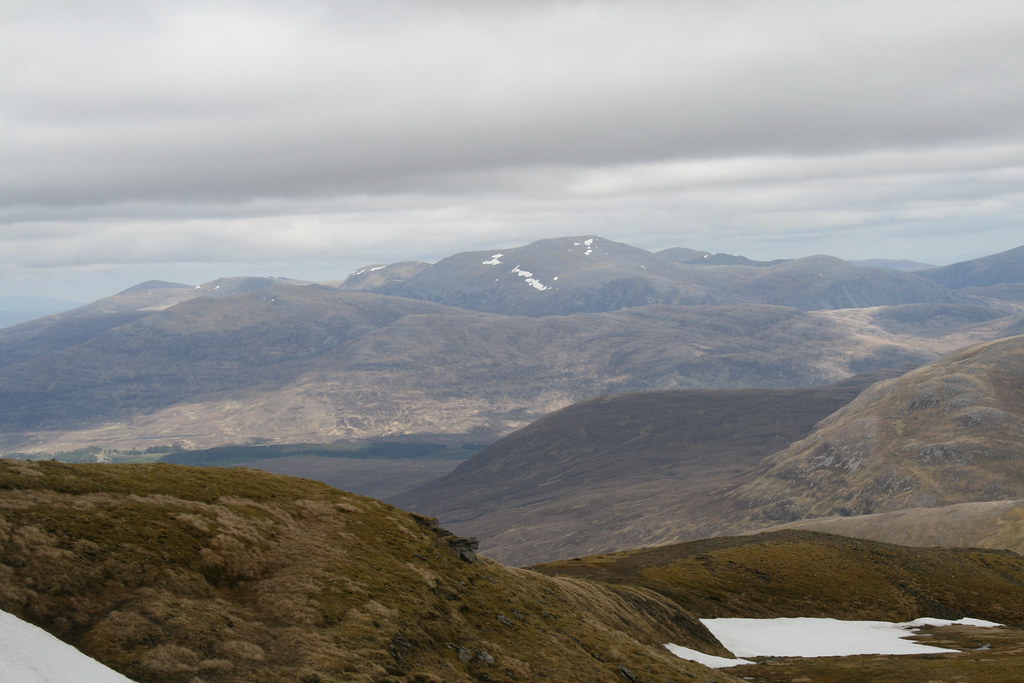 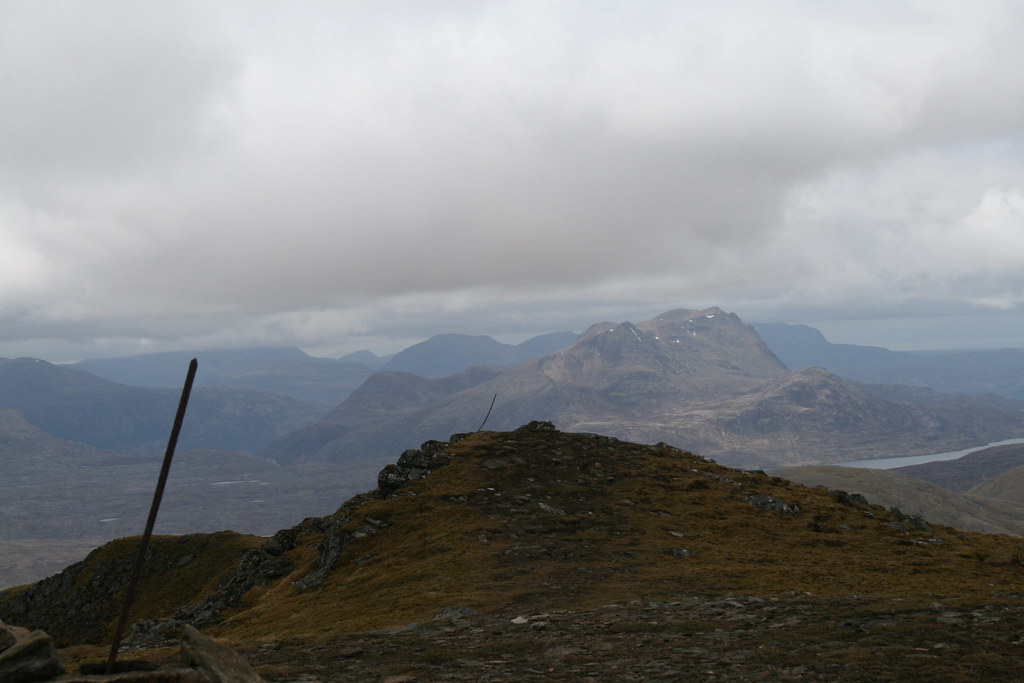 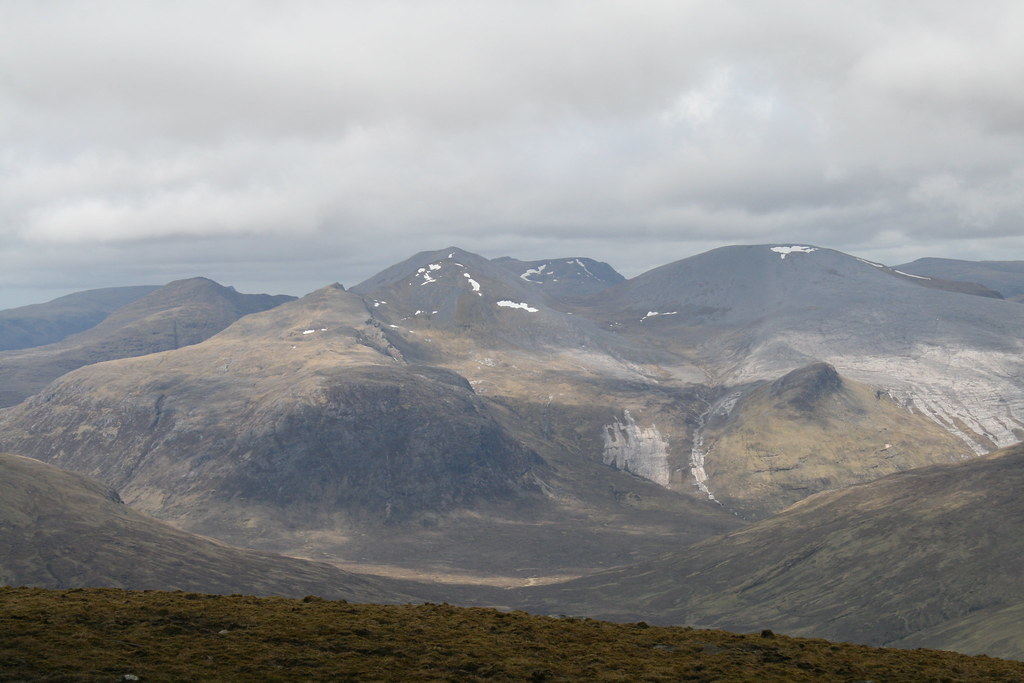 Time to go then.  My way off involved returning to the summit of Toman Coinnich and descending the route of the WH ascent along Druim Reidh. 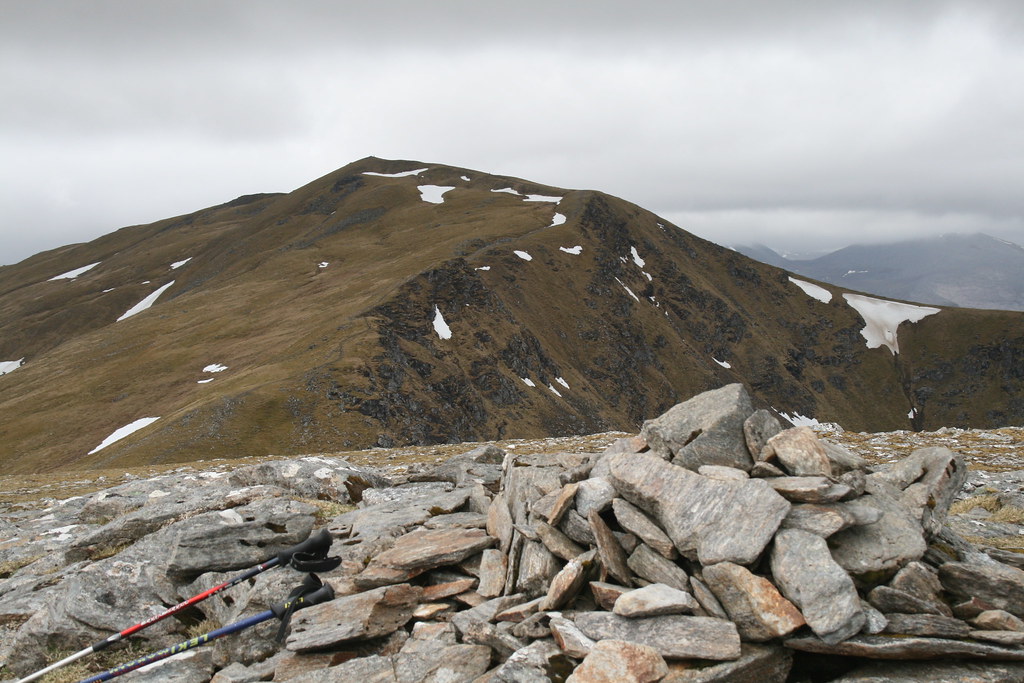 This is a great way down.  The ridge is mainly easy angled and the ground underfoot is kind until the very end and interest is maintained by the good views north to Beinn Dearg and the north-west.  I spied a few others descending from Sgurr Breac.  Cloud started to brush the top of the two Munros.

I have used the way off Sron na Goibhre.  I remember it as being, ankle turning and wet.  The new planting by Loch a’Bhroain does not help though, as the WH route description states, there are stiles over the deer fence protecting the new plantings.

At the end of Druim Reidh, there is a steep peaty path that avoids the crags and gives a quick loss of height.  It continues avoiding also much of the wet ground until right at the end before the Loch Fannich path is joined.  Once on the path I was back at the bridge in a few minutes.  I stopped there and looked along the Loch up to distant Slioch and the Fisherfield hills, their heads just covered with clouds.  The water slipped quietly beneath me as I contemplated how lucky I had been with the weather.  I was back at the car before 4pm after a leisurely round of 6¾ hours.

[This blog was originally posted at http://www.walkhighlands.co.uk/Forum/viewtopic.php?f=9&t=33140]