You are here: Home / Blog / Southern Corbetts – Cairnsmore of Carsphairn

In March I made a quick visit north of the border with Jet. The aim was to climb the two remaining southern Corbetts that I had not done – Cairnsmore of Carsphairn and Corserine. By way of reminder, a Corbett is a hill in Scotland between 2,500ft and 3,000ft with a prominence of at least 500ft. There are 222 of them with seven being south of Glasgow/Edinburgh.

So for me the two I had an eye on did not involve a long drive up to the Highlands. That said, it is still a 4 hour drive into the depths of Galloway. Over the years I have tended to drive by this part of Scotland on my way to the rugged Highlands.

So one Saturday morning I left home early. Leaving the motorway at Gretna I bypassed Dumfries to New Galloway and then turned north. Passing through the intriguingly named settlement of St John’s Town of Dalry, I reached the village of Carsphairn and (just beyond there) the Green Well of Scotland.

Dalry (as it is usually called) sits on an old pilgrimage route. The Green Well looks to be just a small pond. But it is a site associated with legends of hidden gold.

Cairnsmore of Carsphairn was today’s objective. It is 797m (2,615ft) high but has a significant prominence in part because it is located away from any higher ground.

I found parking on the west side of the road just before the bridge that carries the A713 over The Water of Deugh.  It was also conveniently opposite the start of a track that we would be following. It was now 10.30am and I had a bit to eat before starting off.

Jet and I crossed the road, joined the track, passed a cottage and outbuildings and followed The Water of Deugh. The track was of motorable hardcore for a while before it reached a gate and a field passing a large cattle shed. Here the track began to deteriorate as it had been churned up by vehicles and cattle. Indeed there were quite a few cattle ahead and I was concerned that Jet would be spooked. I sent him to the left around the edge of the field near the river away from the cattle. Fortunately the cattle were not really interested so I could concentrate on not getting too muddy.

The track then improved again at another stream. The ground began to rise and there were a few more cattle. Here is a view back the way we had come and towards the Rhinns of Kell, the line of hills we would tackle the following day. 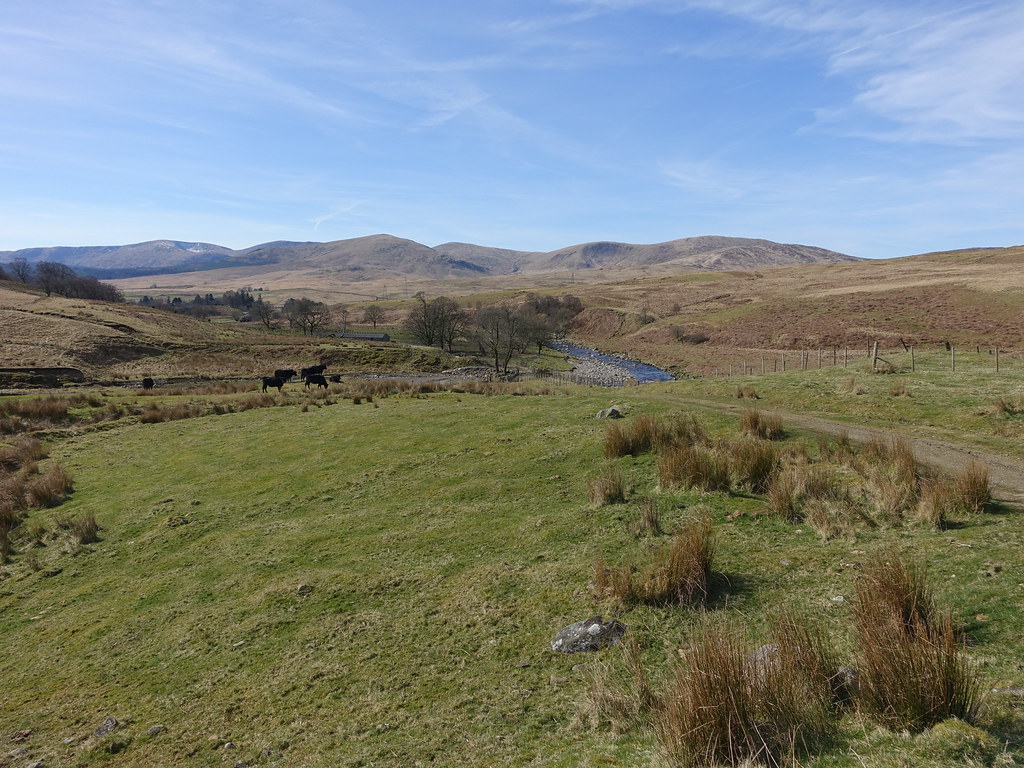 I heard the noise of a motor behind us and soon we were overtaken by three men in an ATV. Mutual hellos were said. We would see them again later.

We climbed a further 100m in elevation at an easy gradient as the track skirted Willieanna and Dunool. Just before the track swung to the left to meet a wall we struck out straight ahead to meet up with the same wall where it crossed a small stream with a convenient bridge. It was a little boggy here. The way ahead comprised uniform grassy slopes with the wall being the only major feature and a few snow patches high up. 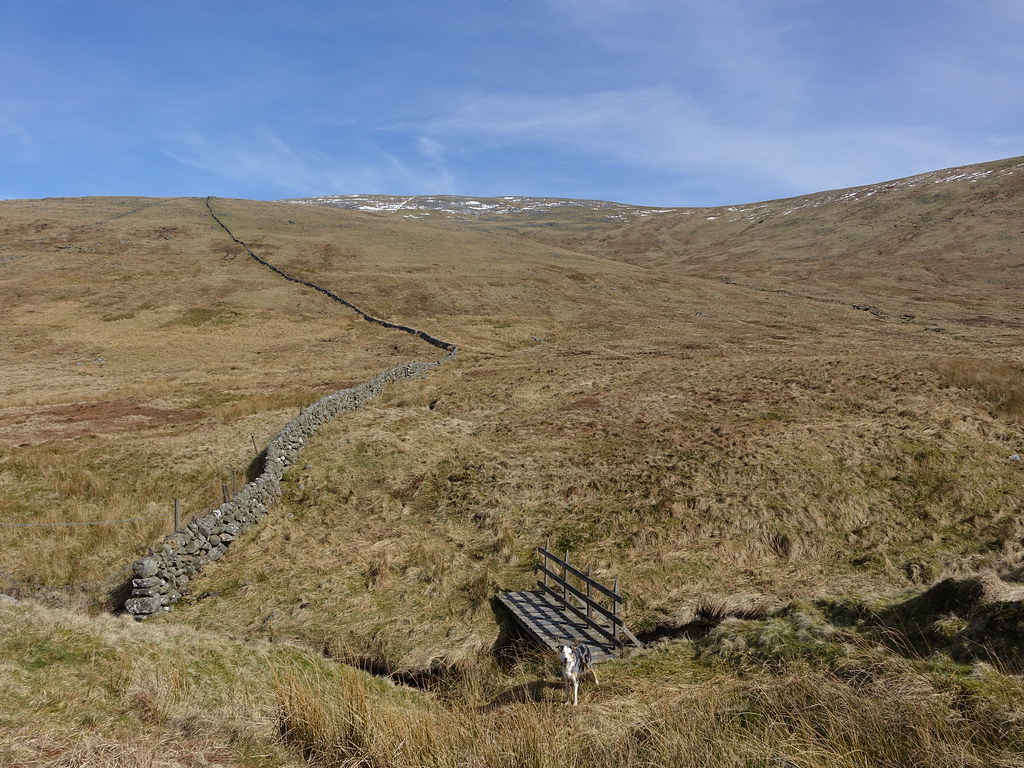 From this point it was just a steady plod up the easy ground. The wind picked up a little but it wasn’t at all bothersome. Soon we were approaching the top, just 90 minutes after setting out.

Here we met our men from the ATV again. There is a small communications mast on the summit and they were working on it. We had heard the ATV puttering along a ridge up to our right as we followed the wall up. 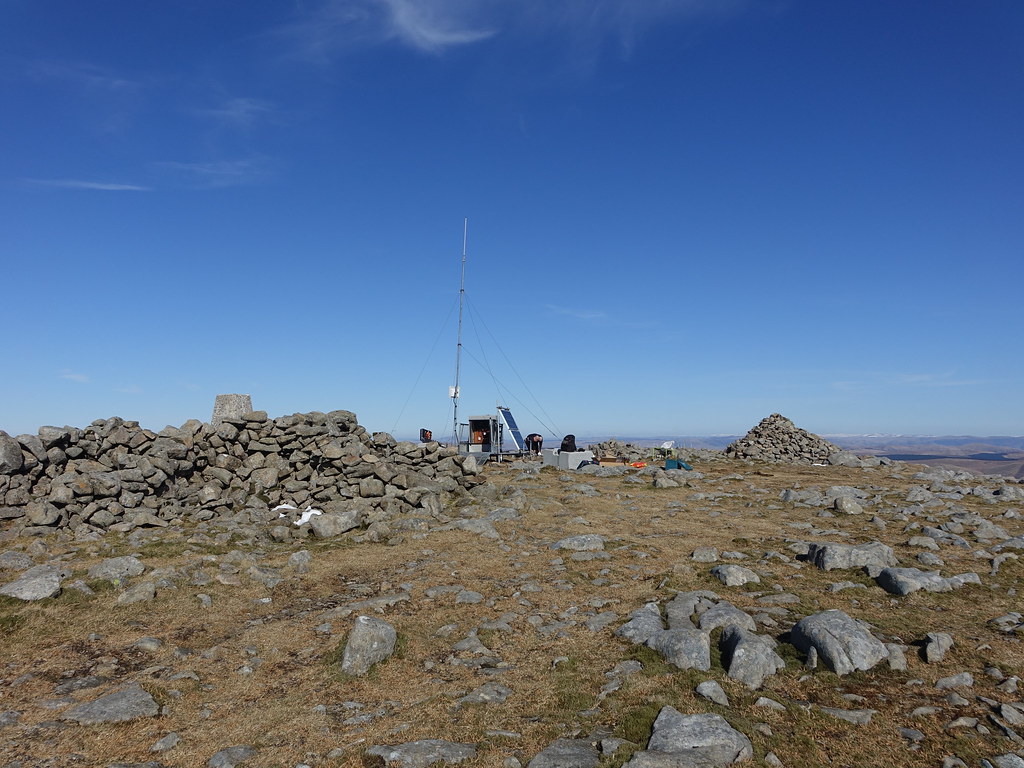 It was too early for lunch. So I looked around at the view. Distant views were surprisingly hazy. You are supposed to be able to see the Isle of Man, Ben Nevis and the North Sea from the summit. However, although it was sunny, there was too much atmospheric haze to see them on this occasion. The Lakeland hills to the south were still carrying a surprising amount of snow. 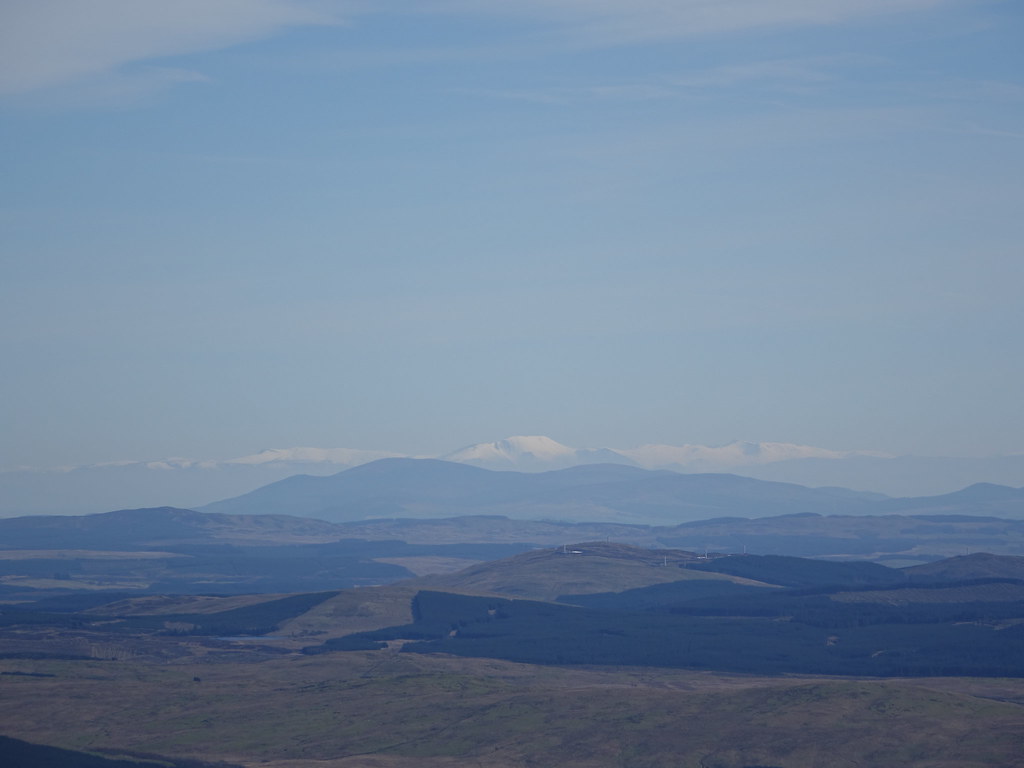 The Isle of Arran showed to the north-west. 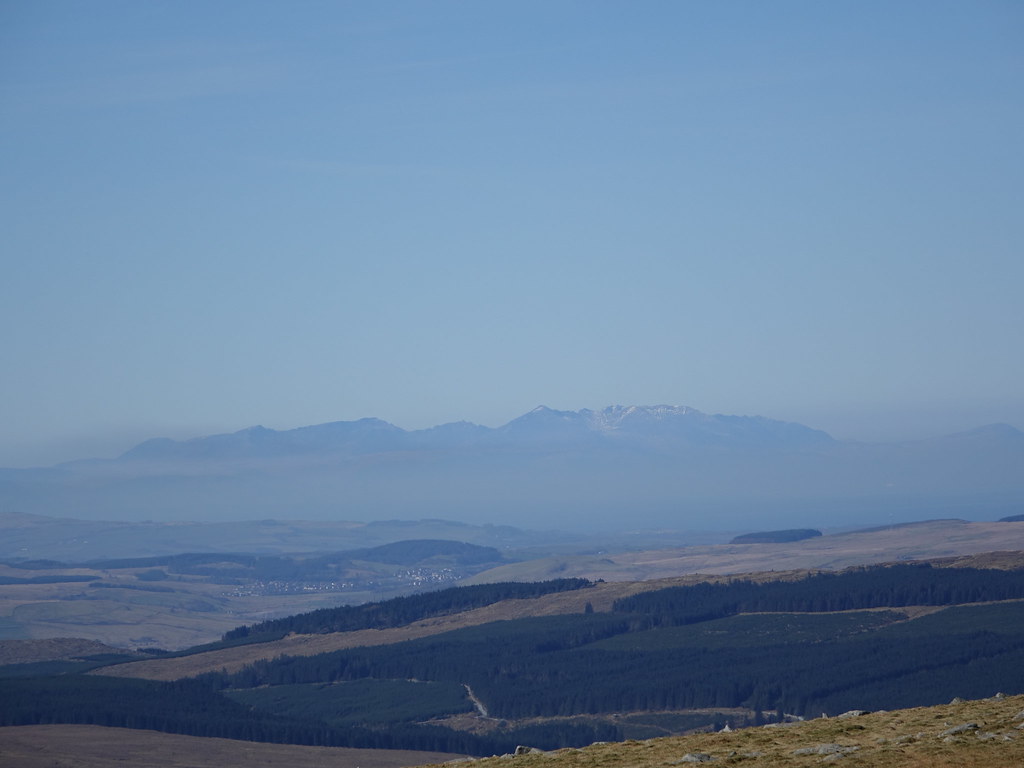 Merrick (the highest hill in the vicinity) and Shalloch on Minnoch stood to the west. 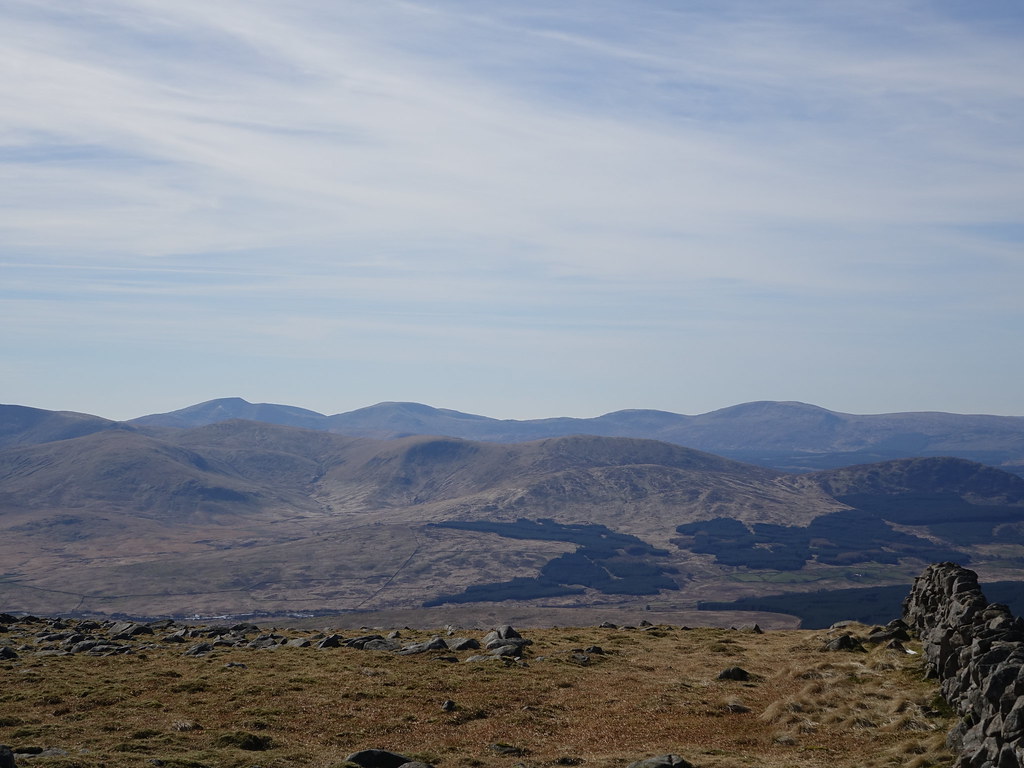 Jet (as is his wont) found a pool to paddle in with, behind, the blots on the landscape – a large windfarm of the sort prevalent in the Southern Uplands. 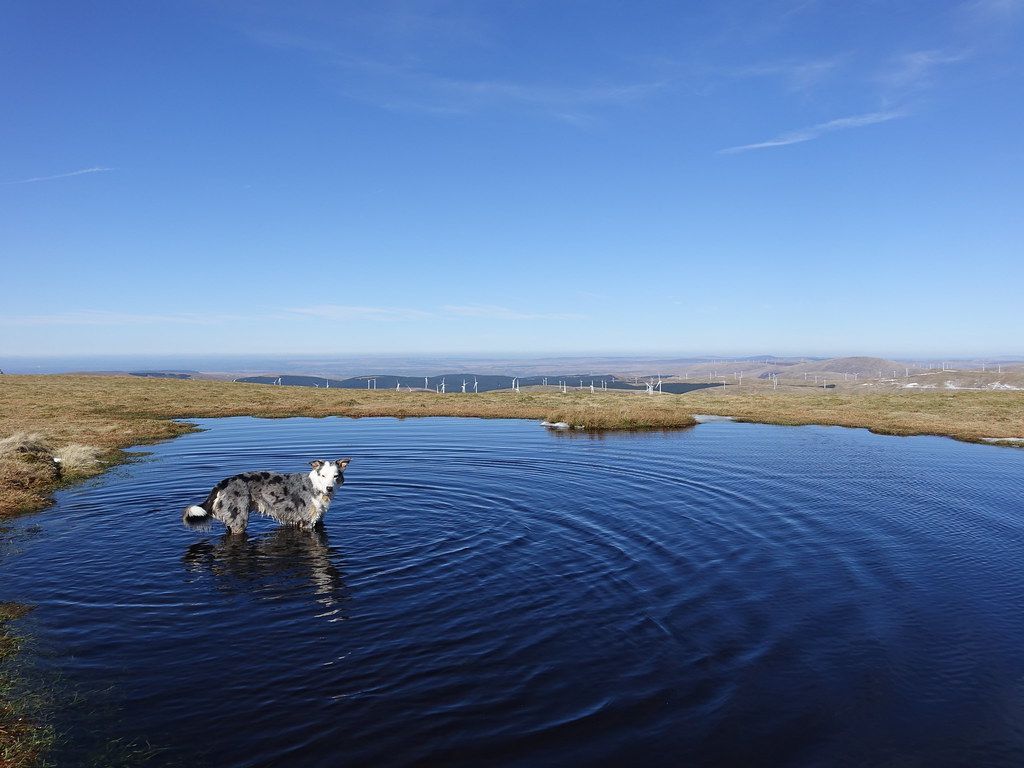 We sat down in the cairn for lunch. It was now nearly 1pm and warm in the sun sheltered from the breeze. The workmen continued with their labours. It felt a little odd me being there eating my food looking at the views and them and their machinery working away.

Well it became time to leave. I varied the descent by following the ridge that the ATV had come up.  Again we followed a wall over Black Shoulder – where I passed a couple of other walkers and the ATV returning to collect the workmen – Dunool and Willieanna before trending to the right to pick up the track. 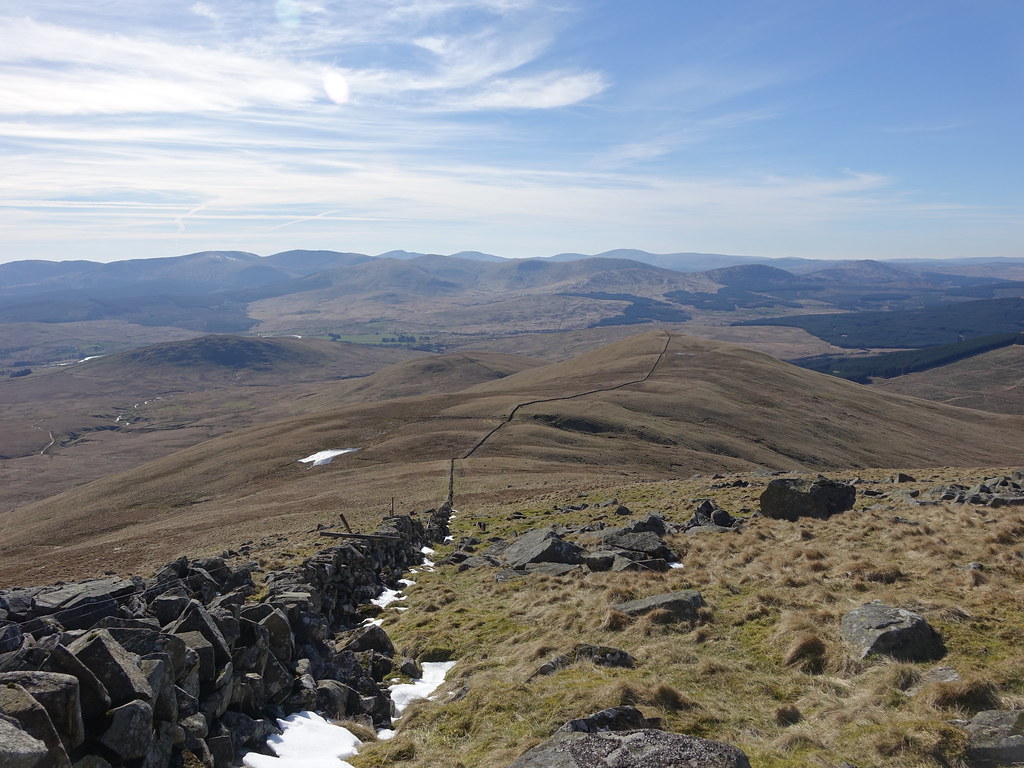 The cows were a lot more spread out so there was a bit of stress managing Jet through them but once through them, we went easily back to the car.

From there I drove a few miles to check out the start point for tomorrow’s walk along the Rhinns of Kell before finding a spot to hole up for the night.  It was a nice easy walk in expansive country.  With an early start it would be possible to climb this hill and tomorrow’s in a single day.