At breakfast the day after my and Caroline’s great trip to Leum Uilleam, Caroline told me that she had hurt her back and did not feel able to join me.  So I hurriedly adjusted my plans for the day.  Either side of Loch Leven stand two somewhat neglected Corbetts – Garbh Bheinn and Mam nan Gualainn.  They are dominated by the Glen Coe hills to the south and the Mamores to the north.  I had not done either, they would both provide decent climbs and they were not that far from Fort William.  In fact, there would be 1700m of ascent between the two – useful preparation for Antarctica.

I chose Garbh Bheinn, to the south of Loch Leven, as my first target.  There is some space for car parking by the bridge over the Allt Gleann a’Chaolais.  A path starts, rather unpromisingly at first, almost opposite.  It was a bit wet but improved as height was gained and the long west ridge of Garbh Bheinn followed. 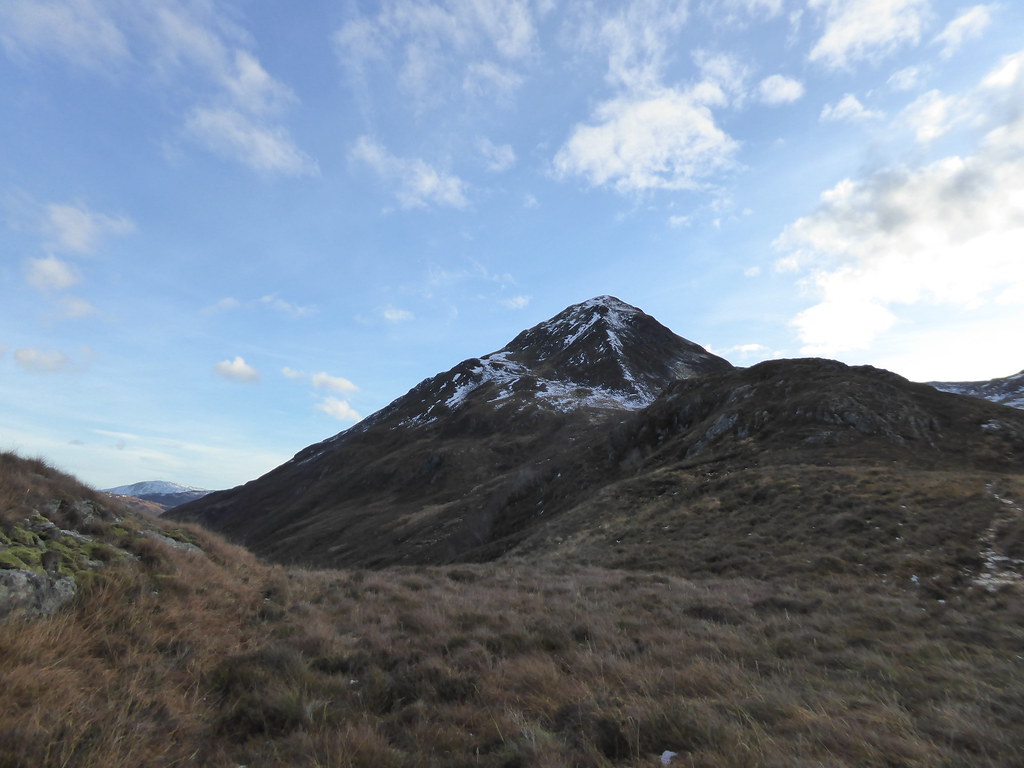 The path gained height quickly on to Torran nan Crann, levelled out and then rose sharply again up the slopes of Stob Coire Sgoilte.  There were patches of snow here and the path was covered most of the way up.  So I ended up climbing slippery grass peppered with rocks.

It was another beautiful sunny say.  I was out of the wind most of the way up, but at the top the breeze was brisk and I had to put on another layer when I arrived.

There are two cairns on the top.  The eastern (lower) one has views out over the Blackwater Reservoir, Rannoch Moor and distant Schiehallion. 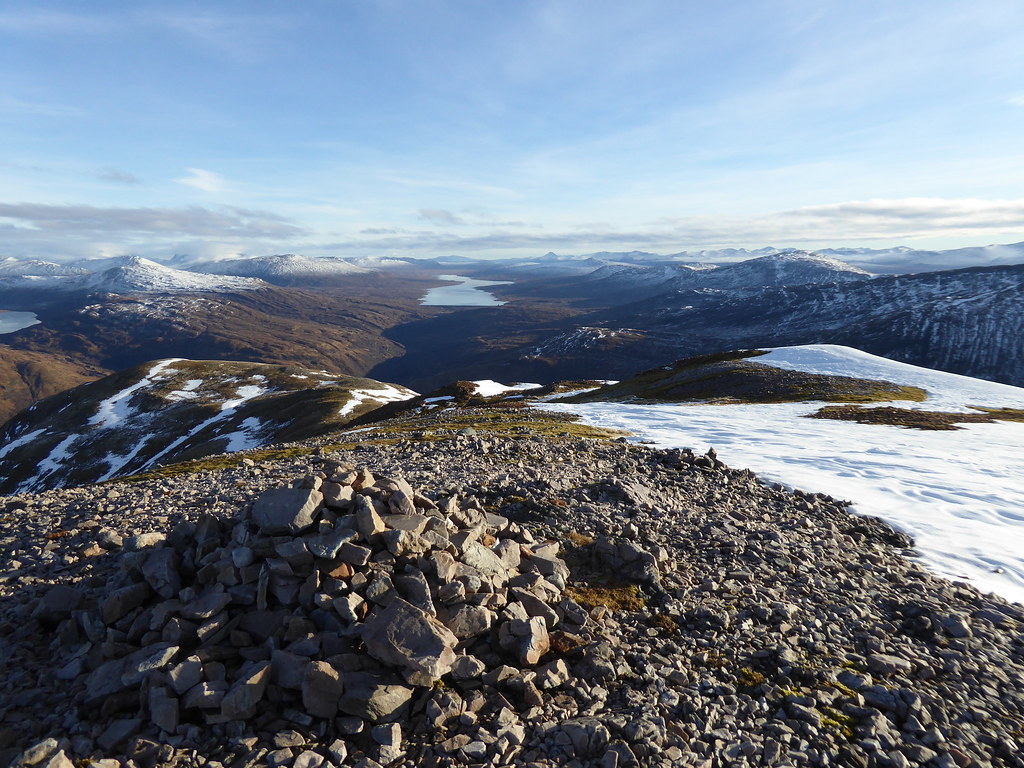 The western (higher) one looks down to the lower reaches of Loch Leven. 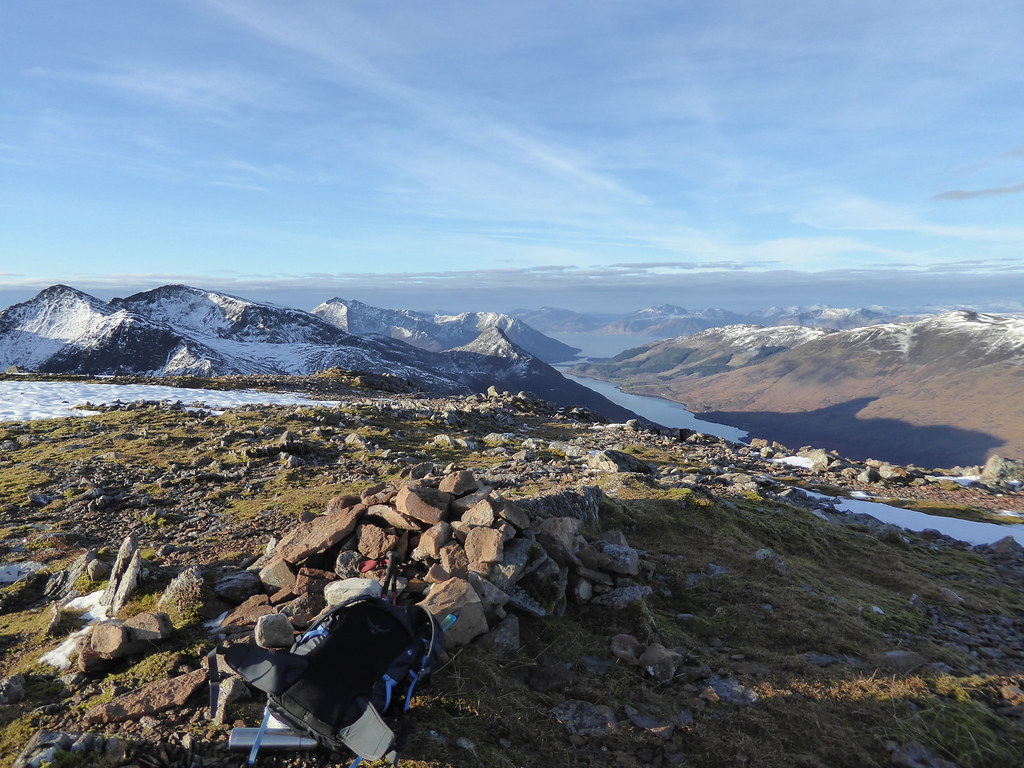 To the north ranged the Mamores. 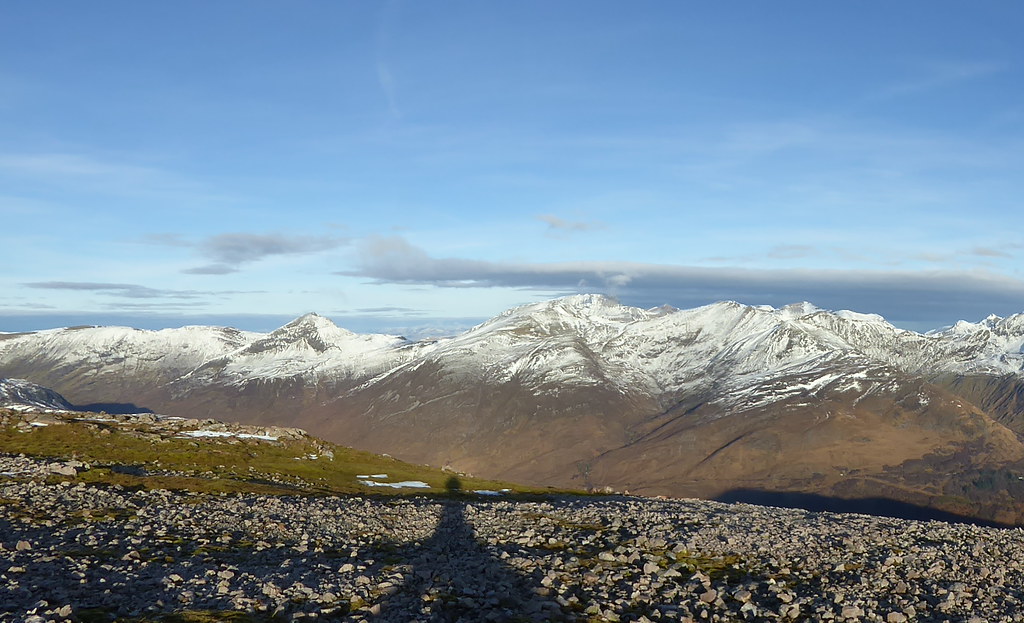 With Ben Nevis looming over them. 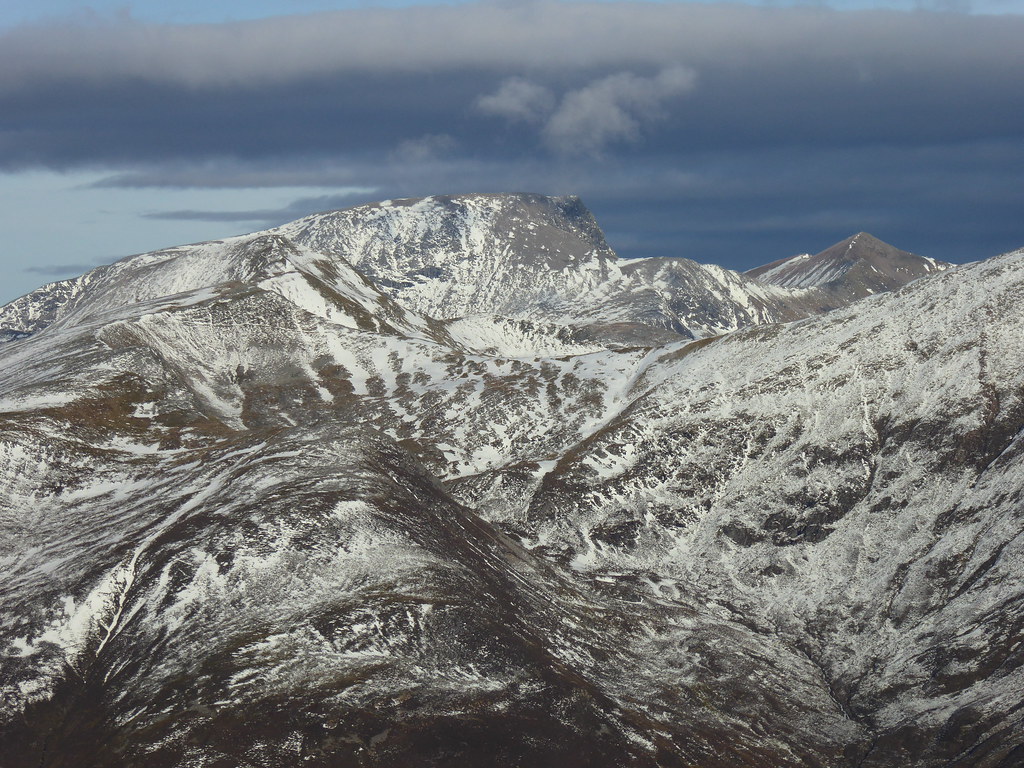 To the south the jaggedy Aonach Eagach ridge loomed nearby with the other Glen Coe hills behind.  It is possible to make a route on to this crinkly crest from Garbh Bheinn.

But perhaps the best view is just below the summit, looking west to the Ballachulish narrows and the Pap of Glencoe. 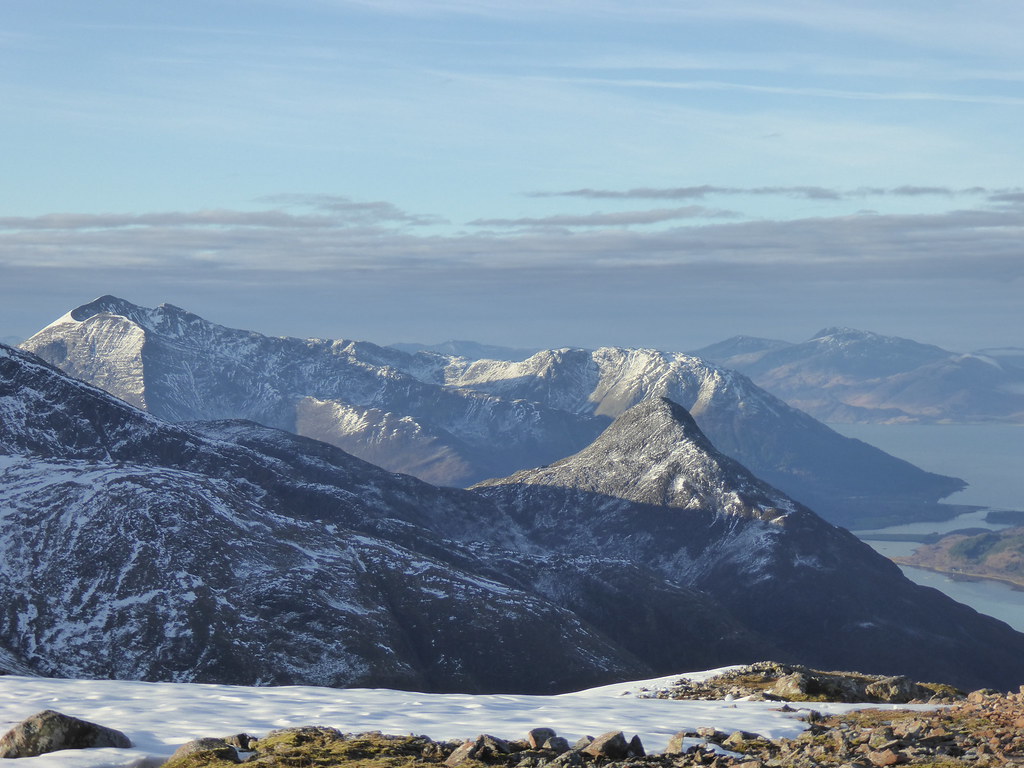 The low light was just wonderful and the air had that clarity that only colder months can bring.  Down below on Loch Leven a small boat was gliding towards Kinlochleven leaving a wake in its trail.  1hr 50minutes up and 1hr 20minutes down.  Towards the bottom I met a couple, the only people I would meet on the hills this day.  Back at the car I ate some food to refuel before driving around the head of the loch at Kinlochleven and along its north side to just short of Callart House.

Again, there is parking by the side of the road.  Time was running short at this time of short daylight hours.  I was in two minds as to whether to continue up Mam nan Gualainn.  This Corbett forms a 6km long ridge with a lower top, Bainn na Cailleach, almost 3km to the east.  A decent traverse can be made from Kinlochleven, first using the West Highland Way, and descending the way that I was to go up.

There is a path which ends up going around the back of the Corbett that I followed, first through some woodland and then soon up into the open hillside.  The path is occasionally wet and coincided with ATV trails.  As I climbed I had a good view of Garbh Bheinn that looked a bit like an appendage to the Aonach Eagach ridge. 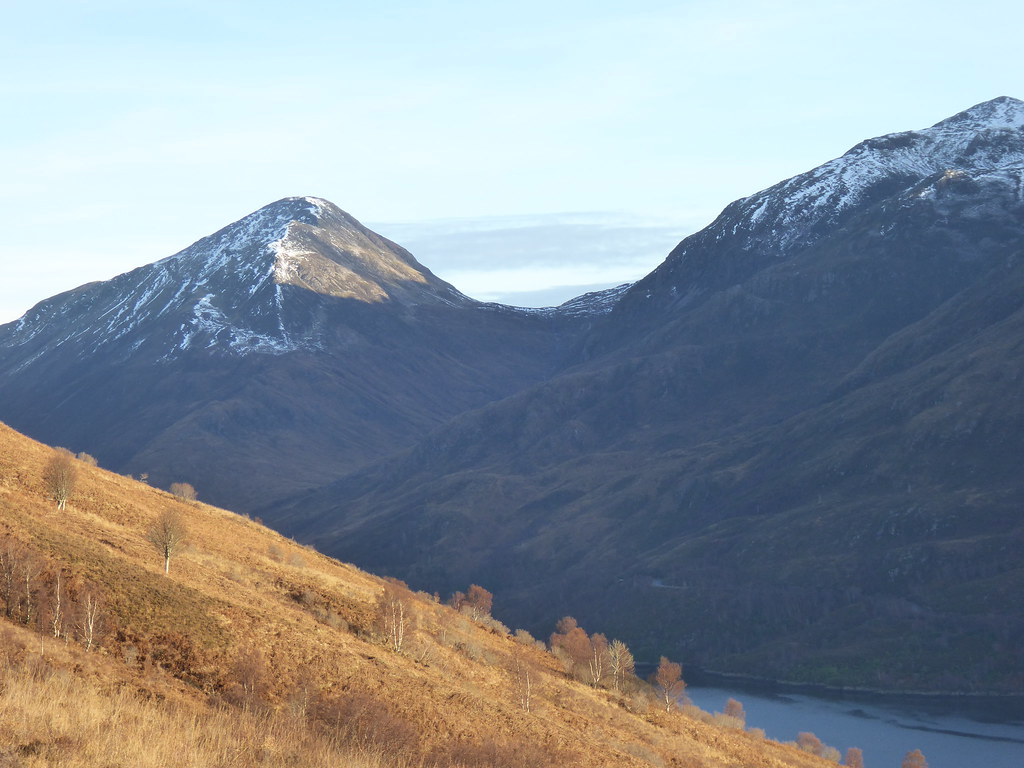 Just before the path crested the col ahead I veered to the right and climbed 200m of steep grassy slopes.  The gradient eased, there was a fence and a bit of a path.  I went through a gate in the fence.  The top was in view and I was soon there.

Again the views, and the light, were outstanding.  The Mamores stood to the north.

And the sun was beginning to set over the Ballachulish Munros. 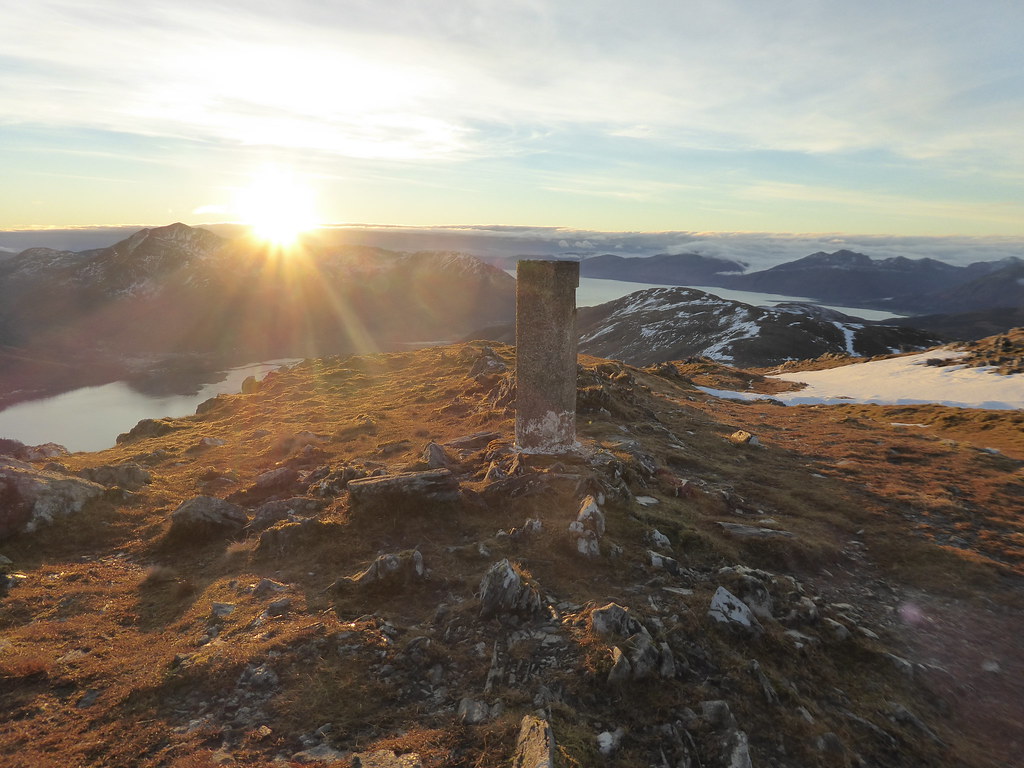 I waited as long as I dared watching the sun go down.  The Mamores glowed. 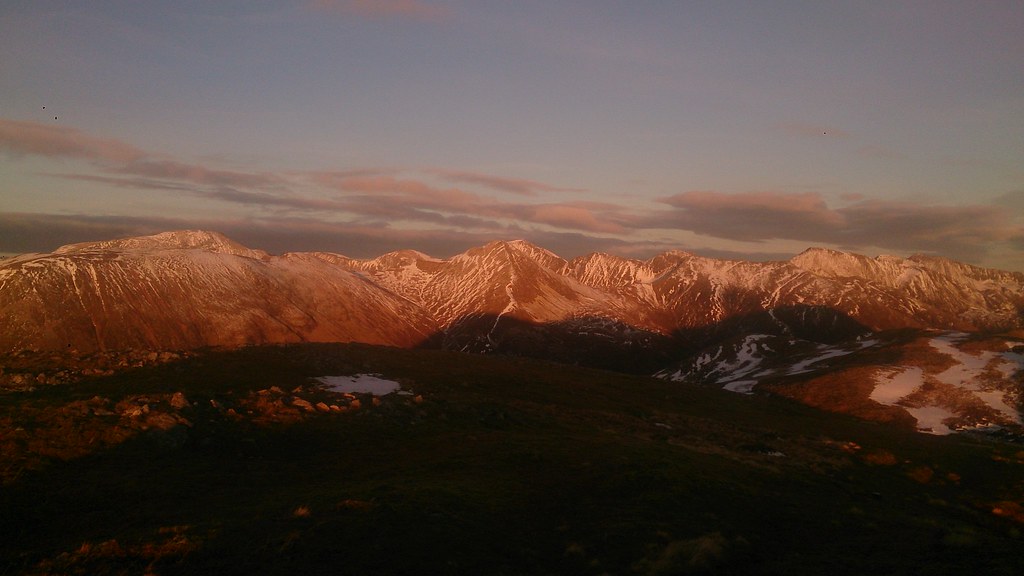 I hurried down.  The sun disappeared but the clouds went red; the hills were silhouetted. 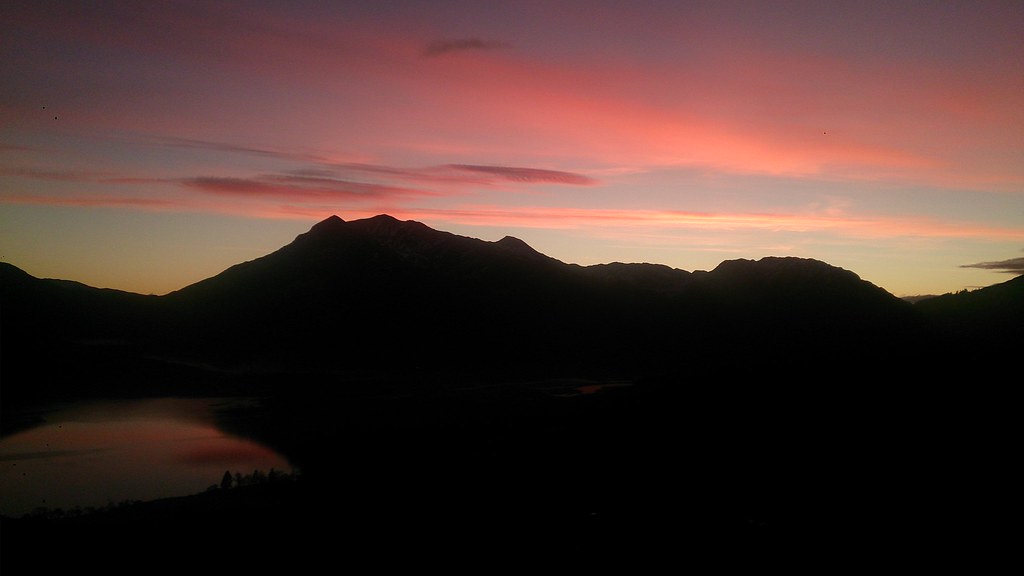 It was dark by the time I was back at the car but I had not needed my head torch.  There was enough light in the sky to walk by.  And I did not feel too bad after my 1700m of climbing.  Plus an inversion and Brocken Spectres one day and amazing light and atmospheric clarity the other.  What a weekend.