The previous day Jet and I had walked a superb horseshoe route down in Morvern (Creach Bheinn and co).  We then spent the night at an almost deserted campsite in Strontian, well positioned for this climb.  Sgurr Dhomnhuill is the highest peak in Ardgour.

We were up promptly.  I had to shake down a dew covered tent which I then did not bother to try to stuff back in its bag.  I prepared myself some porridge and had a flapjack.  The weather was stunning.  The sheet of high grey cloud that had been present the previous day was gone.  In its place there was an almost cloudless blue sky.

From the Strontian side there are a couple of places where this climb can start.  The first is from a Forestry Commission car park at Ariundle just a couple of kilometres up the glen.  The second is to go a further 4 kilometres up to a high point on the road and to tackle Sgurr Dhomhnuill along its west ridge.  The latter route has some mild scrambling near the end.  With the dog I therefore decided on the former option.

The Forestry Commission car park is large and ours was the only car there as we left at around 8.15am.  The walk up through the ancient oak woodlands was a delight.  Sunlight dappled the ground.  The leaves on the trees were just starting to turn and a track eased the gradient as we gradually gained height. 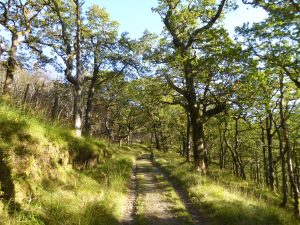 There are a number of low level walks here and part of the woodland is a National Nature Reserve.

We ignored a couple of side paths and passed through a couple of gates.  The vehicle track became a path but the walk remained a delight.  Just before we emerged from the woodland, we crossed a rickety bridge over the Allt Ruighe Spardail, a bright sparkly flow on this morning.

Ahead the interest continued.  Sgurr Dhomnhuill came into view, still disconcertingly far away. 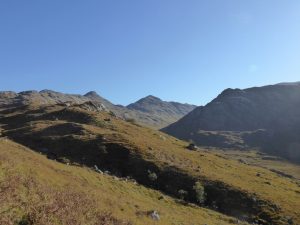 And the reason for the good track.  The remains of lead mine workings are to be found up here.  Their presence will gradually merge into the landscape.  But for the moment the spoil heaps remain as testament to man’s intrusion into this environment. 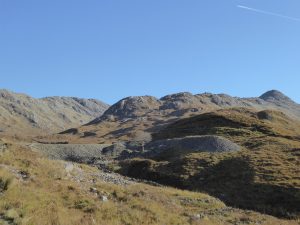 Now choose your route.  The target is the west ridge of Druim Leac a’Sgiathain (a bit of a tautology as Druim means ridge in Gaelic).  You can either cross the stream at the first workings, or there is a path (occasionally boggy, but clear) that follows the stream up higher.  In either case there is a kilometre or so of fairly rough, boggy terrain to cover before the ridge becomes more delineated.  I chose the latter (which might be a necessary option of the stream is in spate in any event).

As you get higher you make your way around craglets and on the ridgeline a path begins to form.  The ridge undulates and there are good views to the neighbouring Corbetts of Sgurr a’Charrainn and Beinn na h-Uamha.

The next target was Sgurr na h- Ighinn, a significant top.  It is possible to by-pass this top on its north-west side.  This we duly did, following deer tracks before dropping down to the col between it and Sgurr Dhomnhuill.  Here is Jet before the traverse with Sgurr Dhomnhuill behind. 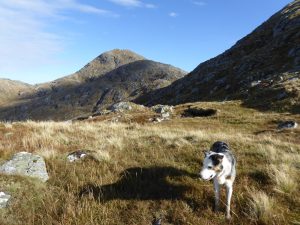 And then a view back along the ridge with a distant Garbh Bheinn (the highest point hereabouts). 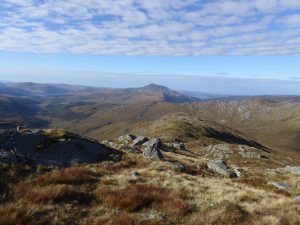 We stopped at the col for something to eat.  There is a final climb of just shy of 200m from here.  There was a slight breeze here.  But it was pleasant looking at the views to the north-east.  Familiar mountains, some not visited for many, many years took on a different aspect from this viewpoint.  But there was no doubting the sight of Ben Nevis, standing proud of everything around it and with its own cap of cloud.

After 15 minutes we set off up.  I was feeling good even after the previous day’s exertions.  The climb went quickly with some weaving around rocky sections.  The view from the top was just stunning as might be expected from this (in UK terms) super prominent peak. 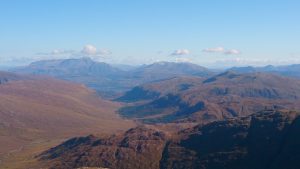 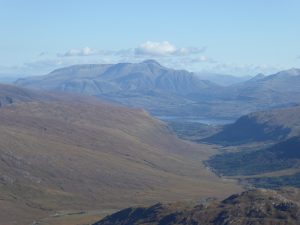 Garbh Bheinn zoomed in the opposite direction. 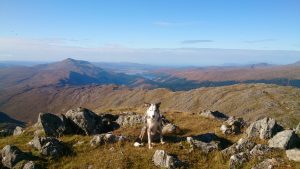 The view to the north-west including a faint Skye. 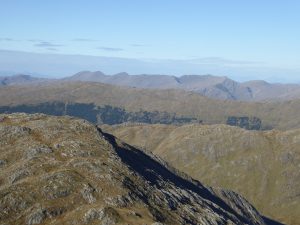 And here is a video panorama that I took.

It was too good to leave.  So we didn’t!  We had some more to eat as I took in the views.  I saw two people on Sgurr na h-Ighinn.  40 minutes later they had joined me on the summit.  They were as enthusiastic at the views.  The corries were echoing with the sounds of the rut.  It was now towards the end of the season and, being a Sunday, the deer were safe today from the stalker’s cross hairs.

We left them to lunch after a chat.  They had the Creach Bheinn walk planned for the next day.  We were soon down at the col and I decided not to avoid Sgurr na h-Ighinn on the way back.  It was a good move because the top here is an equally good viewpoint.  Sgurr Dhomnhuill is particularly fine from here. 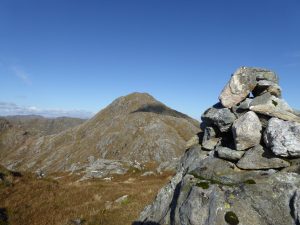 The entrance to Loch Leven could be seen with Ballachulish Bridge with Bidean nam Bian and the Buachaille behind. 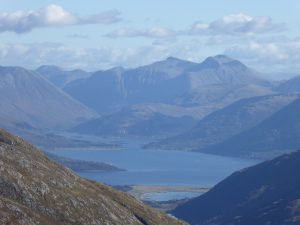 And there was Ben Nevis again. 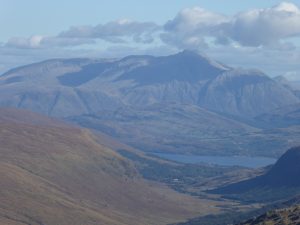 It was then back the way we had come.  I aimed to a point slightly further up the stream to reduce the distance over the rough ground.  It was not actually too bad and the stream crossing was easy.

There was a smattering of a path, quite muddy at this point.  We met an elderly couple with a pair of dogs, one quite young.  They were out looking for deer.  I did wonder later whether they might have been the estate owners.  We had a bit of a natter about the deer and where I had been.  And then it was back to the yomp to the car.

The light picked out the mine workings in a slightly different way. 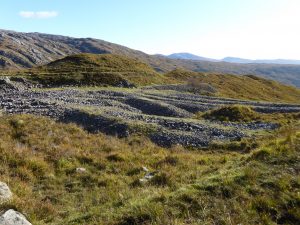 The woodland was as delightful as before. 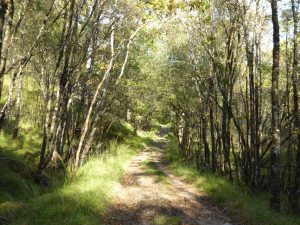