The areas of Morvern, Ardgour and Moidart lie in a wild area on the west coast of Scotland.  They are moated by Lochs Linnhe and Eil and by the sea.  Land access is from the north along the road to Skye.  Though coming from the south, as I did, it is possible to take the Corran Ferry across the Loch Linnhe narrows just north of Ballachulish.

Because there are no Munros in these areas Morvern, Ardgour and Moidart tend to be slightly less frequented by hill walkers even though the honeypot of Glencoe is not far away if the ferry is taken.  My first hill walking visit, to Moidart, was just last year.  Jet and I then did a short backpacking trip over two days including a summit camp in great June weather.  Before then, many years ago, I had visited Ardnamurchan Point (which is the furthest westerly point on the mainland of Britain) with the rest of the family whilst staying at self-catering accommodation opposite Fort William– but that has been about it.

So I felt it was about time for a further explore.  I was also doing this because there are (for the UK at least) some fairly prominent hills here that I was interested in, over 600m in fact, and it would be useful for my general fitness in preparation for my Antarctica visit.

So first in early October I did a wonderful horseshoe walk covering Beinn na Cille, Fuar Bheinn and Creach Bheinn, the last of these being the highest at 853m.  With a sea level start the total round involves around 1,430m (4,000ft) of ascent.

The start point is Glengalmadale and there is a plenty of parking by the bridge over the river.  The road down from the junction with the Strontian road is quite exciting in places – just a car’s width and teetering over the sea on one side.  I spent that section hoping that I would not meet a vehicle coming the other way.  It would not have been fun trying to reverse on that road as there was a distinct lack of passing places.

Dropping down to Glenglamadale there was a sign by the road indicating that I was entering the Glengalmadale Estate and that stalking activities were likely to be occurring.  So I tried both numbers given on the sign but only got through to voicemail.  Oh well, I had tried!  Jet and I would just have to duck any passing bullets.

We were soon ready, under the suspicious gaze of a lady from one of the nearby cottages.  We crossed the bridge and carried on a short way along the road towards an obvious plantation.  Here we made our way up steep, rough ground.  It would have been much worse in wet weather.  Plants of various descriptions attempted to catch my ankles or hide rocky traps.  I was soon working up a bit of a sweat.

The slope did not really relent even once we were above the plantation.  The trace of a trail that there had been by the trees disappeared, or I lost it.  I trended to the left to ease the gradient and to avoid a rocky area above.  In the end I probably went too far to the left.

The ground remained rough as we gradually gained height.  The rut was in full swing. The roars of the stags echoed around the hillsides.  We spotted a few hinds.  Jet was uninterested.  The broad ridge line was now up to our right and I made my way in that direction.  Soon after hitting it we were climbing the final slopes to the summit of Beinn nan Cille at 652m.  This hill is a Marilyn which means two things.  First, it falls within another classification of Scottish hills, the Grahams, being hills between 621m and 762m (2,000ft and 2,500ft in old money).  Second, as also required by the Graham classification, it had a prominence of at least 150m (or 500ft or near enough).  Therefore we were going to lose a lot of height before tackling the next hill.

Above us there was a sheet of thickish grey cloud which made the light flat.  But there was not much of a wind and the views were still good. 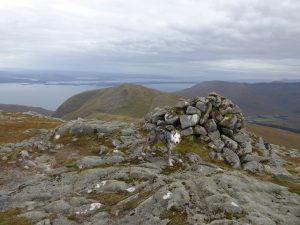 This was the view looking south over the entrance to Loch Linnhe and towards Mull with Jet blending into the background.  Next is the view onwards towards the second hill of the day, Fuar Bheinn at 766m. 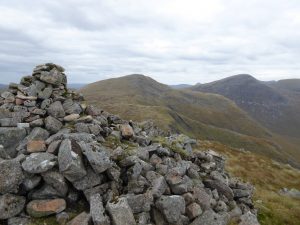 And finally across the trench of Glenglamadale towards a distant Ben Nevis and, nearby, the ridge we would later be using for our descent. 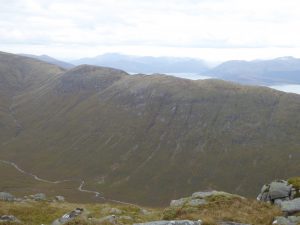 So we did not stay long and started our descent towards the col with Fuar Bheinn.  About 100m before we reached it, a lone stag came up from the west.  He hesitated on the col and looked up towards us.  We had stopped to look at it.  Jet was quite curious but did not move.  After 30 seconds or so of mutual eye-balling, the stag continued on his way down into Glenglamadale.

The 200m of vertical ascent up to Fuar Bheinn (Cold Hill) went by in short order.  The views were no better here as some of the seascape was lost, but it was nice looking towards Creach Bheinn and, behind it, Garbh Bheinn (the highest peak around here). 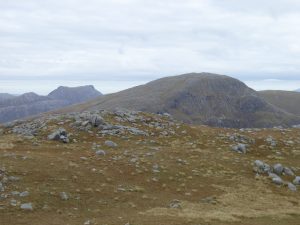 The way on from Fuar Bheinn required us to swing around to the north-west in order to avoid very steep ground on the direct route.  Then we descended east to reach the bealach.  This bealach is supposed to be boggy, but after the dry autumn it was not bad at all.  There was then another 200m climb up to the summit of Creach Bheinn (Hill of Plunder) at 853m.  This hill has a prominence of 755m.  With prominence tends to come good views.

Here is a view of the way we had come on the final rise to this summit.

Ben Cruachan rose in the murky distance to the south east. 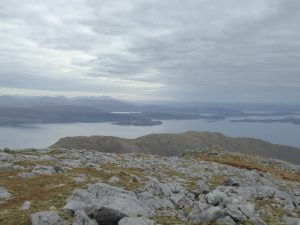 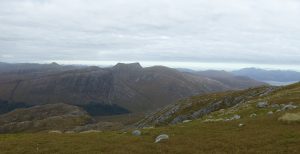 And Ben Nevis was not so far away.  On the horizon to the west, Mull, Rum and (just about) Skye could be made out.  So throughout 360 degrees there was a vista of mountains and lochs.  We enjoyed this whilst consuming some lunch. 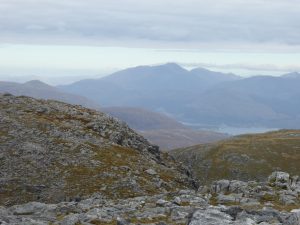 I had noted that there is a feature marked “Camp” on the Ordnance Survey map.  In the dip immediately to the east of the summit there are remains of walls of what was a “Coby Camp”.  These were buildings used by the OS map makers of the 19th century.  The remains were obvious. 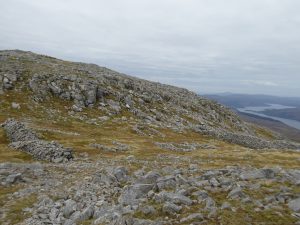 Another climb took us up to a subsidiary top, Maol Odhar, where its cairn was festooned with some plane wreckage from a USAF F-101 that exploded over the mountain in 1964. 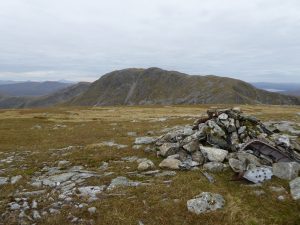 Now we descended the ridge on the other side of the horseshoe making sure we did not get drawn down the south-east ridge.  There were still sheep high up.  They scattered as we went by.  And we saw more deer, but heard no gunshots.  The ridge was bumpy over Meall nan Each (Hill of the Horse) and a myriad of other knolls. 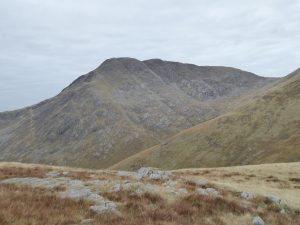 A path we were following disappeared into the bracken that clothed the lower slopes.  Before then, Jet took the opportunity of taking a quick dip. 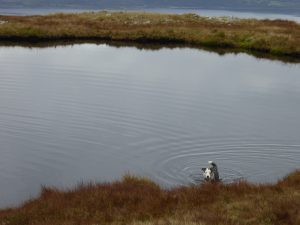 We battled down through the bracken back to the car.  A round of just over 6 hours.  The following day we would tackle another prominent peak, Sgurr Dhomhnuill in Ardgour.